The Truth About the Ruins in East Fairmount Park 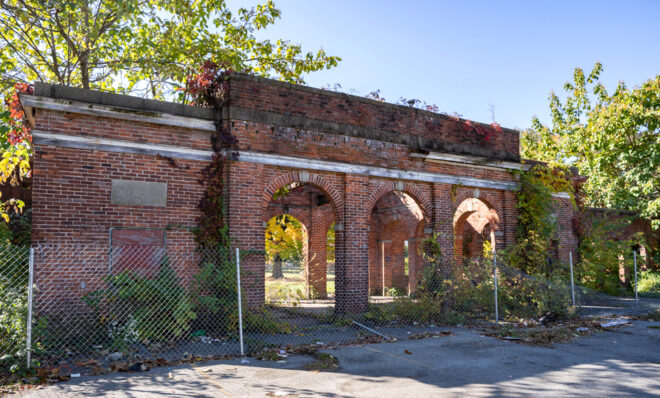 Despite its reputation, these arched brick ruins across the street from the Dell Music Center are not the old Strawberry Mansion Music Pavilion. It is a restroom complex built in the 1930s on the foundation of the former venue. | Photo: Michael Bixler

Before the Dell Music Center, Fairmount Park offered musical entertainment with its own orchestra at three venues located at Strawberry Mansion, Belmont, and Lemon Hill. The Strawberry Mansion Music Pavilion was the last of these early venues to be created. It delighted attendees from 1905 until 1930 when the pavilion was replaced by Robin Hood Dell, the former summer home of the Philadelphia Orchestra.

A photograph of the Strawberry Mansion Music Pavilion from the August 26, 1906 edition of the Public Ledger. | Photo: Newspapers.com

The venue was located across Strawberry Mansion Drive and its lawn facing the Dell has since been paved over. Just south of this parking lot are the ghostly, brick remains of a derelict building which many assume is the original music pavilion. It is not. These are the remains of a 1930s Works Progress Administration structure that provided restrooms for the Dell until the 1980s. It was built on the foundations of the original pavilion. 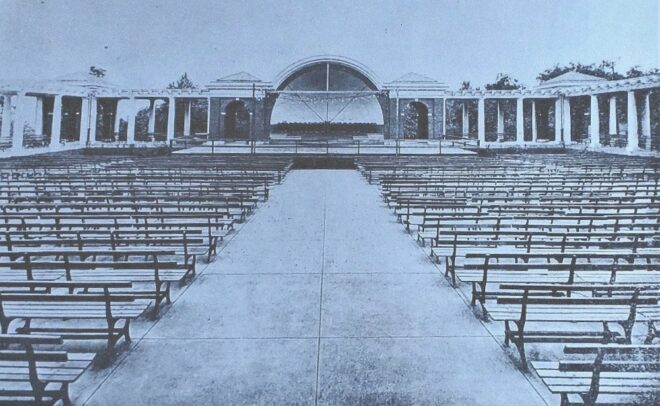 This photograph of the interior of the old Strawberry Mansion Music Pavilion shows the venue’s seating with a capacity of 3,000 guests. Date unknown. | Image courtesy of Philadelphia Parks & Recreation

The Strawberry Mansion Music Pavilion was designed in 1905 by Horace Trumbauer. It was constructed on the grounds of Strawberry Mansion, built in 1798 by Judge William Lewis, a friend of George Washington and Benjamin Franklin. The choice of Strawberry Mansion’s site for a music venue reflected recent transportation improvements that greatly improved the site’s accessibility.  Philadelphia’s population had nearly doubled between 1870 and 1900 to 1.3 million, and much of the city’s new housing was being built in North Philadelphia. Public transit had been greatly improved by the substitution of electric trolleys for horse-drawn ones that occurred soon after Philadelphia hosted the International Electrical Exhibition of 1884, with Lehigh Avenue nearby being among the first streets electrified. However, what added to Strawberry Mansion’s appeal was the development of the Fairmount Park Transit Company’s (FPTC) electrified rail line running across the park from a terminal at 33rd and Dauphin Streets, over a bridge high above the Schuylkill River, and through the countryside to Woodside Park, which was located just outside Fairmount Park on Ford Road. While Woodside Park was the line’s primary destination, it also had a station at Strawberry Mansion. 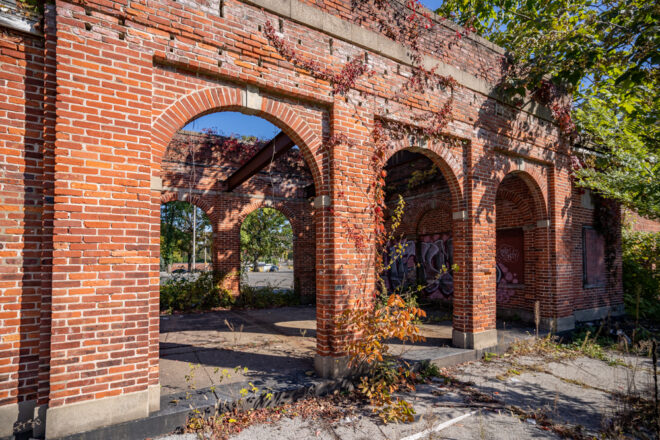 Enclosed restroom facilities were built at either end of the arched complex. | Photo: Michael Bixler

Woodside Park was one of those popular turn-of-the-century pleasure palaces that transit companies developed to spur ridership, particularly on Saturdays. Another local example is Willow Grove Park. Neither Woodside Park nor the trolley were allowed to operate on Sundays in deference to Pennsylvania’s blue laws, which prohibited any public work or group activities other than religious services. FPTC proposed constructing the rail line in 1894 and was given a two-year construction schedule by the Fairmount Park Commission (FPC). The FPTC would build an entirely grade-separated right of way and include vehicular traffic lanes on its bridge. The trolley line and the amusement park opened for business in the summer of 1897.  The line operated 50 open cars and 10 enclosed ones, all acquired from Philadelphia’s J.G. Brill Company. 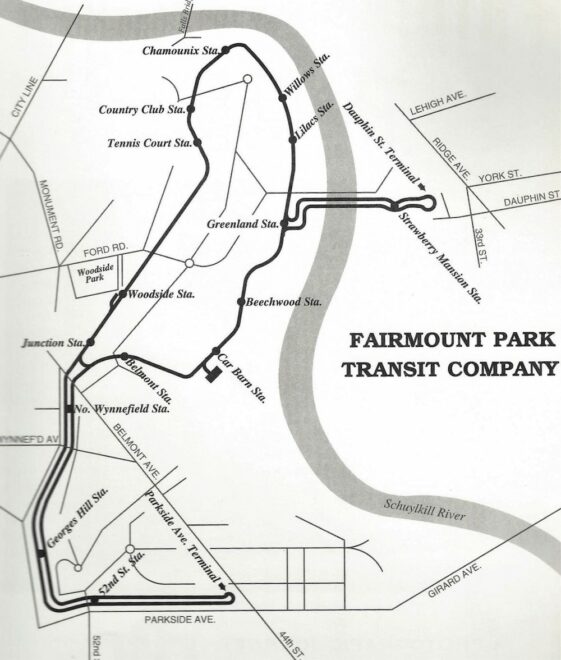 Even before the creation of Woodside Park, the FPC was interested in providing wholesome entertainment to Philadelphians as an alternative to drinking and gambling. It had established music amphitheaters in a tent at Lemon Hill in East Fairmount Park and at Belmont in West Fairmount Park, providing a small covered bandstand around which attendees could sit on the grass. For music, the FPC created the Fairmount Park Band in 1898 under the baton of conductor Adam Jakob. The group played popular fare and light classics. With the addition of the Strawberry Mansion Music Pavilion, Jakob and his wind orchestra performed afternoon and evening concerts at Lemon Hill on Mondays and Thursdays, Strawberry Mansion on Tuesdays and Fridays, and Belmont on Wednesdays and Saturdays. 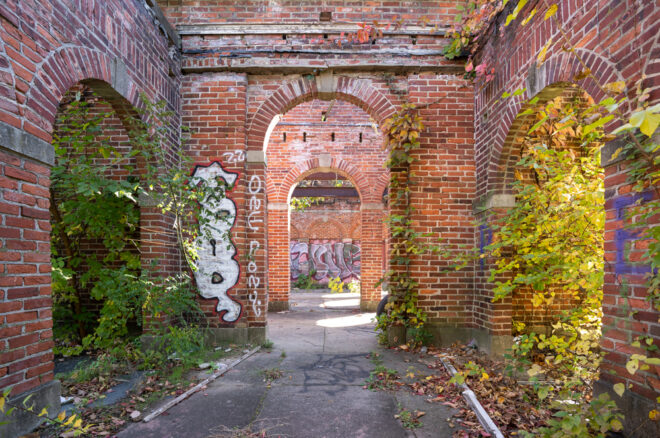 The Robin Hood Dell restroom complex was built in the 1930s by the Works Progress Administration and were used until the 1980s. | Photo: Michael Bixler

The Strawberry Mansion venue benefited from public transit access for people from all over Philadelphia. At the nearby Dauphin Street Terminal at 33rd Street, a route from South Philadelphia and two routes from Kensington ended. The Lehigh Avenue line three blocks away and lines on Ridge Avenue stopped there as well. The pavilion’s 3,000 bench seats were usually fully occupied. 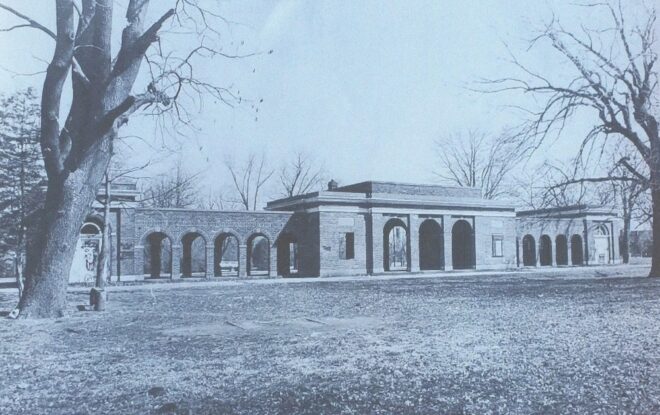 The restroom complex in 1937. | Image courtesy of Philadelphia Parks & Recreation

The Strawberry Mansion Music Pavilion may have been a victim of its own success. The Philadelphia Orchestra, under Leopold Stokowski, wanted a summer venue, and the pavilion’s seating capacity was inadequate. Stokowski convinced the Fairmount Park Commission to build a new venue, Robin Hood Dell, just across from the pavilion in a natural amphitheater overlooking the Schuylkill River. The Dell was completed in 1929, and its first concert on July 8, 1930. The new venue had a 6,000 seat capacity and quickly attracted crowds. The pavilion was rendered obsolete and was demolished soon thereafter. 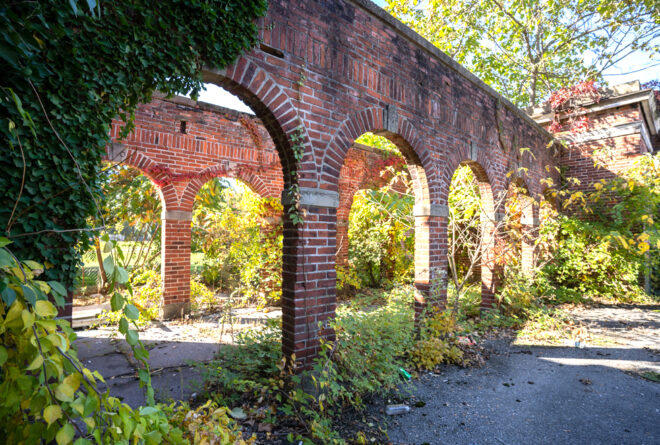 With the arrival of the Great Depression, the federal government initiated make-work projects to provide jobs for the unemployed. One of many such projects in Philadelphia was the construction of the restroom building that still exists on the edge of the Dell’s parking lot. It was constructed on the foundations of the original pavilion band shell. The restrooms were closed in the early 1980s. Various ideas have been floated for the structure’s adaptive reuse, one being an environmental center. Today, it appears relatively stable, but is being reclaimed by nature and quickly falling into ruin.