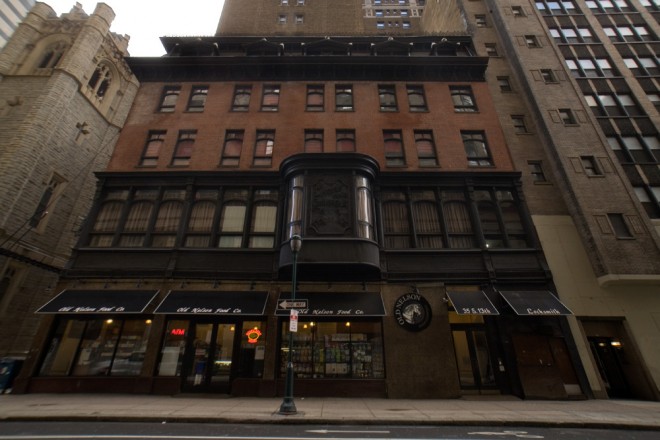 You could be forgiven for not noticing the bas-relief signboard advertisement in a second floor window bay over the Old Nelson’s Deli at 13th and Chestnut. Painted entirely black, it stands out only with a strong dose of sun, a rarity indeed this long winter in Philadelphia. But viewed from the right angle on the right day, curving letters emerge to advertise the “Ladies’ and Children’s Hair Dressing” once available here. The understated building, which capitalized on its location across the street from famous Wanamaker’s, came about in 1887 by Richard Binder, a man with claims to fame as a hairdresser, businessman, Civil War veteran, and Medal of Honor recipient. 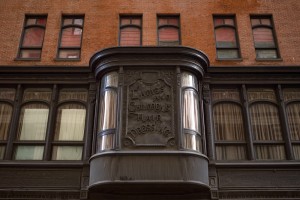 Zoomed in for the money detail | Photo: Bradley Maule

Born in 1839 in Würtemmberg, Germany, Binder immigrated to the United States in 1854, landing in New York before eventually relocating to Philadelphia, where he applied for citizenship in 1860. When the Civil War broke out less than a year later, Binder enlisted in the Marine Corps from Pennsylvania on July 11, 1861. He eventually rose to the rank of Sergeant, serving on a ship that sank during the Battle of Port Royal in November 1861. For the next three years, he was involved in various naval battles, and from 1864 to 1865, he was assigned to the USS Ticonderoga.

During his tenure on the Ticonderoga, Binder took part in the First Battle of Fort Fisher on December 24-25, 1864, and the subsequent Second Battle of Fort Fisher on January 13-15, 1865. These assaults by the Union Army, waged off the coast of North Carolina, sought to capture Wilmington’s Fort Fisher, the last major coastal stronghold of the Confederate Army and a key port for Confederate blockade runners. After being rebuffed in the First Battle of Fort Fisher, in which eight men were killed when a 100-pound Parrott rifle exploded, the Union Army was successful in their second offensive three weeks later. For more than two days, the army besieged the fort in overland and naval attacks, including several hours of hand-to-hand combat as Union troops advanced. Finally, on January 15, 1865, crewmembers from the Ticonderoga landed at the fort, capturing the seaport for the North and severing the South’s transatlantic supply routes and any hope for support from Europe.

Over 1,800 men were killed in the Second Battle of Fort Fisher, including 583 Confederate troops and 1,341 Union soldiers (200 of whom were killed when a magazine exploded on January 16, after the North had already claimed victory). Binder himself narrowly escaped that explosion and later received a Medal of Honor, together with ten Ticonderoga crewmates and 40 other soldiers, sailors, and Marines. His citation read: 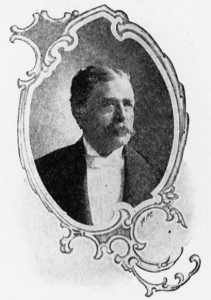 Medal of Honor portrait of Sergeant Richard Binder, USMC, taken some 40 years after his Civil War service | Image via Wikipedia

Despite heavy return fire by the enemy and the explosion of the 100-pounder Parrott rifle which killed 8 men and wounded 12 more, Sgt. Binder, as captain of a gun, performed his duties with skill and courage during the first two days of battle. As his ship again took position on the 13th, he remained steadfast as the Ticonderoga maintained a well-placed fire upon the batteries on shore, and thereafter, as she materially lessened the power of guns on the mound which had been turned upon our assaulting columns. During this action the flag was planted on one of the strongest fortifications possessed by the rebels.

Although he was awarded the Medal of Honor on June 22, 1865, a ceremony to honor the recipients was not held in Philadelphia until the 1890s, by which time Binder had achieved fame in quite another professional sector. In the years before he enlisted, Binder had lived in Kensington with the family of Francis Schmidt (a fellow German immigrant), and both men worked as barbers. After his discharge from the army in 1865 and his marriage in 1868 to Friedericke (who was also from Würtemmberg and immigrated to the United States in 1860), Binder returned to his pre-war work cutting hair.

Over the course of the 19th Century, hairdressing shifted from a service in the home to a formal profession with commercial locations, and Binder’s business success reflected the increasing professionalization of the industry. By 1867, he worked in a shop at Seventh and Chestnut Streets (currently the site of LaScala’s restaurant), and in 1872, he opened a second location at the Bingham House Hotel at 11th and Market Streets, catering to the hotel’s guests. Ten years later in 1887, he operated a third location at 29 S. Eighth Street (on the site of what is currently a vacant parking lot). That same year, he commissioned the shallow, five-story building at 35 S. 13th Street (architect unknown), opening it for business a year later. 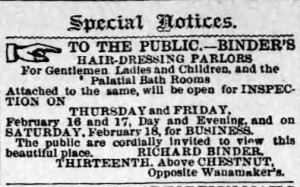 Shave and a haircut, right this way, next to Wanamaker’s | Circa-1888 ad in The Times-Philadelphia

On February 13, 1888, Richard Binder placed an ad in The Times-Philadelphia inviting gentlemen, ladies and children to visit his new “hair-dressing parlors…and the Palatial Bath Rooms Attached,” highlighting its location across the street from Wanamaker’s. The newspaper ran an article the next day to mark the opening of the “elaborate tonsorial establishment” that it called “the handsomest barber-shop ever fitted up in this city.” The building included a barbershop at the first floor, a second-floor salon for women and children (a fairly new out-of-the-home concept), and lodging rooms for “bachelors and widowers” on the upper floors. Its glass chandeliers and candelabra, tiled floor and glazed brick walls, heavy French plate beveled mirrors, spiral staircase, and velvet carpets were all eagerly announced as a “marvel of magnificence.”

The actual building features announcements of its own, including the pressed-tin lettering in the second floor window-bay, as well as signboards between the first and second floors that read “Binder’s, Wig and Toupee Maker” and “Hair Cutting and Singeing.” (“Singeing” was used to remove frayed ends and seal the hair after the cut.) It is not known how the lettering was originally finished, but the black-on-black paint is no doubt a recent color scheme for the inscriptions, which would have stood out more when the building opened. 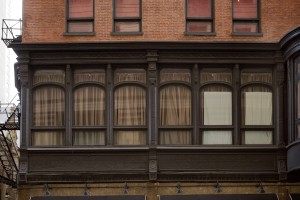 You have to look for it, but the pressed-tin lettering is there, under the windows | Photo: Bradley Maule

Binder himself stood out in late 19th Century Philadelphia, earning prominence for his business’ growing success, which included various hair tonics and ointments of his own creation that he promoted in national publications. He even secured a trademark for Phytalia, a product made of “beneficial vegetable principles” that he claimed could “positively cure dandruff and strengthen the hair” by “mak[ing] vigorous the circulation of the blood in the scalp.” (All this, with just the “faintest, least obtrusive scent”!) Newspapers and magazines around the country used his name in their style sections, sometimes enlisting him to sketch a fashionable women’s hairstyle to splash across a page. His name was valuable in endorsements for products like Meditrina (which he testified cured a woman of a tumor on her scalp), and Wanamaker’s Department Store made sure to mention its sale of Phytalia in its own advertisements.

The success of Binder and Company, and the overall professionalization of hair-cutting, was not without its growing pains, though. New guilds were formed to regulate the profession, using social pressure or more formal means of censure. Among the more self-explanatorily named of these was the Barbers’ Sunday Closing Association in Philadelphia, which in 1889 began to object about the increasing number of shops open on Sundays in violation of the state’s blue laws.

Binder’s shop in the Bingham House was among those that drew criticism, since he claimed that although he was “in thorough sympathy with the Sunday-closing movement,” he decided to remain open to accommodate the hotel’s guests. Binder employed a certain amount of cloak-and-dagger trickery to maintain his Sunday operations and avoid the Association’s “walking delegates.” One newspaper noted that when the head of the Association visited the shop, it was populated only by a shoe-shiner, yet whenever “men with beards of several days’ growth would enter a shop by the private entrance or through the alley, [they would] emerge fifteen minutes later with clean faces.” Eventually, formal charges were dropped and Binder agreed to close on Sundays. The issue—which at times received top-headline status in local newspapers (while updates on Jack the Ripper’s killing spree in London languished below)—does not seem to have damaged Binder’s reputation or social standing for long, as he managed to have two men arrested in 1892 on charges of insulting ladies. By 1893, as Binder celebrated the 25th anniversary of his Chestnut Street shop, the 21st anniversary of his Bingham House location, and the fifth anniversary of his 13th Street enterprise, Richard Binder and Company had grown to 55 employees, including 15 women.

Binder remained in business through the early twentieth century, expanding his hair business from tonsorials to tonics and toupées. He invested in hotel property in Atlantic City in 1897, perhaps with plans to open another shop there, but the Hotel Evard burned in a large boardwalk fire in 1902. Binder died in 1912 and is buried with his wife Friedericke in West Laurel Hill Cemetery. His epitaph commemorates only his military service and Medal of Honor, leaving all mention of his other claim to fame to the signboards on his building on S. 13th Street.