In “Louis Kahn: The Power of Architecture,” The City Is A Muse 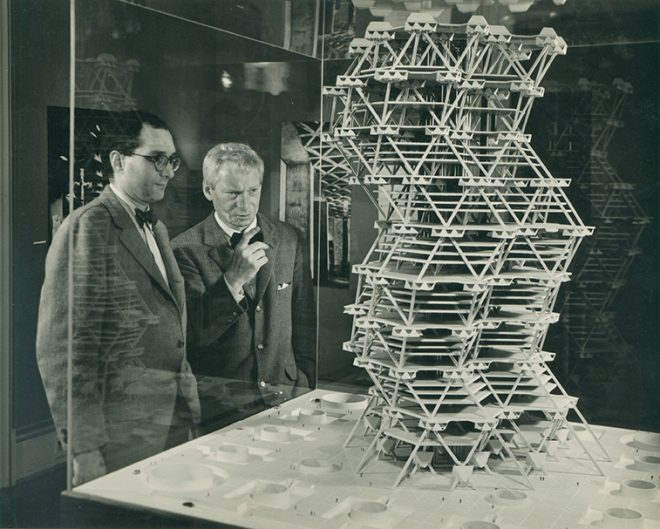 Louis Kahn in front of a model of the City Tower Project in an exhibition at Cornell University, February 1958. | Image: From the collection of Sue Ann Kahn

Starting today, Louis Kahn, who died in 1974 on his way home, returns to Philadelphia in vivid light, the subject of an exemplary show at the Fabric Workshop and Museum. Part-organized by Bill Whitaker, the collections manager of the University of Pennsylvania Architectural Archives, “Louis Kahn: The Power of Architecture” reveals Kahn as an artist of structure, material, and form, a modernist who complicates our understanding of mid-century architecture.

The exhibit, along with a new biography, You Say To Brick by Wendy Lesser, brings Kahn’s deeply normative ideas to our consciousness just as the field of architecture, overwhelmed by concept, struggles for meaning and nuance.

Organized by the Vitra Design Museum in Germany, the show traveled to Rotterdam, Oslo, London, and Taipei before landing in Bellevue, Washington, San Diego, and Fort Worth (at the Kahn-designed Kimbell Art Museum). Philadelphia is the last stop and only east coast venue for the show, on view until November 5.

Museum Director Susan Talbott says she decided to exhibit the show on this 40th anniversary year of the Fabric Workshop because Kahn was an experimental architect, who pursued “trial and error, thoughts coming in the night.” The Fabric Workshop was founded to facilitate experimentation and innovation in art and Kahn, she says, “thought of Philadelphia as a place of opportunity.” 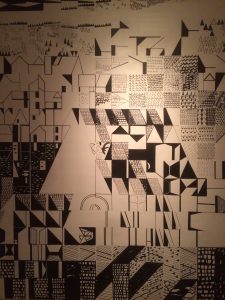 “Louis Kahn: The Power of Architecture” situates Kahn’s inspiration in his Philadelphia immigrant childhood and in the opportunities offered him by the progressive Philadelphia Industrial Arts School and the art department of Central High School. “Philadelphia sharpened his sensibilities,” says Whitaker.

There is much here on Kahn’s work process (including material from a documentary made by WCAU-TV in the 1960s that shows him immersed and enthralled by Philadelphia): his calendar, box of pastels, models, and sketches. But this isn’t social history: the heart of the exhibit is a deconstruction of his sensitivities to form, material, light, structure, landscape, and community that come to vital articulation in the sketches, models, videos, and photographs of legacy projects, including the Yale Art Gallery, the unbuilt Philadelphia City Tower, the Salk Institute, the Esherick House, the Indian Institute of Management, and the Bangladesh capital complex.

The Alfred Newton Richards Medical Research Building at Penn, completed in 1965, is his most significant Philadelphia project, and Whitaker says, what earned him international standing. But generations of confused Philadelphians have wondered why. Unlike other Kahn legacy projects it isn’t obviously attractive and nor has it functioned well. But as Whitaker explains it in “Louis Kahn: The Power of Architecture,” the Richards building, like the Centre Pompidou, is a construction of constructs—a product meant to reveal process, connection, and meaning. Erected in interlocking pre-fab sections, under construction Richards became an architectural spectacle. Among those who showed up in Philadelphia to observe: Yale architecture student Norman Foster, whose Comcast Innovation and Technology Center we’ve all been watching climb into the Philadelphia sky.

“Louis Kahn: The Power of Architecture,” is on view until November 5 at the Fabric Workshop and Museum, 1214 Arch Street.