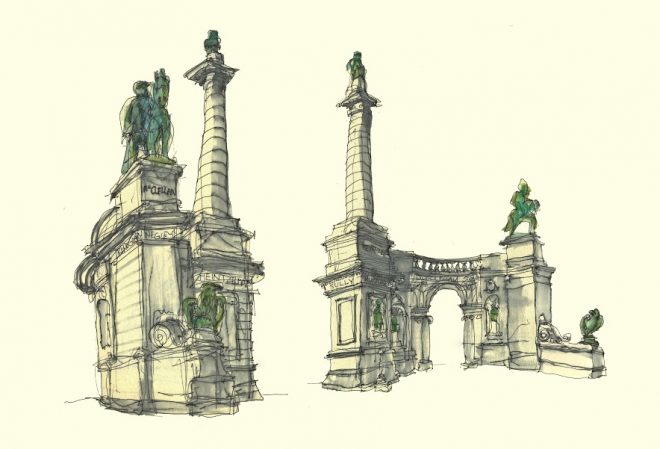 The statues of Civil War heroes Gordon Meade and John Fulton Reynolds rise above the gateway of West Fairmount Park like later-day stylites or pillar-saints, their gazes fixed on the city’s skyline from the tops of the 120-foot Doric columns of Smith Memorial Arch. Down below, on an elegant heap of Beaux-Arts marble designed by renowned architect James H. Windrim, the generals are joined by equestrian statues of their Union compatriots George B. McClellan and Winfield Scott Hancock. Eight bronze busts of various Civil War officers and Philadelphia dignitaries join the committee along with eight allegorical bas-relief angels inside the curving spandrels of the two monumental archways and two large eagles flanking the base. At right, the full-torso bronze portrait of a millionaire, Philadelphia type founder Richard Smith, in a humble printer’s smock peers through a loupe at a small piece of lead type. Type casting was the root of Smith’s fortune and source of the monument itself, arguably one of the most impressive collections of turn-of-the-century American public sculpture in Philadelphia, if not the nation.

Richard Smith was one of the two Smiths (along with his older brother John F.) represented in the Philadelphia firm of MacKellar, Smiths & Jordan Company, one of the largest American type foundries of the Victorian era. Born in Philadelphia in 1821, Smith spent much of his early career in New York and Europe studying type casting and electrotyping, an emerging technology not unlike a primitive incarnation of today’s 3-D printing. He returned to Philadelphia in the 1840s to work for the Johnson Type Foundry near 6th and Sansom Streets, in the heart of Philadelphia’s burgeoning Printer’s Row. Following proprietor Lawrence Johnson’s death in 1860, Smith and three young associates inherited the firm, renamed it, and led its ascent into the vanguard of American type design. The firm was particularly known for its vast catalogs of eclectic “fancy” typefaces and ornamental borders, those ostentatious bits of filigree so ubiquitous in Victorian-era ephemera. When Smith died in 1894 he left more than a half-million dollars in his will for the construction of a children’s playground in East Fairmount Park (the still-beloved Smith Memorial Playground) and a monument to Pennsylvania’s Civil War veterans in West Fairmount Park. 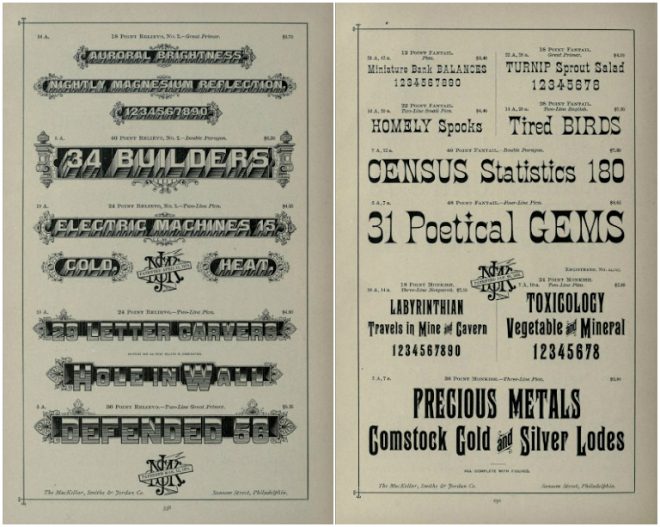 Smith secretly commissioned the monument from his close friend James H. Windrim in 1890, placing a plaster model and specifications for the approved final design in a safe deposit box to be opened at the time of his death. The Fairmount Park Art Association selected the sculptors for the assigned statuary. 14 of the era’s leadings artists were commissioned, including Daniel Chester French, Alexander Stirling Calder, John Massey Rhind, Charles Grafly, Bessie Potter Vonnoh, and Katherine M. Cohen. Work on the monument began in 1898 and was originally expected to take two years, but the last pieces of sculpture were not completed and installed until 1912.

Fairmount Park is an embarrassment of architectural and monumental riches, and most of the park’s historic buildings are listed on the Philadelphia Register of Historic Places, including the Smith Memorial Playground, also designed by Windrim. Yet, the Smith Memorial Arch currently enjoys no official recognition or protections by the Philadelphia Historical Commission, despite its lofty pedigree and even loftier profile.