In This Month Of Jane Jacobs, A Look At The “Philadelphia School” That Inspired & Frustrated Her 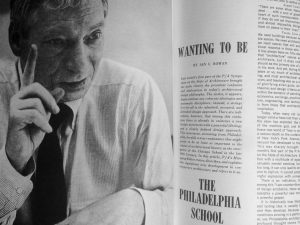 At the end of January, 1961, Jane Jacobs sent the completed manuscript for The Death and Life of Great American Cities, the deeply studied, counter-modern treatise on the value of the traditionally dense and diverse urban street, to her editor, Jason Epstein, and returned to work as a critic at Architectural Forum. That winter, at Progressive Architecture magazine, editor Jan Rowan came to Philadelphia to talk to the architects, city planners, and landscape architects–including Louis Kahn, Robert Venturi, Denise Scott Brown, Edmund Bacon, Lewis Mumford, and Ian McHarg–who had converged on the Graduate School of Fine Arts (now PennDesign) at the University of Pennsylvania. They were in pursuit of “a new kind of architecture” for American cities, Rowan wrote, in an article published in April 1961, 55 years ago. He called their approach “The Philadelphia School.”

Beginning in the early 1950s and into the late-1960s, Jacobs and the members of the “Philadelphia School” would learn from and influence–and frustrate–each other. Far from our sense of the mid-century as a time of uniform modernist ideology, these thinkers and practitioners challenged and exploited modernist ideas of form and function in a careful and contextual way. Jacobs’ path to philosopher king of the city began in learned experience in New York and Philadelphia but also in conversations with Louis Kahn and Edmund Bacon. At Penn, even Lewis Mumford, a competitor of Jacobs for the imagination of the urbanist reader, was as skeptical of the modernist universalism and abstraction as Jacobs was. Far differently from Robert Moses and even Ed Logue in New York (and Boston and New Haven), Philadelphia School members challenged modernist orthodoxy on the path to a finer, more avant-garde, and more humane approach to reimagining the city.

“We absolutely felt we were at the leading school and on the cutting edge. It inspired us to work very hard,” said Richard Bartholomew, an architect and urban designer who entered Penn’s Graduate School of Fine Arts as a student in 1962. In celebration of the philosophy and the accomplishments of the students who trained in the Philadelphia School, Bartholomew, who as a principal of Wallace Roberts and Todd was responsible for the master plan of Liberty Place and the Central Delaware Vision Plan, has organized the exhibit “A Philadelphia School Story: A Half Century Legacy of Planning and Design Practice,” at the Athenaeum of Philadelphia.

The exhibit puts on display studio assignments (“Design of Mantua East,” for example) and the tools of the design education of the time as well as several of the central texts used in class, including Simplified Design of Structural Steel, Simplified Design of Reinforced Concrete, and Environmental Technologies in Architecture. Here we get a glimpse of the persuasive and subtle force of modernism in design education in the early 1960s. One of the key, but rather unknown, members of the faculty, the exhibit tells us, was G. Robert le Ricolais, whose innovative work sought structures of “zero weight, infinite span.”

But the program’s faculty and students, Bartholomew said, sought a “different sort of modernism (and later post-modernism), with an emphasis on the nature of materials, the expression of how the building is made as a means for providing details that were not ornamental in the traditional sense, and the expression of place and context in the building.” 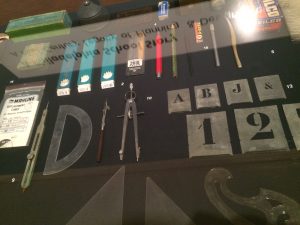 Tools of the trade from the Athenaeum’s “A Philadelphia School Story” | Photo: Nathaniel Popkin

This fine-grained Philadelphia approach had caught the attention of Jane Jacobs almost a decade before, when she started at Architectural Forum, according to Peter Laurence, author of the outstanding and illuminating new biography, Becoming Jane Jacobs (Penn Press). Jacobs initially lauded Kahn’s (now demolished) Mill Creek housing project, and was particularly impressed by his Trenton Jewish Community Center bathhouse and Yale Art Gallery. Growing up in Scranton, Pennsylvania, Jacobs, says Laurence, had frequently visited Philadelphia (where her parents had met) as well as New York, developing an interest in city life that led her, naturally, to the most rigorous thinkers.

Jacobs was thoroughly skeptical of modernist architects who valued form over function. “When architecture gets far away from interest in how its used and in the world that uses it, and more interested in itself, then it’s narcissistic,” she told Eve Auchincloss and Nancy Lynch in the October 1962 issue of Mademoiselle. In honor of the centennial of Jacobs’ birth, Melville House Press republished the interview last week in a new volume, Jane Jacobs: The Last Interview. The book also includes a notable 2001 interview between acolyte James Howard Kunstler and Jacobs during which Kunstler asks Jacobs to read aloud from both sweet and saccharine letters about her–and some to her–written by Lewis Mumford.

But Kahn, Jacobs had to believe, was different from Mumford and different from other modernists. In 1960, her employer, Architectural Forum, co-sponsored a conference called “New Forces in Architecture.” Kahn spoke on the critical need for architects to pay careful attention to the function and the quality of the city street, subjects often ignored by modernists. “These streets now, these expressways, are really rivers; they need harbors. And our smallest streets are canals; they need docks,” he said (the speech was reprinted in Louis Kahn: Essential Texts). Kahn pursued an architecture “of the street, of movement,” but also “of stopping, which in itself can be a marvelous architecture,” ideas implicit in The Death and Life of Great American Cities.

Jacobs also drew lessons from Edmund Bacon’s “Philadelphia cure” approach to Urban Renewal, especially in Society Hill, where he sought to preserve the existing scale and fabric of the neighborhood through “medicine” not “surgery.” “What Jacobs did understand, and what made a great impression on her,” writes Laurence, “was that Bacon and Kahn respected the city’s history, its neighborhoods” and they had “personal and intimate understandings of the social life and physical fabric of city neighborhoods.”

In these examples, Laurence draws a clear, and hitherto underdeveloped line between the thinking of both Kahn and Bacon and Jacobs. It was Bacon who said, in 1956, in language Jacobs would adapt in The Death and Life of Great American Cities, “We developed [in Philadelphia] a hypothesis: neighborhoods are dynamic organisms which have within themselves the seeds of regeneration.”

Laurence explains that this theory and the Philadelphia School approach signified the “beginning of the shift away from modernist urbanism.” He goes on:

In the next ten to fifteen years, various aspects of the Philadelphia plan would develop into disciplines and specialties in their own right: community planning, in-fill development, historic preservation, and urban design. 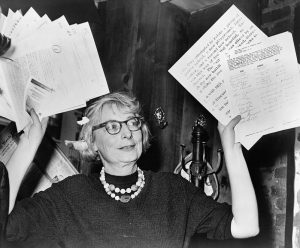 Richard Bartholomew, who graduated with a degree in architecture from Penn in 1965, said the multi-disciplinary approach was filtered through the subject of urban design, a field he helped pioneer at WRT. Everyone took Denise Scott Brown’s “Contemporary Theories of Architecture, City Planning, and Landscape Architecture,” he said. Several classmates went into historic preservation (which was not a separate field at the time) and landscape architecture. The Athenaeum exhibit features the work of about a dozen designers who graduated about 50 years ago, notably the legendary preservation architect Hyman Myers of Vitetta, the landscape architect and co-founder of the firm Andropogon, Carol Franklin, and the late architect Steve Izenour, who joined Venturi and Scott Brown in their firm.

Jacobs’ research and her development as an urbanist thinker and architectural critic had been supported by the Rockefeller Foundation. Beginning with the 1939 New York World’s Fair, according to Laurence, Rockefeller Foundation officials were determined to shape the future of the American city. They underwrote the work of faculty at M.I.T., including the planner Kevin Lynch and the architect Pietro Belluschi, who would soon design the Rohm and Haas Building on Independence Mall. G. Holmes Perkins, dean of the Graduate School of Fine Arts at the University of Pennsylvania, also caught the attention of Rockefeller directors, who saw in Penn’s burgeoning multi-disciplinary program the seed of a new approach.

But after observing the way superblock style housing developments functioned in the late-1950s, Jacobs diverged from even the contextual thinkers at Penn. “The idea of officially lumping all like things together is ridiculous,” she told Mademoiselle. She reversed her position on Kahn’s Mill Creek development and she heightened her critique of city planners–“quite a few people who failed in architectural school,” she called them.

In 1959, Jacobs went to work on The Death and Life of Great American Cities, which remains the single most influential book among students of city planning, especially. Soon after she sent off the manuscript, New York City officials announced an aggressive–“surgical”–Urban Renewal plan for her neighborhood of the West Village. Jacobs set off on the legendary fight that proved her principals of organic urbanism.

Soon, the instinct to fight, to advocate, to defend–grounded as it was in a skepticism of modernism–bled south to Philadelphia. At Penn, Ian McHarg and Denise Scott Brown and others pushed their colleagues into deeper study of social issues and policy related to design. When Philadelphia City officials proposed the Crosstown Expressway that would have eviscerated South Street, Scott Brown helped lead the protest movement. Here was the Philadelphia School doing what Jan Rowan, in Progressive Architecture, had in mind, activating “a powerful new movement with a powerful gospel.”

Scott Brown, who was interviewed in 2012 for the documentary film, “Philadelphia: The Great Experiment,” said of the impact of theory put into practice on the ground in a dense, vital neighborhood almost as legendary as Greenwich Village, “We had the irony of being volunteer consultants, advocate planners, and the theory there in this greatest of planning schools at that time we planners should now hire ourselves out, for free if needed, to be their advocates.”

“A Philadelphia School Story: A Half Century Legacy of Planning and Design Practice” continues at the Athenaeum until May 21, 2016. Admission is free.