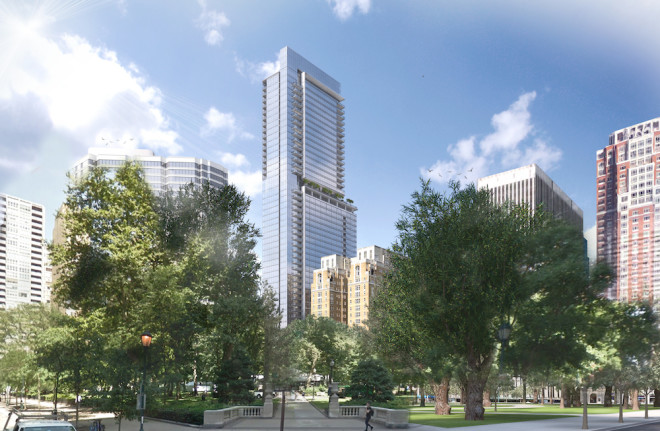 Last Friday, the real estate development firm Southern Land Company released renderings for 1911 Walnut, a mixed-use residential tower it plans to build on the last empty parcel on Rittenhouse Square, a site that has seen several owners and stalled redevelopment attempts over the last 20 years. The firm, based in Nashville, Tennessee, has found itself at the center of controversy after proposing to demolish three historic buildings also on the parcel, including the Rittenhouse Coffee Shop and the Behr Funeral Home. Under protection of the Rittenhouse-Fitler Residential Historic District, the historic buildings can’t be demolished without successfully claiming to the Philadelphia Historical Commission economic hardship. (Read our report HERE.)

A few weeks after filing for economic hardship, Southern Land’s initial plans for the site were leaked to the public by an online architecture forum, Skyscraper Page.

For Southern Land, and for Center City Residents’ Association, the community-based group with the most leverage over the project, this is just the beginning. On December 8th, the real estate firm met with the CCRA for an informational presentation regarding the general nature of the plan. While the firm is roughly a year away from putting shovels in the ground, the design phase is well advanced, and the developers and community are weighing two major design options. 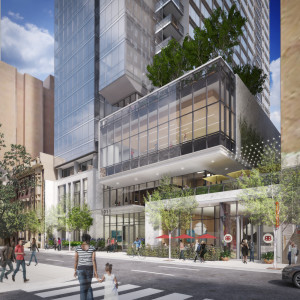 The CCRA appeared generally in agreement with Southern Land’s preliminary proposal. The neighborhood group is sensitive to real estate developers who submit inferior design plans after Pearl Properties and Eimer Architecture presented a lackluster design for the Boyd Theater site, a 26-story apartment tower on the 1900 block of Chestnut Street earlier this year, one block from the Souther Land site. The resulting conflict led to a change in the lead architect, with a group of near neighbors, including residents of 1920 Chestnut Street, The William Penn House, and Rittenhouse Plaza, retaining Cecil Baker + Partners for the new design. Southern Land, by contrast, has engaged the community early, after the site’s program has been figured out, but before designs are final, and firm officials appear eager to establish a design that will work for both the developer and the community. The CCRA has established a task force dedicated to the project.

At the meeting, architect Clara Wineberg of the Chicago-based firm Solomon Cordwell Buenz presented renderings and design details. The firm, which has designed similarly-scaled projects in Chicago, San Francisco and other cities, is the architect of the Summit, a multi-use high rise dorm being completed at Drexel University, at 34th Street and Lancaster Avenue.

SCB is responsible for the design of the 300+ unit St. James apartment tower on Washington Square, completed in 2004. The St. James project combined new construction with historic preservation of the former PSFS headquarters building and York Row 19th century commercial and residential buildings.

Wineberg said the goal of the project would be to exude a “luxurious feel, but warm and gracious.” She spoke of a “subdued elegance,” a descriptor the real estate team routinely used to define the new tower. Preliminary plans include:

The easement, or pedestrian walkway, was repeatedly described by Southern Land representatives as being like a “street,” providing some 50 feet of space between their project’s residential floors and the Rittenhouse Plaza. The word easement confused some CCRA board members who couldn’t locate it at ground level in the renderings. While it is a street of a sort, it is not found on the ground, but up in the air. 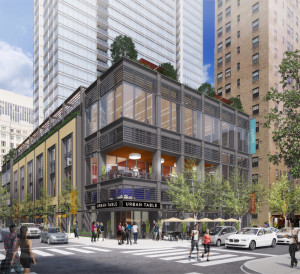 Currently, the firm is considering two major development scenarios: a short project and a tall one. The short plan would still be 559 feet and 49 stories high. The tall project would be a tower 618 feet and 57 stories. Like Pearl Property’s Boyd development across Sansom Street, 1911 Walnut is zoned CMX-4 Center City commercial mixed-use. Both of Southern Land’s scenarios assume an upzoning to CMX-5. In both shadow studies and renderings, the two are effectively indistinguishable, but the shorter building carries the price of forcing mechanicals down into the retail space, making the Sansom Street façade far less interesting.

The current plan calls for a curb cut on Sansom Street. Southern Land has expressed an interest in closing Moravian Street from public use and retaining its easement for service vehicles, installing overhead doors between an internal porte-cochere and the loading zones to either side. Residents are skeptical about this detail. One board member introduced the possibility of just using Moravian Street to access the porte-cochere and thereby eliminating the need for a Sansom Street curb cut altogether, something many in attendance appeared to be in agreement with.

“The reason we can’t solely use Moravian is because it’s too narrow,” was the answer given by a Southern Land representative. He added that the road was barely six feet wide and would barely fit the firm’s own cars, which appeared to contradict an earlier statement that the firm would raise Moravian’s passage anyway, bringing it flush with the curb for trucks using the building’s loading docks along the street.

Southern Land withdrew the hardship application for the Rittenhouse Coffee Shop two weeks ago and has committed to preserving the building in some form. But what will happen to the the Warwick Apartment House and the Oliver H. Bair Funeral Home? The firm is still seeking permission to demolish these historic buildings on Sansom Street.

Regarding the Rittenhouse Coffee Shop, principal Dustin Downey, son of founder and CEO Tim Downey, said that his firm would “tear the building down and replace it brick by brick” if they have to. (We’re not exactly sure why they would do so, or why it would be necessary.)

Downey insisted that the other two buildings in question are so beyond repair that not even a façadectomy would be possible. The apparent contradiction was not lost on the CCRA and the issue will likely continue to be addressed as the project moves forward.

When approached after the meeting for details on why the Warwick and funeral home are beyond salvaging, a Southern Land representative began to answer, then hesitated. Legal counsel, hovering behind, stepped in and informed me that a “detailed report had been submitted to the Preservation Alliance [for Greater Philadelphia].” 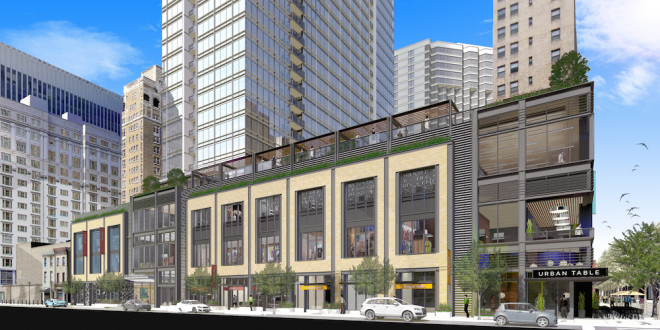 Tim Downey told the crowd that he believes 1911 Walnut is “the most important vacant lot in the city.” The design of the project has, so far, been fluid and fluent in its grand gestures. The firm’s motivation to make the most of the L-shaped parcel is apparent. Southern Land has shown a willingness to engage with the community early, and the community has been eager to work with the developer. The high profile parcel deserves good faith negotiation as well as a first-rate, transformative development project. It isn’t clear how Southern Land’s application for economic hardship, which would enable the company to demolish the Bair Funeral Home and the Warwick Apartment House, will be received by the Historical Commission’s committee on economic hardship. The first hearing is in early 2016.