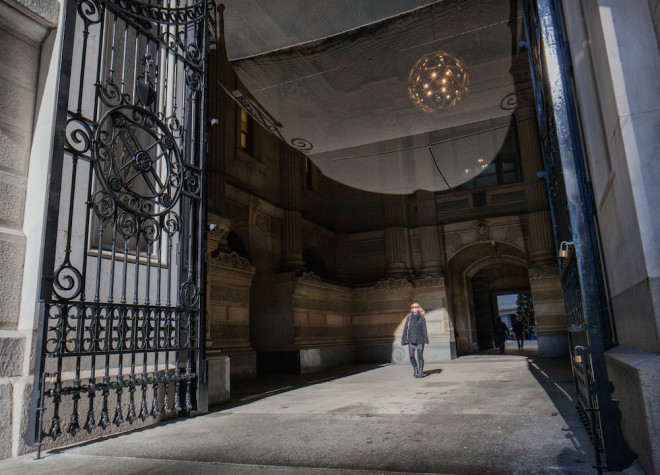 Editor’s Note: A version of this story appeared in the December issue of Extant, a publication of the Preservation Alliance for Greater Philadelphia.

There were always two reasons to wince when bringing a visitor to Philadelphia’s City Hall on the weekend. The first was that the courtyard was closed, meaning the city had officially capitulated to a shrunken sense of itself. The second was that the chain link gates that locked the place down were therefore distinctly visible, a dirty expletive aimed at Philadelphia’s ultimate architectural gesture of grandeur.

The chain link gates were installed in the 1980s as restoration work began on City Hall Tower. As construction fencing, they weren’t meant to be permanent. But having lasted more than 30 years, the chain link gates remind us of the pernicious effect of an inappropriate architectural gesture.

In September, at a cost of $1.5 million, City and Center City District officials began the process of replacing the chain link gates with magnificent new portal gates based on drawings created in 1869 by City Hall architect John McArthur, Jr. but never realized. Robinson Iron of Alexander City, Alabama fabricated the new gates out of aluminum and stainless steel, materials chosen for their lighter weight compared to wrought iron. 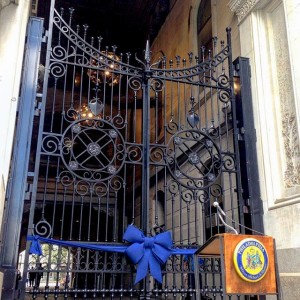 More than 146 years in the making. The ribbon cutting for the new gates at City Hall’s West Portal in September, 2015 | Photo: Michael Bixler

This is the second attempt to install architecturally appropriate gates at City Hall. In 1983, the Philadelphia Historical Commission, under Richard Tyler, coordinated an effort to salvage wrought iron gates from the Philadelphia General Hospital complex as it was undergoing redevelopment (some fencing and gate pillars still exist along Civic Center Boulevard). The initial plan, costing about $30,000, was to install gates in City Hall’s north portal in conjunction with the restoration of that part of the building. In 1984 or 1985, the project expanded to all four of City Hall’s portals, but funds were no longer available to cover the increased cost of about $70,000. The chain link gates were left in place, apparently because officials feared graffiti artists would tag the tower.

Three decades later, the new gates complete the poetic reconnection to City Hall that began with the opening of Dilworth Park last year. If Dilworth leads the pedestrian into intimate connection with McArthur’s French Second Empire monument, with its 88 million bricks and more than 200 works of sculpture and bas-relief, the soaring gates draw the eye skyward and into the realm of wonder. This is the gift of the monumental.

McArthur, Jr. drew the gates into a rendering of City Hall, possibly one he made for the public competition for the commission. They lay forgotten in the City archives for almost 150 years until the architect Hy Myers, of Vitetta, discovered them in the early 1990s as the firm began a master plan for the restoration of City Hall. A 2001 Vitetta report connected to the first phase of restoring the building’s envelope included concept drawings of McArthur, Jr.’s gates installed in the four portals, at an estimated cost of $990,000.

Having made it a priority to continue the restoration of City Hall during his two terms, Mayor Michael Nutter appropriated funds to fabricate and install the gates and asked the Center City District to manage the project under the supervision of Vitetta’s Nan Gutterman. The challenge was to adapt a single rendering—made by McArthur, Jr. before he had fully developed the architectural language of the building—into a workable design. The hope was that the gates would look like they’d always been there, preservation in reverse. 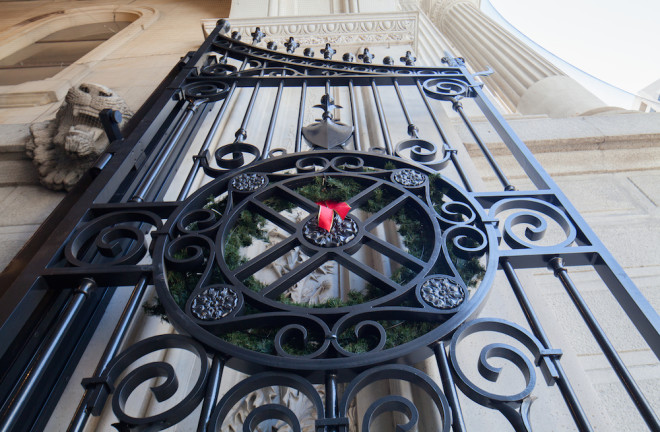 A Calder lion wrapped in safety netting still manages to artfully interface with the new portal gates. The backwards wreath on an open gate not so much (but it still beats cyclone fencing) | Photo: Michael Bixler

As KieranTimberlake’s transparent glass subway entrances and the other contemporary design elements of Dilworth Plaza have added a new layer to the architectural fabric of the site, the gates constitute a kind of sub-layer, a chance to see the rudiments of McArthur, Jr.’s visual composition. The bottom of each gate is finished with a system of rails, collars, and flower petal caps, a pattern McArthur, Jr. developed further in the iron rails below the building’s first floor window wells. The architect placed a circle of rosettes connected diagonally by a dominant X at the center of each gate; a blank shield above the circle completes the medieval gesture. It’s interesting to note how generic this composition seems in comparison with the rich visual and sculptural language that developed during the three decades of City Hall’s construction. McArthur, Jr. and the sculptor Alexander Calder used bas-relief carvings and sculpture to adapt the French Second Empire style to late 19th century Philadelphia, capturing powerful images of the city’s intellectual and natural history. By giving us a visual starting point, the gates allow us to see the depth of this evolution.