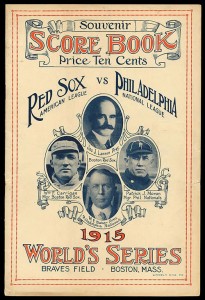 World Series, yes, Subway to the Navy Yard, not then either

In 1915, the Phillies played the Boston Red Sox in their first World Series, an appearance that capped Philadelphia’s first great era of modern baseball. Four of the previous five years (all but 1912), the Athletics had made it to the Fall Classic, and three times they emerged champions.

Early that year, with American involvement in WWI heating up, a large group of enlisted Navy and shipyard workers broke from their jobs at the Navy Yard and marched up Broad Street to the Academy of Music. Their gripe? Having no subway access to the Navy Yard, which forced thousands of workers into labyrinthine commutes via streetcar and foot. As I once described in a Possible City article on PhillySkyline.com, one by one, admirals, enlisted men, and workers came up to the stage to demand the city start building the Broad Street Subway (funding had been appropriated in 1912). A worker named Archie Allen put out a resolution, which said:

Whereas the people of Philadelphia are suffering intolerable hardships, and the future development of the city is imperiled…The city of Philadelphia is now legally qualified, financially able, and properly equipped to proceed with the construction of the high-speed transit system…

Now here we are almost a century later. The Fall Classic this year very well may be attended by thousands of fans arriving on the Broad Street Subway. But the 8,000 or so who work at the Navy Yard just one mile on are relegated to car or infrequent bus service. And guess what? They’re running out of parking. But more than that: without the transit connection, the Navy Yard will never advance beyond prettified office park. The future development of city is thus very much still in peril.

A dynamic Philadelphia of the future, with the Center City-University City nexus built out, will require a third node. The Navy Yard is Philadelphia’s best opportunity for a forward-thinking, innovation-centric new city that can can capture new investment, technology, and architecture. Philadelphia 2035, the city’s impressive new master plan, says that a Broad Street Subway extension, with two Navy Yard stops, can be built for $350-375 million, slightly more than the cost, by the way, of Citizens Bank Park, and I’d like to think, with greater long-term impact than even the Phillies. Dynasties, after all, eventually end. Just ask Connie Mack.

This is the first of many explorations of the ideas and strategies presented in Philadelphia 2035.