After The Trocadero’s Closing, Preservationists Ponder Saving The Interior 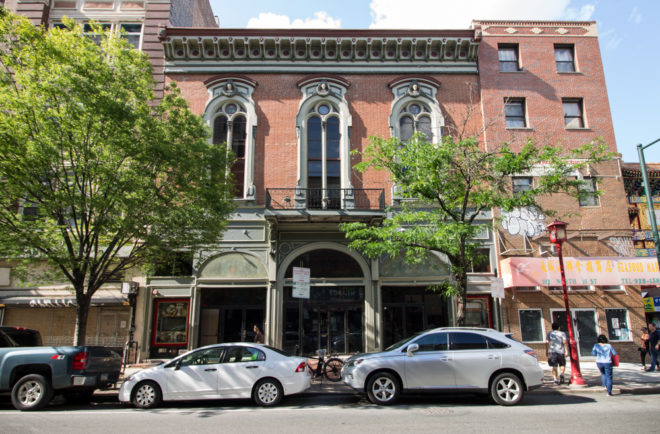 The famed Trocadero Theater in Chinatown closed its doors in May 2019. The building began as the Arch Street Opera House in 1870 and then became a burlesque theater in the 1900s. A well-loved dance club and music venue since the 1980s, its next use remains unknown. | Photo: Michael Bixler

At the end of May this year, the Trocadero Theater at 11th and Arch Streets closed its doors for good after a handful of big, final concerts to celebrate decades of presenting national music acts and local bands. Although the venue has experienced closures before, its future is now uncertain. Current owner Joanna Pang has stopped booking shows, but hasn’t indicated whether the building will be sold.

Built in 1870, the Trocadero was designed by architect Edwin Forrest Durang. A specialist in ecclesiastical and theatrical design, he also designed Roman Catholic High School for Boys at Broad and Vine Streets and Fishtown’s embattled St. Laurentius Church. It opened as the Arch Street Opera House, offering musical comedies and traveling minstrel shows, followed by burlesque shows in the 1950s. In the late 70s, Pang’s father purchased the building to present Chinese cinema. The 1980s saw the start of its most recent incarnation as a dance club and live music venue.

“On the face of it, it’s just like you were nominating a building,” said Patrick Grossi, director of advocacy at the Preservation Alliance. “It’s something that communicates historic significance, either because of its architectural pedigree or what it says about the past, whether it’s a local past or national past. Does it communicate some kind of cultural significance or did something of significance happen there? Those kinds of criteria are essentially the same for exteriors and interiors.” 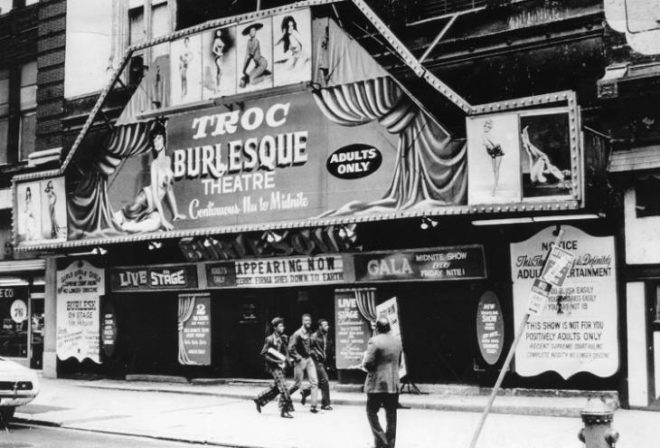 The Trocadero Theater in 1973 when it was still being used as a burlesque theater. | Photo courtesy of Temple University Libraries, Special Collections Research Center

What is different is the number of each that are currently on the local register. To date, there are only four sites in Philadelphia with a historic interior designation. Two were a result of nominations by the Preservation Alliance: 30th Street Station and the Grand Court of the former John Wanamaker department store and what is now Macy’s. The other two are City Council’s chambers in Room 400 of City Hall and much of the former Family Court building on Vine Street, including murals created in the 1930s under the Works Progress Administration.

Compare that to the hundreds of building exteriors on the local register. In a city with as much history as Philly, it would seem like many more building interiors would qualify. 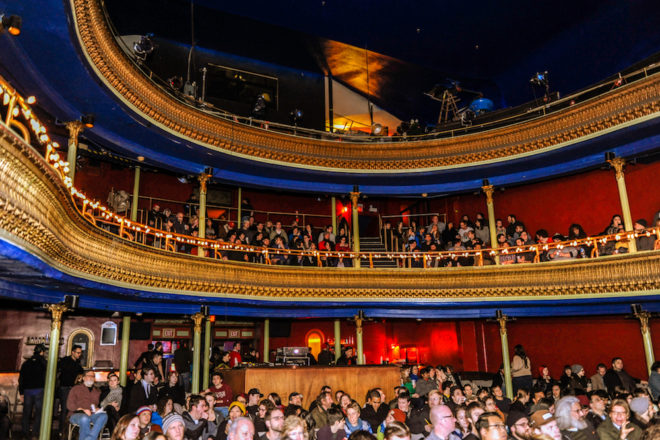 View of the balcony seating inside the Trocadero. | Photo courtesy of Kendall Whitehouse

However, there are no clear rules in determining accessibility, and with so few precedents, there is not a lot to draw upon when considering an interior. This came up around five years ago when the Preservation Alliance nominated the former Blue Horizon boxing venue on North Broad Street. The storied venue operated from the 1960s until 2010 and was regarded in the industry as one of the world’s premiere boxing venues.

“We had nominated the main arena as an interior and bumped up against the issue of public access,” Grossi recalled. “One of the commissioners [of the Philadelphia Historical Commission] at the time argued that it was not a public space, it was actually, in his term, a ‘tolled’ space. And that argument carried the day. It was not really considered a public space and therefore deemed not eligible.” That decision, however, was not viewed as precedent-setting and the Historical Commission continued to consider each nomination individually.

Along with answering the question of public access, the condition of the interior must be considered, just as it is for exteriors. The four interiors currently designated are remarkably intact, with minor changes made over the years. “By and large those buildings you walk into today in 2019 are not that different from the building you walked into in, say, 1900,” noted Grossi. 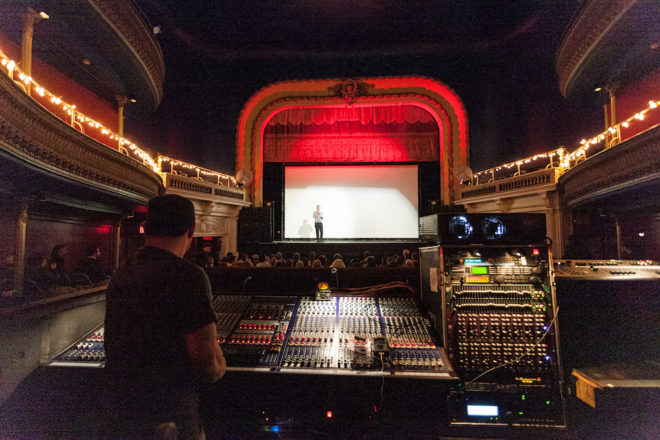 View of the Trocadero’s stage from the soundboard. | Photo courtesy of Steve Weinek

The Trocadero, on the other hand, has had some changes. In particular, the floor height and some of the seating configuration have been changed. Much of the original seating and ceiling ornamentation are gone. “So you have to make a determination, is there enough there to communicate what this place once was, and communicate significance as a performing arts venue?” Grossi asked, opining that, on that count, the site’s status remains.

“Because there are so few of these [designated interiors], it’s a somewhat unresolved question,” he explained. “There are any number of buildings that have been added to the local register that are in pretty rough shape. They’ve suffered a lot of neglect over the years and in some cases suffered some rather insensitive changes. Nevertheless, their significance was still conveyed and they were added to the local register. So does that same standard apply to interiors?”

If the entire interior isn’t deemed sufficiently significant, either due to alterations or deterioration, there is an option to nominate parts of it, or specific objects in the building. This strategy has been used a handful of times, starting in 1998 with the Dream Garden glass mosaic mural by Maxfield Parrish and Louis Comfort Tiffany in the Curtis Building on Independence Mall. The Wanamaker eagle statue also received this designation 17 years before the entire Grand Court interior was added to the local register. 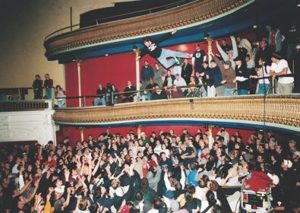 Ryan Dunn, former member of the “Jackass” crew, leaps from the balcony of the Trocadero during a show. | Photo courtesy of Adam Wallacavage

The Preservation Alliance began considering an interior nomination for the Trocadero when the announced closure raised an alarm for them. “There’s been a string of closings of historic theatres, the Royal being one, the Boyd another. We’d hate to lose another downtown theatre space,” said Grossi. “I don’t doubt that some people might worry the Troc could go the way of the Royal on South Street. The Royal went through an economic hardship process and they were granted permission to demolish the building.”

According to Grossi, what saved the facade of the Royal Theater was a private preservation easement the Preservation Alliance had with the owner. But that limited preservation, called a “facadectomy,” is not an approach embraced by most preservationists, who usually consider it a last-resort compromise.

Given that the owners of the Trocadero have cited Philly’s changing music landscape and the increase in venues run by mega-promoters in their decision to cease operations, Grossi thinks there’s a risk the building could be named as an economic hardship case. “Then the entire thing would be gone. These old performing arts spaces are vulnerable properties, and there’s not a whole lot in place to recognize and protect them.”

Since the Historical Commission doesn’t regulate use and doesn’t have any control over zoning, this sort of designation is one of the few tools at their disposal. Whether or not the Preservation Alliance goes ahead with a nomination of the Trocadero’s interior for the local register, Grossi thinks that they’ll be considering more interiors in the future to more formally recognize their significance.