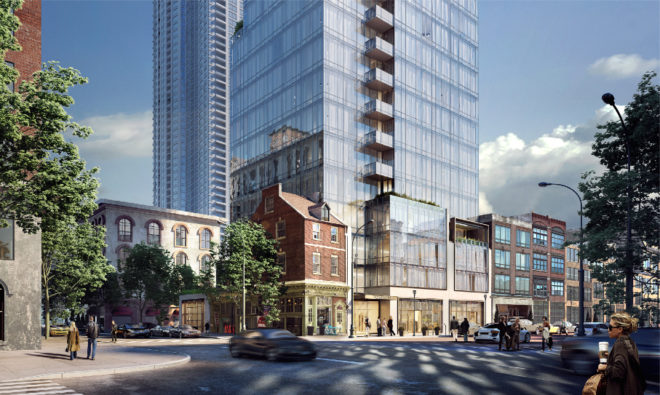 Suburban real estate developers Toll Brothers presented a third version of their plans for a 24-story residential tower on Jewelers Row to the Civic Design Review Committee on Tuesday. The meeting was the final regulatory hurdle required before the Horsham-based firm moves forward with plans to demolish five historic properties on Jewelers Row and replace them with new luxury condominiums.

While the presentation was standard dry fare, delivered primarily by lead architect on the project, James Davidson of SLCE Architecture, the meeting was not without drama. Toll Brothers representatives pitched their revised proposal to a full house, in part due to a later item on the agenda, which drew crowds opposing Temple University’s plans for a football stadium.

Following public comments, the entire Toll Brothers design team stood up and exited the room, despite the fact that members of Civic Design Review Committee had yet to finish giving feedback. Responding to critiques, Carl Primavera, the group’s zoning attorney, quickly took to the podium to field questions as Toll Brothers representatives gradually returned from the hallway. Upon criticism that the design team had essentially walked out of the review, Primavera aggressively assured the crowd and committee of the group’s commitment, stating “They’ve come a long way to answer your questions. Longer than how ever people came to be at this meeting.”

The most recent version of the plan is a departure from the second design unveiled in February 2018. The new design consists of a mostly glass façade broken up into bays with varying setbacks in a manner that Davidson claims reflects the “cacophony” and diversity of styles on Jewelers Row. While perhaps an improvement from the first version presented in 2016, it remains generic and wholly dismissive of the historic streetscape. 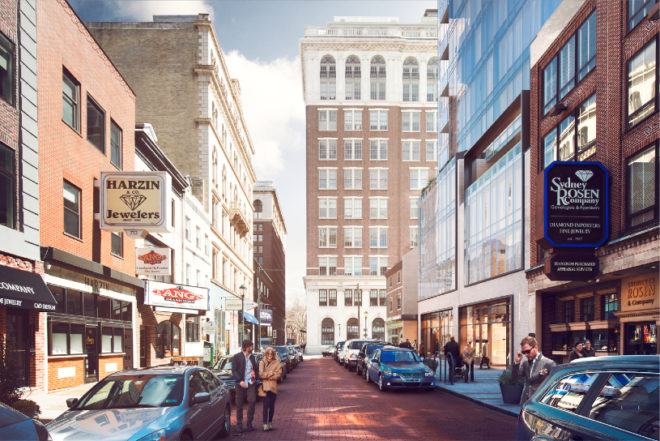 Davidson’s explanation of the architectural merit of the proposed tower during his presentation was heavy on metaphors, exaggeration, and generalities. While the historically designated property at 700 Sansom Street was a precious “jewel,” the new condominium tower would present an epic “voyage along Sansom Street.” “You will see that there is a lot of interest, a lot of breaking up the façade from one end to another and a lot of interest,” said Davidson. “We have heights that vary from three stories to four stories, we have setbacks, we have any number of architecturally interesting components.”

This is the final design review required of the real estate firm, a process which ultimately has no regulatory teeth. There is no guarantee that Toll Brothers will improve upon this latest proposal nor are they legally expected to actually build what they have presented. CDR board member and architect Cecil Baker summed up the Committee’s frustration stating, “I don’t trust what I’m looking at.” Baker continued, “We are giving up a big piece of our history for this building, so we should get back something that’s a joy to look at.” 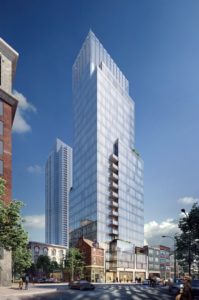 According to SLCE’s new proposal, the tower design “culminates in a faceted crown, which serves both as an homage to Jeweler’s Row as one of the earliest and most vibrant jewel districts in America, and as an architectural flourish for the building and the city.” | Rendering: SLCE Architecture

All three designs of the tower have so far been met with unanimous disapproval and criticism, the specifics of which range from the disjointed choice of materials–the original rendering featured the tower portion partially clad in brick paneling that awkwardly extended to the full 29-story height–to the hypocrisy of constructing a high profile tower in a prime location that project architects claim its best asset as being the ability to “dissappear” into the sky. The lack of obvious amenities, such as balconies, which would take advantage of the tower’s strategic location overlooking Washington Square Park, brings into question the Toll Brothers commitment to investing in a quality product or simply looking to maximize their return.

But there is endless room to criticize the tower’s design. Like all of the suburban developer’s projects, the proposal for Jewelers Row was never intended to be a bonafide design project. As Inga Saffron, architectural critic for The Inquirer has pointed out, SLCE isn’t even really considered a design firm. For Toll Brothers, developing Jewelers Row is simply an execution of their standard operating procedure: buy, develop, profit, and grow. The building itself is nothing more than a means for facilitating this mission.

The real question the public should be asking isn’t,“Why won’t Toll Brothers take enough care to build Philadelphia the architectural ‘jewel’ that it deserves,” but rather, “Why is Toll Brothers the type of company that the City has all but invited, through policy and inadequate protections, to shape one of the most historically significant and sensitive areas in Philadelphia?” Surely this is a confluence of unfortunate circumstances that will have lasting repercussions for our “World Heritage City.” And despite the early, stern public statement from Mayor Jim Kenney, there seems to be nothing anyone can do to stop it.

While the proposed tower may represent unapologetically bad, capital-driven architecture, the Jewelers Row saga in all of its complexity represents a gross failing at the municipal level to support established local businesses and prioritize and protect historic places that people care about deeply. Even worse, the way the situation has played out—from the Historical Commission’s refusal to take a stance on any issue related to the protection of historic buildings, to the forced and ineffective public engagement, to the formation of a directionless and cumbersome Historic Preservation Task Force—risks furthering a collective sense of resignation that we, as a city, can’t figure out how to do any better.

Historic preservation scholars argue that the physical form and design of buildings represent the cultural values of the period in which they were built. In this sense, the proposed tower for Jewelers Row could be said to embody Philadelphia’s values in 2018, a time when city government repeatedly encourages and subsidizes the development of luxury housing at the expense of Philadelphia’s culture and historic character. Sadly, by this definition, the newest Toll Brothers design is right on the money.