A Solution To Preservation Crisis: Compromise And Flexibility 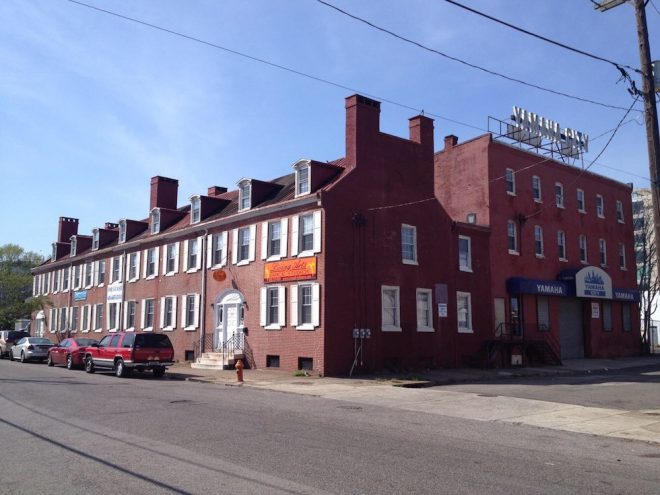 This row of early 19th century Federal-style houses at 81-95 Fairmount Avenue represents Philadelphia’s lost waterfront. The house at the corner was used by the Beach Street Mission in the late 1800s, which eventually became the Guild House on Spring Garden Street. The row, including the mid-19th century wagon house behind it, is likely to be demolished if not added to the Philadelphia Register of Historic Places. | Photo: Richard Gonzalez

For many, it’s easy to pass by the row of houses at the northwest corner of Fairmount Avenue and Beach Street and not see them. Constructed in the 1820s, this last row of Federal style houses standing on the Philadelphia waterfront at 81-95 Fairmount Avenue is largely obscured by the modern trappings of Spring Garden Street and Delaware Avenue.

Last month, the Philadelphia Historical Commission voted 4 to 4 during a hearing on the historic designation of 81-95 Fairmount. This resulted in no action. On Friday, October 14, the PHC will reconsider the matter. If the PHC declines to designate the Federal-style row it will no doubt be leveled for new development. The property owner has been fighting the designation of the buildings for more than a year now. A petition calling for legal protection of the row through placement on the local register has been circulating in recent weeks.

In 2009, the Delaware River Waterfront Corporation started work on the Central Delaware Master Plan. As part of the master plan, studies were commissioned for historic preservation as appendices. These documents were completed in 2011 by Emily T. Cooperman of ARCH Preservation Consulting and included a historic context, a final summary report, a photographic survey of the historic resources discussed in the plan, and an inventory of historic properties. Figure 44 of historic preservation inventory features 81-95 Fairmount Avenue. The PCPC adopted the plan in 2012. In addition to the master plan, 81-95 Fairmount Avenue is also referenced in the City’s own master plan, Philadelphia 2035, under 8.1 Cultural, Historical, & Architectural Resources. Of all the undesignated historic properties in the River Wards, an image of this row is featured on the cover sheet of Section 8.1. Yet, two of the dissenting votes for historic designation of the Federal-style row were the representatives of Departments of Commerce and Licenses & Inspections. One can only assume the dissenting commissioners are not familiar with the master plans for the waterfront and city. One commissioner said that the nomination for 81-95 Fairmount Avenue lacked rigor, but it is clear that the primary deficiency is the absence of the most basic knowledge of the City of Philadelphia’s own plans for historic preservation. This may be a problem of leadership, however. The commissioners have an obligation to be aware of these plans and support implementation after such a rigorous process of planning was completed. 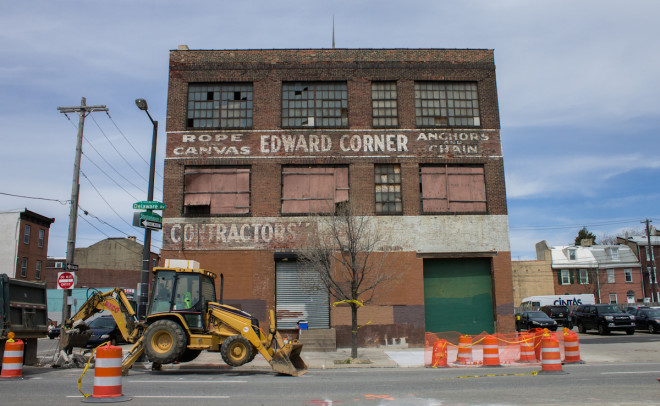 Edward Corner Marine at Shackamaxon Street and Delaware Avenue is one of the last remaining remnants of Fishtown shipping history. Built in 1921, the shipping goods warehouse was once a one-stop shop for rope, anchors, blasting mats, and canvas covers. | Photo: Michael Bixler

The inventory of historic properties in the master plan identified other buildings in both Northern Liberties and Fishtown. One particularly attractive, yet unassuming municipal building identified was the Philadelphia Asphalt Warehouse that was caddy corner to 81-95 Fairmount Avenue. This adaptable building was demolished last year for a used car lot, although its three original Belgian block driveways remain. Since 2012, this is just one of ten or more buildings identified in the plan that have since been demolished with no oversight. In fact, of the numerous buildings listed in the master plan, only a few have been designated, including the Delaware River maritime landmark Edward Corner Marine Merchandize Warehouse and the Dr. Frederick J. Rapp House, built in 1786 and the former home of a Hessian mercenary. Other buildings in the plan have been nominated—228 Richmond Street, built between 1808 and 1838, and 227 E. Allen Street, constructed between 1830 and 1838—are rare surviving wooden houses near the waterfront In Fishtown. Nevertheless, it will prove very difficult to implement a preservation plan for the Central Delaware if the buildings identified have been demolished.

A Clear Vision for Preservation

Planning is essential. However, a plan is futile when implementation fails. Vision, itself, can simply be a clever vantage toward the future or it can be a harkening to the inspiration that leads to an important accomplishment. Unfortunately, there is an overall lack of vision for historic preservation in Philadelphia. However, in the last year or two, there has been a change—one that a highly placed City official recently labeled “alt-preservation.” Perhaps this is in part related to my efforts to engage communities, including local or “alt-preservationists,” to file nominations for the Philadelphia Register of Historic Places. What some may view as “alt-preservation” others see as a basic service geared towards assist communities in preserving the unique fabric of their neighborhoods. Yesterday, Mayor Jim Kenney issued a statement the essentially recognizes our current preservation crisis. After submitting more than 60 nominations, I must admit that most of this work was triage, but resulted in an awakening of Philadelphians, including a larger faction of the preservation community. Everyone must remember our primary nexus is to protect through historic designation; without designation the system doesn’t work.

Yet, designation isn’t the only tool available. A few months ago I withdrew a pending nomination to promote compromise. A neighborhood association, developers, and I signed an agreement to ensure the preservation of an important warehouse façade in Fishtown. We all recognized that the building was significant. However, the agreement was signed so that the development plans could be more easily achieved through a less stringent method of preservation. At present, City government’s only mechanism to protect historic properties is the PHC’s white glove designation approach. Going forward, in order to truly preserve what I like to call Philadelphia’s “Embarrassment of Riches,” we will have to think outside the box.

The key to success in saving built historical assets in Philadelphia is compromise between development and preservation. I have heard many opinions regarding what’s “right” and “by right” in regard to the demolition of the buildings on Jewelers Row. During a public meeting on Jeweler’s Row at the Philadelphia History Museum, Hy Goldberg, president of the Philadelphia Jewels’ Row Association, announced the organization’s position on development versus preservation. Given the circumstances, it was amazing that his organization had what I felt was the best idea given the current situation—a compromise. Toll Brothers had pledged to preserve the cornice line in the form of new buildings, but the merchants on Jewelers Row weren’t falling for such a backwater approach. Goldberg stated that his organization expected the developer to not only preserve, but restore the original façades, which he argued would be an improvement on the current appearance. The Jewelers Row Association clearly understands that this type of compromise would both preserve and improve the appearance of this historic commercial corridor, while also achieving Toll Brothers’ development plans. 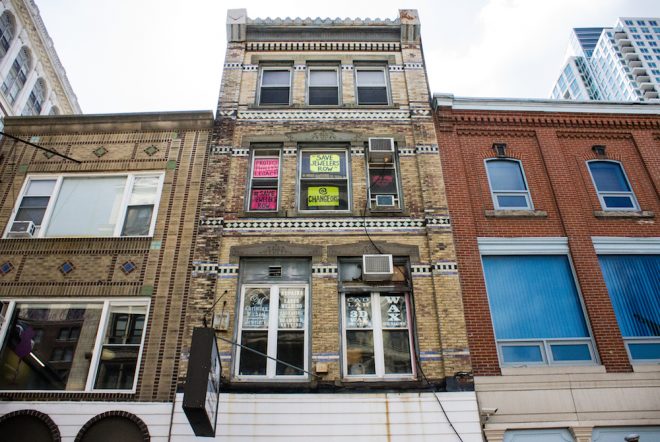 Toll Brothers has stated that they intend to preserve the cornice line of 702-708 Sansom Street in their plan for demolishing the row for the construction of a 16-story apartment tower. | Photo: Michael Bixler

Preserving just a façade or a building envelope isn’t an ideal outcome, but it is a basic method of preservation that is commonly used and effective in cities with attached, terraced buildings. In Washington, D.C. and New York City this is common practice, only it occurs as it does in Philadelphia after endless meetings and hardship hearings. Locally, the Boyd Theater is perhaps the best and most heart wrenching example of this type of slow-motion bureaucracy. Apply this idea to the largely intact historic commercial fabric of Chestnut Street. Create a set back, and treat Chestnut Street as a façade district. Buildings that require traditional preservation can be individually designated. This allows for development, while also preserving and eventually restoring a sense of place.

On the waterfront, the master plan could be taken a step further. The historic resources identified could be designated, but in a categorical fashion. The traditional, white glove approach by the Historical Commission could be a “Category A” for resources like 81-95 Fairmount Avenue or the Rapp House, the oldest known house in Fishtown. “Category B” would be a less stringent approach, but still require restoration of the façade. The Edward Corner Marine Merchandize Warehouse is one building that might fall into this category. The building envelope would be both preserved and restored, but the categorical designation might more easily allow for a new building to bloom from its center and from the side elevation as a matter of right. Architecture critic Inga Saffron recently called the redevelopment of the Brown Brothers Harriman building on Walnut Street to include an apartment tower the ideal project and it is essentially the equivalent of what I refer to as a “Category B” designation. The impending Aramark project near the Schuylkill River calls for the removal of terra-cotta details from an old, industrial façade. Categorical designation could prove to be a less stringent preservation measure that would preserve important original features of such a buildings–like this distinctive, terra-cotta detailing–while also promoting new construction.

Perhaps the least stringent could be called “Category C.” In row house neighborhoods this would allow a historic district to be designated, but with softer design standards. The benefits for homeowners concerned about cost might be more affordable windows and (I can’t believe I’m saying this) storm doors. Our most under-appreciated jewel, the Germantown Avenue Colonial Historic District, an unprotected National Historic Landmark, could benefit from categorical designation as well. Colonial-era buildings should be place in a priority category, as well as important Victorian and Revivalist buildings, while later and less significant buildings might be designated with lower categories. This also makes preservation affordable and an option for people of all incomes. It would be great, of course, to restore everything perfectly, but with nine buildings demolished on Germantown Avenue in 2016 alone, we can’t continue to let the perfect get in the way of the good.