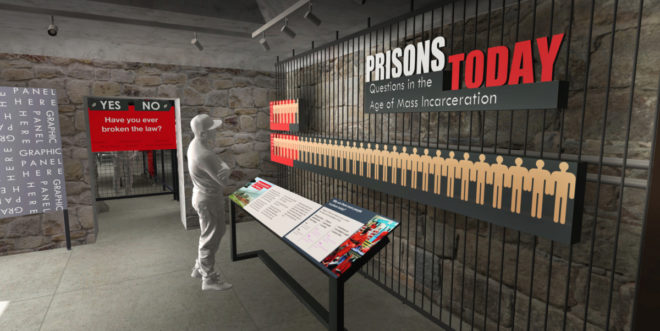 Eastern State Penitentiary, the abandoned prison turned penal museum and stabilized ruin on Fairmount Avenue, will soon be using more of its historic site to ask tough questions about contemporary issues surrounding imprisonment in America. Starting on May 6, the penitentiary will feature their groundbreaking new exhibit, “Prisons Today: Questions in the Age of Mass Incarceration.”

“It’s all part of the same big push to make the subject of mass incarceration and contemporary prisons interesting to a broad audience,” says Sean Kelley, senior vice president of Eastern State Penitentiary.

Kelley, who led the development of the new exhibit, can’t hide his excitement about the soon to be finished construction and the exhibit’s place in the museum’s mission as a whole. Eastern State may be famous for past inmates like the notorious Al Capone, or for its spooky Halloween attraction fundraiser, Terror Behind The Walls, but in the last several years the site’s programming has been increasingly focused on the evolution of incarceration and the problems facing prisons today.

It began with the “Big Graph,” a startling representation of the huge spike in the United States’ national prison population.

“That’s our tool for the big picture,” Kelley says, gesturing toward the graph that looms tall over the baseball field just outside the prison’s former workshop that will house the new exhibit. According to the graph, from 1900 to 1960, the size of the U.S. prison population was relatively constant, then it exploded after 1970. The bar representing the prison population in 2010 towers 16 feet above the ground. Kelley notes that the actual crime rate has not changed very much—criminal justice policy itself fundamentally transformed to a focus on imprisonment. 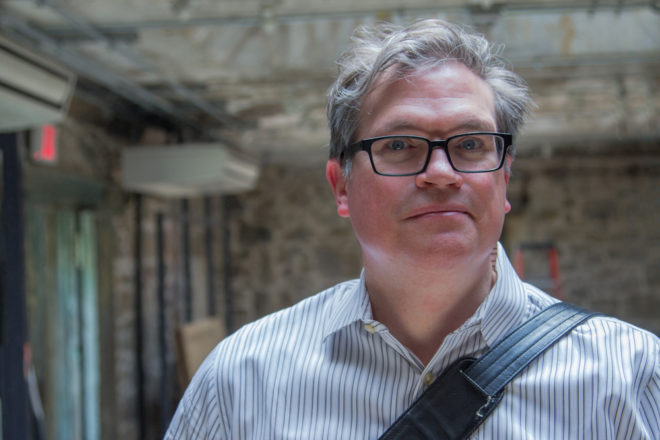 The graph is a stark visualization, and it may lead visitors to the same conclusion found in the entrance to the new exhibit: “Mass Incarceration isn’t working.”

That is the thesis of “Prisons Today.” The exhibit features video installations and a series of recordings showing politicians from Lyndon Johnson to Bill Clinton introducing historic pieces of legislation that helped grow the prison population, as well as interactive media, startling facts, and graphic representations of the effects of mass incarceration on society.

When entering the main room, a sign above the door asks visitors, “Have you ever broken the law?” Flashing lights indicate two different paths for “yes” and “no.”

“We call this the ‘liar’s corridor’,” jokes Kelley, walking to the “no” side. It got the name, Kelley says, because 70 percent of Americans have committed an offense serious enough to receive a jail sentence, though whether a person is incarcerated or not has a lot to do with both the nature of the offense and the person.

The exhibit invites visitors to examine how their social circumstances equate to their relationship with the law through an interactive, “Early Experiences Matter,” which takes into account things like the size of the budget of one’s school district, ethnic background, or early exposure to crime and violence.

Filmmaker Gabriela Bulisova created Six Stories, a video installation, for the exhibit. The video tells the stories of six individuals whose lives were profoundly affected by the criminal justice system in Philadelphia, from a man re-entering society after his incarceration to an inmate with a life sentence. Bulisova says she and her filmmaking colleagues wanted to express the impact mass incarceration has on families and communities.

“Once you see some of these eloquent, passionate, and authentic individuals talking about what they went through, I think the conclusion is inevitable: we have to make some very big changes going forward,” says Bulisova.

Create a conversation about the here and now of prisons is exactly what Eastern State hopes to do with the exhibit.

“We decided we weren’t talking about contemporary issues enough,” says Annie Anderson, senior specialist at Eastern State and lead researcher for the exhibit. “We weren’t truly living into the portion of our mission statement which states that we will be a forum where contemporary corrections are discussed and the issues that puzzled the original founders of Eastern State are still at play today.”

The exhibit is so contemporary that a small part of it has already become outdated, but in this case, as Kelley points out, that’s a good thing. On one wall sits a panel, “Hidden Impacts,” centered on a map that reveals the states where convicted felons can vote. Virginia had been colored a dark red, signifying that convicted felons received lifetime bans on voting, but Governor Terry McAuliffe lifted the ban just one week ago, restoring the right to vote to 200,000 ex-convicts in the state.

Change is something that Kelley wants people to think about after visiting the exhibit. While Virginia may be a step in the right direction, most of the states on the aforementioned map are colored varying shades of red for prisoners and ex-prisoners whose votes won’t count this year. Not to mention that graph in the yard isn’t getting any smaller.

Before visitors exit the new exhibit they will encounter a final section, which asserts that “Change is Possible.” Here, the curators have pulled together models of mass incarceration that work in other parts of the world, and interactive pieces that invite visitors to weigh for themselves the different uses of prisons against one another, from retribution to rehabilitation.

“We decided not to pose questions—‘Are American prisons working or not?’—when we and a lot of other folks already knew the answer to that,” says Anderson. 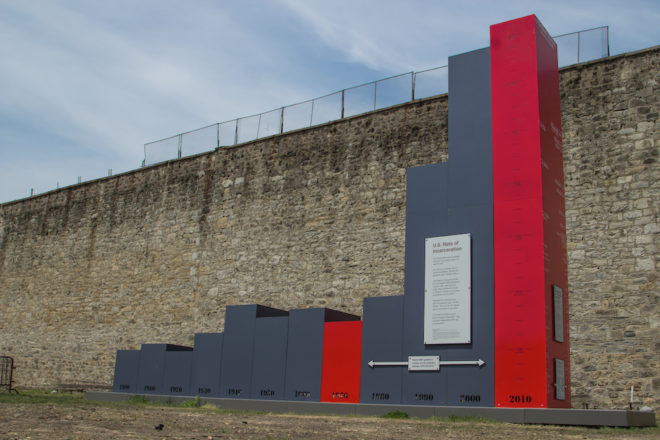 “The Big Graph”, a 16-foot tall steel-plated sculpture on the prison’s baseball field illustrates incarceration growth in the US since 1900 | Photo: Tyler Horst

The exhibit certainly does not stand take a passive stance to its subject matter, but it’s something that Kelley says that the museum has been building confidently on for years.

“When we built the graph, we talked about race [demographics in prison] explicitly for the first time. The graph actually uses the word ‘crisis,’” says Kelley. “That was two years ago, and it was scary.”

But Kelley and Anderson both agree that they quickly found that their visitors and community partners were extremely receptive and hungry to know more.

“We want to encourage other people to get involved in the system because it affects billions of people,” says Anderson.

“Prisons Today: Questions in the Age of Mass Incarceration” at Eastern State Penitentiary opens on May 6 with a reception from 5:30 to 7:30PM and a preview of art installations and historic exhibits to be featured during their 2016 season. The event is free to the public.