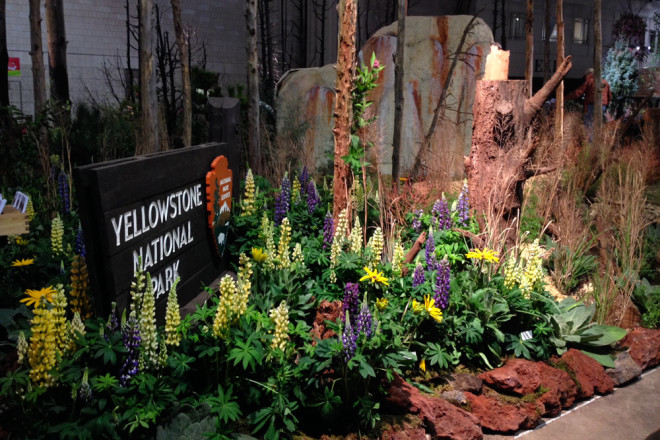 As America’s national park system approaches its 100th birthday—US Congress established the National Park Service on August 25, 1916—it’s worth noting Philadelphia’s place in it. On one hand, Independence National Historical Park and its famous cracked bell make for the city’s most recognizable tourist attractions, drawing three and a half million visitors a year. (Valley Forge National Historical Park draws another million.) On the other, when most people think “national parks,” they think breathtaking landscapes like those at the Grand Canyon and Yellowstone. Explore America, the theme of this year’s Flower Show, the Pennsylvania Horticultural Society’s 188th, draws from both types, pitting floral and horticultural interpretations of dozens of national parks in friendly competition at the Convention Center.

When President Woodrow Wilson signed the bill that created the NPS, it solidified under one agency the decades of protectional efforts by his predecessors, dating back to the first national park 44 years earlier. On March 1st, 1872, with President Ulysses S. Grant’s signature, Congress established Yellowstone National Park—largely from the persuasion of a Penn geology professor. 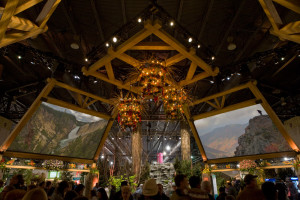 Ferdinand Hayden, a veteran of several geologic expeditions across the young American West and a member of Penn faculty since 1865, set out for the Yellowstone in 1871, building on the efforts of others’ expeditions in each of the two previous years. Hayden’s expedition differed in that it had dedicated federal funding and a team of 50 experts, including Civil War photographer William Henry Jackson and Philadelphia painter Thomas Moran. With Jackson’s large format photos and Moran’s dramatic paintings, Hayden’s expedition played a prominent role in convincing Congress to set aside the land for future generations. Moran earned his place on the expedition from his paintings of natural scenes around Philadelphia, including along the Wissahickon and Schuylkill. His 12′ x 7′ painting from the expedition, Grand Canyon of the Yellowstone, hangs in the second floor lobby of the Smithsonian American Art Museum. Hayden is honored at Penn with Hayden Hall, the home of the university’s Earth and Environmental Science program; he’s buried at The Woodlands.

A hundred years after the National Park Service’s formation—and nearly 150 years after the Hayden Geological Survey—Yellowstone still plays a critical role to the park system identity. So it’s nice to see it so prominently featured at the Flower Show’s ode to the national parks. Stoney Bank Nurseries’ Yellowstone—After the Fire exhibit is set just inside the show’s grand entrance, PHS’ own take on the rustic lodges found at iconic national parks, a timber structure with a floral entrance with the NPS’ famous arrowhead logo, elkhorn chandeliers, and organic sculptures of a buffalo and a bear.

The rustic theme carries over into an exhibit produced by the NPS itself, inspired by the classic national park interpretive amphitheaters. Actual park rangers from across the country share ‘fireside stories’ with visitors, relating the earliest days of the parks, when the rustic theme derived from the Arts & Crafts movement to drum up public interest in the young park system. Among the superlatives offered: when the NPS was formed, it had 27 national parks, and now, there are 410 units in the NPS network, including 59 national parks, 78 national monuments, 125 national historic sites and historical parks, and more. 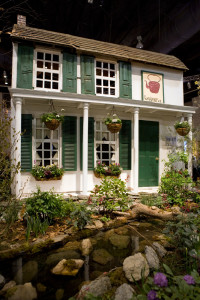 Burke Brothers’ People’s Promenade features a tree-lined lawn and wooden “We the People” backdrop to a giant floral Liberty Bell suspended above. Hunter Hayes’ After the Encampment draws from Valley Forge with meadow grasses and other plants that have reclaimed the landscape, including two soldiers’ cabins, one of which has become ruins from a fallen tree. Temple Ambler’s School of Environmental Design sees flowers and ferns rising from a floor of downed wood and rock inspired by Hopewell Furnace National Historical Site. The Delaware Valley Fern and Wildflower Society sets a bed of ferns against a backdrop of the Delaware Water Gap National Recreation Area.

The most surprising exhibit is the one submitted by Roxborough’s W.B. Saul High School of Agricultural Services of not a national park, but a National Natural Landmark: the Wissahickon Valley. Built by high school students, Wander Inn to the Valley draws its inspiration from the Valley Green section of the Wissahickon, replete with a replica of the Inn, a flowing “Wissahickon Creek,” and native plants including ferns, mosses, shrubs and trees.

Always PHS’ signature event, the 2016 Flower Show faces a little extra scrutiny, as the first production under new executive director Matt Rader. He recognizes what’s at stake up front. “The Flower Show is really three things,” he told a small group of press at a preview last week. “First, it’s a massive community of over 4,000 people—professionals, volunteers, growers, vendors, families. Second, it’s a competition. While it’s friendly, it’s a major investment of time and money that will hopefully lead to a Best in Show. And third, it’s a fundraiser.” The last point certainly can’t be understated, as the Flower Show drives PHS through the rest of the year.

The Explore America theme was already well in place when Rader took the reigns in January. PHS Chief of Shows & Events Sam Lemheney explains: “A couple years ago, [Independence National Historical Park superintendent] Cindy Macleod approached us about doing an exhibit on the park service’s upcoming 100th anniversary. And we thought that would make a perfect [Flower Show] theme for the milestone.”

Lemheney says that exhibitors chose from the national parks on a first come, first serve basis, with no repeats. “We only had one fight,” he says with a laugh, saying that Subaru got dibs on Yosemite as the Flower Show’s premier sponsor. The automobile maker of course made sure to include the drive-through sequoia. 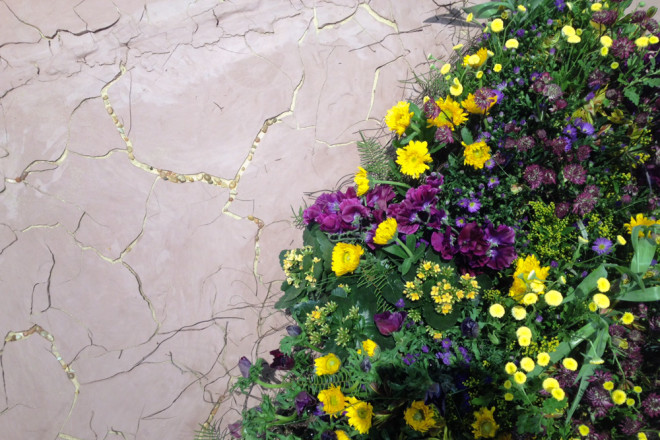 At the Flower Show, over 30 national parks are represented, varying in degrees of size, scope, and interpretation. Waldor Orchids’ Pele’s Garden, for example, is an enormous and colorful somewhat literal representation of Hawai’i Volcanoes National Park, while J. Downend Landscaping’s Acadia National Park plays off of not the rocky seashore of the Maine park, but the tulip-laden vacation gardens shared by the same Mount Desert Island. 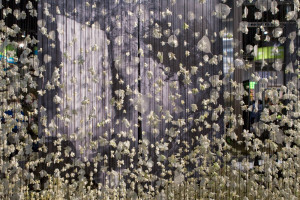 Perhaps the most ambitious and stunning exhibit of all comes from longtime Flower Show exhibitor Schaffer Designs. Ansel Adams and the National Parks reimagines several of the legendary photographer’s works at large scale, floral and organic interpretations of Yosemite’s Vernal Falls, Hoover Dam’s power infrastructure, and of course natural scenes at the Sequoia and Kings Canyon National Parks he helped inspire through his work.

The Appalachian and Pacific Crest National Scenic Trails . . . Cape Cod National Seashore . . . Redwood National Park . . . Many sites—and scents—familiar to national park goers are on display through the rest of this week.

“We want to show visitors all the parks in one place,” says the curator Lemheney, “so that folks can get excited to go visit them in person.”

To launch a gallery of the 2016 Flower Show, click any of the photos below.

The Philadelphia Flower Show’s Explore America runs through this Sunday, March 13th. It’s open 10am–9pm through Friday, 8am–9pm Saturday, and 8am–6pm on Sunday. Tickets are $30 when purchased online at theflowershow.com, $34 at the walkup window.

The Flower Show is one of the National Park Service partners to celebrate its centennial anniversary. For more on that, see HERE.