Many Ways To Skin A Row House

Across the city, architects and developers are finding new forms for the traditional row house, adding eclectic façades with layers of color and texture to the preexisting urban fabric. While a bright new skin doesn’t make up for unimaginative design, it does help enliven the streetscape, dominated as it is by brick and stucco. 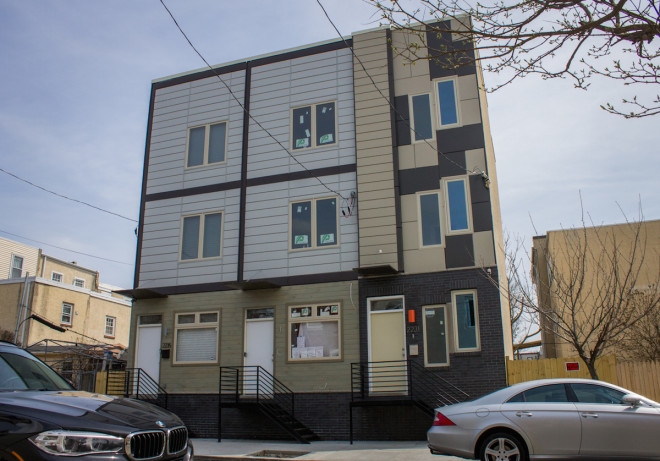 Built by Luval, Inc., of Milltown, N.J, 2231 Coral Street represents an innovative approach to a lot with an awkward footprint. The tall, yet exceptionally narrow form results in an adequate balance of square footage and lends to an interesting layout. The developer gave the building a subtle, complementary color and texture, which they carry through within the interior. 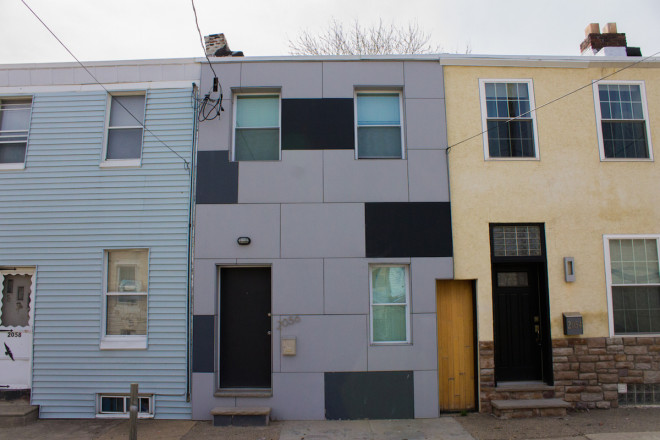 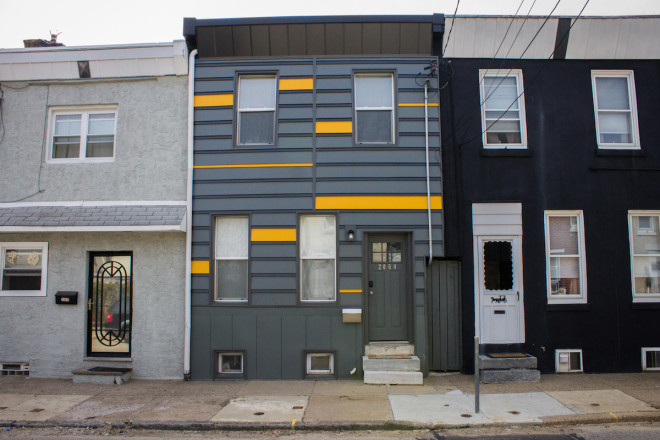 The block of 2052-2070 East Arizona Street includes visually striking new construction and more traditional rehab. The two new houses on this little block integrate into the existing block because they retain the two story scale; two-story new construction is a rarity. 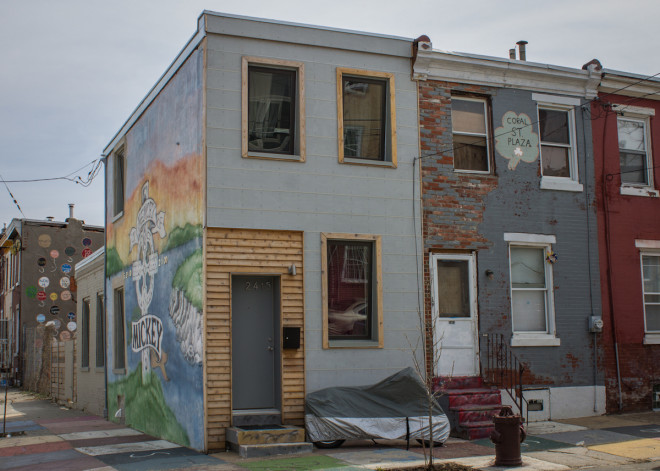 2415 Coral Street keeps with the scale of the block and showcases an understated modernism in its facade | Photo: Michael Bixler

2415 Coral Street, a project of Olde Glory Builders, is another rare two story new construction. The black casement windows combine well with the wood framing used also on the front door. While the materials are contemporary, the style is understated and fits in nicely as an end cap to this row of small houses. The developer also elected to preserve the mural on the rehabbed house, further integrating the building’s new, eco-friendly and innovative design with the neighborhood’s existing character. 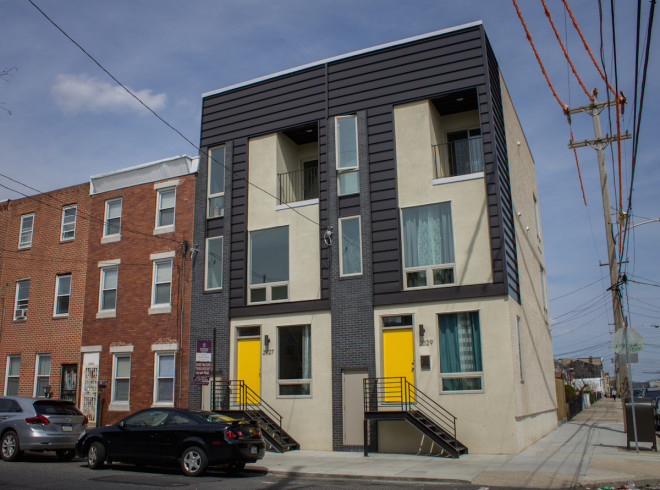 2027 and 2029 East Huntingdon Street are sizable properties, but they sit well along the wide thoroughfare that is already flanked with large, three story homes. While the developer, United Makers, employs a strip of the omnipresent new construction black brick, they also feature attractive dark gray siding and smooth tan stucco for a tasteful and vaguely Mondrian façade.

We also appreciate that United Makers maximized natural light with large windows and installed third story balconies. They’re on the smaller side, but appear quite functional. 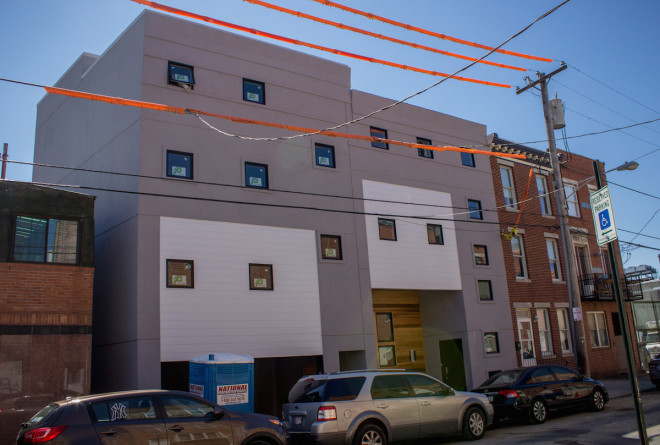 These four new houses at 808 Carpenter Street are each 23 feet wide–about seven feet wider than the average Philly row house. Diverging from the palette of grays, blacks, and yellows, these Bella Vista houses, designed by Greyhouse Service Group, feature soft whites and grays with wood complements. Though larger windows would have been more gratuitous in the overall design, the square windows create a retro-modern appearance, reminiscent of the scarce brutalist architecture that can be found peppered throughout the city. 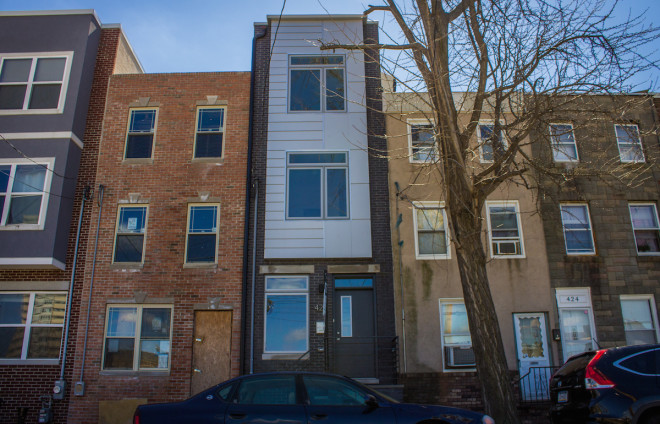 420 Federal Street in Pennsport is subtle, though it’s height is a selling point | Photo: Michael Bixler

The façade of 420 Federal Street in Pennsport is unremarkable, though we find the dimensions of MSJ Contractors’ tall and narrow building to be attractive and distinct. Despite its height, the building fit in well with the already variegated rooflines along the block. 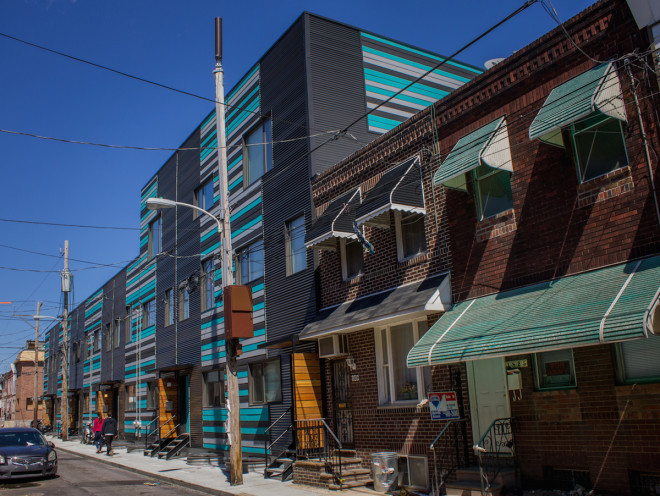 We were excited to see the innovative design on the exterior of the reNewbold development in (where else) Newbold, nominally with the color palette. The row houses, a collaboration between Postgreen Homes, ISA Architects, Valley Green Bank, and LPMG Companies, are clad in gray, black, and aqua blue metal. The variation in height and window placement on these properties provides exciting visual dynamics, drawing the eye up and down along the roof and window lines. This kind of visual movement helps keeps the project from feeling monolithic.