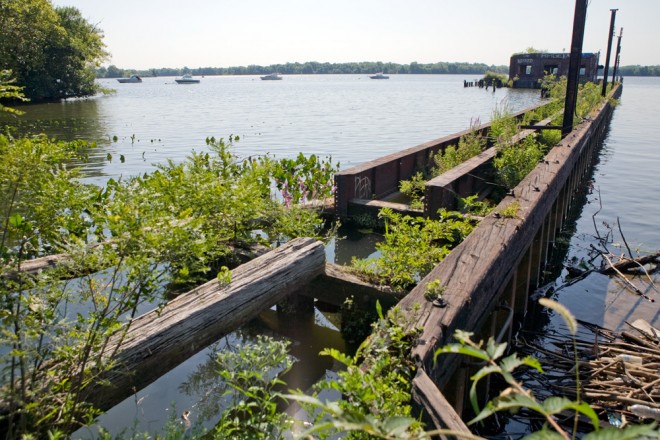 Editor’s note: This story is a collaborative effort between PlanPhilly and Hidden City Philadelphia. It’s the first in a mini-series that will profile the rebirth of the Delaware Riverfront beyond Center City. Earlier this month, Hidden City’s Bradley Maule and PlanPhilly’s Jared Brey explored trail space on the North Delaware waterfront under the helpful guidance of Chris Dougherty of the Fairmount Park Conservancy (Chris is also a Hidden City contributor). The following story, written by Jared with photos by Brad, is the product of that tour.

Philadelphia’s Delaware River renaissance seems to expand by the day, and now momentum is flowing north to Bridesburg, a riverfront neighborhood long deprived of riverfront access.

Starting with the opening of the Race Street Pier in 2011, the Delaware River Waterfront Corporation has had a string of victories connecting Philadelphians with their long-underused waterfront: the Spruce Street Harbor Park, the recently unveiled Pier 53 (now called Washington Avenue Pier), and the revamping of Pier 68 behind the Wal-Mart in South Philadelphia.

Meanwhile, DRWC’s neighbor to the north—the Delaware River City Corporation—is making less heralded progress toward developing a North Delaware Greenway, with public access to trailhead parks along the river, parks like Lardner’s Point, a fishing pier and landscaped trail at the foot of the Tacony-Palmyra Bridge.

Thanks to a complicated land swap that will allow Dietz & Watson, the manufacturer of lunch meats and cheeses, to expand its facility in Tacony, the Department of Parks & Recreation is now in possession of nine acres of new waterfront parkland, adjacent to the former Philadelphia Coke Co. site in Bridesburg.

“Bridesburg has been cut off from the river for I don’t know how long, probably more than 100 years,” said Tom Branigan, director of DRCC, in an interview with PlanPhilly. “They’ve been looking for park space with access to the river for some time.”

Branigan couldn’t say when the design of the new trail might get underway, or who would fund it. He said it would likely be paid for with a combination of city money and grant money.

In the meantime, DRCC is promoting its other projects. This fall, it will hold a 5k run to mark the anniversary of the opening of the Port Richmond Trail, a 1.6-mile portion of the East Coast Greenway, a dreamed-of unbroken path, free of cars, from Maine to Florida. The city is also working to extend Delaware Avenue north of Port Richmond to Orthodox Street, which forms the southern edge of the Coke Co. site. That extension includes a path for bicyclists and pedestrians alongside the main thoroughfare for cars.

But the new park space is truly a coup for DRCC and the community of Bridesburg. Until earlier this year, the land was held by the Philadelphia Authority for Industrial Development (PAID), and it was marketed on and off for industrial use. 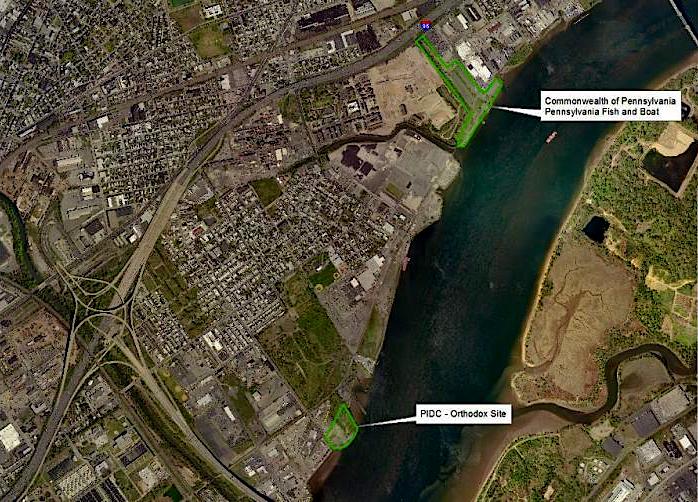 The rest of the undeveloped Coke site, more than 70 acres, is still owned by National Grid, an international utility company with headquarters in London. The vacant land has been a sore spot for adults in the neighborhood—and a sweet spot for teens—for more than two decades.

Now, Councilman Bobby Henon and the Planning Commission are talking with National Grid about marketing the site for active use, and industrial activity is still on the table. But officials say they’re aware that any industrial use will need to be buffered from the surrounding residential areas by less impactful uses.

Whatever happens with the Coke parcel, Bridesburg residents will finally get a waterfront park, with access from the eastern end of Orthodox Street. Orthodox Street is now mainly used by trucks and buses, and by teenagers looking for a hole in the Coke property fence.

“It shows that Philadelphia can negotiate deals like Dietz and Watson to bring both open space and jobs to our neighborhoods,” said Councilman Henon. “In the end, a major manufacturer grows right here in Philadelphia while the community gets much-needed recreation space. It’s a win-win.”

Henon and representatives of the Philadelphia Industrial Development Corporation will hold a community meeting on Wednesday, September 10, at the American Legion in Bridesburg to discuss the details of the land swap. 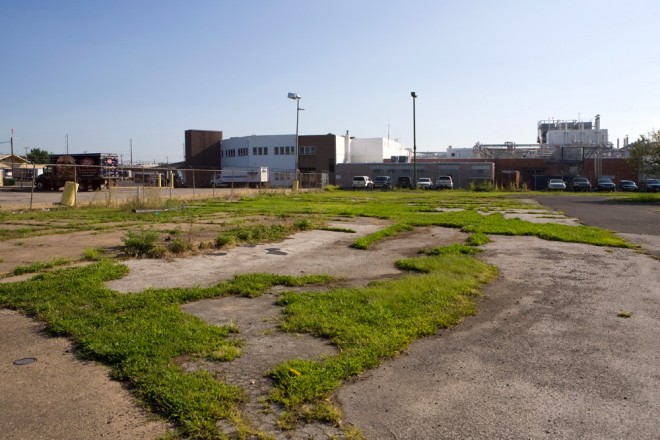 Expanding downstream toward you: as part of a land swap, the Dietz & Watson site in Tacony will expand southward on what is currently fishing and boat access. In exchange, the City has received additional riverfront land for park use just south in Bridesburg | Photo: Bradley Maule 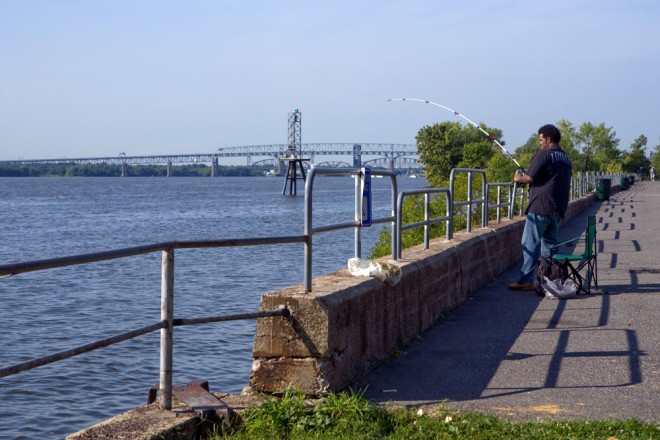 Looking south at the Tacony fishing and boat launch toward the Betsy Ross and Delair Bridges | Photo: Bradley Maule 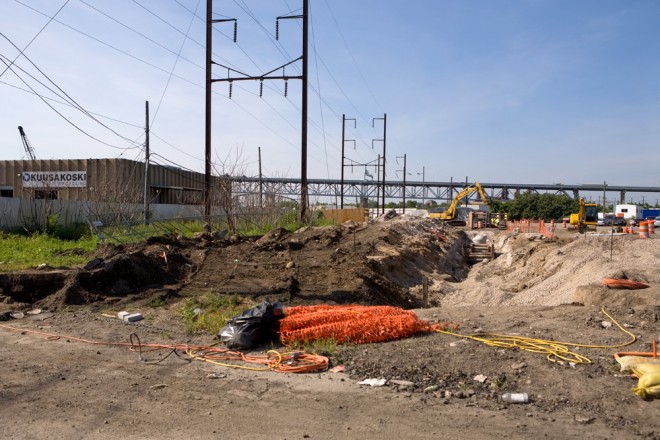 International recycling services company Kuusakoski occupies riverfront property at the foot of Orthodox Street in Bridesburg. A trail will soon pass behind it along the old K&T right-of-way | Photo: Bradley Maule 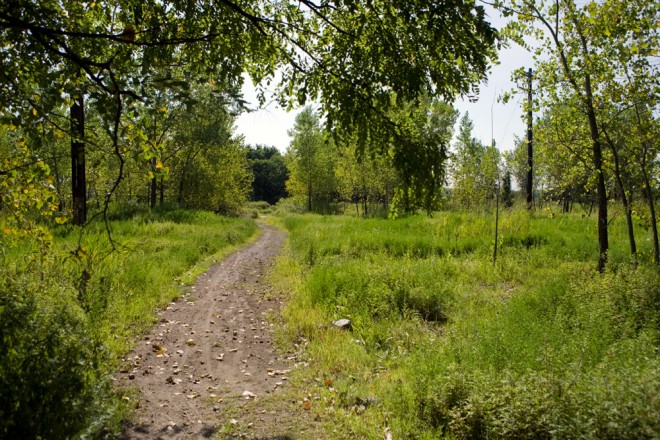 An access trail leads from Orthodox Street to the Delaware River through the former Coke Company site | Photo: Bradley Maule 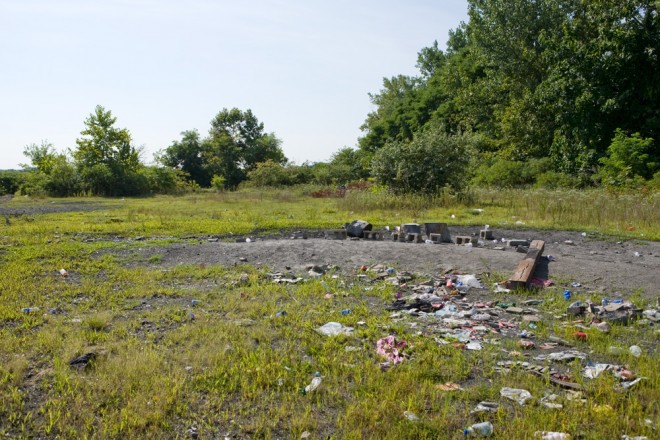 Emerging from the makeshift trail toward the river, one realizes one is not the first to have been here | Photo: Bradley Maule 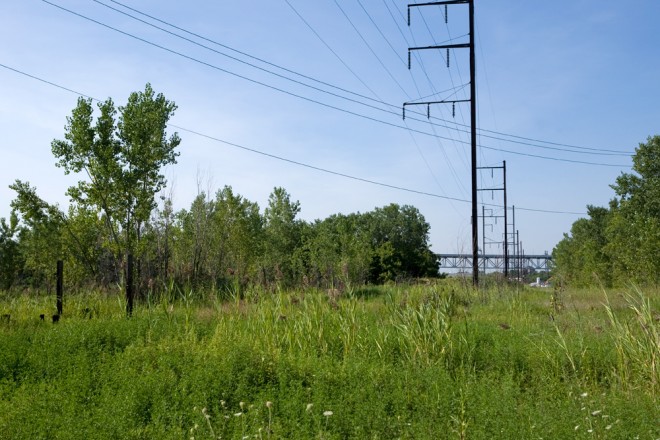 Catenaries mark the former route of the Kensington & Tacony Railroad, which will eventually be home to a trail along the Delaware | Photo: Bradley Maule 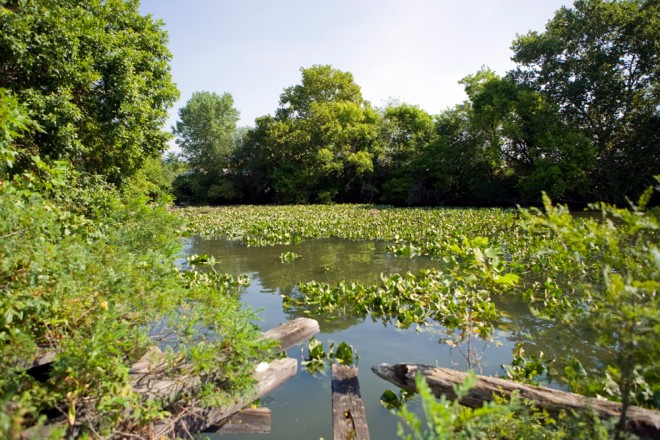 An eddy at the former Coke Company site has been reclaimed by nature, a tidal marsh | Photo: Bradley Maule 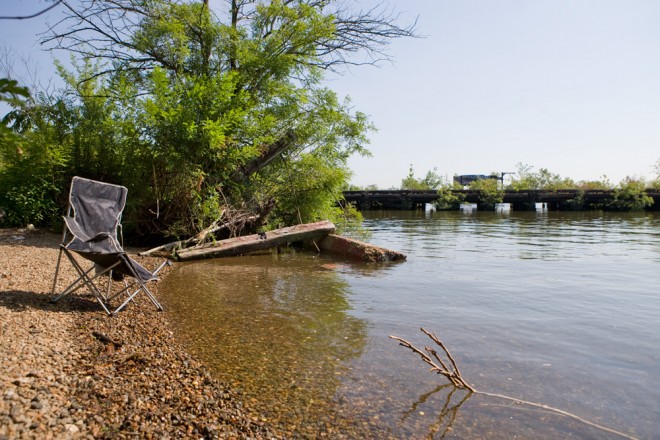