Dreamtime In The Possible City 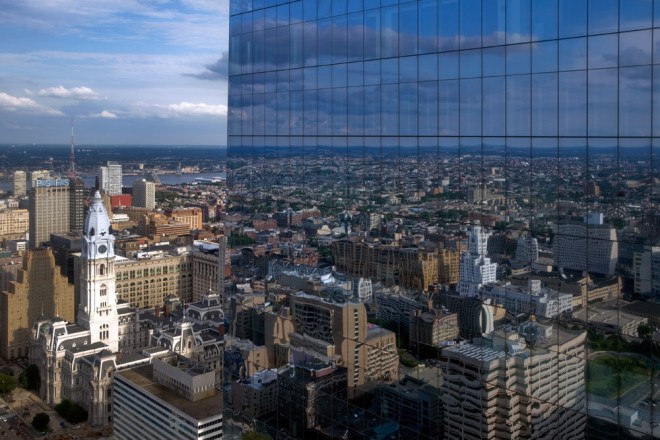 When Brad Maule told me I should join him for Center City Sips at the 51st story terrace of the Bell Atlantic Tower at 18th and Arch yesterday evening, I didn’t know I would also find myself staring out at Mexico City climbing into the Cordillera (with July’s chill coming) or at the edge of the lapping sea. But these are the gifts of the possible city.

The sky was cloudy last evening–long dark clouds that Brad said reminded him of Portland stretched out across the northwestern spring sky–but also clear. You could see out to Limerick; the Delaware from that perch looked nothing like the linear waterfront portrayed on maps, but like a snaking crevice in the earth itself, black and bloated from the wet summer and snarled in green. Nothing–and everything–looked significant. The city’s prosaic violence seemed distant, if not impossible.

The Comcast Center, to the immediate south and east makes a comfortable feeling wall, if such heights and a little wind produce anxiety. But better yet, the sheer glass north wall of Comcast mirrors North Philly, the seams of the glass panels producing little volcanic rises in the background–a picture of sunny Los Angeles, or indeed Mexico City creeping out white and green against the blue sky. 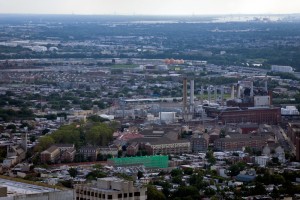 The river to the ocean goes: beyond Toll Bros’ fiefdom, the Delaware River meanders toward the Atlantic, under the Commodore Barry and Delaware Memorial Bridges, visible on the horizon | Photo: Bradley Maule

It wasn’t easy to let go of the view, but I wanted to the see the Oval. After all, a beach awaited. Or did it? Perhaps I misunderstood the media description of the pop-up park at Eakins Oval, but I didn’t notice a beach. I saw children very happily playing in two giant sandboxes; I saw the macadam painted a sand color; I saw playful decorations, toys, and a smattering of people sitting at the tables eating or reading.

Last week, I had encouraged my daughter Lena to go with her friends to check out the Oval’s beach. The heat–can you recall?–was unbearable. She had one thing in mind. “Is there an ocean?”

“An imagined ocean,” I said.

That wouldn’t be good enough for the eighth grade set, I knew. But then last night after passing through the Oval, I crossed to the Art Museum and climbed the steps. The fountain was on, but not filled with water. Instead, as the water pulsated it lapped up midway across the dun-colored floor, receded, lapped up, receded, a girl silhouetted by the setting sun dancing in waves at the edge of the tiny sea.

Postscript: Inside the Art Museum, while viewing First Look: Collecting for Philadelphia (up until September 8) I was reminded of the power of the possible city–a place aware of its own particular role in the world and yet open to cultural influence from afar. The exhibit of a few dozen of the 8,500 works the Museum has recently acquired is moving for its range and emotional tenor. A few of the works by Charles Willson Peale and his sons Rembrandt and Rubens were achingly familiar. I’ve been studying them for the past few years in the research for a novel Lion and Leopard coming out in October. Here are Charles and Rembrandt, jointly the antagonists of my book, in their most human and empathetic guise. And Rubens, who as a young man never became an artist like his brothers, with an almost modern still life done in the 1850s dedicated to his demanding father, who had died a quarter century before. I sense vindication in the dedication.

But the most moving aspect of the exhibit lies in the way it was curated by Alice O. Beamesderfer and Naina Saligram. In this heterogeneous display, connections are made among works, continents, and cultures–and above all, across time. (Note the Mummers costume from England, 1829.) Here the works connect in a most Barnesian way through the infinite emotional spectrum of subject, style, form, material, and tone instead of according to the Museum’s usual silos of place and time.