On South Broad Street, A Lot Of Cool Stuff 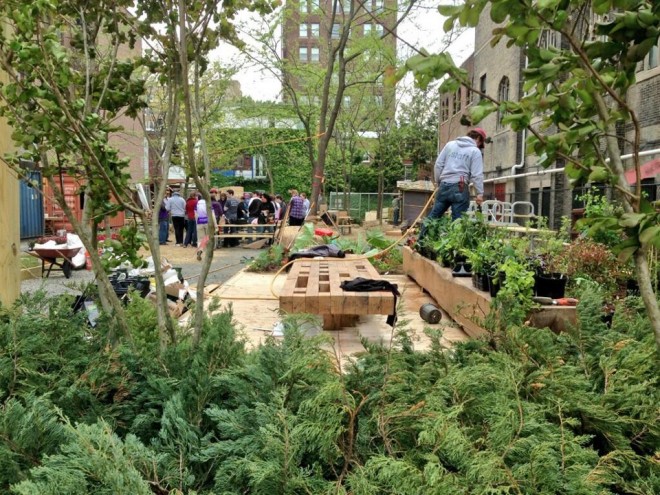 When University of the Arts purchased the five-story City Club in 1987, it had visions of replacing it with a 17-story dormitory for its students. Despite the fact it’s catercorner from the 21-story Atlantic Building and two properties away from the 30-story Center City One, the proposed project was rejected by neighbors who protested its scale. (The lot, at 313 South Broad Street, is currently zoned C4: multi-story office.) Nearly twenty years after the City Club was demolished, the lot remains vacant.

But what a lot it is! The space has been put to good use by creative minds, occasionally closing the glaring gap on the Avenue of the Arts. At the 2008 Design Philadelphia festival, A Clean Break activated the space with a pop up neighborhood; at the just-ended PIFA festival, trapeze artists attracted audiences with Flying High, a grand finale to Fly School Circus Arts’ temporary trapeze school set up on the lot. And now, the empty lot becomes the South Broad summer space.

Directly across the street from the Kimmel Center, Pop Up Garden will feature a beer garden and casual fare from acclaimed chef George Sabatino. Now in its third year, it’s an elaboration of the past Pop Up Gardens at Rittenhouse Square (the Castleway lot) and Market Street (the erstwhile Blue Cross twin tower).

This year’s garden is a collaboration of University of the Arts, the Pennsylvania Horticultural Society, and Avram Hornik’s Four Corners Management, who operates Morgan’s Pier, where Sabatino is chef. The space’s design comes from Groundswell Design Group, who have included repurposed shipping containers and pallets, as well as trees and plantings from PHS.

Pop Up Garden officially opens to the public on Monday (May 20), and a formal reception will happen on May 29, after which time food and beverage service begins. It will remain open through October.