With Views Of Divine Lorraine, Affordable Units On North Broad 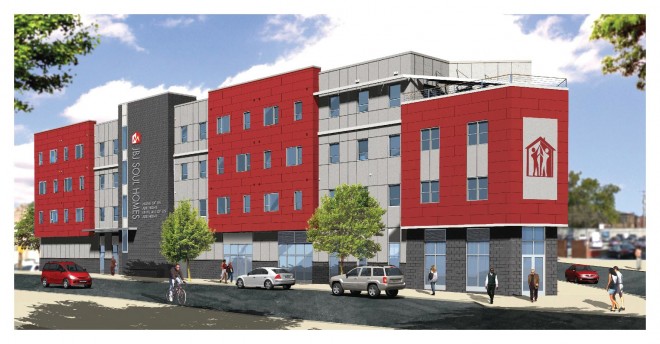 The main entrance to the JBJ Soul Homes coming to the 1400 block of Fairmount Avenue | Image Kitchen and Associates.

From a shared fifth floor terrace of the “JBJ Soul Homes” now under construction on the triangle lot where Ridge and Fairmount Avenues meet North Broad Street, formerly homeless and low-income individuals will enjoy one the best views of the Divine Lorraine. The mixed-use project is the result of a partnership between the homeless social service agency Project H.O.M.E. and the non-profit People for People, Inc. Public funding sources combined with grants from the Jon Bon Jovi Soul Foundation and the Middleton Partnership underwrite the project, which is designed by the firm Kitchen and Associates.

Aiming for LEED Silver designation, the building will offer 12,000 square feet of first floor retail space and 5,500 square feet of office space for thirty Project H.O.M.E. staff. Forty-seven efficiency and eight one-bedroom apartments will occupy the balance of the space.

The JBJ Soul Homes make an important contribution to the continued conversation on the development of North Broad Street. Rev. Dr. Herbert H. Lusk II of People for People Inc., the organization that owns the lot, and the Francisville Neighborhood Development Corporation see the development’s retail space as a gateway to the Ridge and Fairmount Avenue Corridors and encouraging further northern development up Broad Street.

For Project H.O.M.E., whose mission is to end and prevent homelessness and poverty in Philadelphia, the JBJ Soul Homes address the need for affordable housing. “The single most effective way to end homelessness is affordable housing,” says Sister Mary Scullion, co-founder of Project H.O.M.E. “Over time, this project will give hundreds of people a decent home with supportive services that will allow them to flourish.”

Preserving affordable housing is especially important in the Francisville neighborhood, which has seen a boom in housing development. “The area immediately surrounding this project has within the past few years seen eighteen units of market rate housing (with condos starting at $250,000) being built on the 1500 and 1600 blocks of Fairmount Avenue,” says Amy Burns, Project H.O.M.E.’s development director. “Twenty-three new market rate townhouses are planned at 19th and Ridge Avenues.”

This is the second project where the Middleton Partnership has been leveraged to gain additional funding to support Project H.O.M.E.’s strategic plan to end chronic homelessness.

The project’s official groundbreaking is tomorrow, Tuesday, November 13th, at 11AM.