With Ortlieb’s Destined for the Wrecking Ball, An Artist Speaks Up

Editor’s Note: People have feelings for buildings, not that you’d know it most of the time when preservationists are trying to justify why a building should be saved. In the hands of professionals, the language of preservation inevitably becomes technical and precise–after all, feelings aren’t very convincing when you’re talking with developers and city officials. But what often moves a lay person is the sheer physical fact of a building looming out of the past, whether well-preserved and beautiful in its craftsmanship, or run down and decaying, with a plangent sense of the passage of time. By planting a flag that said “I’ll Miss You” on top of a tree growing from the roof of a building in the soon-to-be demolished Ortlieb’s complex, Daniel Davison made those feelings visible, while tapping into the physical daring that is such an integral part of urban exploration and street art. We spoke with the 29-year-old from Atlanta last week.

Hidden City: I was walking by Ortlieb’s about a month ago when I looked up and I said to myself, holy crap, did someone stick something on the top of the tree growing from its roof? It was just after Hurricane Sandy so I wasn’t sure if a white sheet might have blown up there. And then the next day a friend sent me a link to your video. How did you get the idea?
Daniel Davison: My wife and I have gone in a couple times just looking around, and I had always seen the tree and thought it was super cool, just really fascinating. I had never been up to the roof until a week before doing the flag thing. I climbed the tree just for fun, then I got the idea when looking at it from my roof. I just saw the tree and I was like “I want to hang something from it.”

The initial idea didn’t have a message. But the more I thought about, I thought it could be a cool way to express how I felt and how other people would feel about it. And also from the point of view of the building. I just wanted to communicate that. A building can’t have a perspective, necessarily, but I wanted to make the point that the building has been a part of the neighborhood as long as anyone here has been around.

I loved walking through the neighborhood, not really having it on my mind, then turning the corner and seeing it. I don’t thing this opportunity will happen again, a huge tree on top of a building. But I had the idea of doing just a banner before I thought of doing the flag. I like the aesthetic of big buildings under construction that are draped in canvas or plastic. That’s one of my favorite things to see in the city. So before the flag I was planning to go up there with some huge sheets of canvas. It wasn’t all the way planned out, but I wanted to make something big, flapping in the wind. 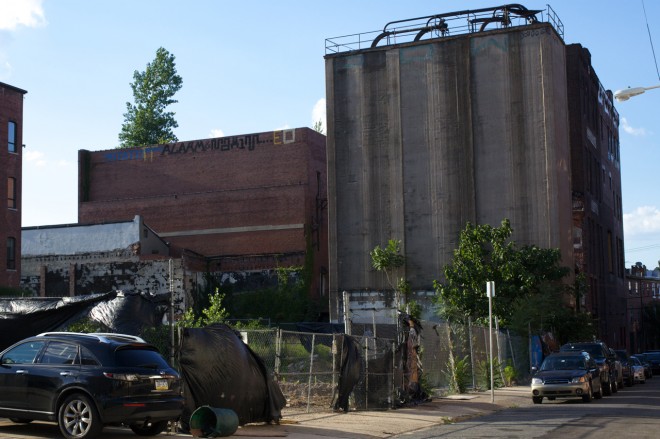 HC: In New York City in the mid-1970s there were some people did interventions on buildings. Gordon Matta-Clark, for example, cut chunks out of vacant industrial buildings. With your work, I don’t so much feel a connection to that. I feel more of a connection to text, since text is alien, there’s something neutral about it. It’s interesting that you’re using this neutral medium for your message instead of putting up a piece of art or a manifesto. What does the banner say?
DD: It says “I’ll miss you.” The original idea was “You’ll miss me,” like from the building’s perspective. But I think from the building’s perspective “I’ll miss you,” more so, can go both ways.

HC: We’ve talked about needing to put buildings in hospice when they’re terminal, when we know they’re not going to be fixed. People have these feelings about the building and don’t usually have any outlet for them.
DD: I have about an hour’s worth of unused footage that I shot in there. It’s all slow motion on a slider. Its very slow and beautiful, not because of me but because the inside of that building is very beautiful. I’ve been real busy, so I haven’t had a chance to edit it. I’ll put that up there when the building gets torn down. It got me really excited about documenting buildings in Philadelphia in an artistic way.

HC: The white flag seems to say “I surrender,” it’s like the building is surrendering. Did you choose white for that reason or are these consonances there fortuitously?
DD: That’s really funny, that hadn’t crossed my mind but it totally makes sense. It was very much a spur of the moment, like “Shit, they’re going to tear this down soon.” There wasn’t a lot of strategy, just going and doing it. The video wasn’t even really a part of it. My wife was hanging out, and I asked her to shoot a little bit. I hadn’t planned to put it out on the internet or anything. Just to document it for fun. Then the footage ended up looking cool, so I cut it together.

HC: The video, which is really excellent, has received a strong reception.
DD: The last time I looked, it had maybe five or six hundred views, which I was really stoked about. It’s really interesting because a lot of my work is music based, and its usually not personal projects. People hire me to direct their music videos. This has had a very different response, which has been much more fulfilling, because it’s a lot more personal.

I’ve gotten several people e-mailing me photos of it like “we stepped out on our balcony, took pictures of the flag,” and sent the pictures via Facebook. So it’s a really cool little local connection. Another guy emailed me just a couple days ago who lives in the neighborhood who developed a Philly-based local search engine called “The Jawn.” He emailed me some photos, and said that it was one of his favorite buildings in the neighborhood. There’s this other dude from the Streets Department who’s chronicling the street art. I’d never met him, but I e-mailed him the video and he posted it on-line.

HC: On a more practical level, what do you think we should do with these buildings?
DD: I’d love to see it used in some way, even if it’s just residential. Or turned into art studios. But practically, with the vibe in the neighborhood, that’s not going to happen. I think it would be great to save at least some of it and incorporate it into whatever they’re going to do. But on the other hand, I’ve been in these buildings a bunch and I know that they’re beyond salvage in some parts. Other sections are not. I’d love to see it incorporated into whatever they do there, but I don’t see that happening. 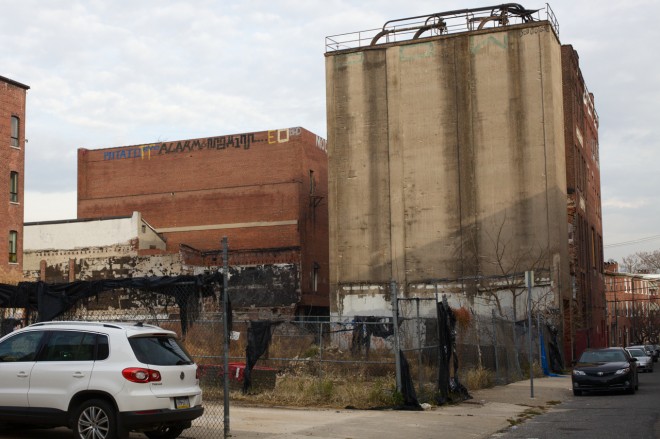 The tree was cut down in November | Photo: Hidden City Daily

HC: You live in Northern Liberties. How long have you been in the neighborhood?
DD: I’m from Atlanta and we–my wife and I–have only been in Philly for about two years. We were in Kensington when we first moved here, at Cambria and Kensington Avenue, then we spent a couple months in New York. Now we’ve been at 5th and Brown for just over a year, at Liberty Lofts, which we love. I absolutely love the neighborhood. It’s sad to see the roots of the neighborhood washed away, and then something new built that doesn’t match the character of the neighborhood at all. I can appreciate some of the modern design, some of the new buildings look fantastic, but when its just that, it makes me sad to see all that go.

HC: This isn’t your first encounter with an abandoned building.
DD: Yeah, I’ve always had an appreciation for it. I’ve always explored abandoned houses and did a lot of mixed media art (in Atlanta). Most of my exploring was rural, like old houses in the woods. There were a few old factories and warehouses that I would get into, but most of it was outside the city.

I’m a musician, so I’m typically gone six or seven months of the year on tour. The band I’m playing with is winding down, though. It’s called Under Oath, we make a hardcore metal kind of music. The band is from Tampa, I’m the only one who lives up here. I haven’t really gotten out into the art and video world here. I direct music videos, so I’ve done a few of those projects in the last six months. But this is my first project in Philly and relating to Philly. The day before I did the flag thing I spent four hours in the building shooting a bunch of slow motion stuff, just kind of documenting the space. That was the day before they were slated to tear it down.

HC: Are you concerned that you’re not anonymous?
DD: I definitely second-guessed myself about posting the video, but then I was like “The building’s going to be gone soon, I don’t think the owner is going to track me down.” And now the tree is cut down. At Third and Poplar there is a little square where they had already torn some of the building down. The tree is still there, chopped up into lots of pieces. The flag is still there. (It was removed shortly after our conversation–editor).

HC: What kind of intervention would you want to do next?
DD: I love exploring old buildings, getting on the roof of any building and I like making art. So if I can get onto other roofs and buildings, that’s the next thing to do. Even if it’s another flag bolted to the side of the building.