Upping The Ante At Hawthorne Park 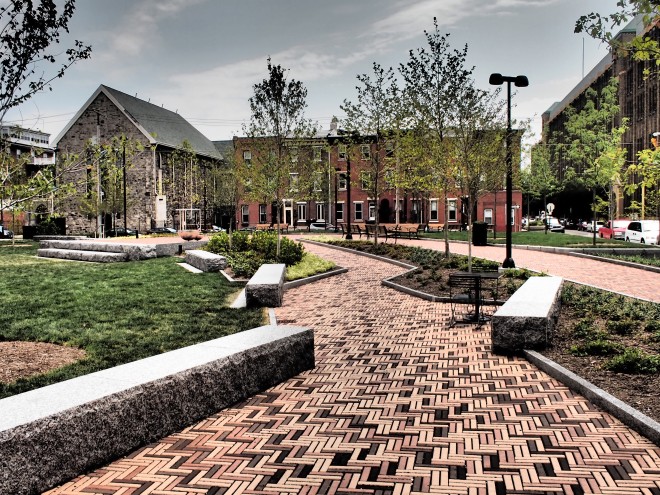 After having just returned from Barcelona, a forward-looking city that still exudes confidence even amidst severe economic crisis, I was having trouble traipsing down Washington Avenue. The weeds were too high and the litter was too thick; though the street was repaved only a few years ago, the pavement and sidewalks were deteriorated. Everything about the place was sloppy, slapdash, and ugly.

In the swelling heat I was feeling sour.

Done shopping for tile, which is what had brought us there, we were back on the all but completely faded bike lane, heading east, when I spotted the new bike signage. Center City that way; the Delaware River straight; and Hawthorne Park over there. Hawthorne Park, of course: it had officially opened while we were away. We had even run a short article on it when it opened, a follow-up to Angela Taurino’s excellent piece on the meanings of the park to a neighborhood putting itself back together. But how had a small neighborhood park made it onto the sign as a destination? 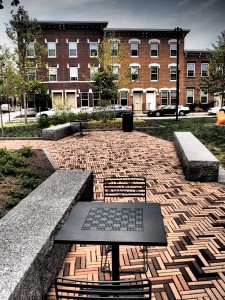 I was riding with Harmon Zuckerman, an old Philadelphian, and a city planner, who most recently was in charge of the master plan for the Lake Tahoe Regional Planning Agency. As we were riding, Harmon was telling me about the urban walkability index–objectively subjective, he called it–when we followed the signs to Hawthorne Park at 12th and Catherine.

Immediately I understood why Fairmount Park officials had put the little park on the bike sign, and it wasn’t just to up Philadelphia’s “Walk Score.” Despite problems and delays in construction, this is the most thoughtfully designed, exquisitely executed new public space in the city, playful and progressive and yet solid (as the great granite slabs that define the spaces declare), dynamic, and smart. The park, which is completely enclosed by buildings, has the feel of an interior courtyard and so feels like a safe place for kids to play freely. Yet because of the general openness of the landscape and the network of paths, it’s a courtyard that extends out in every direction–embracing the city and raising it up all at once. 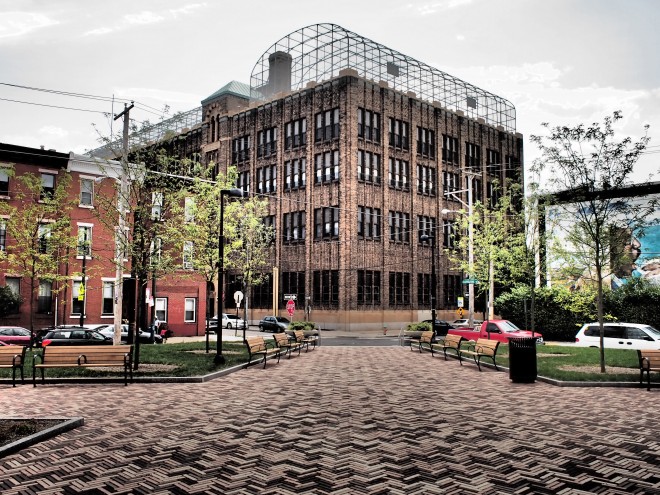 The brilliant herringbone pattern brick path chosen by Lager Raabe Skafte Landscape Architects that runs southeast appears to shimmer in the late day sun; indeed they positioned the path to give visual depth to and dialogue with the massive Moorish revival Frank Palumbo Public School (formerly the Bartlett School and designed by Philly school architect Irwin T. Catharine) on the corner. 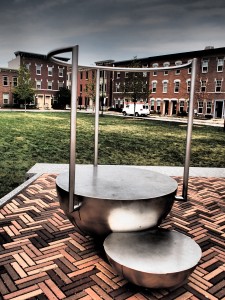 The designers smartly used depth and changes in elevation to create many parks out of one small place; in doing so they separate uses–the large lawn for running around from passive benches for reading, tables for having coffee, sculptor Warren Holzman’s “Object for Expression” for both reflecting on the park’s history related to an appearance by Martin Luther King and for climbing and playing and simple lounge chairs for watching the clouds go by. Harmon and I were testing the Gehry-esque, bright orange lounge chairs when he wondered if they had been designed by a star designer. The label on the back read “Landscapeforms.”

“It should be ‘LandscapePerforms’,” he said, “I like that better,” and indeed in this case it was entirely true.