Confessions of a “Ruin Pornographer” 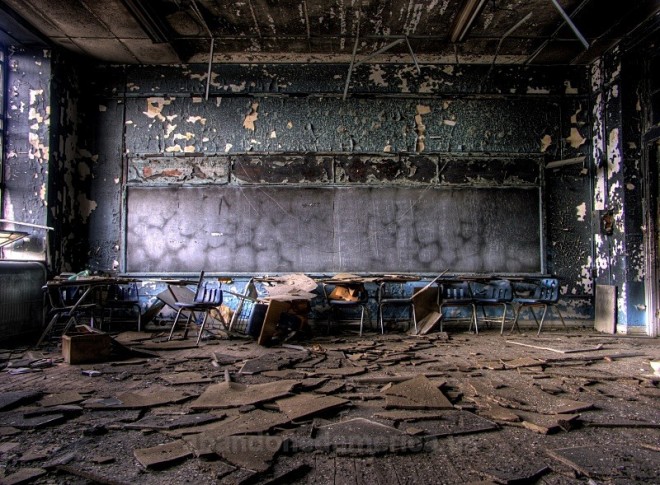 Editor’s Note: Urban exploration has gone from obscure subculture to having its own show on the Discovery Channel. Many people photograph the abandoned places they visit, and long-suffering Detroit has several glossy books devoted to the decay of its once-grand architecture. This in turn has led to charges that both the creators and consumers of these images are indulging in what Vice Magazine was the first to call “ruin porn.” Critics have said that it aestheticizes poverty, that the visual power of the images distorts complicated issues, especially in the hands of the national media. Matthew Christopher is one of the genre’s premier photographers, and has done a lot of thinking about this complex subject. Here is his take on what he does.

There is a profound sorrow inherent in the decay of the abandoned locations I photograph.

If one goes beyond the surface aesthetic of the spaces, confronting these failures on various levels becomes unavoidable. There is a sense of helplessness and injustice about them. Shouldn’t someone be able to save this building? What happened to the people who lost their jobs in that factory? Who is to blame?

For closure’s sake, we feel the need to pin the fault on someone so we can wash our hands of the situation and go back to our regularly scheduled routines. Photographs like the ones I produce can’t even presume to have an answer. They plop an ugly question at your feet, be it wrapped in a pleasing image or not, and just leave it there for you to ponder.

The shattered windows and collapsing floors stare at you wordlessly asking, Why? Why do beautiful things fall to disrepair? Who allowed it? What will be left of us after we are gone? Why must ideals die, and why bother with life if all our endeavors end in oblivion and obscurity? 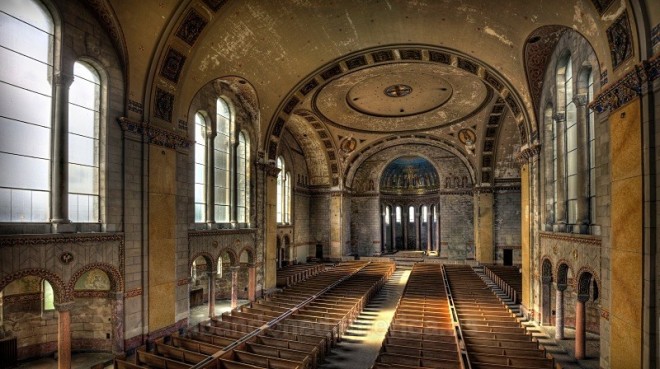 To make matters worse, there are no easy answers presented by the work itself, and happy stories of rehabilitation and reuse are few and far between. The Church of the Transfiguration in Philadelphia was one of the most breathtaking buildings I’ve ever seen; everywhere you looked there were more mosaics, statues, reliefs. Unlike many other places I’ve visited, there was very little structural damage. It could have been saved, but shortly after I visited it demolition began and almost none of the church escaped the landfill.

The sense of loss and outrage is still heavy among the parishioners, and rightfully so in my opinion. This is the norm in my line of photography. We always are racing the wrecking ball, and sifting through the remains of the hopes and ambitions of others. As a viewer, you want happy endings. As a photographer, there are none that I know of.

Writers and bloggers tackle the subject from a myriad of angles but the truth is that the tropes are already in place. The images can speak of depression and despair, urban blight, serve as memento mori, romanticize the past, and so on. The problem is that like the images, it is fantastically complex labyrinth of ideas and touches on everything from socioeconomic conditions to art to the very meaning of life and death. As such, no mere article can ever hope to adequately address the subject or answer the dilemma any better than a picture can.

Nonetheless, as a photographer of ruins, please allow me to answer them as directly as I can: I don’t know why I became obsessed with this line of photography, or why I spend all of my time and money creating images of these places beyond the love I have for doing it. I’ve tried to promote preservation and call attention to the senseless destruction of architectural treasures and I sincerely believe this is an important issue that we have to address if we are ever to hope to move forward as a society. 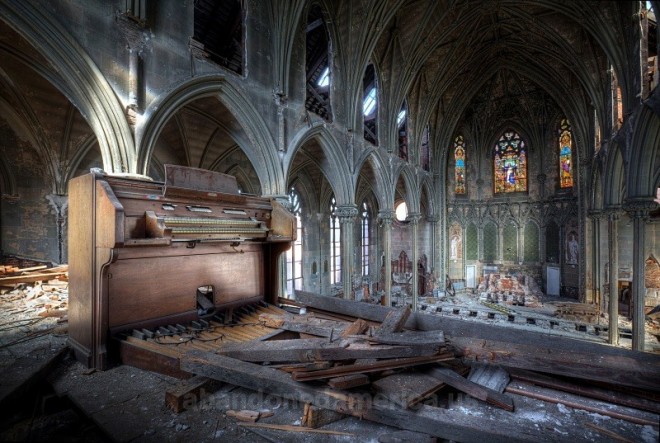 Still, I capture images. They do not actually save places or people. I may sing the praises of people who restore historic sites, but I never have been able to do so myself. I may try to share whatever fragments of history I have unearthed, and present them in the form of art so that people may understand what it is that makes me love them, but I have no clear indication of a single quantifiable effect this has had on anyone or anything. I can’t tell you what we need to do to avert the disasters these sites and their rampant demolition represent. I can tell you that for all I’ve looked for an answer–and I sincerely have tried to find one–the problem is layered like an onion, and no matter how deep you cut into it, there are only more questions.

I have theories, endless theories. Buy me a drink some night and I’ll gladly tell you all the great lessons hindsight can teach when applied to abandoned buildings. But ask me what I did to keep Transfiguration from being demolished, or how I kept them from tearing Taunton State Hospital down, and I’ll probably stare back at you silently for a few long moments before putting my coat on and leaving for the night. I didn’t know what to do. Beyond the limited forum of my website abandonedamerica.us, and trying to periodically poke up activism on the part of people who enjoy my work, I haven’t done much in concrete terms. Does that mean I am exploiting the misery of others? I don’t know that either. Thanks for asking.

These images represent failures. They represent failures of individuals, of businesses, of social systems, economies, towns and cities, states, ambitions and ideals, and maybe even our country as a whole. They also represent my own failures. I have not saved these derelict ruins. I have not saved the people who lost their jobs from the unemployment lines, from poverty, or from any of the other problems caused by the loss of these sites.

When these places are ultimately destroyed, by vandalism and arson and the wrecking ball, it isn’t something I observe with idle detachment. Beyond the erasure of our shared history and heritage, the demolition of these locations represents the disintegration of my own personal past and the relationship I formed with these buildings. I’ve spent thousands of hours locating places, arranging permission where possible, and even more time wandering vacant rooms and corridors alone, trying to reflect the details and nuances through my photography and my words. Every year more buildings disappear, and while I’ve done no formal analysis I would estimate that only five to ten percent are destined for anything but a landfill. 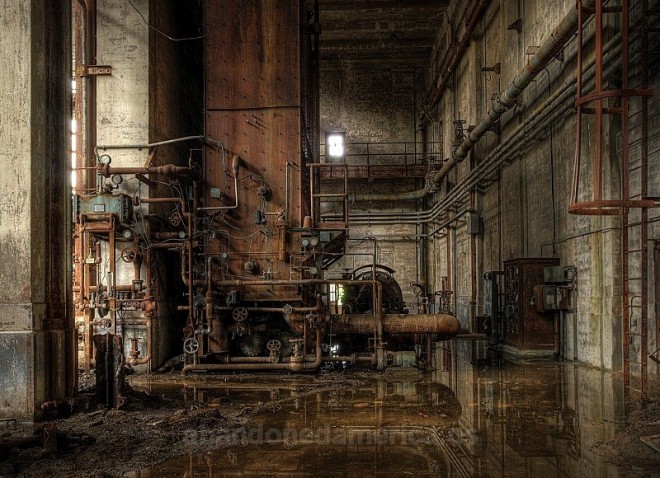 That grief and helplessness affects me deeply and I perceive the eradication of a particularly beloved spot like I would the loss of any other friend. The guilty feeling that I somehow failed the places I photograph, the people who built them, and the people who brought them to life, is something I can never escape. And, perhaps worse, I don’t know if making art accomplishes anything, or if we just create practical justifications for what we like and what we do.

If you ask to measure some tangible benefit that what I do has to justify its existence or validate it as an art form, I can’t. I create documents and records of moments that are imploding around me, literally and metaphorically.

The places I visit aren’t prepackaged and sterilized for our consumption, they don’t have simple messages that fit neatly into slogans, and in an age where nearly everything feels postured to garner acceptance and market a brand, the ragged honesty of decay is refreshing to me.

What I most feel a place stripped of its very identity and purpose asks is acknowledgement and respect, and I take that responsibility very seriously. I do my best to translate my experiences into something that can be communicated with others, and I ask that in sharing my love for what these places have become that you share my loss when they are no more. Like many other art forms attempting to wring transcendence from melancholia, I can’t give you the answers. I can take you with me along part of my own journey and you can infer what you will. Beyond that, you’re on your own. If that makes my work ‘ruin porn’ and the entire genre of the photography of ruins little more than a chronicle of failures on both a personal and a social level, so be it. 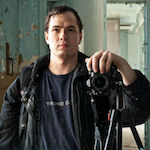