Son Of A Brickmaker, King Of Merchants 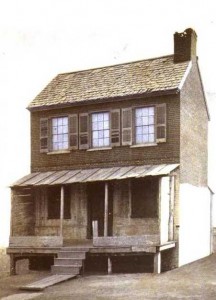 John Wanamaker was born in 1838 in the southwestern part of Philadelphia County. In the days before the 1854 consolidation of the city–and for decades after–the area was called “the Neck,” as it lay between the Schuylkill and Delaware Rivers. Wanamaker’s mother had descended from a Dutch Huguenot family that emigrated from Holland in the 18th century and settled on a farm near Darby. His father’s family came from Germany and settled on a farm in Hunterdown County, New Jersey. Wanamaker’s grandfather later moved to the Neck and established a brickyard there.

Wanamaker’s father, Nelson, married Elizabeth Deshong Kochersperger, who gave birth to John on July 11, 1837. The family lived at a farmhouse at Dunk’s Lane and Buck Road in the Neck, not far from Long Lane, Gray’s Ferry Road and the Schuylkill (U.S.) Arsenal. In the 1830s, this part of the city was semi-rural.

The old homestead must have been agreeable to young John, for it lingered in his memory long after he made his fortune anticipating the urban age. At 78, he recalled it with a flash of homesickness as “a little white house with green shutters and a small garden of marigolds and hollyhocks.” 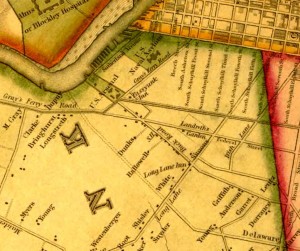 Wanamaker’s home was somewhere around the center of this view. 1843 Philadelphia County map by Charles Ellet, Jr.

On October 28, 1911, some 6000 of his friends, associates and employees gathered to commemorate Wanamaker’s 50th anniversary in business. As part of the celebration, the site of Wanamaker’s childhood home was given to him as a gift. This was a big deal at the time, and was reported in papers across the nation. As memorialized in Jubilee Night: A Personal Tribute to Honorable John Wanamaker by His Entire Business Family (1911), at 18:

We have purchased your birthplace; not the house, for that is no more; but some of the ground on which your home stood. We are going to give you this property to do with as you will. The legal deed is here in my hand. We all wanted to sign that deed—nearly 13,000 of us—for the gift comes from us all, from the newest baby in your business family up to your second self, Rodman Wanamaker. But the Registry office said no; it would block the real estate business to record these names. So we have done the next thing—we have written our names in this Jubilee Book, which goes with the deed, bearing our congratulations and recording our love.

Among his many tearful remarks, the 73-year old Wanamaker replied:

I want to say to you how much I feel the kindly thought of searching out the little old farm where a small house existed years ago and thinking that I would like to have it. I am glad it wasn’t a great mansion, like Mr. Cooke’s at Ogontz, because it would have cost you so much you couldn’t have all had a part in it I am told that you have made this property so valuable that I don’t know what the Tax Office will do when they come to assess it, but I think it might give me serious trouble if they were to put as much value on it as I do! It is a very little house that covers the place, but it was a very little place in which I was born and I was a very little person and didn’t need a large house. It was a part of the old farm of some of my mother’s kindred—the Deshong family. Part of it was the United States Arsenal, which I think my people gave to the Government, if I have the history of it right.

Wanamaker told the people that he would hold the property in trust for the construction of a children’s hospital, but this apparently did not happen (though a new CHOP facility is to be built only a few blocks away). 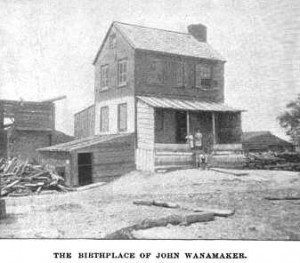 Childhood home of John Wanamaker. From Story of Our Post Office: The Greatest Government Department in All Its Phases (1893), at 936, by Marshall Henry Cushing.

So where exactly was this “little old farm” and its small farmhouse? It’s hard to say for sure. By the late 1800s, Dunk’s Lane and Buck Road had been vacated and the regular street grid of Philadelphia was laid over the area. Long Lane was a main highway into the city from the south, although farmers bringing goods into Philadelphia had to take a long detour to another bridge over the Schuylkill River after the Gray’s Ferry Bridge was swept away (about the time that John was one year old). Wanamaker first walked by himself to the city on Long Lane when he was eight years old. The southern part of the road still remains and is now known as Point Breeze Avenue; it’s the only diagonal road in that quarter.

Yet somewhere around here, in southwestern part of Philadelphia, in the vicinity of 24th and Wharton Streets, John Wanamaker spent most of his childhood and owned the same property as an old man.