Stoneleigh Flourishes With the Gift of Conservation 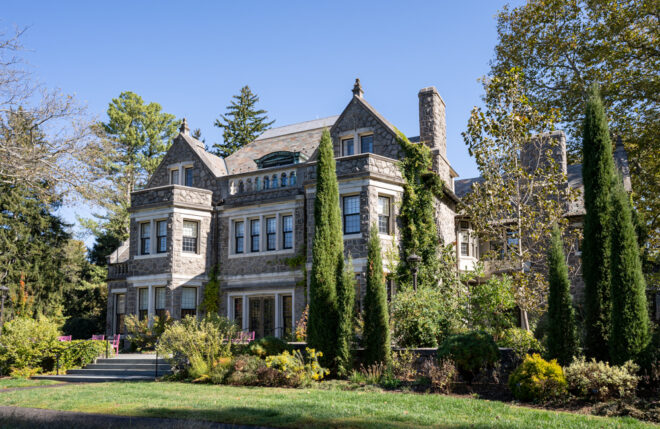 The Stoneleigh estate was gifted to Natural Lands by John and Chara Haas in 2016. The 42-acre property is now a natural garden and open to the public free-of-charge. | Photo: Michael Bixler

The days of landed gentry residing on sprawling estates with staff managing their households and grounds has long since faded into 19th century novels. Which explains why most historic Main Line estates are converted into condos, houses of worship, or private schools. Others are subdivided or demolished. Stoneleigh, a 42-acre estate located at 1829 County Line Road in Villanova, narrowly escaped a similar fate. Today it owes its existence as a free public garden to a family’s passion for conservation and a community willing to fight development.

When Otto Haas, founder of chemical manufacturer Rohm and Haas, and his wife Phoebe bought the estate in 1935, they retained the services of the Olmsted Brothers, the most famous landscape architects of their day, who had been designing and caring for the grounds for the estate’s second owners, Samuel and Eleanor Bodine, since 1908. Haas and his wife were forward-thinking conservationists. In 1945, they founded the William Penn Foundation which protects the Delaware River Watershed. The couple’s dedication to preservation was continued by their heirs, John and Chara Haas, who acquired Stoneleigh in 1964 and raised five children there.

A pivotal decision was made by John and Chara Haas in 1996 when they placed Stoneleigh under conservation easement with Natural Lands, a nonprofit organization dedicated to the protection, conservation, and management of nature preserves in Pennsylvania and New Jersey. “A conservation easement is a legal agreement that has a monetary value. The easement’s value–the difference between what the land would be worth with full development rights and what it is worth without those rights—is determined by a qualified appraiser,” said Mae Axlerod, Natural Lands’ public relations manager. “A landowner may decide to sell the easement at either full appraised value or at a reduced cost, which may make them eligible for a charitable deduction.” As a result, the Haas heirs could have sold the estate when their parents died and still be assured that it would never be developed. Instead, after careful consideration, they gifted Stoneleigh to Natural Lands in April 2016, adding a breathtaking public garden to the organization’s network of 44 nature preserves. 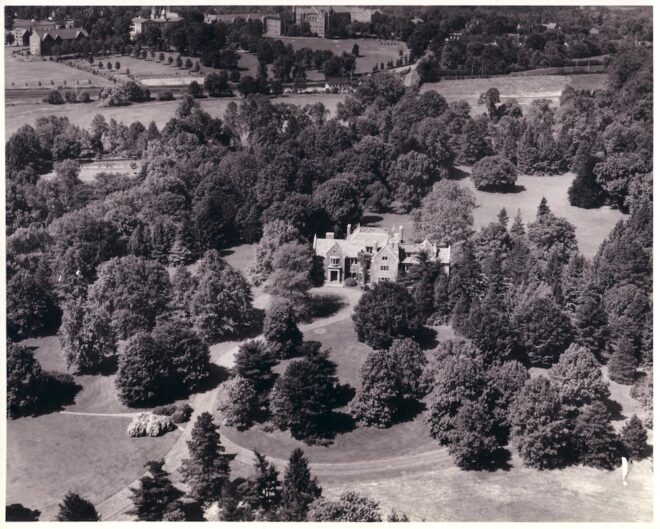 An aerial view of the Stoneleigh estate in 1940. | Photo courtesy of Hagley Museum and Library

“That is the brilliance of the Haas family,” said Axelrod. “They understood that if you don’t plan, you will be planned for.” As a result, Stoneleigh, unlike other Main Line estates, will never be subdivided or destroyed. But it did come close.

In the spring of 2018, the Lower Merion School Board announced plans to seize the site by eminent domain, threatening to bulldoze its 450 trees. In its place they envisioned a new middle school and sports complex.

“Unfortunately, saying ‘No’ to the School District wasn’t enough,” said Molly Morrison, president of Natural Lands. “But the overwhelming response of the community, from Lower Merion and far beyond, sent a clear message: Taking any inch of Stoneleigh would be a devastating loss, one that must be avoided at all costs.” Nearly 40,000 people signed an online petition and 3,000 households displayed “Save Stoneleigh” signs in their yard. But the threat wasn’t fully resolved until the passage of Pennsylvania House Bill 2468 in June 2018 requiring school districts and local governments to seek court approval before taking property by eminent domain if it is protected by a conservation easement.

Six month later, the Lower Merion School Board seized Oakwell, the adjacent estate that was originally part of Stoneleigh. Hundreds of heritage trees, which had never been placed under an easement, are scheduled for demolition in May 2023. 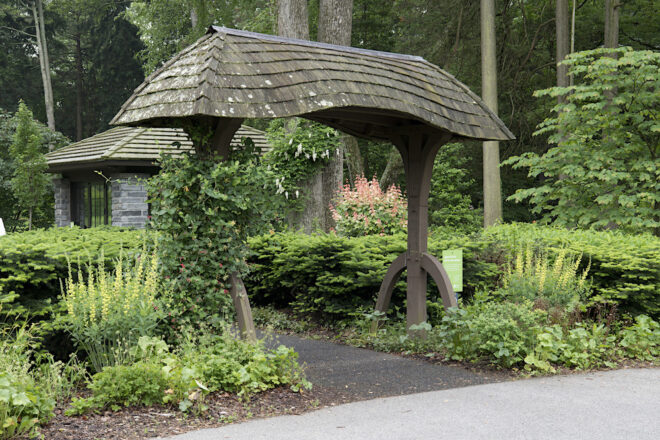 If you experience déjà vu upon arriving at Stoneleigh it is not your imagination. You have been here before. That is, if you are a fan of F. Scott Fitzgerald or Edith Wharton. As the estate’s wrought iron gates swing open you enter the Gilded Age. The illusion of time travel is enhanced by a curtain of old growth trees and hedges surrounding the estate which block out the sights and sounds of modern life. A winding path leads to a turn-of-the-century Tudor Revival mansion designed by Boston architects Arthur Green Everett and Samuel Mead. In keeping with John and Chara Haas’ wish that their home be gifted to a worthy nonprofit, it is now the headquarters of the Organ Historical Society.

Originally filled with authentic French Impressionist paintings, including works by Monet, Cassat, and Renoir which the family donated to the Philadelphia Museum of Art, the mansion now displays copies that reflect its former opulence. But the original architectural bones are still evident in the grand staircase, richly paneled mahogany walls, and le pièce de résistance —a filigree elevator circa 1910. The mansion, which is not open to the public, is open for pre-arranged group tours. Not to worry. The main attraction is truly outdoors.

In addition to the Great Lawn, the grounds are divided into unique, site-specific garden features and varied landscaping under the direction of Ethan Kauffman, the director of Stoneleigh. “Our goal is to highlight the beauty, diversity, and ecological vitality of native plants through dynamic and inspiring displays. We went from 300 native plant species to 3,000, resulting in a huge change in the variety of insects and birds,” said Kauffman. “We now have 750 species of caterpillars, bees, and butterflies and over 108 species of birds.” An abundance foxes, rabbits, ground hogs, and box turtles also inhabit the grounds. 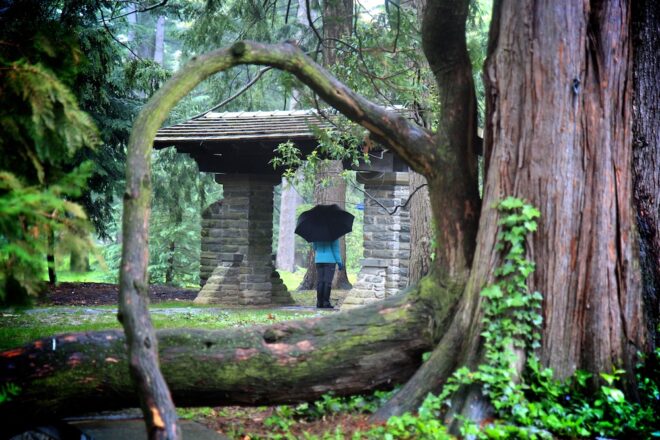 A visitor explores the grounds of Stoneleigh on opening day in 2018. | Photo courtesy of Daniel Barringer, Natural Lands

A smartphone app provides a map and identifies each site. Steps from the mansion you will discover the Bog Gardens, which previously held an in-ground pool. Now, set within the flagstones, are native, semi-aquatic plants, including carnivorous pitcher plants that trap insects and extract nutrients from them. The next feature is the Rockery, constructed in 1925 by the Olmsted Brothers, to create an informal garden room. The most Gatsbyesque area is the Circle Garden, an enormous, round space made popular at the 1893 World’s Fair. One can imagine formal galas under the stars or Victorian garden parties featuring crochet. A Beaux Arts pergola dating back to the early 20th century has been beautifully restored and now blooms with native wisteria. Perhaps the most stunning landscape feature, the Catalpa Court includes a cascading-edge water garden created by Natural Lands in a former tennis court. “The water garden uses plants for filtration and is a habitat for amphibians and birds,” said Sam Nestory, Stoneleigh’s engagement manager. Standing guard is a 150 year-old, 82-foot tall Catalpa tree, one of the largest in the state. If you are a tree hugger, this may be a challenge. The Catalpa has a 204-inch circumference.

To fully indulge in the Olmstead Brothers’ design sensibility, make time for the Meadow Vista, the largest landscape feature that celebrates the natural cycle of plants and wildlife.

“Stoneleigh, A Natural Garden is a space to inspire others to act,” said Axelrod. “It shows what happens when generous landowners, a caring community, and a nonprofit with a depth of experience work together to preserve and cultivate the ecological treasures of our region.”