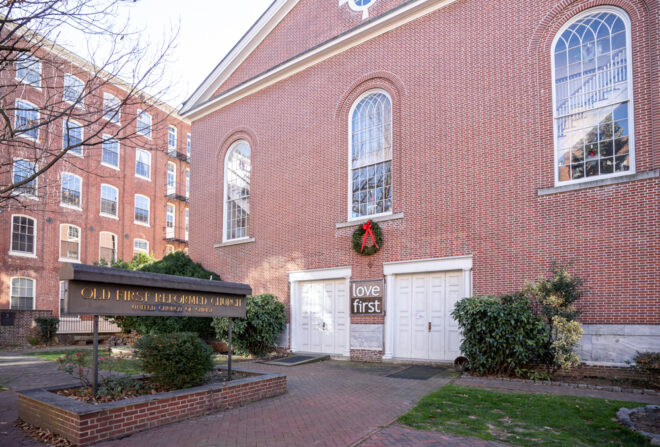 One of Philadelphia’s wealthiest zip codes will soon be home to new residents from the opposite end of the income spectrum. Next spring, ground will be broken in the churchyard of Old First Reformed United Church of Christ at 4th and Race Streets to begin construction of 36 permanent housing units for individuals experiencing homelessness.

The church is not new to the providing of shelter. In 1983, after the Reagan administration cut funding to mental health care facilities, many patients were left homeless. The City of Philadelphia issued a request to congregations to offer emergency shelter to relieve the increase in the homeless population until the City could come up with a permanent solution. “That never really happened,” recalled Reverend Michael Caine, pastor of Old First, adding “We were the first congregation to respond.” Nearly 40 years later, the church continues to offer shelter in its social hall each winter.

Founded in 1727 by German immigrants, Old First’s congregation purchased the property 20 years later and occupied a series of church buildings there for over 100 years. As Old City became increasingly industrial in the late 19th and early 20th centuries, the church relocated first to 10th and Wallace Streets and then to 50th and Locust Streets. The church building at 4th and Race Streets was sold to John Lucas and Company and used for a paint warehouse. 8o years later, the congregation bought it back from the Philadelphia Redevelopment Authority. By that time, the church property, including its ancillary buildings, was listed on the Philadelphia Register of Historic Places, and in 2003, as a contributing property to the Old City Historic District. 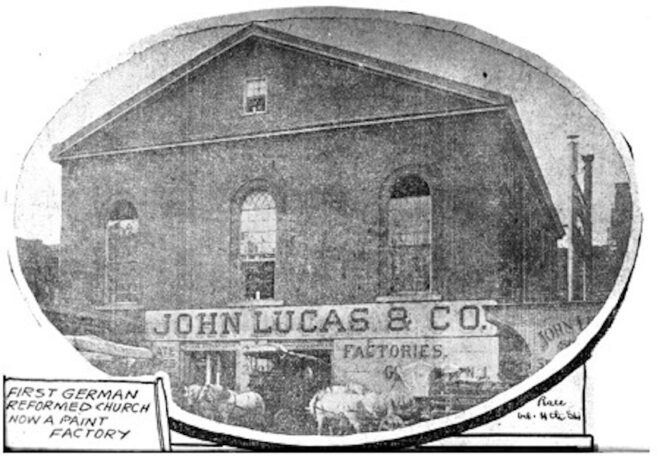 A photograph of Old First when it was owned by John Lucas and Company and used for a paint warehouse. | From the May 27, 1900 issue of The Philadelphia Times

The congregation was drawn to return to Old City partly in the desire to provide a ministry in the heart of the city. Today, it remains a service-oriented and activist church. The long-running wintertime shelter in the church’s social hall is a prime example. Beyond offering a bed in cold weather, the congregation provides a weekly breakfast, frequent dinners, clothing drives, and other amenities to those in need.

Although these services are at the heart of Old First’s credo, it strains the capacity of the church’s facilities. “Our only useable gathering space, the social room, is unavailable six months out of the year because of the shelter,” said Caine.

Those limitations, coupled with the desire to enhance its service, were the impetus to plan the construction of church’s housing project, Old First House. “It’s a double win. We get our social room back, and we’re doing better by the homeless community,” explained Caine. “They get a room of one’s own with a bathroom and a place to keep their stuff.”

Old First’s partner in the project is Philadelphia-based Community Ventures, a nonprofit developer of low-and moderate-income housing that works in cooperation with neighborhood organizations, which provided the experience the church needed for the project. “We had recently completed a conversion of St. Vincent’s Church convent in Germantown into My Place Germantown, which provides supportive housing for disabled, homeless individuals in a community-based setting,” noted David LaFontaine, executive director of Community Ventures.

In addition to offering much needed housing for a vulnerable population, the project will also provide updated and expanded office and meeting facilities for Old First. 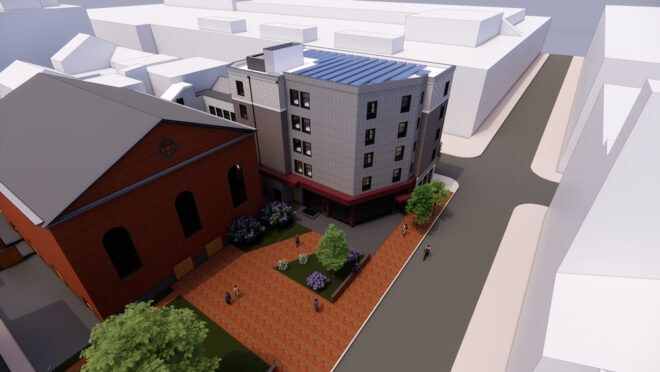 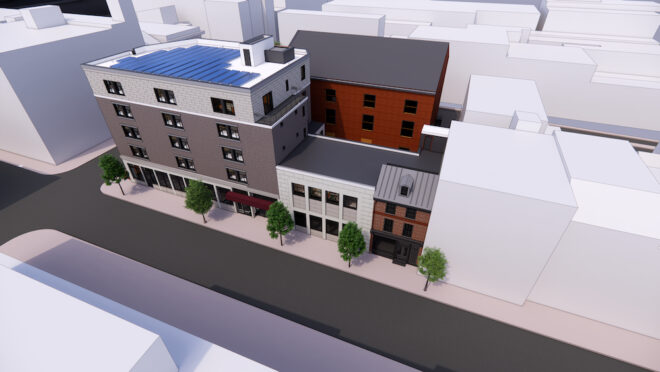 Plans include 36 permanent housing units, a full-service kitchen and other common spaces to build community, and a garden area for use by both the residents and the church. In keeping with the parcel’s CMX-3 zoning (Community Commercial Mixed-Use), there will also be a storefront retail space.

Altogether, it was a tall order for the modest parcel, measuring about 7,000 square feet, some of which is currently occupied by two rowhouses. “It was a difficult fit,” admitted Morris Zimmerman, principal with BWA Architecture + Planning (now O Z Collaborative after a merger with Olaya Studio). “We spent six-to-eight weeks looking at massing studies that were all radically different.”

“We had to break a lot of rules to make everything fit,” he said. “We came up with a housing unit that’s not typically in the repertoire of the Philadelphia Housing Authority–somewhere between a single room occupancy and an efficiency apartment.”

LaFontaine said this project reflects a change Community Ventures has made in its approach, as land becomes more scarce and less affordable. “We started in Francisville around Broad-Fairmount-Girard and Eastern State Penitentiary. In the 1990s, this area had a huge number of vacant lots. We built with low density—twins with side yards. At least three have been torn down to develop more density.” “We didn’t want to spend the money and only serve around 20 people,” agreed Zimmerman.

Still, the problem of those two old rowhouses taking up precious space remained. One of them, the Fox Building, dates back to the 1760s, while the other, allegedly in poor condition, was a replica built in the 1970s. Troy Hannigan, director of development at Community Ventures recalled the church members and the partners asking “How do we fit everything around that? “Then, a board member said,’Why don’t you move them?’”

“The notion of moving it—the first response was, no, that’s crazy,” added Zimmerman. “Then we thought about it and realized, no, it’s not crazy.” 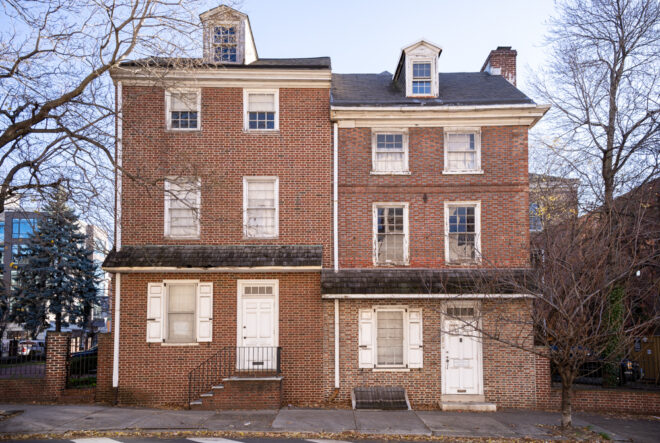 The Fox Building, at right, was built in 1760s. It is listed on the Philadelphia Register of Historic Places and will be moved 20 feet or so north on 4th Street and preserved. The rowhouse on the left is a non-contributing replica built in the 1970s. It will be demolished as part of the Old First House construction plan. | Photo: Michael Bixler

The historic designation, both individually for the church parcel and as part of the Old City Historic District, meant approval from the Philadelphia Historical Commission was required. Approval to move the historic Fox Building to the southern edge of the parcel, and to demolish the other 1970s-era building, which is listed as non-contributing, was received in May, followed by Pennsylvania State Historic Preservation Office approval a month later.

Paul Steinke, executive director of the Preservation Alliance for Greater Philadelphia, recalled the church’s petition to the Historical Commission as “a reasonable and thoughtful approach to balancing the needs of our city’s unhoused and the desire to preserve our historic, urban environment.”

Preservation concerns were on the minds of the architects too. “The responsibility of building in Old City is huge,” said Zimmerman. “To come up with a new building next to a historic church and a bank of houses, many from the 18th century, was an interesting challenge.”

In addition to the five-story new construction for the housing units, there is a plan to restore the Fox Building’s facade to its original appearance. “The house was changed in 1967,” explained Caine. “It originally had a storefront on the first floor. When it is moved, it will again have a storefront,”

The retail space will provide rental income and is envisioned as a way of creating community. “We hope to get a tenant that’s useable by everyone—the congregation, the residents, and the Old City community,” said LaFontaine.

A frequent concern when building in Philadelphia’s oldest neighborhoods is the possibility of unearthing a burial site. According to its records, Old First (then called the German Reformed Church) purchased a burial site in Franklin Square from William Penn’s son, John, in 1741, two years before acquiring the property at 4th and Race Streets, so none of the latter site had been used as a cemetery. “We’ve done archaeology studies to make sure we weren’t going to find any burials,” Zimmerman added. “If there had been, since the site has buildings that were erected in the 1970s, that would have been when things were disturbed.” 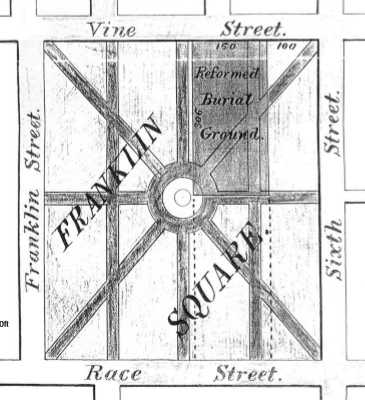 While it seems likely that past residents of Old City wouldn’t be opposed to the project, it wasn’t clear to the partners that current residents would be on board.

“We’ve had difficulties with earlier projects for homeless people. In Old City, partly because of that experience, we proceeded carefully,” recalled LaFontaine. “We went to churches first, then community groups and business associations, and then condo associations. It helped that the church was already operating a shelter. This project was seen as an improvement.”

“The neighborhood has been supportive,” Caine agreed. “They effectively said ‘You’ve done well so far with the shelter, and now you’ll do even better.’”

“I think the project sailed through community, historic, and business approvals because of its mission,” Zimmerman added.

The project planning and most of the funding were mapped out in 2019, but the pandemic put a hold on everything. “We had a preliminary design and estimate in 2019,” recalled Hannigan. “When we got a new estimate, post-pandemic in 2022, it came back $4 million more.”

In response, Caine noted that there has been some “value engineering,” meaning an attempt to bring the building in at the cheapest cost without major changes to the plans.

“We thought, ‘Do we need a full basement?’ So, we shrunk the basement, keeping space for the building’s systems,” said Hannigan. “We reduced the height of the first floor commercial space, which originally was going to be somewhat higher. We didn’t want to value engineer the exterior materials, the passive house certification, or the courtyard plantings. We try to build attractive buildings within very tight budgets.” 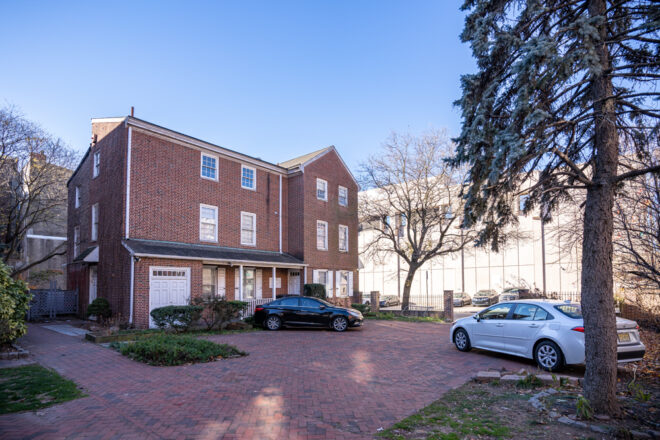 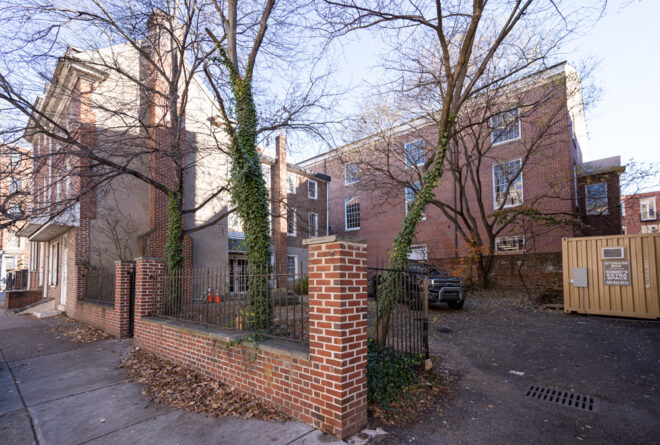 The revised timeline aims for a ground breaking in the spring of 2023, followed by slightly more than a year of construction, and ending with an anticipated opening in the summer of 2024.

The funding is a patchwork of government grants and tax credits. According to Hannigan, these revenues enable a nonprofit like Community Ventures to do what commercial developers say they can’t afford: to build low income housing. It also adds length to a project’s timeline. “These programs are oversubscribed and hard to come by,” said LaFontaine. “Projects can take up to 12 years to accomplish.”

While those funds usually require occupancy by those with incomes below 60 percent of the Area Median Income (AMI) for the region, LaFontaine explained this project is targeting individuals with 20 percent of AMI, which equals a rent of about $200 per month or less. This means the average income of the residents will be about $700 per month, since the government funding requires no more than one third of income must go to paying rent.

After the funding and the construction are completed, the partners envision Old First House as much more than ultra-affordable living quarters. “Creating community is the overarching theme of the project,” said Hannigan.

A third partner, DePaul USA, a national nonprofit organization with a presence in Philadelphia, will provide support services to the residents. And Old First’s members and volunteers will continue to be a presence. “One of the most moving moments in the planning of this project was the congregation’s concern of ‘Can we maintain our role in providing service?’” recalled LaFontaine. “Old First could have gotten $2 or $3 million dollars for the land,” he said. “Instead, it chose to donate it to this project.”