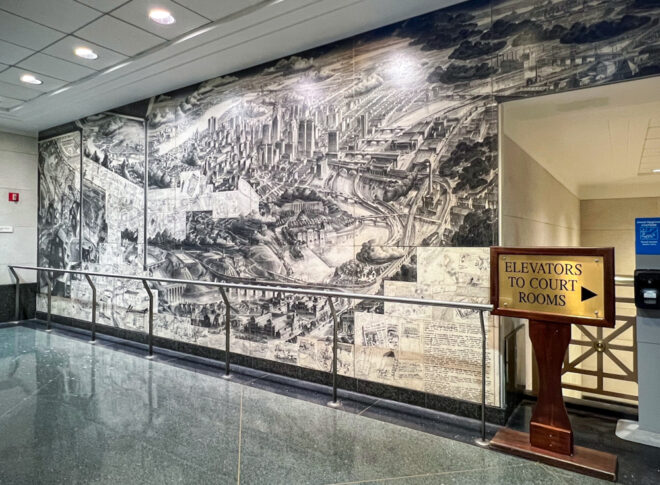 Artist Douglas Cooper installed his mural, an ode to the shifting, urban landscape of Philadelphia, in 1995 at the Juanita Kidd Stout Center for Criminal Justice. | Photo: Michael Bixler

Scheduled for Philadelphia jury duty soon? Anticipating it about as enthusiastically as you would a root canal? Take heart. Your upcoming visit to the Juanita Kidd Stout Center for Criminal Justice on Filbert Street comes with an unexpected perk. Beyond that six dollar check and the Reading Terminal Market lunch discount, there is an opportunity for time travel. Walk through the metal detector and pause to consider the magnificent panorama of Philadelphia extending before you. Hand-drawn in charcoal, the black and white mural stretches from Belmont Plateau to Hog Island, covering 96-feet along the corridor wall and arching over two courtroom doorways.

The bird’s eye perspective is breathtaking. The rendering of the buildings is at once realistic and dreamlike. The mural was created 25 years ago by artist Douglas Cooper, a professor of architectural drawing at Pittsburgh’s Carnegie Mellon University. It was commissioned by the City’s One Percent for Art program. The Courthouse Mural invites jurors and other visitors to the Center for Criminal Justice to glide over the spires and rooftops and waterways of Philadelphia, Peter Pan style, to explore a place they think they know.

At first glance, everything seems as it should be–or as Philadelphia would have appeared in 1995. The mural is a kind of giant map. Cooper adopts the cartographic traditions of urban view maps that were popular in the 19th century. Civic boosters commissioned view maps, which present the layout of streets and the elevations of varied buildings from a bird’s-eye perspective, to promote their growing towns. Insurance companies and fire departments relied on them to pinpoint the locations of residential and commercial structures. 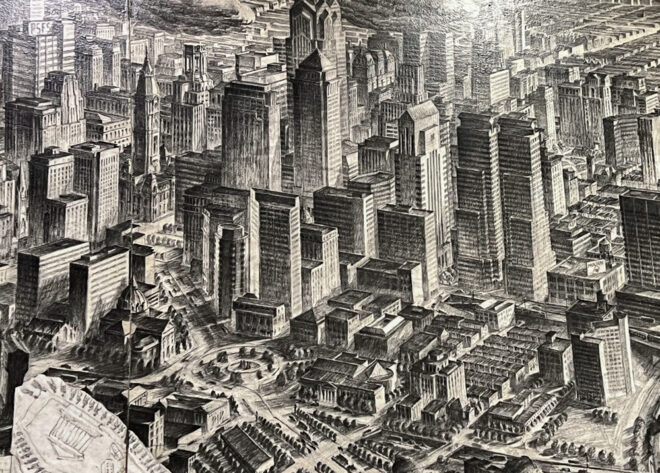 Detail of Cooper’s drawing of the Philadelphia skyline in the mid-1990s. | Photo: Michael Bixler

As with poring over an old map, the mural is fun to use to spot old, familiar places: Philadelphia’s defining grid of streets framed by two curving rivers. Neighborhoods of cozy, tightly-huddled rowhouses. Soaring glass skyscrapers–or at least the two chevroned towers of Liberty Place, the city’s highest buildings in 1995. The Philadelphia Museum of Art and the Philadelphia Zoo across the river. 30th Street Station and, at the mural’s far end, Philadelphia International Airport and the Navy Yard. At the long wall’s center, just as it in the real city outside, the ornate stone tower of City Hall rises over a courtroom doorway with William Penn gazing down and presiding over the workings of justice below.

But wander a bit longer through Cooper’s precisely rendered streets, and you will soon get lost. The crisp black-and-white world suddenly dissolves. Angles shift. Buildings totter. Streets you think you crossed a few blocks back appear again. But where did Liberty Place go? When did the skyline turn so Art Deco retro? What is with that spine of elevated train track, with the curving hump of train shed and sprawling, turreted station attached to it? Weren’t Broad Street Station and the so-called Chinese Wall torn down in 1953? And while you can still see modern jets coming in to land at the airport, a streamlined steam locomotive is departing from 30th Street Station.

Keep on gliding alongside those puffy dark clouds. Perspective shifts again, subtly, imperceptibly. So does time. Eventually, you stumble upon a sprawl of tented pavilions up in Fairmount Park, and realize you are on the grounds of the Centennial Exposition of 1876. “Where am I?” you well might ask. “When am I?” is the more pertinent question.

The true marvel of Cooper’s murals–he has created similar panoramas in his adopted hometown of Pittsburgh, as well as in New York, San Francisco, Frankfurt, and Rome–is not their geographic scope, but their mind-bending temporal anomalies. Cooper cleverly keeps his geography seamless. 1876, 1935, and 1995 coexist, all in the visual equivalent of present tense. One era blends into another, and all seem equally vivid and equally contemporary. “There are no divisions,” said Cooper to me in an interview a few years ago, “which makes people think over why things are as they are, why there’s not a continuity of time. It’s like a curveball. People swing at it. I thought it would be a good way to show that things do change over time.” 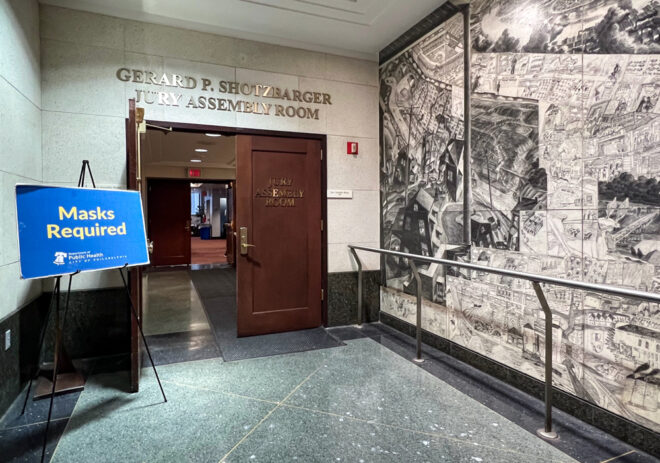 The most poignant testimonies to the past, though, appear in patches of illustrations and hand-lettered captions, looser in style, that weave throughout the more formal and refined architectural display, staccato counterpoint to the lush sweep of the whole. Street maps. House plans. Quickly-sketched black-and-white vignettes of ballgames, birthday parties, and animals at the zoo. Place memories and visual anecdotes annotated in rough hand-lettered captions. Cooper, a stranger to Philadelphia, made the mural in collaboration with elderly habitués of two local senior centers, Germantown’s Center in the Park and South Philly’s Marconi Center. To learn about Philadelphia’s past, about meaningful places now vanished, Cooper combined interviews and drawing exercises. He asked the seniors to draw maps and floor plans of the places they knew. And as they drew, as they plotted out the succession of shops along a street or retraced the floor plan of their childhood home, the stories attached to those particular places, many long buried in the recesses of their brains, started spilling out too.

These individual memories accentuate and enliven the mural’s temporal anomalies. Cows graze in Fairmount Park. Following the path of panels that snake through the mural, you encounter the individual lives and experiences that are the true pulse of a city. Some of Cooper’s participants reminisced about events of historic significance, like the landmark decision to integrate Girard College, or encounters with now-mythic figures like Paul Robeson, John Coltrane, and Franklin Delano Roosevelt. Others waxed more personal, like hardships endured working in the Navy Yard in World War II or high jinks stepping out for a night of music on Ridge Avenue. Cooper was especially charmed by a “trio of brassy ladies” who recounted the night that one of them, a dead ringer for Billie Holiday, had an altercation with the real Lady Day at Ridge Avenue’s famed Blue Note.

And then there was the woman who recounted her life-changing encounter with an angel. “This was a story that no one believed,” said Cooper. “Even her minister treated it as something that hadn’t happened. I listened to her story, and I put it in the mural. This verified that it happened.” 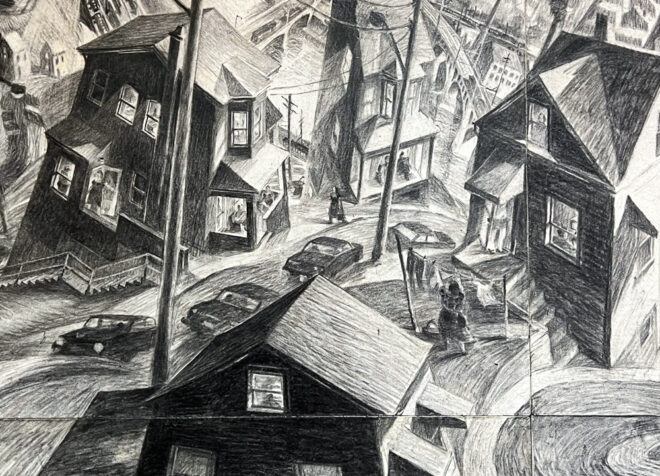 25 years later, most of the storytellers and mapmakers who contributed to the court house mural are no longer around. Sadly, many of the buildings and institutions that made stretches of Ridge and Germantown Avenues, of South Broad and West Market Streets, under the El, bustling by day and hopping at night are gone as well. The mural preserves them. Those wispy lines of charcoal, images and words, animate Philadelphia like friendly ghosts. The mural reveals a profound fact about urban geography: a city’s streets and neighborhoods, its stores and houses, its offices and factories, are all repositories for thousands, perhaps millions of individual lives and experiences—some extraordinary, most ordinary. The past pulses through every one of these individual, very human stories. Small though they seem against the flow of the river, the monumental scope of terrain and architecture, past and present, and the long span of history, these memories give the mural, and the city, its life.

While jury duty may rank alongside a tax audit as an experience best avoided, that “one day-one trial” is also a great democratic leveler, an experience that brings Philadelphians from all the various neighborhoods, professions, income levels, ages, and ethnicities together for a common purpose. Cooper hoped that his mural would encourage jurors to swap memories as they time traveled through the charcoal city together. When the mural was new, Cooper spoke to one woman who felt anxious and isolated from her fellow jurors until they all stopped in the hallway on a break. People began pointing to the places they knew and then, noticing the personal stories, offered their own memories of certain politically-charged events, offering their own versions and interpretations. The isolated woman joined in. The city and its history belonged to all of them, she realized. The mural helped those jurors all find their own places on the map.

Today, jurors may bond over discussing all that has changed since the mural was made. In 1995, the pinnacled skyline–the pointy tops of Liberty Place One and Two and BNY Mellon Center–was still a novelty. The break with tradition was an optimistic declaration of Philadelphia’s expectations for the future. In 2022 the mural stimulates a tinge of nostalgia for that era. Viewers may be struck not just by what’s missing–no Comcast Towers, no Cira Center–but by what forgotten, iconic buildings that still stood, solid and definitive, at the end of the last century. On the mural, Veterans Stadium, JFK Stadium, and the Spectrum grace the far south end of Philadelphia like a trio of geometry exercises. The monumental Philadelphia Convention Hall and Civic Center dominates a section of West Philadelphia now given over to a veritable city of high-tech health care. From today’s perspective, contemporary Philadelphia of 1995 is already looking quaint.

Cooper is well aware that as his mural ages and that it will become more historical record than time-bending encounter between past and present. “These murals do get at the way people attach memories to places, and that is more universal and independent of time,” he said. “If there’s resonance for future generations, the resonance is in that deeper structure, the way in which people tend to remember cities.”

Ann de Forest writes frequently about design, architecture, and the built environment. She is co-editor of Extant, the magazine of the Preservation Alliance for Greater Philadelphia. Her short stories, essays and poems have appeared in Coal Hill Review, Unbroken, Noctua Review, Cleaver Magazine, among others. She is the editor of Ways of Walking, an anthology of essays published by New Door Books in 2022, a project inspired by her having walked the entire perimeter of Philadelphia twice.