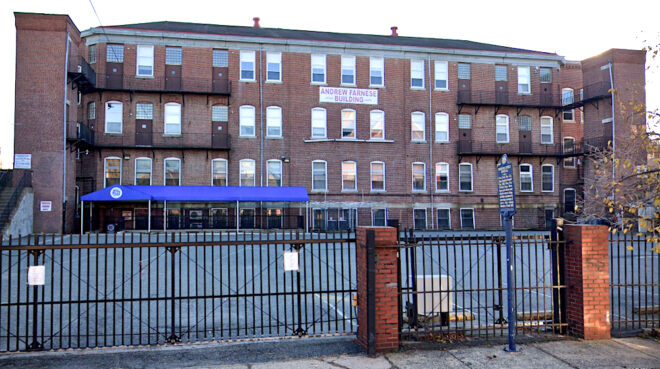 The Philadelphia Historical Commission held its final meeting of 2022 on December 9. The former St. Paul’s Roman Catholic Parochial School and its adjoining parking lot that covers a long-demolished Civil War hospital were added to the Philadelphia Register of Historic Places.

The handsome, three-story brick school building at 914-26 Christian Street was designed by architect Edwin Forrest Durang and constructed in 1905. Durang was an important ecclesiastical architect in Philadelphia, and his buildings largely defined the Catholic Church’s presence in the city at the turn of the 20th century. Many of his buildings are listed on the local historic register, largely through the efforts of Celeste Morello who penned this nomination as well.

The building was originally a private Catholic school that was popular with families in the Bella Vista neighborhood. It was sold in the mid-1990s by the Archdiocese of Philadelphia and now houses the Christopher Columbus Charter School.

Serving as the school’s parking lot is the site of the former Moyamensing Hall. Built in 1834, the hall hosted most of the governing activities of Moyamensing Township. The township covered a three square mile area and had its own commissioners and police force before becoming part of Philadelphia in 1854.

The hall eventually transitioned into the Christian Street Hospital during the Civil War. On its founding in May 1861, the hospital became the very first U.S. Army hospital. During the Civil War, doctors at the hospital conducted historically important experiments in the treatment of “nerve disorders.” The building was demolished in 1957, and the parcel became a parking lot. 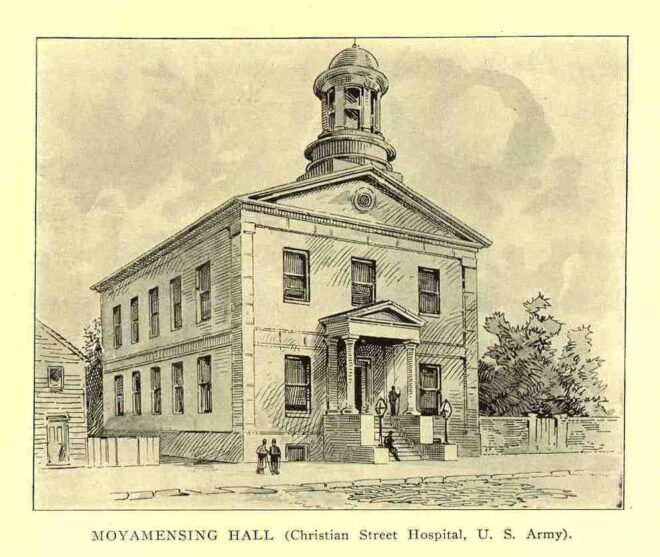 For readers unfamiliar with Philadelphia’s historic designation process, sites are nominated on the merit of meeting certain historic and cultural criteria established by the U.S. Department of the Interior. There are many criteria, and a site can be designated if it is found to meet any single or combination of these criteria.

In much of her nomination, Morello focused on the archaeological merit, or Criteria I, of the parking lot, arguing that since the site was both the location of the main municipal building for the burgeoning Moyamensing Township, and later a busy Civil War hospital, it would be likely to contain substantial, historical material. Designation of a demolished site, under Criteria I, does not preclude future development on the parcel. It only ensures that the Historical Commission has the legal option to require the developer to retain an archaeologist before construction begins

During the ensuing debate, some members of the Historical Commission shared their skepticism about both the rigor of the nomination (no archeologist was involved in Morello’s submission) and with the merit of Criteria I itself. Commissioner John Mattioni commented that the phrasing “may be likely to yield important information, but I could find that outside of my house right now.”

Historic preservation activist Oscar Beisert of The Keeping Society of Philadelphia, a regular at Historical Commission meetings, spoke during public comment. “I am a little bit frustrated about the conversation I am hearing. The Architectural Committee has decided this is an important example of Durang,” said Beisert. “This is getting really silly if we are arguing over whether the school is eligible. It is a design by Durang and was important in the community.” Beisert added, “And we’re wondering if the site of a Civil War hospital is eligible. If it isn’t, what would be?” 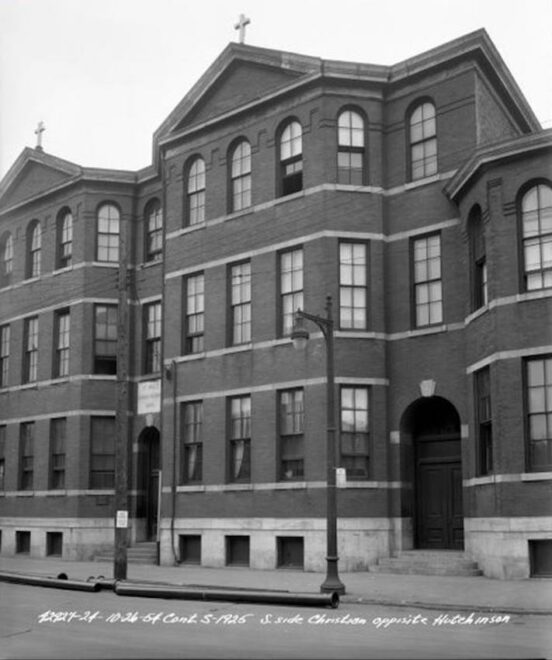 Meeting attendee Deborah Gray commented, “This discussion is disturbing because Criteria I either exists or it does not exist.” Commissioner Emily Cooperman concurred with Gray. “It is not about digging up the whole city. We know there was an important institution here.”

Ultimately the nomination passed by 11 votes in favor of designation, with Commissioners Mark Dodds and John Mattioni dissenting.

The unusually short meeting was mainly focused on old business and continuance requests. In early 2023, the Historical Commission will review nominations for Piers 38 and 40, Point Breeze Gas Works, several church-related buildings, and others.