Women’s Committee of 1926 Brought Historic Preservation to the Masses

In 2026, the 250th anniversary of America’s independence will be celebrated. That year will also mark the centennial of the creation of the Women’s Committee of 1926, a milestone in Philadelphia women’s history and an important contributor to the city’s historic preservation movement.

John Wanamaker had originally proposed celebrating the sesquicentennial of the Declaration of Independence in 1916, but attempts to plan for it was delayed by World War I and the Spanish flu pandemic. On November 1, 1920, Mayor J. Hampton Moore invited a group of the city’s elite to plan the celebration, and they organized a committee of 100 to proceed under the formal title of the Sesqui-Centennial Exhibition Association. The participants organized themselves into a Sesquicentennial Planning Association (SPA) with various committees, among them the Negro Affairs Committee and the Women’s Committee chaired by Elizabeth Price Martin. The SPA addressed the two basic questions of the celebration’s location and its purpose. Disagreements about both became immediately apparent. 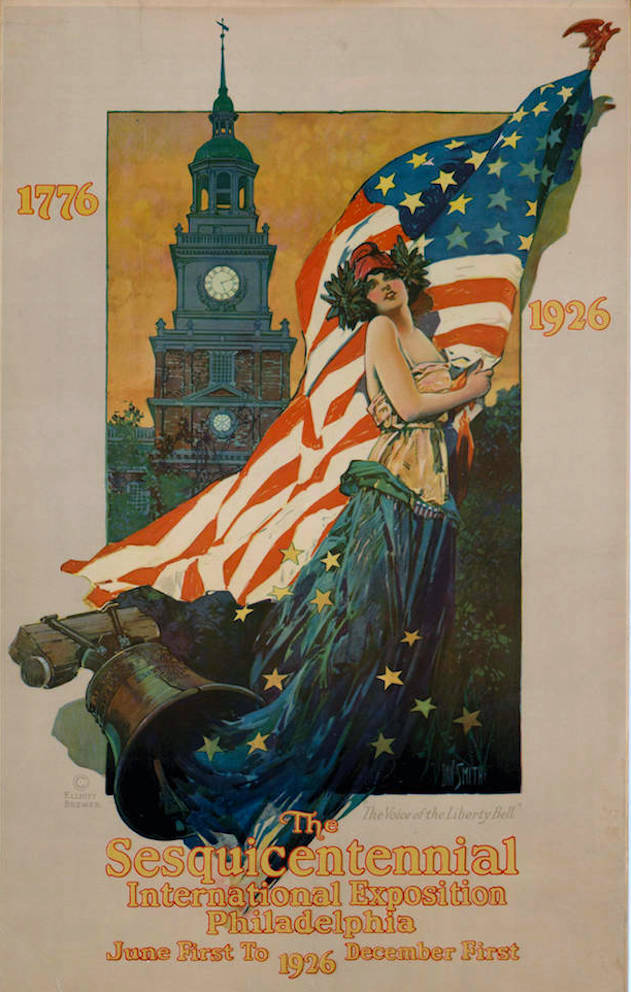 Regarding location, various sites were proposed around the city, while others argued for returning to the 1876 Centennial Exposition fairgrounds in West Fairmount Park. Ultimately, the SPA, inspired by Chicago’s Columbian Exposition of 1893, settled on the new Benjamin Franklin Parkway for the exhibition buildings and area around Independence Hall for its historical significance. The Parkway made sense for the temporary structures as it recently had been cleared of buildings. At the time, only the Bell Telephone Company Building at 1835 Arch Street had been completed, while the Philadelphia Art Museum was racing towards completion at the Parkway’s opposite end. 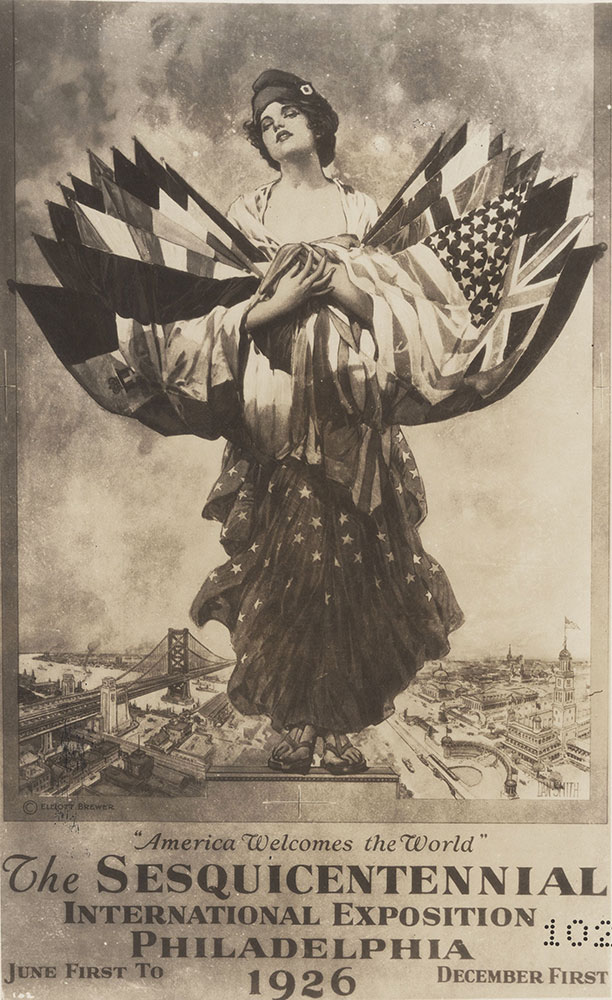 The official poster by Dan Smith for the Sesqui-Centennial Exposition of 1926. | Image courtesy of Print and Picture Collection, Free Library of Philadelphia

The purpose of the celebration provoked greater discord. The Chamber of Commerce for Greater Philadelphia and real estate interests favored an international event to draw free-spending tourists, but this was opposed for several reasons. Some thought that the City could not afford it as there were already major, and costly, improvement projects either planned or underway such as subway construction, a municipal stadium, port modernization, and the City Hall Annex. Some believed that it would be a boondoggle for politically-connected building contractors. Others felt that the concept of such celebrations had become obsolete after William McKinley, who had been nominated here for president, had been assassinated at the Pan-American Exposition of 1901 in Buffalo, New York. However, the most common and heated objection to an international fair was that it would detract from the historic event that the celebration was intended to honor. Many preferred a low key “Old Home Week” observation centered on Independence Hall. Feelings against the international fair ran so strong that a 15,000 member Anti-Sesquicentennial Celebration League had formed.

In 1922, the SPA reached a compromise: “Old Home Week,” plus an international exhibition on the Parkway. It thus appeared that the wrangling was over, but it was not to be. A 1923 election ushered in a new mayor, W. Freeland Kendrick, who was beholden to the Vare Brothers contracting company. Mayor Kendrick, assuming office in 1924, tore up the plan, appointed himself chief planner, and declared that the international event would occur in South Philadelphia, in a 1,000-acre freshwater intertidal wetland known as The Neck to old-timers and as Varesville to his skeptics. The City would lease land there from the Vare Brothers and improve it for them while paying rent. The City owned less than half of the site. 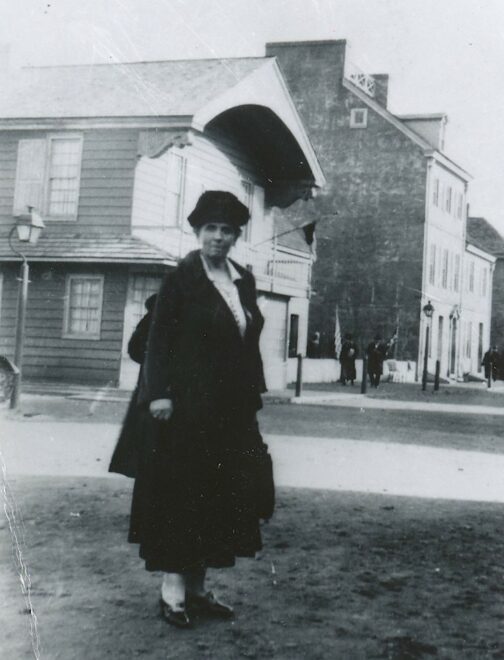 Elizabeth Price Martin, chair of the Women’s Committee of 1926, in front of her Old High Street exhibit during the Sesqui-Centennial International Exposition. | Photos courtesy of Historic Strawberry Mansion

Mayor Kendrick now had to figure out how to tie his Varesville project to the Declaration of Independence to give it at least some semblance of what the celebration was supposed to be about. A solution was offered to him by Elizabeth Price Martin, who proposed creation of an Old High Street exhibit on the fairgrounds.

Martin thrived on leading public betterment projects. Her resume including founding and presidency of the Garden Club of Philadelphia and the Rittenhouse Square Flower Market for which she was inducted as a member of the British Royal Horticultural Society. She had served as president of the Pennsylvania Emergency Aid during World War I, led Liberty Loan drives, advocated for prison reform, and was chair of the Pennsylvania Episcopal Diocesan Committee. The phrase “When you want something done, ask a busy person” could have been written about her.

For the Sesquicentennial Exposition, Martin proposed building an exhibition consisting of reproductions of 21 noteworthy Colonial-era structures–a living history exhibit with costumed docents explaining each building’s role. High Street had been the name of Market Street during the Revolutionary War. These docents she organized were the Women’s Committee of 1926, which also provided costumed tour guides at Independence Hall. Colonial Revival architecture and furniture was still in fashion at the time. Philadelphia department stores, sensing a marketing opportunity, responded to Martin’s plea to help furnish the 21 Old High Street structures with Colonial-era reproductions. Strawbridge and Clothier took on the Jefferson House, Wanamaker’s dressed up the Indian Queen Hotel, Gimbel’s was responsible for the Loxley House, and Snellenburg’s decorated one of the brick residences. The other Old High Street buildings would include the Slate Roof House of William Penn, George Washington’s Philadelphia home when he resided here as president, the Old Town Hall, Benjamin Franklin’s printing shop, and a Quaker meeting house. With her idea, Mayor Kendrick now had an alternative that would satisfy both the historic celebration advocates and the Vare Brothers and their cronies. He then embarked on planning the rest of the event site with the City’s architect, John Molitor and his young assistant Louis Kahn. 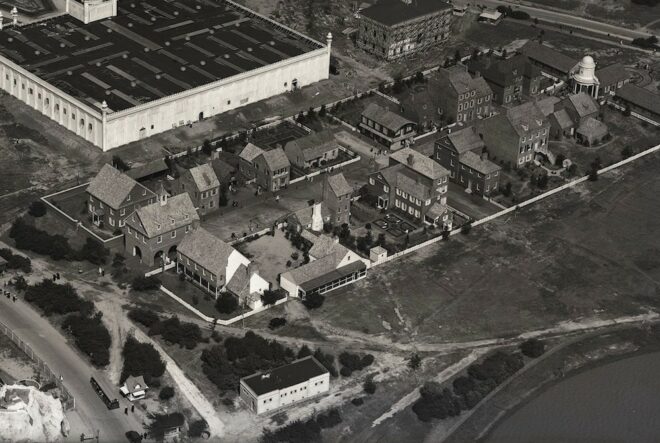 An aerial photograph from 1926 of the 21 buildings that made up the Old High Street exhibit. | Photo courtesy of Hagley Museum & Library

The Sesquicentennial Exposition is remembered as a spectacular failure, but not because of Martin’s exhibit, which was quite popular with visitors. Mayor Kendrick had his own special claim to fame. He had been the Imperial Potentate of North America in the Ancient Arabic Order of the Nobles of the Mystic Shrine, commonly known as the Shriners. As Imperial Potentate he had proposed that the Shriners establish a charity providing children with medical care, the Shriners Hospitals for Children, which insured his lasting popularity. When elected, Mayor Kendrick declined further Shriner duties, but maintained a close association with its leadership. He attended the Shriners’ 1925 annual national convention where he pitched its 1926 gathering to be held on the city’s fairgrounds.

Philadelphia hosted 200,000 Shriners during the Sesquicentennial Exposition’s opening weekend. However, the fair was not ready for opening and the grounds resembled a construction site with many exhibits either half finished or not even begun. Some that had been built did not yet have their displays installed. Exhibits continued to open as late as a month before closing, and a Sesquicentennial Exposition gift to America from the Italian government, the beautiful Fountain of the Sea Horses on the traffic circle near the Fairmount Water Works, did not arrive until after the event closed. Opening late is not unusual for a world’s fair. Chicago’s Columbian Exposition of 1893, celebrating four centuries since the arrival of Christopher Columbus, opened in 1893. The St. Louis World’s Fair, celebrating the 1803 Louisiana Purchase, opened in 1904. The Sesquicentennial Exposition’s finance director, Albert M. Greenfield, urged postponing the opening of the fair in Philadelphia, but Mayor Kendrick had promised the Shriners a grand opening in May 1926, come hell or high water, which, ironically was a real possibility in a recently filled and hastily compacted wetland. Shriners returned home with the message: the Sesquicentennial Exposition is not worth the trip. 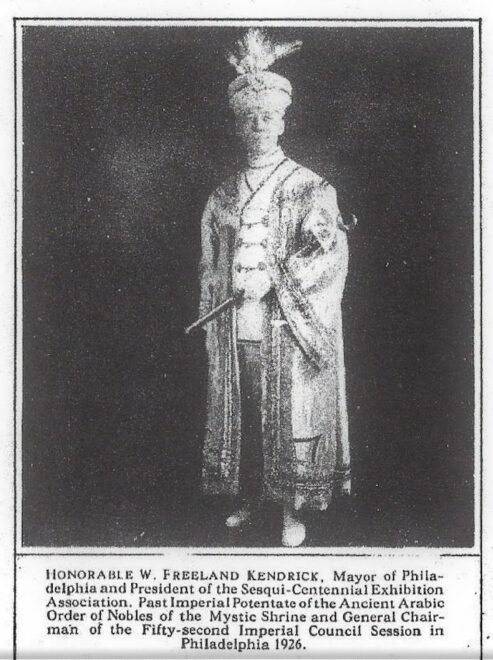 The event attracted only a small fraction of expected visitors and closed with a $4 million deficit, which the City had to absorb, transferring funds earmarked for other projects. Among other unrealized plans, this is the reason why today there is no Roxborough Subway/El.

With the Sesquicentennial Exposition’s November closure, Martin needed a new project and she proposed that the Women’s Committee of 1926 take on renovation of Strawberry Mansion in East Fairmount Park. The home was built in 1798 by Judge William Lewis, a friend of George Washington and Benjamin Franklin. She intended that this mansion, one of the largest in the park, become a repository for the furniture and antiques donated to her Old Home Week exhibit.  The Women’s Committee also organized efforts to restore and open Mount Pleasant Mansion. 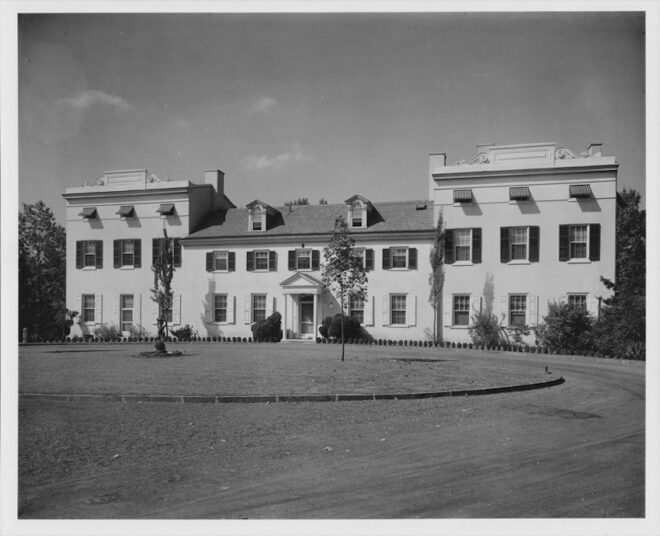 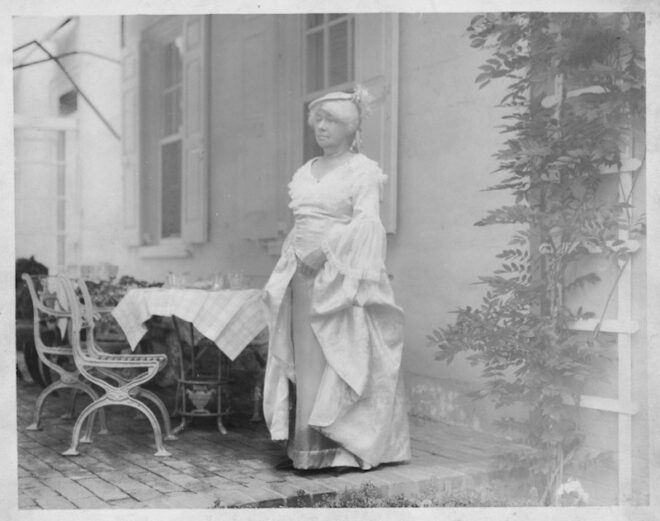 In June 1927, Frances Anne Wister wrote to Martin suggesting that the Women’s Committee consider adopting the cause of preserving private, historic houses that were fast disappearing from around the Independence Hall neighborhood. Wister cited the example of the New England Historical Society’s restoration work in Boston and noted that, from a purely commercial view, every building that Philadelphia had to show from the late 18th century would be an attraction for visitors, as Martin had proven with her successful Sesquicentennial Exposition exhibit. Martin responded that she focused her energies on restoring homes in Fairmount Park in order to avoid acquisition costs and suggested that Wister form a subcommittee to explore options and fundraising potential.

Wister, a leading figure in the history of Philadelphia’s historic preservation movement, would go on to form the Philadelphia Society for the Preservation of Landmarks. In 1931, the organization took on its first project, rescuing the home of Revolutionary War-era patriot Samuel Powel. The house at 244 S. 3rd Street is considered to be one of the finest examples of Georgian architecture in the city. Before it was preserved, Powel House had been targeted for demolition to make way for a parking lot. the Philadelphia Society for the Preservation of Landmarks rescued three other Colonial-era homes: the Physick House near Independence Hall, Grumblethorpe in Germantown, and Waynesborough in Chester County. 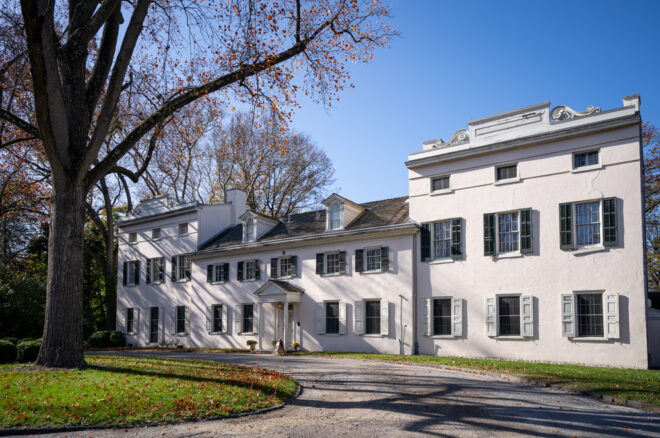 Martin’s long career of public service was recognized upon her death in 1932 with the flags of Philadelphia flown at half staff. Emergency Aid of Pennsylvania recognized her with an elegant tribute with the following statement.“Her boundless energy and her capacity for accomplishment were united in her character. She brought into the lives of those about her and who were working with her a vision, which can never be forgotten and she was to each of her associates a generous and dedicated friend.”

The Committee of 1926 still maintains and runs Strawberry Mansion, the House of Hospitality, although “Women’s” has been dropped from the organization’s title. The Committee honors Elizabeth Price Martin with its Azalea Walk named in her honor.