Powelton Village Historic District and Others Added to the Local Register 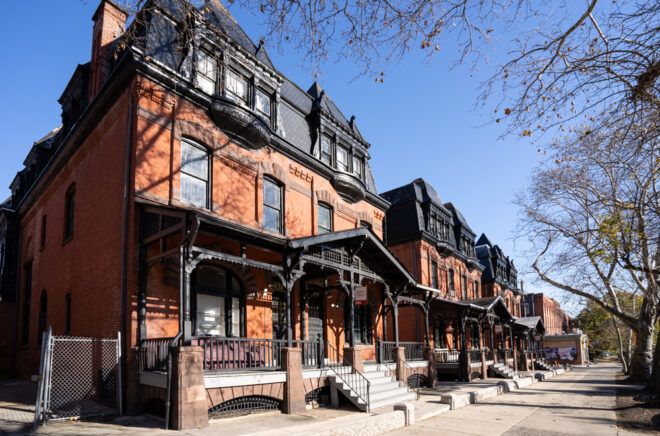 During a long and contentious November meeting, the Philadelphia Historical Commission added a large historic district in Powelton Village, two Germantown Avenue storefronts, a Queen Ann home in Mount Airy, and a former hospital building in Mill Creek to the Philadelphia Register of Historic Places.

Powelton Village Historic District is the largest historic district added to the Philadelphia Register of Historic Places in at least 20 years. It was nominated by the Powelton Civic Association (PCA). The historic district includes 817 buildings, most of which are 19th century housing, including grand, freestanding homes, middle class twins, and modest rowhouses. Powelton Village has been on the National Historic Register since the 1970s, but it has not benefited from local legal protections.

The nomination argues that Powelton Village typifies the historic arc of real estate development in West Philadelphia, from large quasi-rural estates owned by wealthy elites in the late 1800s to a suburban enclave for the city’s growing middle class in the 20th century. It also argues that the collection of Italianate, Second Empire, Queen Ann, and other revival style homes are remarkably intact and form a cohesive neighborhood character. 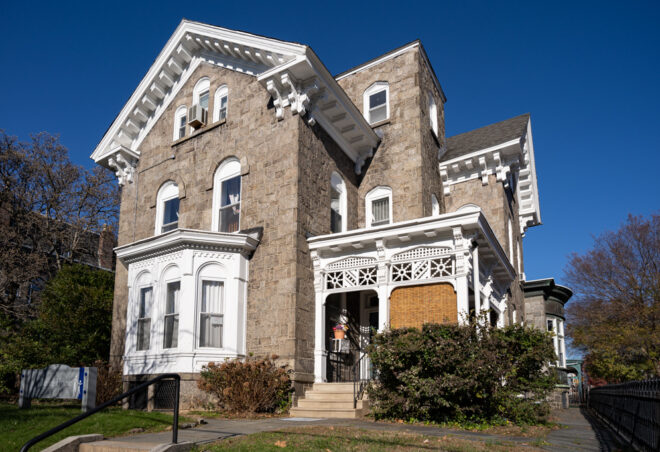 This single family home at 34th and Baring Street was built in the late 1800s. It is now occupied by Baring House Crisis Nursery, a short term shelter that provides care for children at risk of harm or neglect. | Photo: Michael Bixler

Mark Brack spoke on behalf of the PCA, stating “The past decade has brought demolition and insensitive development that were degrading the quality of Powelton.” Brack described the PCA’s process of deciding to pursue a nomination, holding several public meetings debates, and engagement. A final public vote to nominate the district tallied 114 to 4 in favor of designation.

Several homeowners spoke in support of the nomination, with only one home owner, Terrance Alter, speaking against designation. Alter, whose family has lived in Powelton Village for four generations, requested that his particular block, the 3800 block of Spring Garden Street, be excluded due to “cultural difference.” Alter stated that he felt the nomination was “cherry picking history” as it had “no mention of Black activism.”

The public comment was overwhelmingly supportive, with some stating their hope that this historic district could serve as a model for more preservation in West Philadelphia. Powelton Village was added to the local register by unanimous consent. 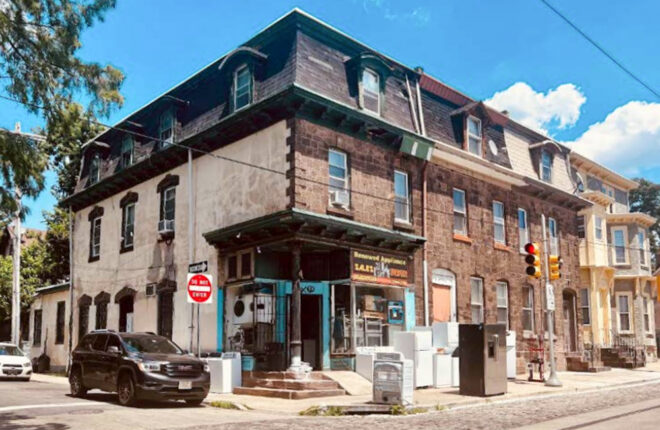 The Joseph P. Bolton Store and Dwelling at 4841 Germantown Avenue, nominated by SoLo Germantown Civic Association RSO, was added to the Philadelphia Register after a thorny, hours-long debate. The building, constructed by carpenter Job Kirby in 1870, is a 3-story mixed use home and storefront with a mansard roof underscored by a decorative modillion cornice. The building has many of the key characteristics of Second Empire architectural style, which came to define development in the Germantown area in the second half of the Victorian era. The property lies just outside the boundary of the Fisher’s Lane historic district, which was added to the National Register in 1980.

The owners of 4841 Germantown Avenue opposed the nomination and were represented by Dilworth Paxton attorney Neil Sklaroff and architectural historian George Thomas. The bulk of their opposition came down to the separation of the single corner building from the two interconnected buildings to its right, which created a small row, as well as the timing of the nomination.

The owner of the building received a zoning permit for the corner parcel on June 29. The drawings for a proposed building show a four-story multi-family structure, but no demolition or building permits had yet been granted. The owners were sent a notice on July 6 that the building had been nominated. Sklaroff and Thomas argued that the nomination was authored to halt the development, was hastily written, “full of inaccuracies,” and incomplete without the acknowledgment of the full row of the three buildings. 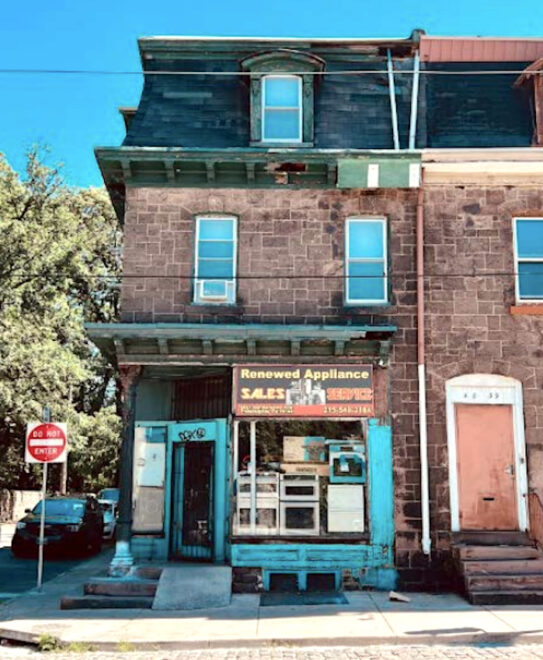 4841 Germantown Avenue, pictured here, is part of a row of attached buildings from the same era. | Photo: Oscar Beisert

SoLo Germantown Civic Association RSO and architectural historian Oscar Beisert, author of the nomination, explained that they have been working systematically on Germantown Avenue to nominate worthy structures and protect the commercial corridor. The group claimed that this specific building was bumped up on their list and they had been planning to nominate the full row as time and resources allow.

The Historical Commission received over 40 letters in support of designation. 23 people spoke in support of the nomination during the meeting. One attendee, Mason Carter, said, “While the developers feel blindsided by the nomination, the community feels blindsided by the development proposal.” Anna Doley gave a tearful testimony, stating, “I didn’t know what a mansard was, I didn’t know what Second Empire was, but I knew it was special and beautiful.”

Jeffery Cohen, a professor of architectural history and a member of the Historical Commission’s Committee on Historic Designation, said “We have to deal with nominations that are not perfect. We have to fill in the blanks a little.” Ultimately, in a vote of 8-2, 4841 Germantown Avenue was added to the local register. 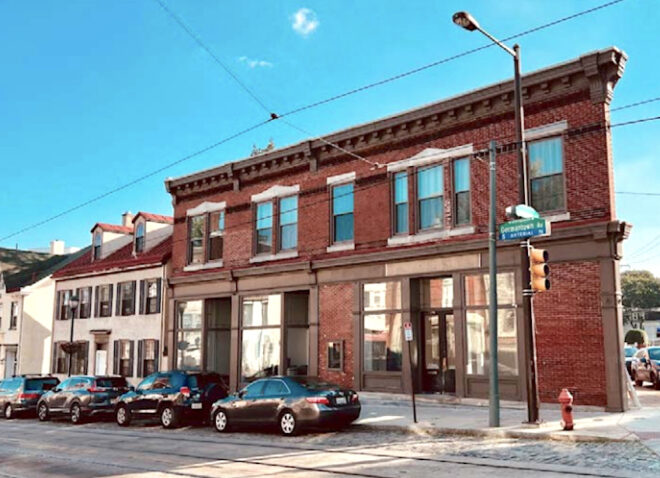 J.F. Rausenberger’s Bee Hive Meat Market at 6376-80 Germantown Avenue was nominated by Beisert with the support of the building’s owner. Built by Thomas W. Wright & Sons in 1889, the two-story brick building fills a triangular corner parcel at the intersection of West Johnson Street and Germantown Avenue. The building, which is itself triangular, is described in the nomination as an “eclectic amalgamation of stylistic elements that speak to the late 19th century,” most notably the High Victorian Gothic and Queen Anne Revival styles.

An old advertisement for J.F. Rausenberger’s Bee Hive Meat Market from the January 1, 1891 edition of The Germantown Guide. | Image courtesy of The Keeping Society of Philadelphia

The site was originally developed by John F. Rausenberger, an important Germantown resident who was a member of the Common Council of the City of Philadelphia. Rausenberger’s commercial building was an important part of the transformation of Germantown Avenue from the Main Street of a hamlet to a commercial district of a dense, residential suburb. An old advertisement for the meat market printed in a local paper shows a buzzing bee hive inscribed with “Nothing without labor.”

Doley spoke again during the public comment section, stating “This time I am smiling, not crying.” She explained that her home immediately abuts the building. 6376-80 Germantown Avenue was added to the Philadelphia Register by unanimous consent. 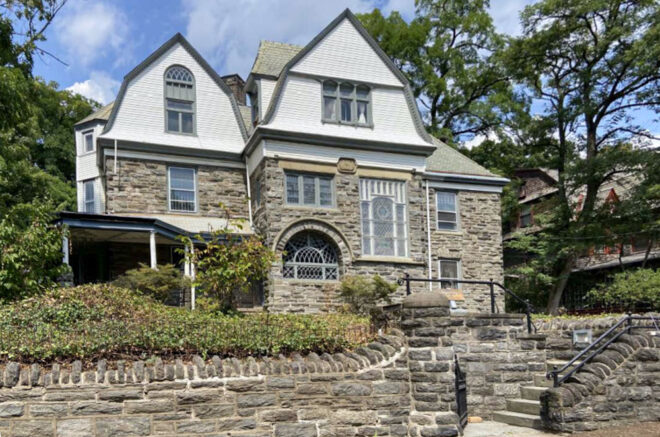 The Jesse A. Tilge House on Upsal Street in Mount Airy. | Photo courtesy of the Philadelphia Historical Commission

The Jesse A. Tilge House, a stately Queen Ann residence at 221 W. Upsal Street in Mount Airy, was nominated by the staff of the Historical Commission. The three-story building was built in 1887  and is made partially of Wissahickon schist. The home was designed by influential Philadelphia architect George T. Pearson, who was primarily a residential architect that is credited with the design of roughly 300 homes during his first seven years of practice. He also designed extensively for John B. Stetson, the world-famous Philadelphia hat manufacturer. A Germantown resident, Pearson designed many Queen Ann homes in his neighborhood. During the public comment period, Jim Duffin, historian and senior archivist at the University of Pennsylvania, noted that several other buildings on the street had been designed by Pearson as well. The nomination states that, “Pearson (1847-1920) was designing a more original, eclectic, even idiosyncratic collection of Queen Anne houses and commercial buildings [than other architects at the time].” After a change in the proposed boundary line, the building was added to the Philadelphia Register by unanimous consent. 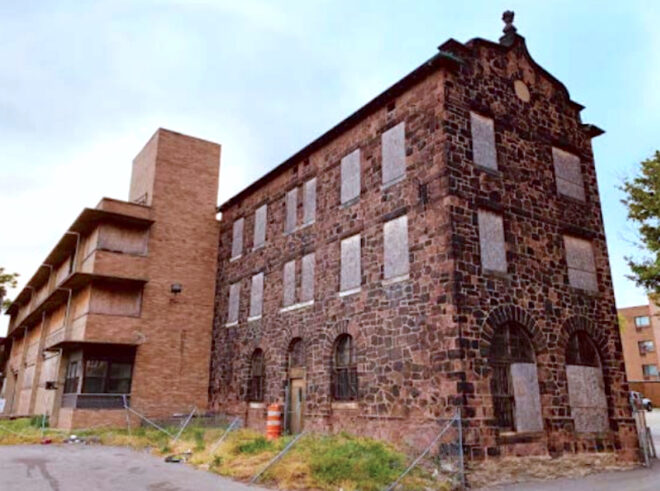 The former infirmary and modern addition of the Home for the Aged and Infirm Colored Person in Mill Creek. | Photo: Oscar Beisert

The infirmary of the Home for the Aged and Infirm Colored Person (HAICP) at 4501 Poplar Street, also known as the Stephen Smith Home, was nominated by University City Historical Society. The building is on the corner of Girard and Belmont Avenues in Mill Creek.

Designed by Edwin F. Bertolet in 1901, the three-story stone building is anchored visually by two arched openings marking the entrance. In 1961, a brick addition was built. Designed by Bellante and Clausse, the midcentury modern building has screened windows that run as horizontal ribbons along the length of the structure.

Beisert, who authored the nomination, writes that the HAICP “Was the earliest in the United States founded for the residential care of elderly African Americans. It was established at the end of the Civil War by Stephen Smith, a prominent Black lumber merchant, abolitionist, Underground Railroad conductor, and philanthropist. HAICP was an integral component of the growing, although thoroughly insufficient, effort to create a more equitable society for both free-born and formerly enslaved African American Philadelphians.” The nomination also underscores that this was not a purely charitable endeavor meant to house the needy, but also a project meant to provide dignity, meaning, and high quality health care to a community often denied those things.

Historical Commission staff noted that the buildings were in poor condition, slated for demolition, and had also been part of an unrelated nomination in 2015, which had been rejected. 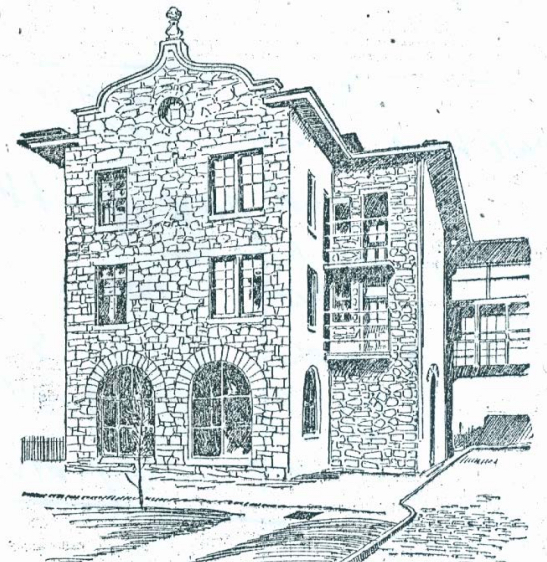 A 1901 sketch of the old infirmary from Jane Campbell Scrapbooks. | Image courtesy of The Keeping Society of Philadelphia and University City Historical Society

George Poulin of the University City Historical Society opened the comment period by explaining that this nomination was the result of a “community-lead initiative to preserve important African American sites in West Philadelphia, shockingly few of which are protected.”

He went on to say that, while the nominated buildings represent only a small portion of the original campus, which was demolished in 2009, we cannot go back in time and protect them so it is necessary to protect what is still standing.

Architectural historian Thomas spoke in opposition to the nomination on behalf of the site’s owners. He argued that the poor condition of the buildings would not allow for the repurposing or renovation of the site and that the only option was demolition.

Ultimately in a 6-2 vote, the site, excluding the rear portion, was added to the Philadelphia register, ending November’s long and debate-filled meeting.