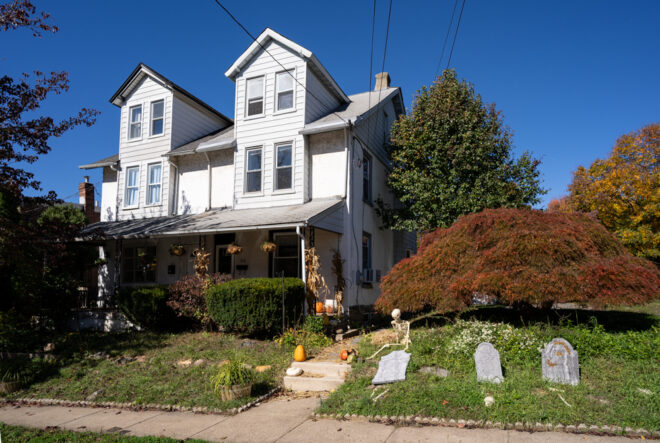 A twin within the Gates Street Historic District in Roxborough. | Photo: Michael Bixler

During October’s meeting of the Philadelphia Historical Commission a Catholic high school was added to the local register of historic places after heavy debate, along with four other ecclesiastical sites. A small historic district in Roxborough and a former saloon and brewery in Fairmount were also given legal protections.

Five of the six nominations up for consideration were written and submitted by Celeste Morello. For readers unfamiliar with the process of historic designation in Philadelphia, anyone can nominate a building, interior, or site. However, the research and paperwork involved is arduous, leading most to be authored by trained historic preservation specialists, academics, and architects. Sometimes community groups or other stakeholders will pay an expert to write a nomination on its behalf, but Morello has never been paid for her work. By her own estimation, Morello has personally submitted around 50 nominations that have been reviewed and voted on by the Historical Commission. She has submitted an additional 43 nomination that are awaiting review. All nominations submitted by Morello have been written on a typewriter and submitted on paper. Morello, who is a practicing Catholic, has a distinct interest in Catholic churches and Catholic-owned buildings in the city, although she occasionally submits nominations for other types of historic landmarks like the 1936 New Deal-era mural inside Southwark Station post office. 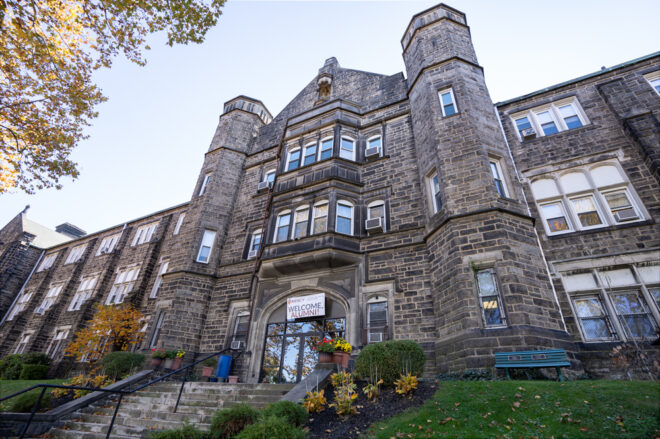 The Catholic Home for Destitute Children at 2901 W Allegheny Avenue, known today as Mercy Technical High School, is a T-shaped stone building located in the Swampoodle section of North Philadelphia. The orphanage, founded in 1863, was originally restricted to the female children of Civil War veterans. Residency was eventually opened up to any female child recommended by a Catholic clergy member. The organization was housed at 1720 Race Street before 1912, but was purchased by the City to make way for the Benjamin Franklin Parkway.

The Tudor Gothic-style building was designed by celebrated ecclesiastic architect Edwin Forrest Durang, who worked almost exclusively for the Archdiocese of Philadelphia. The Catholic Home for Destitute Children was Durang’s first institutional commission.

Morello wrote and underscored during her comment period at the meeting that the home is a strong example of the breadth of Catholic social services that once existed in Philadelphia. It operated parallel to the City’s social services, both to improve the lives of Catholics and also to maintain an “unassimilated” Catholic cultural identity. 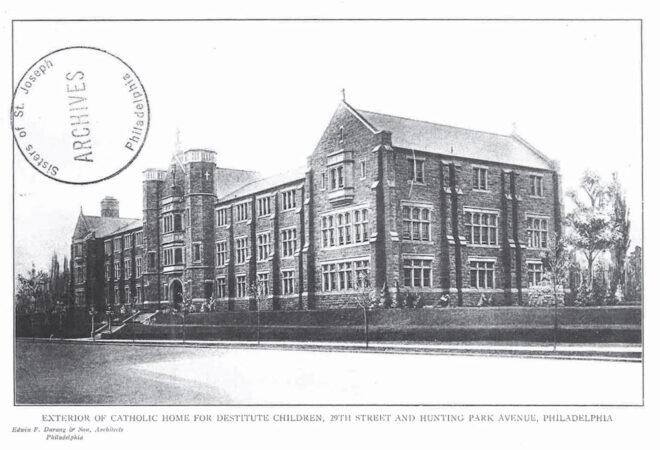 A undated photograph of the Catholic Home for Destitute Children shortly after its completion. | Image courtesy of Celeste Morello via the Sisters of Saint Joseph

The building is currently home to Mercy Technical High School (Mercy Tech), operated by the Sisters of Saint Joseph, which oppose historic designation of the school. Mercy Tech is hoping to undergo renovations, which it estimates will cost around $15 million. Representatives stated that the designation would hamper the school’s fundraising efforts as well as its ability to modernize the building. During the meeting, opposition argued that the nomination was “unnecessary,” “inadequate,” and it “buckled under its own weight.” George Thomas, a local architectural historian who, in recent years, is often hired by lawyers of building owners looking to fight a historic designation, was part of the Mercy Tech team. Thomas referred to Morello’s nomination as “grossly inadequate.”

Public comment was largely in support of the nomination. In response to Thomas’ remark, Paul Steinke, executive director of the Preservation Alliance for Greater Philadelphia, noted that “any citizen can create a nomination” and “we cannot ask for a “Harvard-level thesis.”

After a long debate period, the Historical Commission added the main wing facing Hunting Park Avenue to the local register and excluded the back portion of the building’s T-shape, allowing for the ease of ongoing renovations. 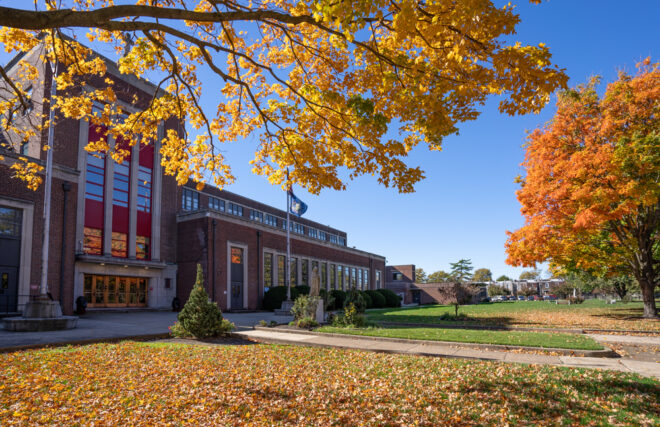 The Little Flower High School for Girls at 1001 W. Luzerne Street is an imposing brick building articulated with limestone trim. Built in 1938, the Streamline Moderne design was a departure from what the Catholic Church was known for in Philadelphia, and its construction was well publicized. The school was designed by Henry D. Dagit & Sons, a firm which regularly sought and received contracts from the Catholic Church and was the main alternative to Durang and his associates.

The school was built in reverence to and named after Marie Françoise-Thérèse Martin, a Carmelite nun who died of tuberculosis at 24. Saint Thérèse of Lisieux, known as “The Little Flower,” is one of the most popular saints in the modern history of the Catholic Church, mostly due to her clear writing on love and the Holy Trinity. Cardinal Dennis Joseph Dougherty, the Archbishop of Philadelphia at the time, was a devoted follower of her work and even attended her canonization in 1925. He commissioned the school in celebration of her sainthood and informed the living members of the Martin family of its existence. The school was added to the local register by the Historical Commission, despite opposition from the Archdiocese of Philadelphia, by unanimous consent. 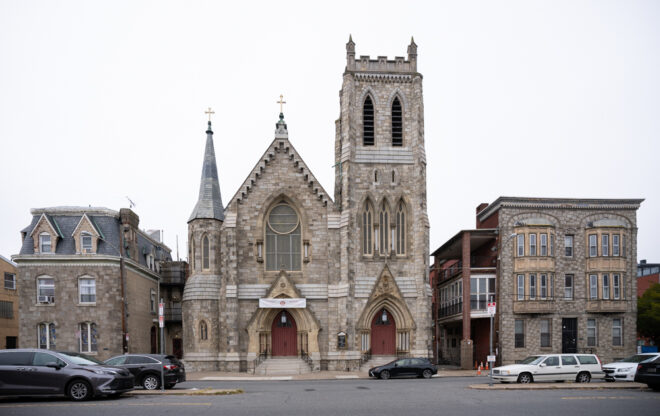 A row of three freestanding Picturesque Eclectic style buildings–the church, convent and rectory–make up the Sacred Heart of Jesus Church at 1400, 1406-18, and 1420 S. 3rd Street. Morello, the nominator, wrote that the Picturesque Eclectic style “involves the gothic (generically), but deviates from the medieval conventions, for design that are irregular, asymmetrical, have variety, and intricacy of the forms.”

The church building was designed by Durang in 1872. The architect was inspired by the use of Picturesque Eclectic style by secular architects in Philadelphia, including Frank Furness, and began to transition the style into his own ecclesiastical designs. The church building, described in the nomination as “quirky” due to its asymmetrical facade, towers at different heights, and unique colored windows, is at the center of the small row. The Sacred Heart Convent, to the left of the main church building, was built in 1875 and designed by an architect yet to be identified. It has a playful mansard roof accompanied by dramatic, rounded cornices. Sacred Heart Rectory, to the right of the church, is a stately, rectilinear three-story building with charming Neoclassical detailing. The three buildings were added to the register by unanimous consent. 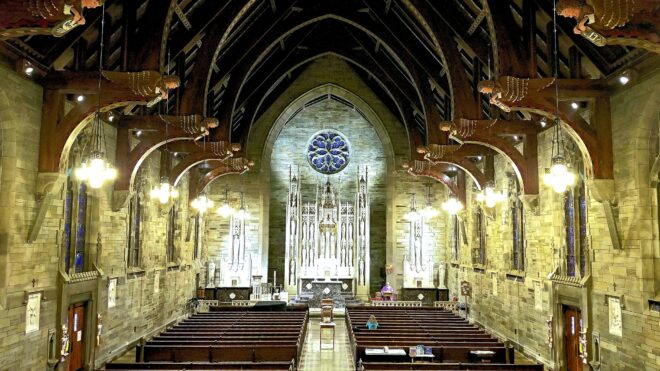 The Holy Cross Roman Catholic Church at 148-54 E. Mt. Airy Avenue is a Late Gothic Revival stone building constructed in 1928. The church is tall and rectilinear with arches and pediments. Morello stated in her nomination that “The church’s design represents the phase in the Archdiocesan ecclesiastical architecture from the early 20th century. By that time, the popularity of the traditional Roman Catholic styles (Romanesque, Gothic, Baroque) was declining. As the city expanded towards the suburban-like areas in the northern, northwestern and southwestern area, the English Gothic was preferred.”

Architectural historian Jim Duffin spoke in support of the nomination during the public comment period, expressing the importance of the church to the neighborhood and his family. The trio was added to the local register by a vote of unanimous consent. 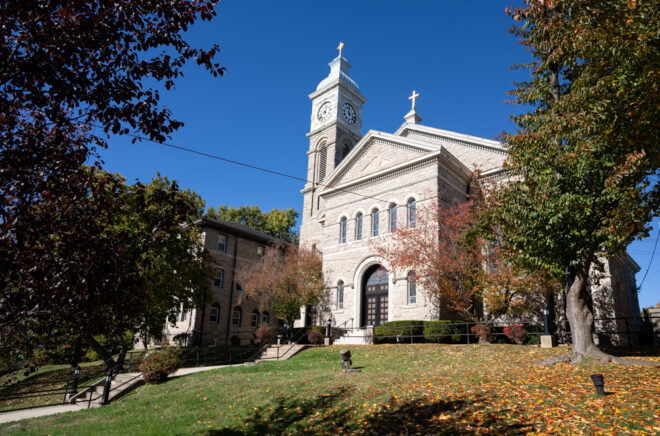 The Holy Family Church at 234 and 240 Hermitage Street is a majestic stone building in Manayunk. Its prominent towers sits atop a small hill. Built in 1897, the main church building, part of a four-building complex, is a rare, surviving example of the German Romanesque style in Philadelphia.

Three architects were involved in the design of the church complex: Patrick C. Keely, Thomas P. Lonsdale, and George I. Lovatt. Keely, who started the design of the project, but died before the project was completed, has been referred to as “the patriarch of United States Roman Catholic Church architecture.” The entire church complex was added to the Philadelphia register by unanimous consent. 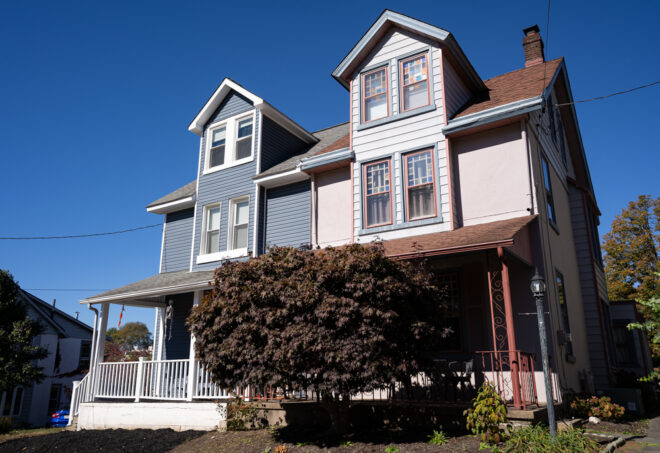 A twin within the Gates Street Historic District in Roxborough. | Photo: Michael Bixler

A small, one-block historic district in Roxborough was added to the local register despite Historical Commission staff recommending its denial. 24 properties along the 300 block of Gates Street were nominated by the Park Ridge Civic Association with the help of Oscar Beisert, founder of The Keeping Society of Philadelphia. The nomination for the Gates Street Historic District was submitted with the financial support of many neighbors on the block who pooled money to pay Beisert.

The nomination argues that the range of Italianate, Folk Victorian, Second Empire, Gothic Revival, and Colonial Revival two-and-three-story homes express the social, cultural, and economic history of the dense neighborhood. Beisert states in the nomination, “While none of the buildings qualify as high style in terms of aesthetics, the collection exemplifies the city’s diverse architectural typologies of buildings constructed for prosperous people of moderate means.”

In opposition to the nomination, the Historical Commission staff wrote that, “The type of argument for significance presented in the nomination could be made for almost every older residential block in Roxborough.”

Marlene Schleifer, a resident of the block who helped to organize the nomination effort, spoke during the comment period, saying, “The street really is special” as it is “not manner homes or mill worker homes,” but instead represents a prosperous, middle class housing form.

Schleifer also stressed the importance of protections for the block since, “So much is disappearing so quickly” in the neighborhood. Five other residents of Roxborough spoke in support of the nomination, which was ultimately added to the Philadelphia register by unanimous consent. 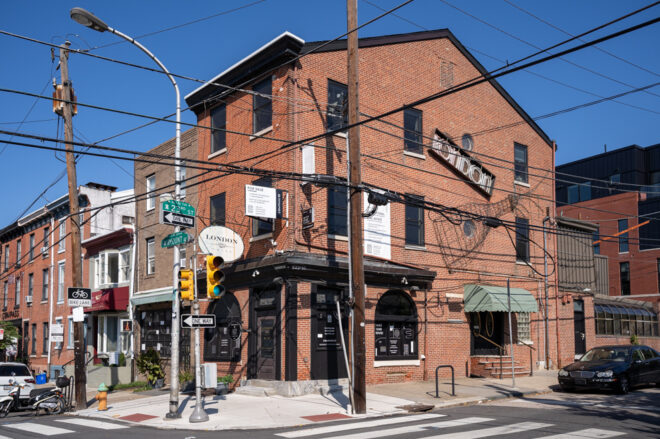 Rothacker-Orth Brewery and Lager Beer Saloon at 23rd Street and Fairmount Avenue was last home to London Grill. It was was built in 1845 and had continuously operated as a bar and restaurant for 174 years until 2019. | Photo: Michael Bixler

At September’s meeting, the Historical Commission delayed a vote on the former Rothacker-Orth Brewery and Lager Beer Saloon at 2301 Fairmount Avenue, most commonly known as London Grill, to give the new owners of the property more time to gather information. The owners, Fairmount LG Holdings LLC, who were in support of the nomination, asked for certain sections of the back wing of the building to be excluded, presumably to allow for an addition or further development.

The owners hired Nick Kraus of Heritage Consulting, which presented arguments at the last meeting about the boundaries of the original construction. Kraus again presented information about the lack of historical material on the rear wing and asked that it be excluded. Patrick Grossi, director of advocacy of the Preservation Alliance for Greater Philadelphia, authored the nomination. He spoke against Kraus’s findings and argued that nominations are typically submitted for the entire site, not just sections of a structure. Grossi said that it sets a dangerous precedent to “surgically divide” buildings. Ultimately, the Historical Commission voted in favor of adding the London Grill to the local register, excluding the solarium wing and a roofless section housing mechanical systems.