Peirce College: On the Move Since 1865 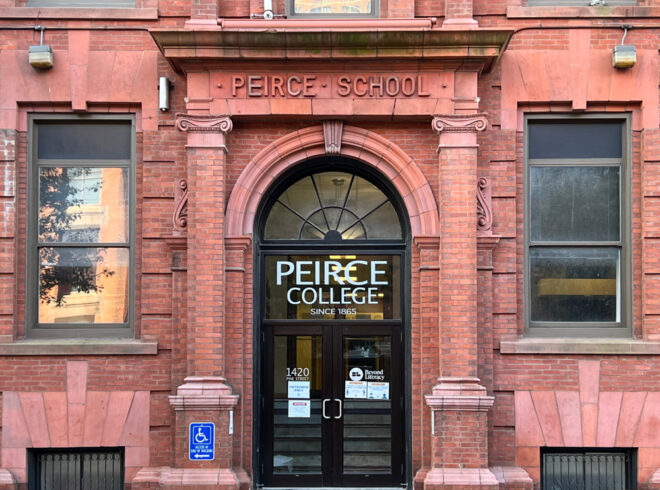 Peirce College purchased the former Delancey School at 1420 Pine Street in 1915 and eventually expanded into a block of adjacent rowhouses. The school plans to downsize in-person learning and move operations to the former Sun Oil Building on Walnut Street in Rittenhouse Square. | Photo: Michael Bixler

Peirce College recently announced that after 107 years it is moving the school’s main campus from 1420 Pine Street to the 19th floor of the former Sun Oil Building at 1608 Walnut Street, which was designed by Tilden, Register & Pepper and completed in 1930. Prompted by several factors, including a shift toward online learning accelerated by the pandemic, the move will be the fifth in the institution’s history. Peirce College has a storied past in Philadelphia, where its first classes were held just after the Civil War came to an end.

The school was founded by grammar school principal Thomas May Peirce in 1865 as the Union Business College. It was part of a nationwide effort to formalize business training with an emphasis on office workers, clerks, and managers entering the rapidly growing industrial and retail sectors in northeastern cities. The college held its first classes in September of 1865 inside Handel and Haydn Hall, located on the northeast corner of 8th and Spring Garden Streets. As the school grew and relocated several times over the next century, a member of the Peirce family would remain at the helm until the retirement of Thomas May Peirce III in 1981. 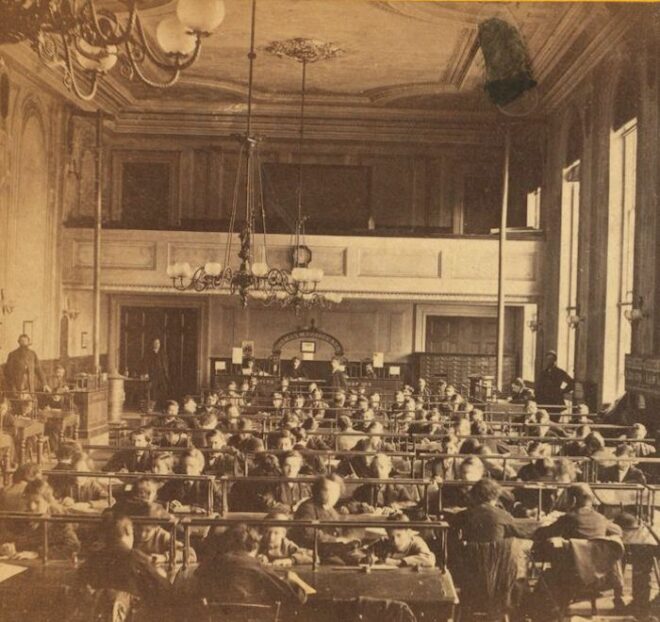 The early programs were co-educational from the school’s founding and reflected the gendered work expectations of the time. Penmanship and writing skills were an important component of business training in the 19th and early-to-mid-20th centuries, and Peirce’s programs were extensive. In some early advertising, the school is referred to as Union Business School and Writing Institute. Programs could be completed in less than a year, with students earning certificates to represent their training.

In 1869, the school moved into the Inman Building at 10th and Chestnut Streets, centering the institution in the Philadelphia business community. It would outgrow the space over the course of the next decade. When the Record Building, designed by Willis G. Hale, opened in 1882, the school leased space on three floors. It was during this period the school began using Peirce’s name as the Peirce School of Business. Beginning in 1881 with the Wharton School, traditional institutions began offering degreed business programs, but Peirce’s reputation as a business training school continued to grow with members of the Guggenheim family and others attending, often after graduating from four-year institutions. 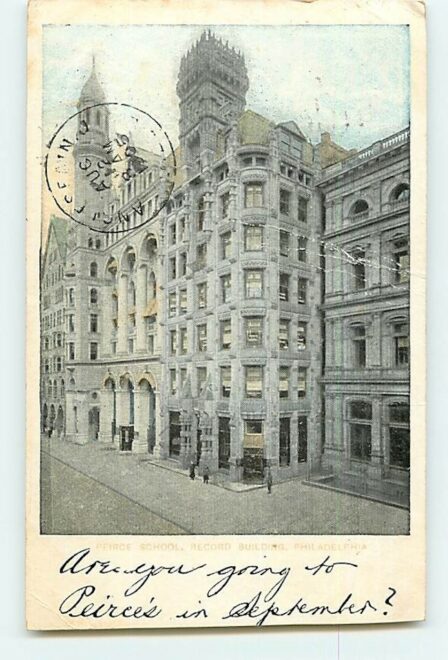 An old postcard showing the Record Building where the Peirce School of Business occupied three floors before moving to 1420 Pine Street in 1915. | Image courtesy of Peirce College Archives

By 1915, Peirce director Louis Moffit had successfully argued that the school needed a dedicated campus. When the Delancey School vacated 1420 Pine Street in its merger with the Episcopal Academy in Devon, Pennsylvania, Peirce purchased the building. Designed by architect George C. Mason Jr., the seven-story building featured a rooftop gymnasium where tennis champion Bill Tilden honed his skills early on as a Peirce student. Other amenities included a bowling alley and cooled water fountains. The exterior remains largely unaltered to this day. Peirce simply replaced the Episcopal Academy lettering with “Peirce School” at the Pine Street and Carlisle Street entrances. Like many buildings from the era, aside from the staircase, the interior has undergone several renovations over the last century which would make the 1915 building largely unrecognizable from the inside. The college would later purchase the adjoining rowhouses on Pine Street to 15th Street. These would first serve as administrative residences and student dorm spaces and later as office spaces and a tutoring center after the interiors were gutted and merged with the College Hall building at 1420 Pine Street. One of the merged homes, 1426 Pine Street, is notable as the birthplace of architect Frank Furness. Just across the street from the architect’s birthplace is the Furness Residence Hall at University of the Arts, which the architect designed in 1875 as an addition to the main building on Broad Street. The residences were originally part of the Pennsylvania School for the Deaf campus, which moved to Mount Airy in 1892. 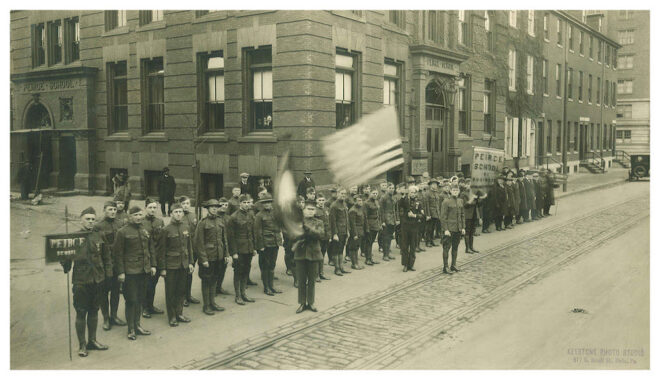 Peirce College students and alumni pose in front of 1420 Pine Street in 1917 prior to serving in World War I. | Photo courtesy of Peirce College Archive

In 1964, the Peirce School was granted nonprofit status and was renamed Peirce Junior College, offering two-year degrees in a range of disciplines. In 1998, the school would be renamed Peirce College when it began offering four-year degrees with a focus on professional programs geared towards adult learners. A year later, the building would reprise its role as a private boys school in M. Night Shyamalan’s movie The Sixth Sense, where the exterior served as St. Anthony’s Academy for Boys. 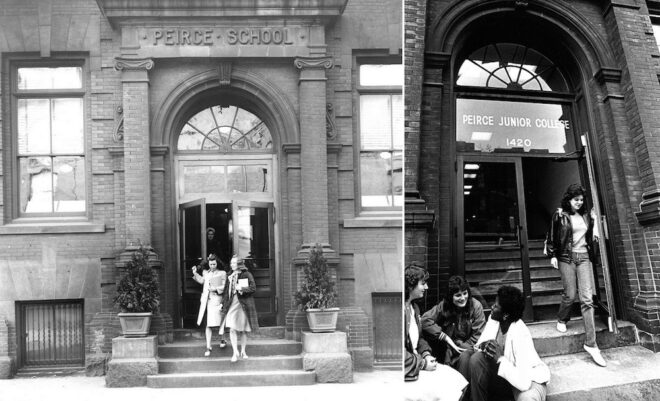 The announcement of the move by Peirce College did not include concrete plans for the Pine Street location, which was added to the Philadelphia Register of Historic Places in 1973. The city values the college complex, including the adjacent rowhouse facades along Pine Street, at just over $26 million. As a nonprofit educational institution, Peirce is exempt from property taxes on the site.

The move to Walnut Street brings Peirce full circle, returning it to a single-floor classroom institution, albeit a much larger one than in 1865, and one that is no longer restricted to traditional brick-and-mortar education.

Full Disclosure: Bart Everts was a librarian at Peirce College from 2012 until 2015 and taught classes there through 2018.