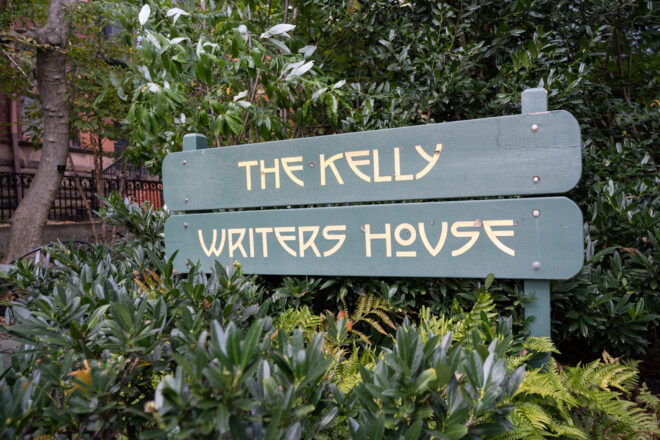 The Kelly Writers House, tucked away in a forest of lush landscaping along Locust Walk at the University of Pennsylvania, found its humble beginnings in 1994. The center opened its doors in 1997 and marks its 25th year this month. | Photo: Michael Bixler

The University of Pennsylvania is expanding at a ferocious rate. Shiny new buildings bearing the names of benefactors are popping up on the edges of its campus at a steady clip. In the midst of all this growth, a small, but powerful program that is tucked away in a Victorian cottage is marking a milestone anniversary. This weekend The Kelly Writers House (KWH) will celebrate 25 years during Penn’s homecoming weekend.

The program hosts around 130 events each year, including poetry readings, film screenings, seminars, lectures, workshops, art exhibitions, and musical performances. “Major writers come to the itty bitty writers house,” said Al Filreis, professor of English and KWH faculty director. He credits the success of the program to the intimate space. “At standing room only, we can fit about 120 people.” Filreis said the program would never consider moving on to a bigger venue. 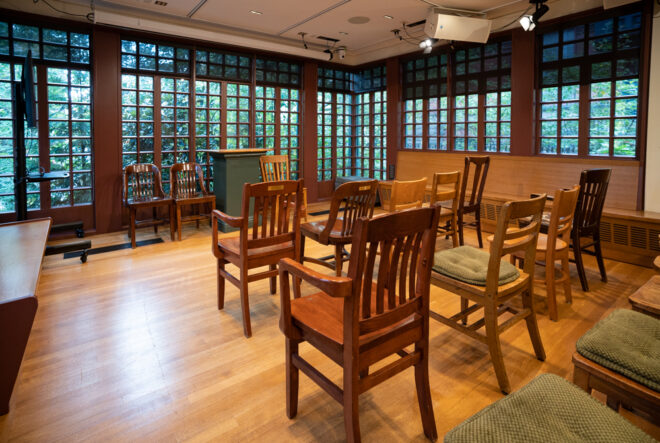 The Kelly Writers House, one of Philadelphia’s most active literary hubs, hosts around 130 events each year. Much of the center’s public programming is held in the house’s former parlor, now called the Arts Cafe. | Photo: Michael Bixler

In addition to in-person events, the KWH also fosters projects such as student publications, web magazines, radio broadcasts, and online book groups. In between its busy schedule, numerous students, faculty, and area residents use the KWH each week to work, write, and collaborate in its various seminar rooms and lounges, especially the Arts Cafe, the house’s original parlor.

The beginnings of the KWH date back to 1994. Penn had just named a new president, Judith Rodin, and a new provost, Stanley Chodorow. “The president and provost were looking to create ‘hubs’ on campus as an alternative to fraternities and clubs that would be more welcoming and inclusive,” explained Filreis. “They were interested in a 21st century project for undergraduates to generate ideas about programs that could be student-centric and student-driven.” 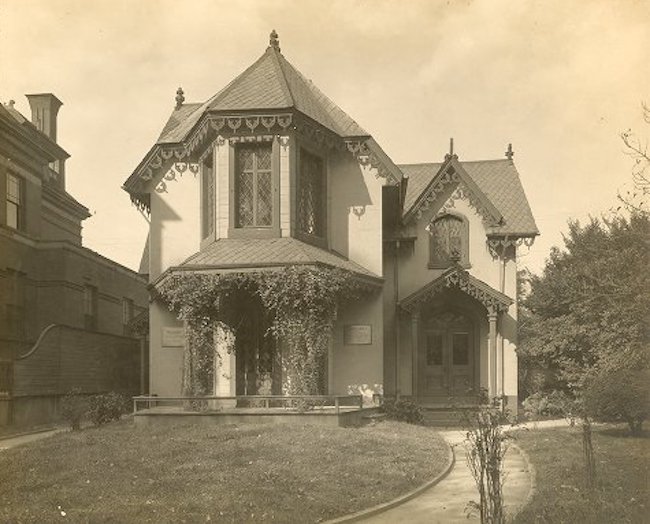 3805 Locust Street, pictured here in 1908, was built between 1851 and 1855 and designed by architect Samuel Sloan. The house was expanded in 1916 with designs by Furness, Evans & Co. | Image courtesy of University Archives and Records, University of Pennsylvania

Located at 3805 Locust Walk, the building has had several lives over the last 167 years. It is one of the few surviving structures of the Hamilton Village neighborhood that was razed in the 1960s for Penn’s expansion and the creation of its so-called “Superblock” of high rise and low rise dormitories.

The house was built between 1851 and 1855 as a speculative project by developer Samuel Aden Harrison along with its now heavily-altered twin at 3803 Locust Walk, today the home of Perry World House. As Philadelphia’s growth crossed the Schuylkill River, Harrison, along with fellow developer Nathaniel B. Browne, were active in acquiring and building in the suburban communities of Blockley and Hamilton Village. 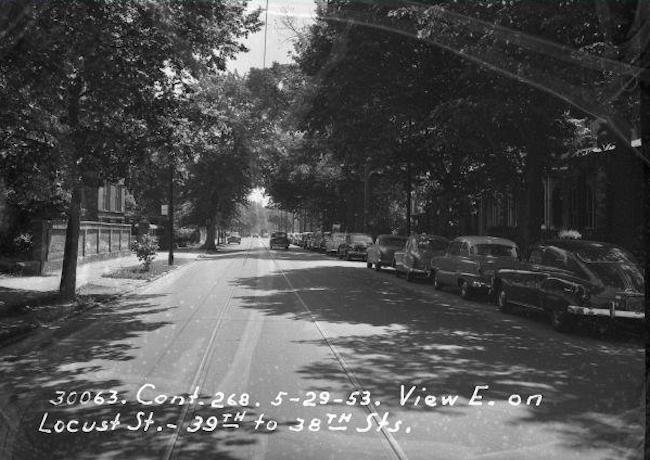 Locust Street between 39th and 38th Street in 1953 before Hamilton Village was largely demolished during Penn’s midcentury campus expansion. | Image courtesy of PhillyHistory.org

The two adjacent houses on Locust Walk were designed by Samuel Sloan. Some of the architect’s other surviving Philadelphia-area buildings include the Italianate twins on Woodland Terrace, the Delaware County Courthouse in Media, homes within the Drexel-Govett Historic District in University City, and the First Presbyterian Church of Kensington. Elsewhere in the country he designed numerous asylums and sanitariums including the central, domed section of the Babcock Building at the former South Carolina State Hospital. Sloan also was a prolific publisher of architecture books and periodicals, including The Architectural Review and the American Builder’s Journal.

After roughly half a century as a private residence, 3805 Locust Walk became the home of a chapter of the Acacia fraternity for several years in the early 20th century. The Masonic organization was founded at the University of Michigan in 1904. The Franklin chapter of Acacia, its 10th, was formed at Penn in 1906. Acacia purchased a nearby mansion and relocated there after its membership grew to about 100. The house next became the residence of the university chaplain. 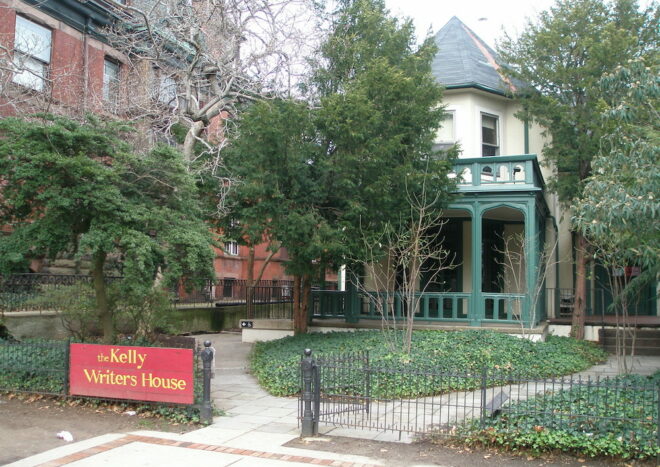 The Kelly Writers House in 2007. | Image courtesy of Bruce Anderson via Wikimedia Commons

Unlike several other of the Ivy League institutions, the University of Pennsylvania was intentionally founded without a relationship to a particular religious denomination, although a majority of the original trustees and its first head were Anglican. Over time several religious organizations such as the Newman Catholic Center and the predecessor to Hillel established chapters on the campus. However, it wasn’t until 1932 that Penn created the position of university chaplain and based it at the house at 3805 Locust Walk.

Reverend Stanley Ethan Johnson was the university’s fourth chaplain He retired in 1995, and the house was vacated. Around the same time, as Filreis and his group were laying plans for a writing program he received a fortuitous offer. “It got back to me that they had this building that had been the chaplain’s residence. But Stanley Johnson had retired,” he recalled. “They said, ‘The president wants to know what you would do if you had a house.’ I said I would create a writers house.” 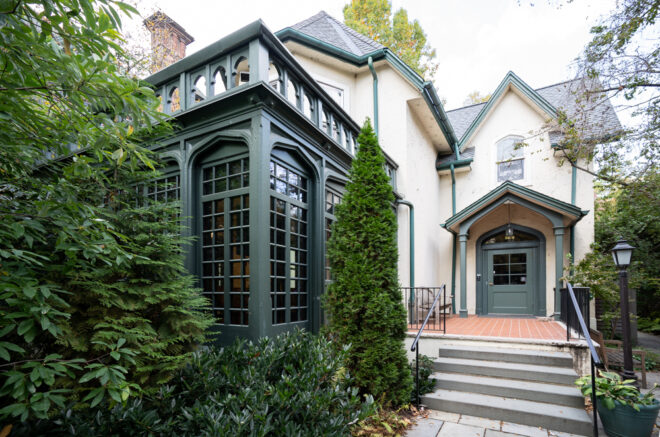 The Kelley Writers House today. The building underwent facilities and technology updates and a renovation of the former parlor that was completed in 2019. | Photo: Michael Bixler

Filreis and others discovered a few challenges lay ahead. “The front door didn’t lock. PECO had turned off the electricity because no one had paid the bill,” he laughed. “We basically squatted in the place until January of 1996. Then, I was asked to present my idea to the trustees. They liked it, so we began offering programs that spring.” A generous gift enabled renovations in 1997, in which architect Harris Steinberg modernized the building, while keeping the original character of the Victorian cottage.

25 years and thousands of programming events later, the KWH will mark the anniversary in its usual fashion: with conversation, food, and drink. A Friday night party on October 21 will be followed by an open house in the garden on Saturday afternoon and a reception in the evening. The latter event will feature 10 speakers who have been affiliated with the KWH in different ways over the years, including students, faculty, and writers who have been presenters there.