Editor’s Note: A version of this story was published in the Fall 2022 issue of Extant, a publication of the Preservation Alliance for Greater Philadelphia. 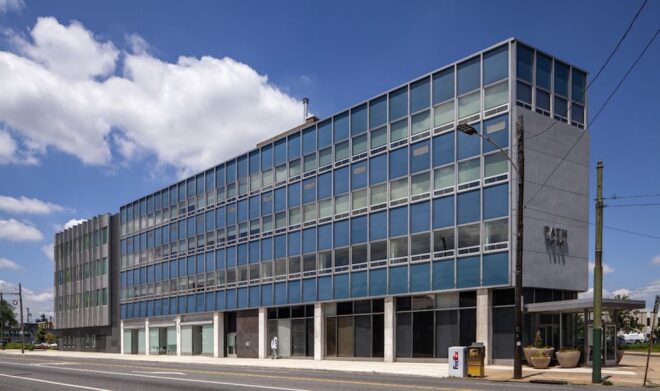 The rehabilitation of the PATH Center except for a clock that will be installed on the narrow face of the wedge-shaped building. | Photo: Peter Woodall

Architect Peter Bloomfield talks to Extant magazine about transforming a landmark modernist bank in Northeast Philadelphia into a welcoming campus for a mental health services center, honored with a 2022 Grand Jury Award in preservation achievement.

Extant Magazine (EM): What attracted you to this particular site?

Peter Bloomfield (PB): As a longtime advocate for the preservation of midcentury modern, I was struck by many components of the building when I first passed it. I admired its massing, use of materials, and I recognized its place in the development of Ed Bacon’s vision for this part of Philadelphia. Its location in the heart of “The Great Northeast” as a transportation hub was an added benefit, as was the available land that came along with it.

EM: What was the site’s original use?

PB: First Federal Bank (originally First Federal Savings and Loan) was significant for funding most of the mortgages that spurred postwar growth in the Northeast. 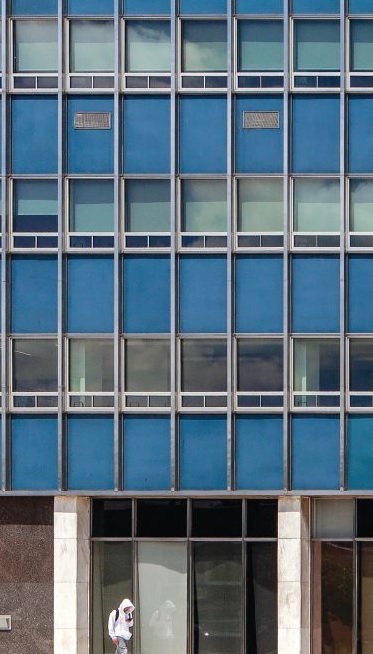 EM: What was most important to preserve?

PB: The bank was an icon in the neighborhood, so the exterior–blue metal panels and glass–led the way. Interestingly, the Philadelphia Planning Commission has this building listed as one of Philadelphia’s first curtainwall buildings. It is not. Rather, it is designed to look like a curtainwall structure.

EM: What was the client’s original vision? Did it change over time?

PB: In seeking a new site for a behavioral health center, PATH’s executive team initially considered acquiring vacant land for new construction. Their original vision included some very specific requirements, such as separate entrances and spaces for children and adults. The original vision changed, as we found few potential sites, and also considered public transportation opportunities and limitations. The bank property met all the criteria. And the ability to acquire marketable tax credits certainly helped persuade the client to take the preservation route.

EM: What was the biggest preservation challenge?

PB: Some of the window profiles, developed for single glazing, were much smaller than the current trends in insulated glass panel systems. 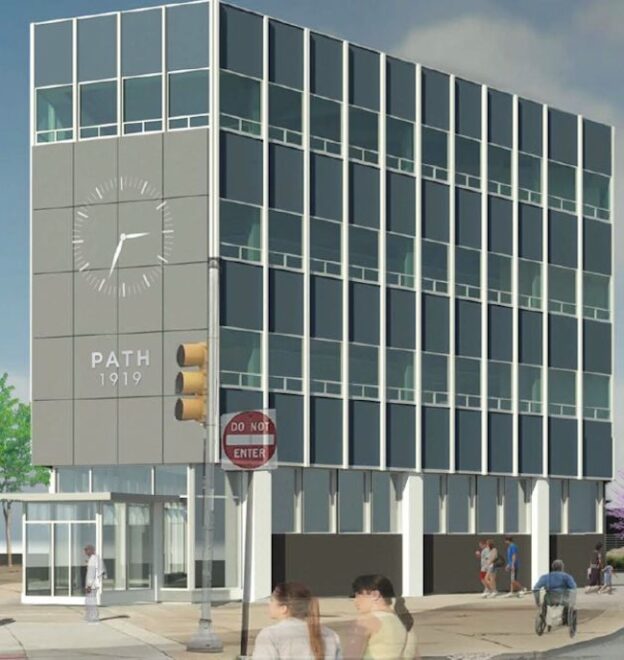 Architectural rendering showing what the building will look like once the clock is installed. | Rendering courtesy of Bloomfield Architects

EM: Did you look to any role model for inspiration or example?

PB: Throughout the process, the original design intent of the architects Thalheimer and Weitz motivated and inspired us. We even decided to place an analog clock on the “nose” of the building, replacing a digital one, installed in the mid-’60s. Though not an original detail, the spare “retro” clock face pays homage to the bank’s sleek style.

EM: What was the project’s biggest surprise (good or bad)?

PB: One of the project’s biggest surprises was the excellent condition of the blue metal panel system. The panels were made in central Pennsylvania by the Caloric Stove Company. For me, another point of connection: my mother had a Caloric! This was long before standardized metal panel systems were readily available for the design community. 65 years later, those panels were in great condition with virtually no fading. 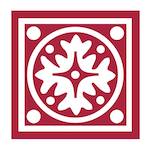 Extant Magazine is a publication of the Preservation Alliance for Greater Philadelphia.