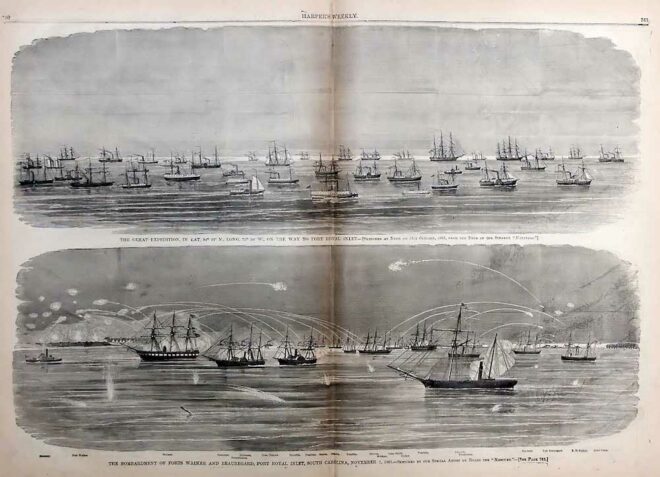 An illustration from the November 30, 1861 edition of Harper’s Weekly depicting the Union Army’s attack on Fort Walker and Fort Beauregard in South Carolina. | Image: Public Domain

On the morning of the engagement, Flag Officer Du Pont’s squadron began shelling Fort Beauregard and Fort Walker in a sweeping pattern that quickly disorientated the opposition which was not used to hitting swiftly moving targets. Unable to effectively defend and respond to the attack, Confederate soldiers continued firing for almost four hours before eventually running low on ammunition. The Confederacy’s casualties were 11 dead, 48 wounded, and four missing in the battle. The remainder of the soldiers retreated from both forts. The Union reported eight dead, 48 wounded, and four missing.

By that afternoon, General William Tecumseh Sherman arrived with 12,000 Union soldiers to garrison both forts and establish a Union presence in Confederate territory. Although Operation Anaconda was not entirely successful, the Union Army gained a foothold in the South.

The Union’s presence forced both residents and slave owners to abandon Beaufort, South Carolina and the surrounding areas, including the Sea Islands. This left large numbers of the former slave population on plantation lands in limbo. They were officially no longer slaves, but they were not yet United States citizens.

The Pennsylvania Freedmen’s Relief Association was founded in 1862 to assist in providing education and life skills to former slaves. | Image courtesy of WynningHistory.com

By early 1862, the Port Royal Experiment was initiated. The goal, according to Frederick Law Olmsted, then executive secretary of the United States Sanitary Commission, who proposed the bill, was to see that “it was necessary for the U.S. to train or educate them in a few simple, essential, and fundamental social duties of free men in civilized life.”

On February 6, 1862, General Order No. 9 was initiated to allow northern societies and volunteers to assist with plans to reform the South by providing life skills to the newly-freed slaves. This would prove to be a calling many northerners could not resist, especially in Philadelphia’s abolitionist climate.

The Pennsylvania Freedmen’s Relief Association was founded in 1862 as a response. Prior to the formation of The Union League, future prominent members became involved to both lead and appropriate funds for their programs. Stephen Colwell–an iron manufacturer operating in both Weymouth, New Jersey, and Conshohocken, Pennsylvania, director to the Reading and Pennsylvania Central Railroads, and trustee to the University of Pennsylvania–became a founding member of The Union League and one of the signees of its constitution. James Miller McKim, Presbyterian minister, founder of the Carlisle, Pennsylvania Anti-Slavery Society, became its secretary and lobbyist. After the formation of the league, other members became involved in the effort to provide education, food, and clothing to the Port Royal region. Southerners saw this as a carpetbagging plot to spread northern influence.

As the PA Freedmen’s Relief Association’s success grew, so did the number of Philadelphians who became involved. Born in Pittsburgh, Laura M. Towne moved to Philadelphia to attend the Female Medical College of Pennsylvania, later the Women’s Medical College of Pennsylvania, where she studied homeopathic medicine and became one of the first northerners to leave for the South. 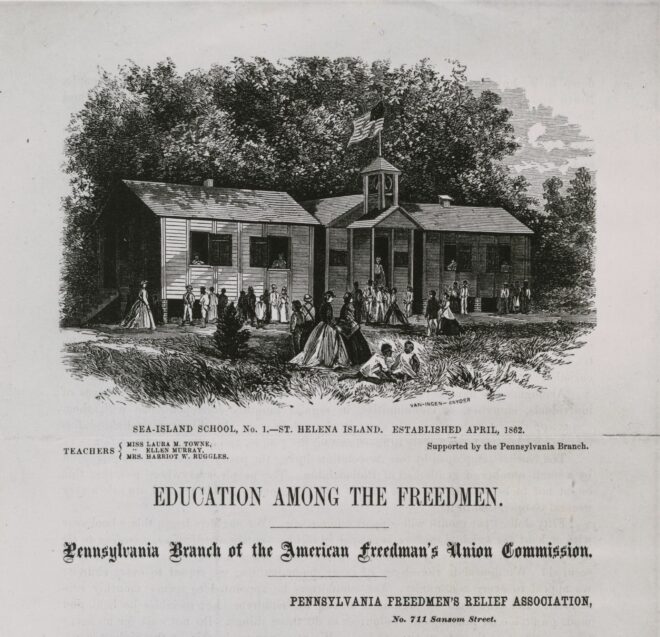 Arriving in South Carolina’s Low Country in April 1862, Towne used her medical training to diagnose and treat epidemics of yellow fever, cholera, and dysentery that was affecting the Gullah people of the Sea Islands. Later realizing that her true passion was teaching, she decided that what the residents of the region truly needed was an education.

Towne used the living room of the Oaks Plantation on St. Helena Island as a classroom. Northern donations allowed her to purchase land for the purpose of building a school.

In its first year, The Penn School, co-founded by Towne and Ellen Murray of Newport, Rhode Island and named after William Penn, was the first school created specifically for the education of Black Americans in a Confederate state. The school’s bell, which could be heard over five or six plantations, was inscribed with “Proclaim Liberty.” As time passed, donations allowed Towne to purchase adjacent land and develop a 50-acre campus, including churches, houses, and a hall.

Modeled on a northern curriculum, the school became known for its rigorous curriculum. This attracted people of various ages who could take advantage of its offerings as learning to read and write was no longer illegal for African Americans.

Charlotte Forten, granddaughter of Philadelphia sailmaker and abolitionist James Forten, also left the North to teach school in the Low Country. She describe her first day of teaching in her diary: “I never before saw children so eager to learn, although I had several years experience in New England schools. Coming to school is a constant delight and recreation to them. They come here as other children go to play. The older ones, during the summer, work in the fields from early morning until eleven or twelve o’clock, and then come into school, after their hard toil in the hot sun, as bright and as anxious to learn as ever.”

After the persistent lobbying of Reverend McKim, other aid groups were incorporated into the league. Honorary member General Oliver Otis Howard, founder of Howard University and later responsible for the massacre of the Nez Perce, would become its leader.

In 1866, The Philadelphia Freedmen’s Bank was established in the 7th Ward, bordered by Spruce and South Streets and extending from 7th Street to the Schuylkill River. Northern abolitionists advocated for instilling responsible financial habits among the newly emancipated Blacks during their transition to self-reliance. Managed by abolitionist and businessman William Whipper, the bank would hold accounts for Frederick Douglass, Robert Purvis, Stephen Smith, and Octavius V. Catto. The Philadelphia branch would be one of the most successful in the city. 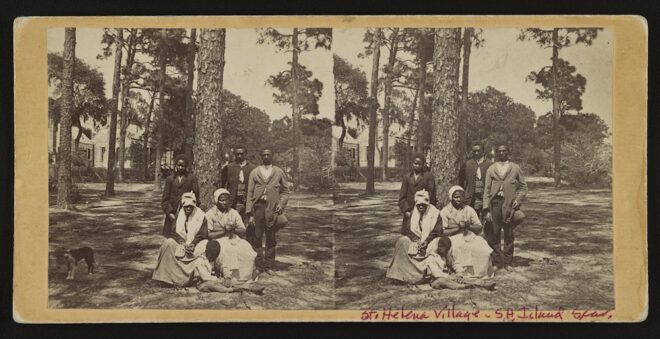 However well-intentioned, these efforts made during Reconstruction also sparked frustration, anger, and controversy among the people involved. In 1867, former Major General John W. Geary, a Republican, was elected as Pennsylvania’s governor by defeating Hiester Clymer, a supporter of Andrew Johnson’s Reconstruction Plan who ran on a white supremacy platform. The Union League was embroiled in allegations that Geary won because the PA Freedmen’s Bureau was part of a scheme to “win Negros over to the Republican party.” This caused President Johnson to view this news as a mark against the PA Freedmen’s Bureau.

Back in South Carolina, The Penn School annoyed white southerners and became a focus for President Johnson. Reneging on supporting the Freedmen’s program and its efforts, he cut short Reconstruction funding. Between 1865 and 1877, the charity of the Philadelphia Quakers sustained the schools, one of which later named its industrial shop after Francis Cope. 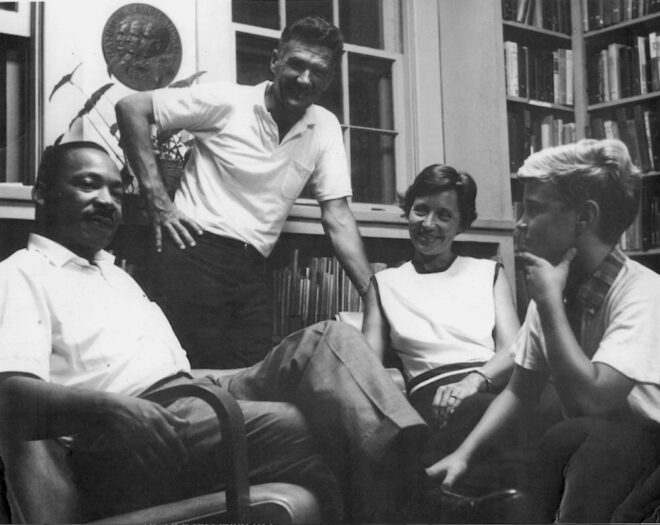 Dr. Martin Luther King Jr. at Penn Community Services (formerly named Penn School) with executive director Courtney P. Siceloff and his family. Dr. King visited the center five times between 1964 and 1967 and, along with strategizing his involvement in the civil rights movement, wrote the first draft of his famous “I Have a Dream” speech there. | Photo courtesy of The Atlanta Friends Meeting

Eventually, many northerners returned home after Reconstruction, yet Towne remained, operating the school until her passing in 1901. In that same year, the school was reorganized as the Penn Normal, Agricultural, and Industrial School. After the school was incorporated into the Beauford County School District in 1948, it became Penn Community Services, which served as a retreat for civil rights leaders, including Dr. Martin Luther King, Jr., due to its focus on social justice and assisting the local community as a health clinic. In 1974, the school became a National Historic Monument.

To date, Philadelphia does not have any monuments to Reconstruction. Fortunately, they exist as part of the Gullah Geechee Cultural Heritage Corridor in South Carolina, which was established 2006. Despite the many challenges the school has faced, it is still in operation as the Penn Center Museum. The Cope Industrial Shop is now the York W. Bailey Museum.