Ghost Signs of Philadelphia: Odds and Ends in Old City 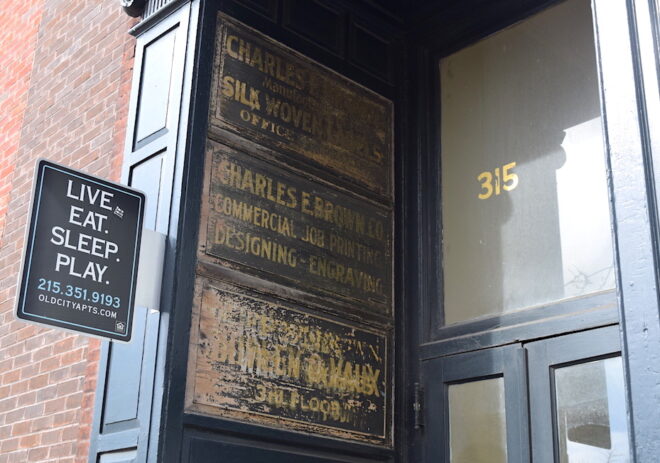 Old City is a mecca for those looking to find unique ghost signs. The 300 block of Vine Street features half a dozen signs–from the extremely faded to the faithfully repainted–transporting observant history buffs back to the heyday of hand-painted advertisements.

Charles E. Brown & Co. at 313-315 Vine Street knew how to make its name known. Many of the company’s signs still adorn the five-story brick factory today. Three of some of the best-preserved wooden ghost signs in Philadelphia can be found under the building’s protected entrance.

The printing and publishing business was founded around 1880 by New Jersey native Charles E. Brown. The company was known for printing gold monograms on hats and other clothing, as well as producing custom stationery, show cards, and announcements. It also manufactured millinery tips and crown linings for hats. The company found advertising success through the printing of an annual calendar. The August 1898 issue of The American Hatter described the company’s calendar as “a dandy,” with figures “big enough for a blind man to see, and lovers of art will know how to appreciate the work.” At the time, the calendar was considered a costly piece of advertising. However, it was an opportunity to show the capabilities of the company’s craft and the influence that print materials could have over its customers. 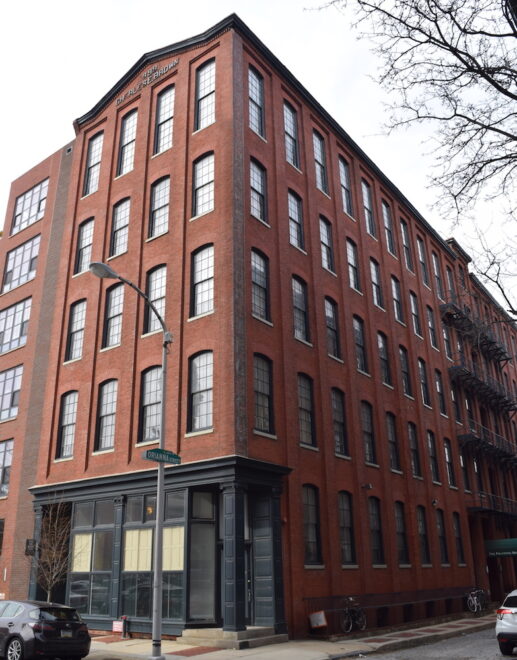 313-315 Vine Street. An old sign for Charles E. Brown & Co. can be seen below the center of the building’s cornice. | Photo: Jordan Keiffer.

On April 1, 1899, Charles E. Brown & Co. broke ground at 313-315 Vine Street to build a new factory to accommodate its rapidly growing business. The printer and publisher was previously located at 216 N. 3rd Street. An issue of Clothiers’ and Haberdashers’ Weekly from the period noted that the new building was “an elegant five-story structure, fronting on two streets, fitted with every modern appliance for fine printing. It contains one of the most complete and finely-equipped plants of its kind in the country. On the second floor is an elaborate suite of offices, finished in oak and handsomely decorated. Everything in the line of fine printing is done by Mr. Brown, and dealers should examine his work before placing orders elsewhere.” Brown was not exclusive to Philadelphia, as his company operated additional locations at 11-13 Waverly Place in New York City and 723 Penn Street in Reading, Pennsylvania.

Orders from all over the United States and Europe flooded in for Brown’s fine, embossed office stationery. In a 1902 advertisement, Brown claimed “We have been printing millinery printing so long that we know every little wrinkle about it, and we believe that we know it a trifle better than any of our competitors. No one else can supply you with such good work at such prices and so quickly as we can. We know how to go at it right and do it right.” Advertisements likened Brown to a modern Benjamin Franklin, harkening back to Philadelphia’s most famous printer and founding father. The ad claimed that Brown, like Franklin, was a savvy businessman who understood that “half the printed matter circulated now-a-days is not of such a character as to make a favorable impression.” Brown understood how his customers could get the most of their printed materials. 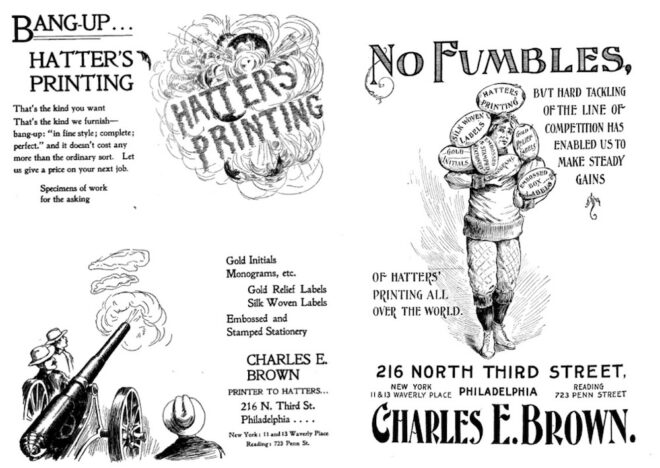 Signs painted on the outside of the Vine Street factory showed the company’s offerings. Most prominent are the vertical painted sign on the corner of the building at Vine and Orianna Streets which reads “CHARLES E. BROWN MFG CO.” and the block letters above the 5th story that spell out “1899 CHARLES E. BROWN.” Perhaps the most striking ghost signs are the three wooden, painted signs at the entrance of 315 Vine Street. From top to bottom, the first two read “CHARLES E. BROWN Manufacturers of SILK WOVEN LABELS OFFICE” and “CHARLES E. BROWN CO. COMMERCIAL JOB PRINTING, DESIGNING-ENGRAVING.” The bottom sign reveals layers of the building’s history after Brown went out of business. Remnants of his name can still be seen in the upper righthand corner, but at least two additional advertisements have been painted on top, including “SHIPLEY & VAUX,” a shoe manufacturing company that would later occupy part of the building. 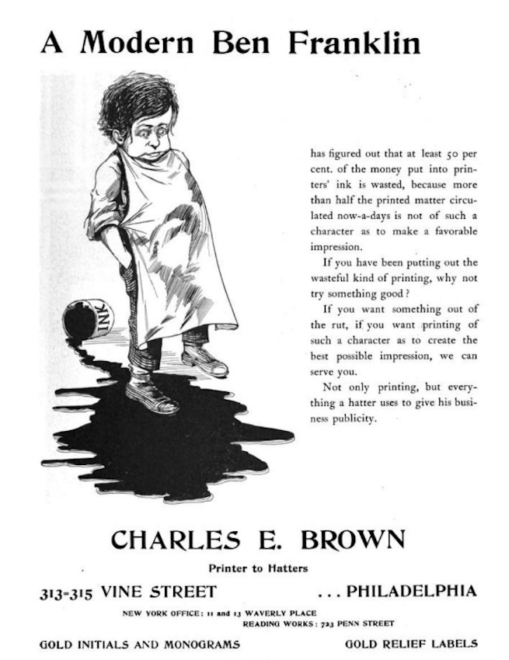 Advertisement for Charles E. Brown Co. shortly after moving into its factory at 313-315 Vine Street. | From The American Hatter, Volume 29, 1900

Brown died at the age of 47 on March 8, 1905 in his home at 1907 N. Broad Street. The Clothier and Furnisher remembered the following of Brown: “One of the most striking features of Mr. Brown’s personality was the display of energy and directness employed in accomplishing whatever was attempted. These qualities seemed to peculiarly apply in his business, which of itself involved an immense amount of detail. Mr. Brown made friends easily, and many of his intimates were men whose acquaintance was first formed in the prosecution of his everyday business.” Unfortunately, Brown’s business did not survive for too long after his death. 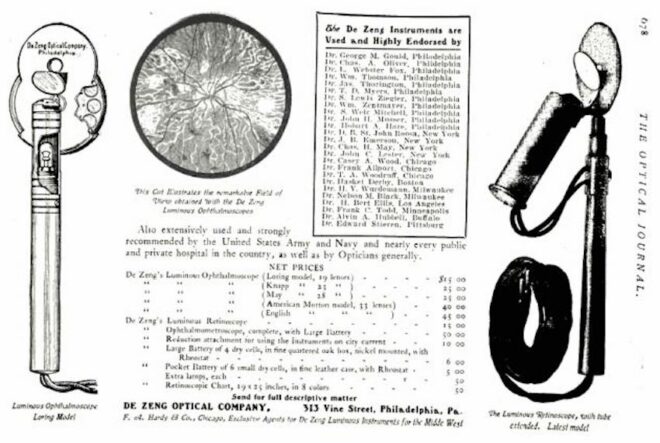 In the following years the factory was home to several businesses that manufactured a variety of products. From 1903 until 1909, the De Zeng Optical Company, and later the Standard Optical Instrument Company, made an assortment of products here, most notably ophthalmoscopes and retinoscopes. An ad for the ophthalmoscope stated that “it is the most valuable addition that has been made to medical instrumentation in many years.” The company claimed that several diseases and illnesses, such as diabetes, syphilis, locomotor ataxia, heart disease, brain lesions, cataracts, and glaucoma, could be detected through examining the eye using this instrument.

In 1919, Reid & Pancoast, Inc. was assembling a prophylactic cabinet, used to clean teeth, at the factory. The machine had “a motor-driven air compressor capable of delivering a considerable volume of air at any desired pressure.” That same year, the Nicholas Bilger Webbing Company moved from this location to another on N. Hutchinson Street.

The factory was eventually separated into sections, one of which housed leather manufacturers. Advertisements and directories from 1909 until 1911 show the Philadelphia Belting Co. at 313-315 Vine Street. The business would later move to its own factory at 601 Spring Garden Street. A large, well-preserved ghost sign can still be seen today on the building’s west-facing wall. An advertisement from 1918 shows the Shingle Leather Co. at the Vine Street factory producing “rough curried leather for belting manufacturers.” A directory from 1922 depicts a man named Albert Leven engaged in the leather business here, and a 1928 directory lists the Shipley & Vaux Shoe Manufacturing Company listed at 313 Vine Street. This is the company that painted their advertisement on top of the Charles E. Brown & Co. wooden sign. Shoe manufacturing in Old City, especially that of leather, became prominent at this time, with a number of businesses, factories, and tanneries in the area.

Directories from 1947 show 313-15 Vine Street occupied by the Dougherty Bedding Co., selling mattresses and bedding and the Quaker City Paper Company. The factory has since been renovated and is now known as The Printing House, an apartment complex with 27 luxury units. 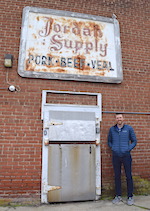