A Dearth of Delis: In Remembrance of Philly’s Jewish Eateries

At one time, there was no shortage of Jewish restaurants in Philadelphia. Legendary Kosher steakhouses, dairy restaurants, and delis did brisk business, serving up Eastern European staples that connected American Jews with their culinary heritage. You could live in Wynnewood, work in Center City, and have lunch in Minsk. But by the 1970s, these bastions of ethnic comfort food began to vanish. Where did they go and why?

The Americanization of Kosher Cuisine 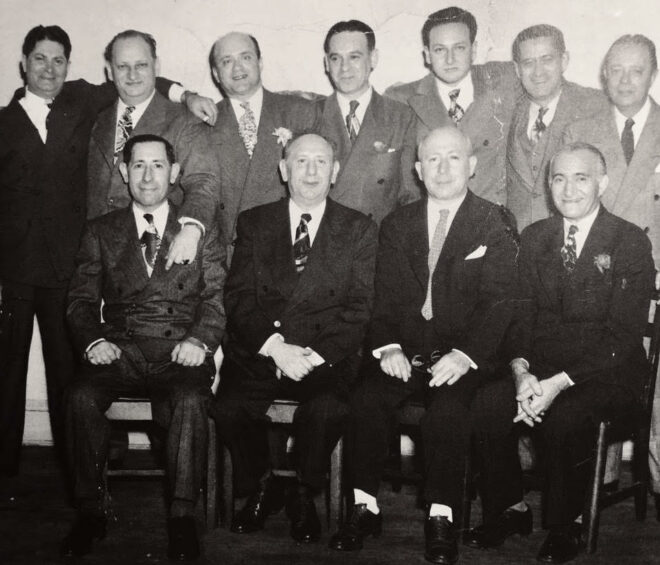 The staff of the Ambassador, once a popular Jewish vegetarian and dairy restaurant, at 7th Street and Girard Avenue. Date unknown. | Photo courtesy of Allen Katz via The Jewish Community Around North Broad Street by Allen Meyers

In the late 19th century, successive waves of impoverished, Yiddish-speaking Eastern European Jews poured into Philadelphia. These new arrivals brought with them a determination to assimilate, while, in other ways, they held tightly to their ancestral roots. Jewish immigrants were desperate to escape the poverty and persecution of the Russian Empire, but they continued to cherish the Kosher cuisine of their origins, be it Ukrainian, Romanian, Lithuanian, Hungarian, or Polish.

Because keeping Kosher meant separating dairy meals from meat meals, the first Jewish restaurants were steakhouses or dairy restaurants serving vegetarian foods and fish. In the early 1900s, there were three dairy restaurants on the 400 block of South 5th Street and three steak houses on the 500 block. This was the heart of the Jewish Quarter. Patrons dined on planked steaks, heavily seasoned with garlic, at Uhr’s Original Romanian Restaurant, 509 South 5th Street. Everything was homemade. Everything was fresh. Yiddish actors from the Arch Street Theater flocked there, as well as wedding parties.

Two other Kosher dairy restaurants–the Blintza at Broad and Spruce Streets, now the site of ArtHaus residential tower, and the Ambassador at 7th Street and Girard Avenue–were highly regarded for their Jewish specialties, including cold beet borscht, smoked fish, baked flounder, and surly waiters who could cut wise in Yiddish. The quintessential dairy restaurant item was blintzes, a crepe-filled with sweet cheese, topped with sour cream, and served with warmed, pitted sour cherries. In these establishments you didn’t tell the waiter what you wanted to eat, the waiter told you. 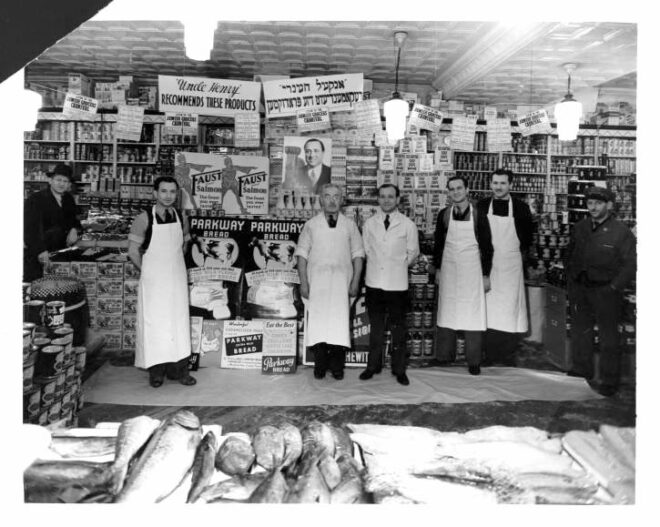 Meanwhile, by the 1950s Jewish delis were as omnipresent as Starbucks coffee shops are today. Popular delis in Center City included Bain’s, the Corned Beef Academy, Robert’s, the R&W, and Day’s. While delis did big lunch business, only Day’s was a swinging night spot with beer on tap.

How did we get from this plethora of Jewish delis to just four–Famous Fourth Street, Schlesinger’s, Bain’s, and Hershel’s–and not a single Kosher steakhouse or dairy restaurant? Blame it on the 1960s. When Philadelphia’s Jewish population began to migrate out of the city for the western suburbs, Cherry Hill, and the far Northeast, they didn’t want the next generation to slice pastrami. They wanted them to go to law school. 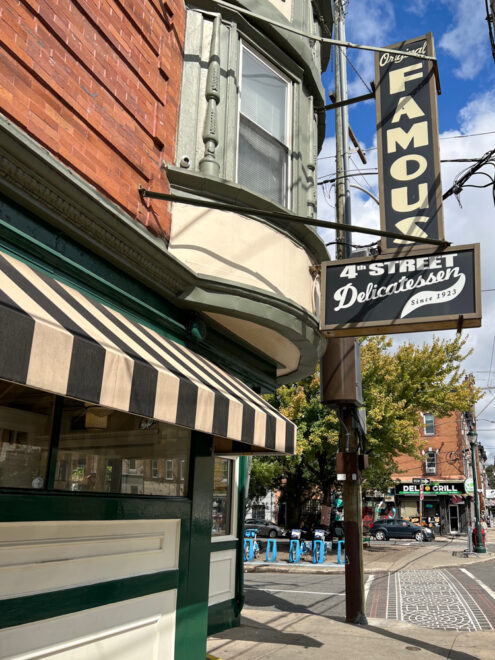 Another reason: In the 1960s, the former Jewish Quarter, now known as Queen Village, was plagued with urban blight. Jewish eateries moved to the city limits and beyond. Uhr’s Steakhouse relocated to Wynnefield, turning a decrepit movie theater, The Wynne, into an upscale catering hall. At the time, Wynnefield was a lively Jewish community with several synagogues, Jewish bakeries, and a popular deli, Murray’s.

When Jews eventually vacated Wynnefield, Murray’s crossed City Avenue to relocate in Bala Cynwyd. Ben and Irv’s, which had been on Ogontz Ave in West Oak Lane since 1954, held out as long as possible before following their clientele to Huntington Valley in 1984.

A corned beef sandwich at Famous Fourth Street Delicatessen in South Philadelphia now costs $21.75. However, patrons happily pay for it. Why? Because authentic Jewish delis are so rare they have almost turned into interactive museums–the only place where you can taste, smell and touch a world that no longer exists, along with all of the pretense of being Kosher. You want a BLT at Famous Fourth Street? No problem. 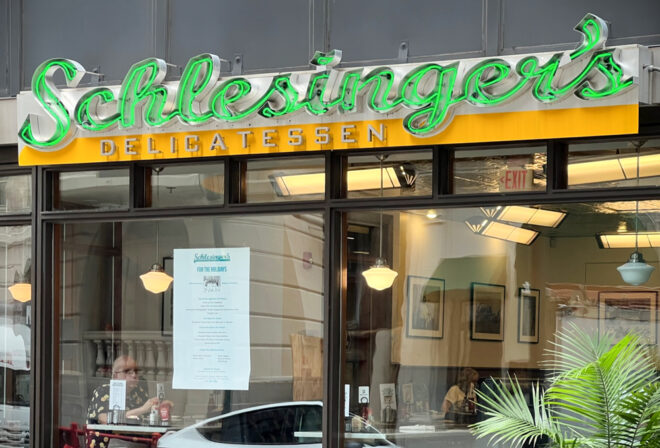 Schlesinger’s Deli is the last remaining Jewish deli in Center City if you don’t count the food court franchises in Liberty Place and the Bellevue. “I always loved a good sandwich,” said Schlesinger co-owner, former City Councilperson, and real estate mogul Alan Domb. “I came to Philly in the 1970s, and my first venture was the Kibbitz Room on Locust Street. Eventually, my partner decided to relocate the restaurant to Cherry Hill.” Rather than walk away from the deli biz, Domb opened Schlesinger’s in the same location in 2010.

“Schlesinger is my mother’s maiden name,” said Domb. “Her parents had a deli in West New York, New Jersey starting in the 1930s.” Schlesinger’s menu is like leafing through a family album filled with photos and original recipes, including his grandmother’s chicken-in-a-pot. “Our goal at Schlesinger’s is about having fun,” said Domb. “I eat turkey for my physical health and pastrami for my mental health.”

Domb is pragmatic about the demise of Jewish restaurants in the city. “Look at Zahav and Abe Fisher. They are bringing a new dimension to the Jewish restaurant scene,” he said. When I checked Abe Fisher’s menu, I was heartened. Sure enough, it features Romanian flat iron steak.