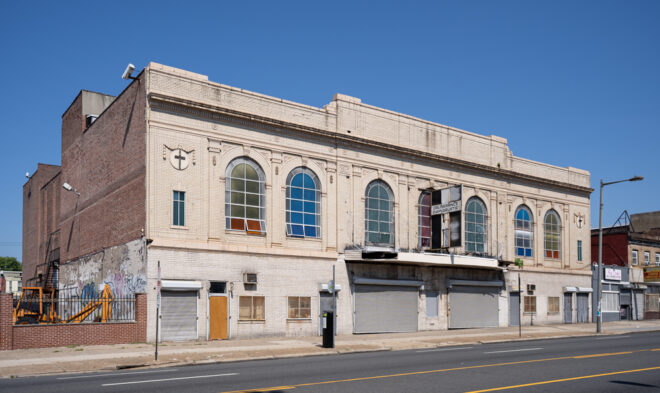 The Logan Theater at 4732 N. Broad Street opened in 1923 and was vacated by its last owner in 2005. Director and playwright Nolbert Brown Jr. hopes to reopen the old movie palace as a multi-use entertainment venue akin to the Apollo Theater in Harlem. | Photo: Michael Bixler

Much of my teenage years were spent at the intersection of Broad and Wyoming. That time was never a full day of any specific activity, but it did add up. 10 to 20 minutes here and there or longer if I engaged in a conversation or simply took a minute to sit and look around.

When my family moved to the area in the mid-1990s the landscape was naturally different. A used car lot was once on the west side of Broad Street, while a Kentucky Fried Chicken and a Budget Video occupied the northeast corner. For as long as I have lived in the area, The Way of the Cross Church has been the only constant place in operation.

Today, you might spot a pair of Mormons leaving their headquarters. Sid Booker’s Shrimp Corner is usually busy serving its famous baskets of fried seafood. During the weekday parents drop off and pick up their children at Cooke Elementary. On Sundays, the Cambodian Evangelical Church opens its doors and parishioners gather. Sometimes they have a small cook-out and I enjoy those moments for the delicious, lingering smells. It’s a mostly sleepy block of North Philadelphia, so when something changes everyone notices, like a hopeful plan to open a music venue in the old movie theater at 4732 N. Broad Street. 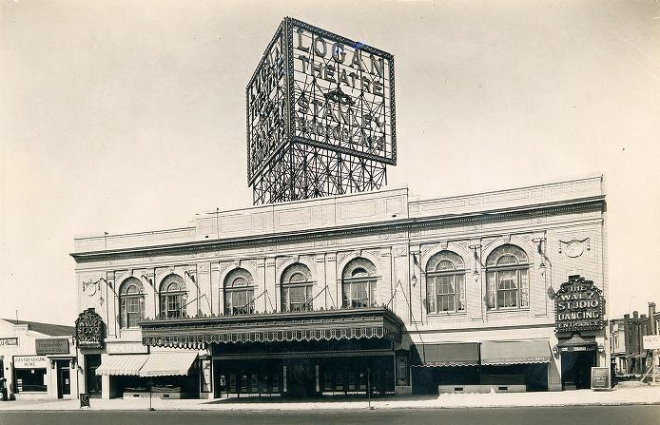 The Logan Theater upon opening in 1923. | Photo courtesy of The Athenaeum of Philadelphia

The Logan Theater was built in 1924 for the Stanley Company of America and designed by architectural firm Hoffman & Henon. The 1,894-seat theater originally screened silent films. Its first feature was The Common Law starring Corinne Griffith. The film was accompanied by a live orchestra, known as The Loganians, that included a Kimball pipe organ. Logan Theater would continue in this fashion until making the switch to the more popular sound film format in the 1940s.

Interior architectural details included depictions of mythological creatures and a fresco of a ship in the lobby. A ballroom was on the second floor, known as the Waltz Studio, which featured live performances that had audiences reveling until the late hours. 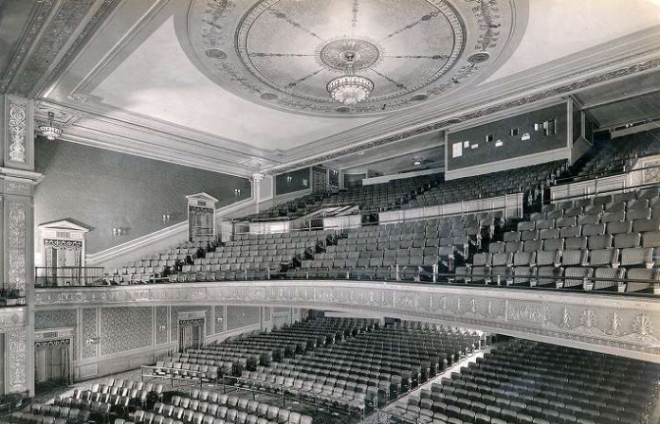 The auditorium of the Logan Theater in 1923. | Photo courtesy of The Athenaeum of Philadelphia

The theater remained in operation until January 30, 1973 when it featured its last films, Blindman, featuring Beatles drummer Ringo Star, and Trouble Man, a blaxploitation crime thriller. In May 1973 the building was sold to the Deliverance Evangelist Church by RKO Stanley Warner for $350,000. The church remained at this location until 1992.

The theater sat vacant for more than a decade until it was purchased by Dr. Owen Williamson in 2005. The renovation of the building became a labor of love to honor of his late wife Claretilda. Starting with a leaking roof, Dr. Williamson continued to repair and repaint the theater, slowly working to bringing it back to its former glory. Unfortunately, over time, the project became too expensive for Dr. Williamson and it returned to vacancy once more. 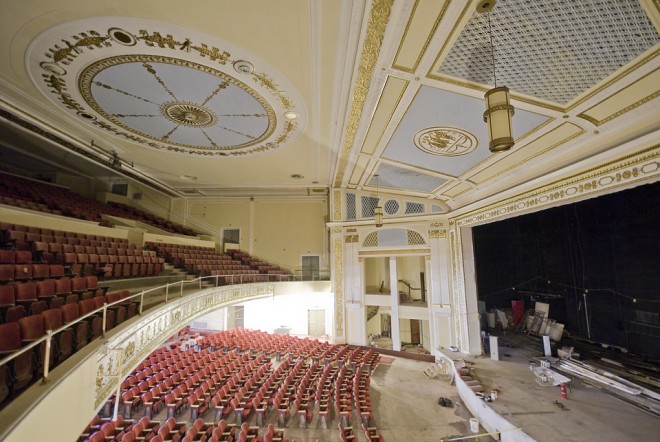 Nolbert Brown Jr. claims that his career spans from the creation of the iconic fictional character George Jefferson on the TV show All in the Family to writing for the stage and directing plays like The Life Story of Marvin Gaye, Bubbling Brown Sugar, and an upcoming remake of the 1959 film Imitation of Life. His work has earned him multiple Tony, Urban, and Gospel Awards.

Brown’s alleged philanthropy has gone towards trying to save local landmarks like the Germantown YMCA, with a $1 million donation two years before it closed in 2008, and the Lansdale Performing Arts Theater. His current mission is to bring the Logan Theater back as the Ceceliy Tyson Music Theater under his organization The American Emerald Awards Foundation. 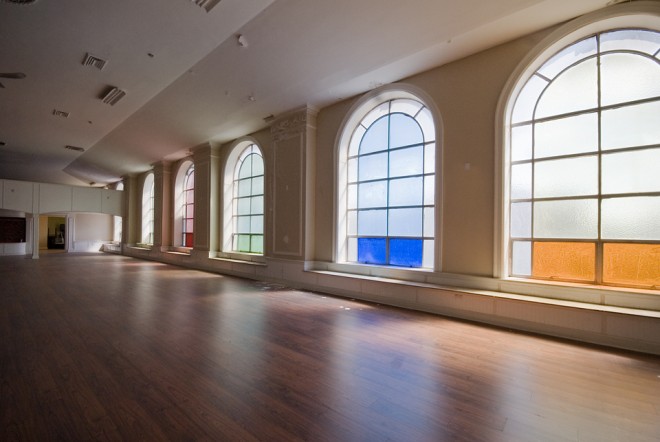 Spearheaded by chief officer of operations, Damariz Winborne, she says the theater currently has a scheduled soft opening on February 1, 2023. An official grand opening is planned to coincide with the 100-year anniversary of the Logan Theater’s original 1923 opening. The venue will be renamed after groundbreaking African American actress Cicely Tyson, who had a seven-decade career until her passing in January 2021.

Both principals overseeing the restoration project took turns showing me around the interior. My immediate impression was that the reactivating the building is part of a goal to bring back a component of North Philadelphia that has been buried under the long-standing stigma of divestment, minus the recently gentrifying areas in Francisville and around Temple University. 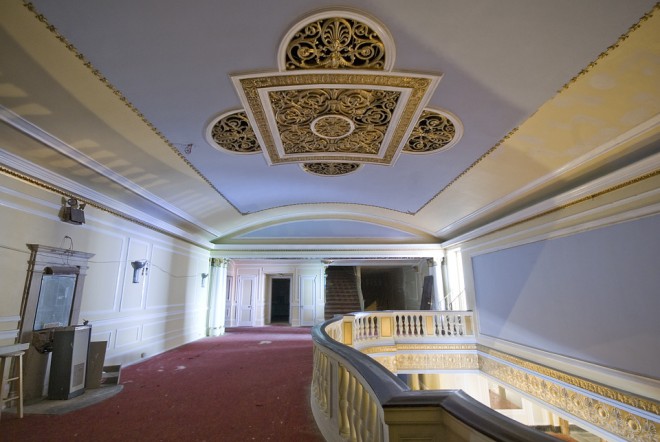 Brown and his associates said the theater will be renovated and reopened under the mantra “For us, by us, from us.” The project is seen as a course correction that will pay homage to the days when the city was known for its distinctive Philly Soul that came from the studios of Philadelphia International Records, Gamble & Huff, and Sigma Sound. There will be no rap or hip hop acts on the performance roster. Instead, the focus will be on soul, R&B, gospel, comedy, dance, and related acts. Performers tentatively on the schedule include Jeffrey Osborne, Mavis Staples, Mighty Clouds of Joy, and Rose Royce to name a few. Instead of going to venues in Atlantic City, the revenue they hope to generate at the Ceceliy Tyson Music Theater will stay in the community. 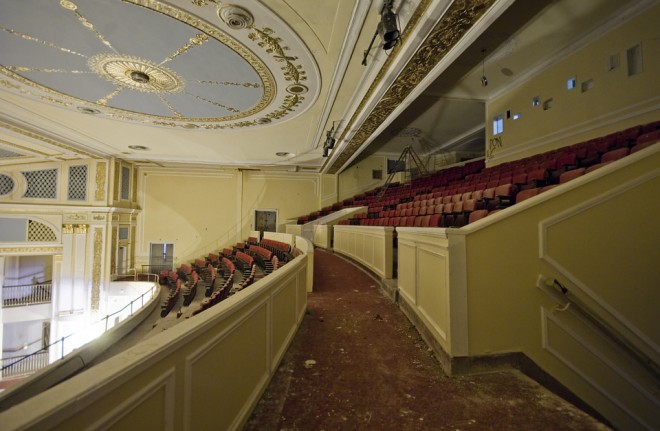 As locals poked their heads into the front door to see what the commotion was about, Winborne began taking down their information as part of the interviewing process. The opening of the theater is expected to bring about 200 to 350 jobs to the area ranging from ticket takers, ushers, kitchen staff, custodians, and management. Starting wages are expected to be around $15 an hour. VIP booths will be available for special guests, and a house orchestra made up of local musicians will also play during events.

A banquet hall is planned for the long dormant ballroom upstairs which will be closed off to events happening in the main performance space and rented for catered events. A buildout of the unfinished lower level space will serve as a performing arts and music school. The project also includes space for a satellite location of Germantown’s Bleu Soul restaurant, which is also owned by Brown. A large mural is planned for the exterior wall of the parking lot that will feature various Black musicians and luminaries as well as the theater’s owner Dr. Williamson and his wife Claretilda. 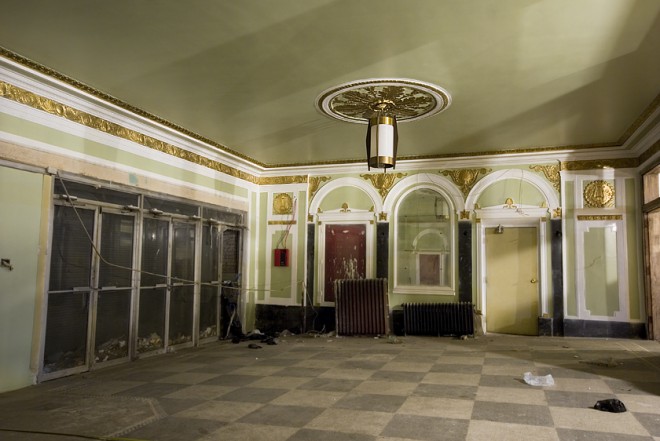 The lobby of the Logan Theater in 2012. | Photo: Chandra Lampreich

Initial plans are to reinstate the operational programming of the original Logan Theater with matinees and special events from Tuesday to Sunday. Special events include posthumous awards including one for singer-songwriter Minnie Ripperton whose daughter, the comedian and actress Maya Rudolph, is scheduled to accept in her mother’s honor.

Brown’s vision for the venue is to become Philadelphia’s own Apollo Theater and to informally christen Broad and Wyoming as Black Broadway. Organizer’s say that the space will not simply be providing entertainment, but for giving back to the community. For example, a free meals program will take place during the holidays.