English Village Gets Medieval in the Suburbs 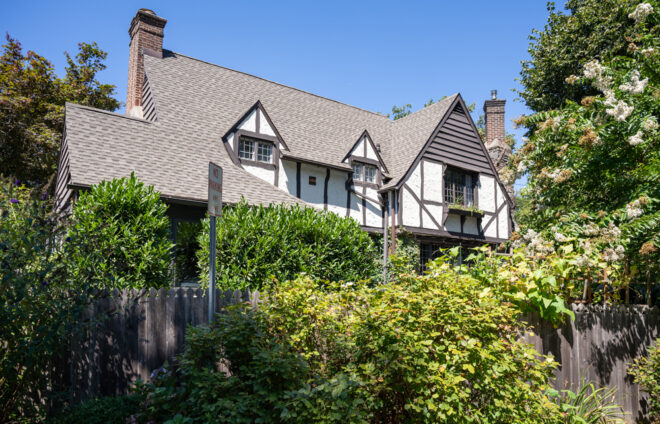 Unless someone gave you an architectural treasure map, you could drive around Wynnewood all day long and never find its historic English Village, an almost one hundred year-old pocket neighborhood that was inspired by Stratford-upon-Avon.

Located adjacent to Lower Merion High School, just off Montgomery Avenue between Cherry Lane and Wister Road, the English Village was built in the 1920s and is tucked into a seemingly average suburb. The 29 Tudor Revival homes, influenced by the architecture of medieval England, sprang from the imagination of developers Donald Love, an attorney-turned-real estate developer, and his brother S. Arthur Love, an architect who had visited England’s countryside during World War I. Both builders maintained residences in the village and named one of it’s streets, Love’s Lane, after themselves. 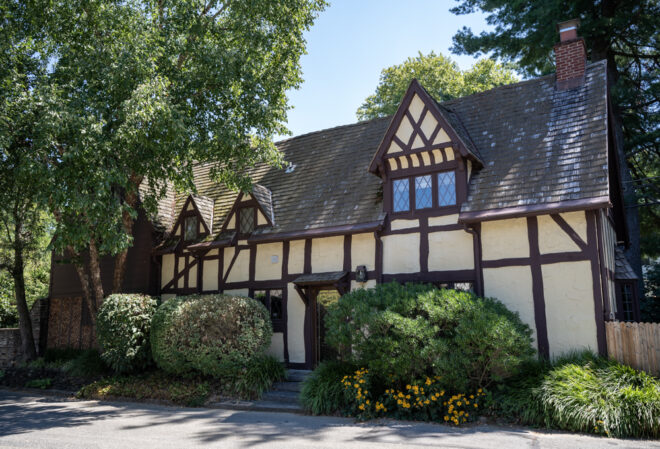 The English Village was built in the 1920s. | Photo: Michael Bixler

Comprised of 20 semi-detached houses and nine singles on a five-acre tract, the homes, completed in 1928, are now known as the English Village Historic District. It was designated by the Pennsylvania Historical and Museum Commission in 2010.

On a street named Arthur’s Round Table you will find four bedroom, two bathroom mansions. No two homes look exactly alike. They feature Henry Mercer tiles scattered throughout their floors and in some of the exterior brickwork. The field stone came from local quarries and the timber was reclaimed from local barns and railroad ties. Houses are separated by stone or brick walls, hedges, and fences on narrow winding lanes in the shape of an oval, Arthur’s Round Table, and an S-shaped tail, Love’s Lane. 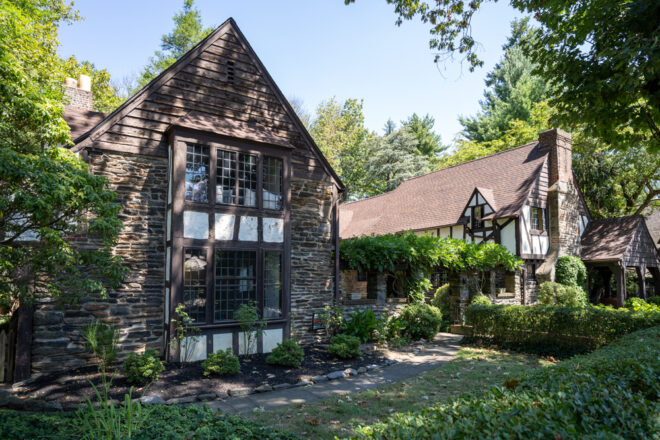 One of the larger Tudor Revival homes in the thematic neighborhood. | Photo: Michael Bixler

With its winding lanes, lush English gardens, tightly-sited houses, and narrow setbacks, the neighborhood appears to arise like Brigadoon–a mirage from another time and place.

Tudor Revival style was a reaction to the Victorian Gothic Revival of the late 19th century and incorporated elements of the Arts and Crafts movement. Examples appeared on the Main Line as early as 1903 as well as in East Falls, Mt Airy, and Chestnut Hill. 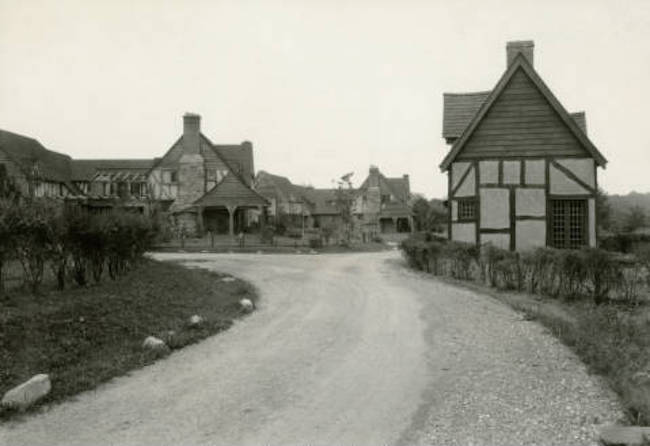 Guildford, a Tudor Revival mansion in Chestnut Hill owned by Philadelphia industrialist George W. Elkins, was built by European craftsmen with 16th century architectural elements imported from England. Elkins had been impressed with the home of the Duke of Sutherland in Surrey, England and replicated it on an 18-acre estate. 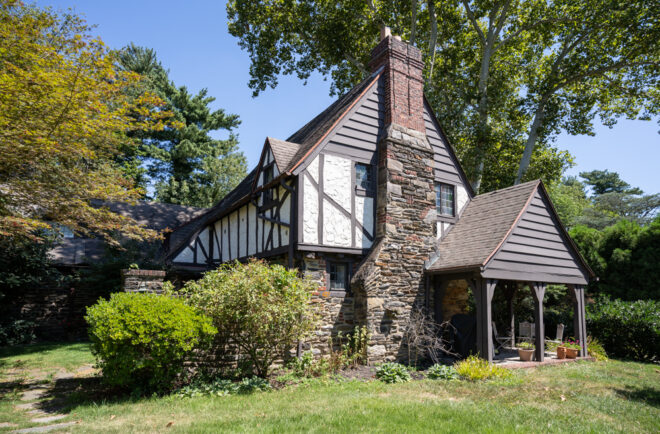 The principal building material is local stone. Stucco or used bricks, in various patterns, provide infill between the timbers. Massive end chimneys of stone and decorative brick contrast with delicate small-paned windows. The houses are all two or two-and-a-half stories tall and roofed-in wood or composition shingles. Historic details such as casement windows, rain barrels, bird houses, and statuary niches add authenticity. The absence of sidewalks differentiates the English Village from other Wynnewood developments of its time. 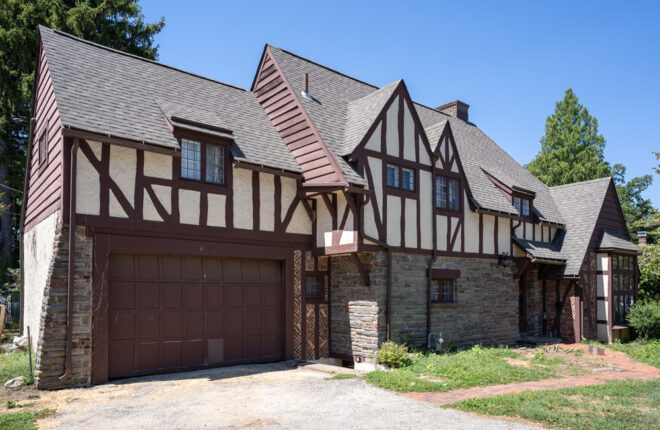 This Tudor Revival home and its landscaping is currently being renovated. | Photo: Michael Bixler

When it was completed the English Village was an instant success. The community became known as an enclave for artists and writers who sought quiet, intimate surroundings. Many created studios and artist’s spaces within their homes, including portraitist Sue May, her husband watercolor artist Paul Gill, and sculptor-poet Agnes Yarnell who sculpted busts of the celebrities of her day including Judith Anderson, Edna St. Vincent Millay, and Sir John Gielgud. It has been said that former First Lady Eleanor Roosevelt visited friends there and most likely Yarnell.

The best time to visit the Old English Village is in the spring when the gardens are in full bloom and the air is scented with wisteria and magnolia. Street parking is very limited. If you go, park in the Lower Merion High School lot, and enjoy the historic district on foot or bicycle. A self-guided tour is available through the Lower Merion Conservancy HERE.