A New Life for a Towering Figure in Germantown 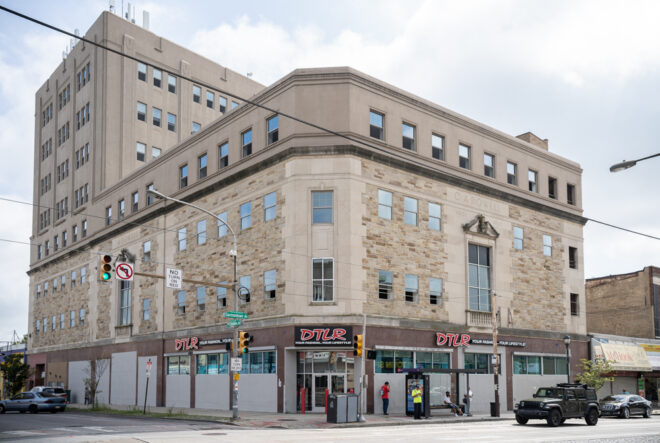 The former C. A. Rowell department store at Germantown and Chelten Avenues is currently being converted into apartments. | Photo: Michael Bixler

By Germantown standards, the eight-story building at 5627-33 Germantown Avenue is a high rise. “The views from the upper floors are uncommon for the neighborhood,” acknowledged Scott Woodruff, director of architecture at Designblendz. It was constructed in 1898 as a two-story building for the Germantown Trust Company, which expanded the building with a vertical addition in 1929. The architect was Arthur Brockie, a Germantown native whose projects included homes, a banks, and the Sedgeley Club Boathouse on Kelly Drive. 20 years later the building became the home of the C. A. Rowell Department Store. Architect Herbert Beidler gave it the Georgian Revival facade it still has today, with a chiseled “C. A. Rowell” over the entrance.

During the middle of the 20th century, Rowell’s was a symbol of Germantown’s status as Philadelphia’s second largest commercial district after Center City. Although the neighborhood was home to a number of department stores, including Woolworth’s, Cherry’s, Allen’s and S.S. Kresge’s, Rowell’s stood out as larger and more upscale than the others.

In 1974, when Curtis Sisco Sr. purchased the company. According to a historic nomination written by Noah Yoder, it became the first African American-owned department store in the United States. Sisco also kept the name. A photograph from that same year in the Germantowne Crier shows large three-dimensional cursive “C.A. Rowell” signatures on both the Chelten and Germantown Avenue sides of the building. 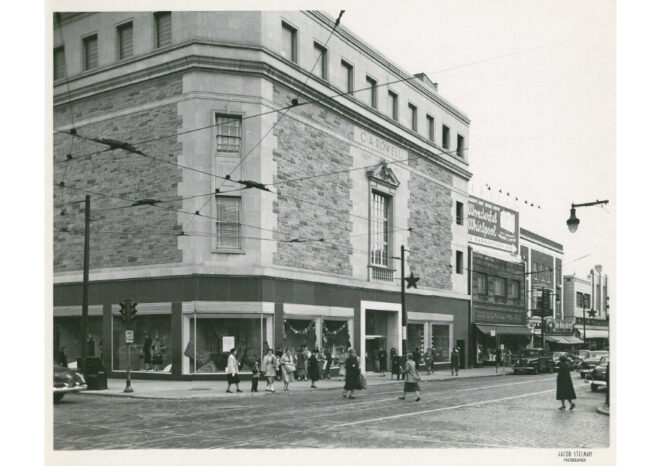 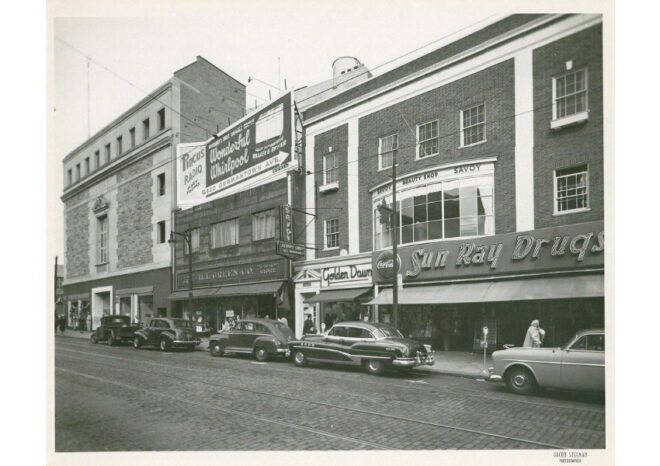 C. A. Rowell department store in 1953. | Photos courtesy of The Athenaeum of Philadelphia

Unfortunately, the once-thriving shopping district was in decline at that time, and Sisco’s efforts succumbed after only a few years. More recently, it has housed a Walgreen’s drugstore on the street level and offices on the floors above.

Now, a new life is looming for the old building as an apartment block. Woodruff describes it as a mix of 47 one, two, and three bedroom market-rate units.

“All the floors two through seven were vacant. Just a shell,” he noted. “The back side of the building doesn’t have lots of windows, so we’re tucking amenities back there. The layout of the building allowed us to design amenities, including a gym, lounge, work-from-home flex space, and a large bicycle parking room.” The footprint of the building completely covers the lot, so there will not be any car parking. 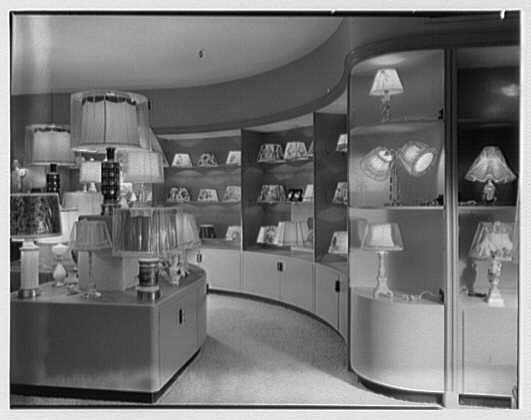 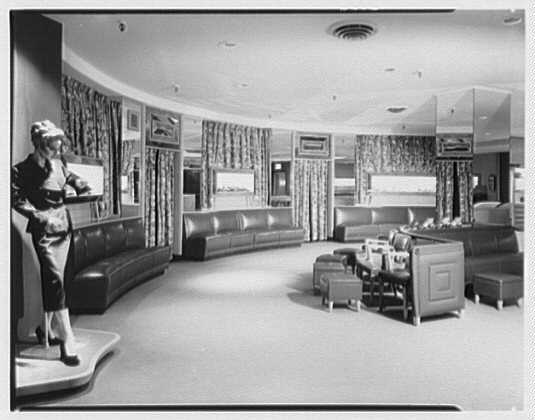 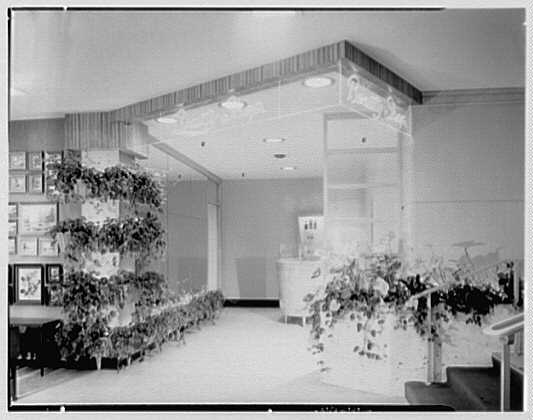 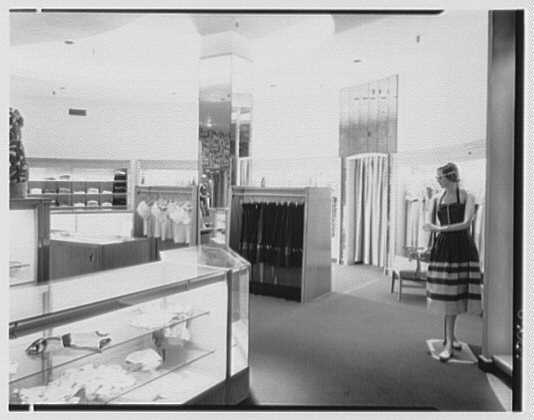 The site is zoned CMX-3, which stands for “community commercial mixed-use.” It allows for multi-family housing and retail and service businesses serving local and regional clientele, so the plans call for commercial space to still be located on the ground floor.

By choosing adaptive reuse, the plans won’t utilize any of the height bonuses available under CMX-3 zoning that often raise concerns among residents, particularly in the more residential areas of the northwest.

It’s a contributing building to the Colonial Germantown Historic District on the National Register of Historic Places, and in 2020 received its own designation on the Philadelphia Register of Historic Places. The developer, Chelten Lofts, LLC, intends to utilize historic tax credits and will not be altering the facade. “The only exterior work we are planning is to reopen some windows that had been covered over,” said Woodruff. However, he did note that they will not be keeping a banded rectangle painted white with the name “C. A. Rowell” inscribed in black near the top of the rear elevation of the eight-story section, which was likely a much later addition.

“We’re starting to do more adaptive reuse,” he noted, citing 19th and early 20th century warehouses in Kensington they’ve converted to loft living. “The majority are well built and in good shape. They generally have high ceilings and lots of light.” And, he pointed out, the 10-year tax abatement still applies to renovated properties. 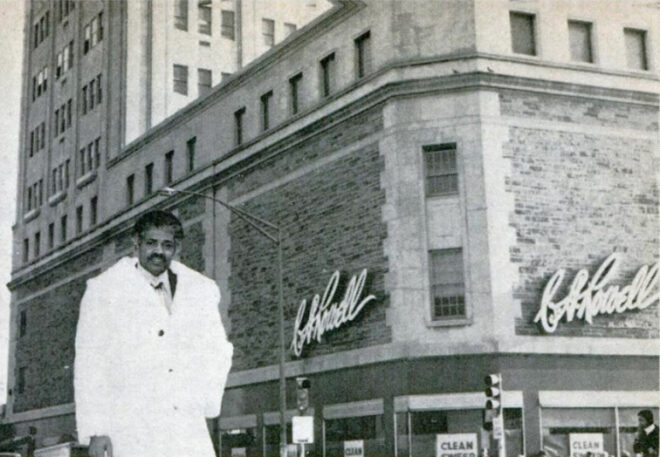 Curtis Sisco Sr. purchased the business in 1974. It was the first department store owned by an African American and is believed to be the largest Black-owned business in the United States at the time. | Photo courtesy of Noah Yoder

Adaptive reuse of old buildings is not without some challenges. Even buildings that are only 50 years old or so are outdated when it comes to today’s standards for insulation and fire suppression, for example. On the upside, Woodruff said, “So much of Philadelphia’s building stock is masonry, so the big difference is these buildings are waterproof.”

Another issue is how to attach and integrate today’s building materials into an older building’s materials, taking both structural factors and aesthetics into consideration.

The addition of market rate apartments with lots of amenities could raise concerns about gentrification in a neighborhood of more modest means. On the other hand, the project puts a now-vacant building back in use and won’t displace any current residents. Once the renovations are completed, the former C. A. Rowell building could once again serve as an anchor at a major intersection in Germantown.