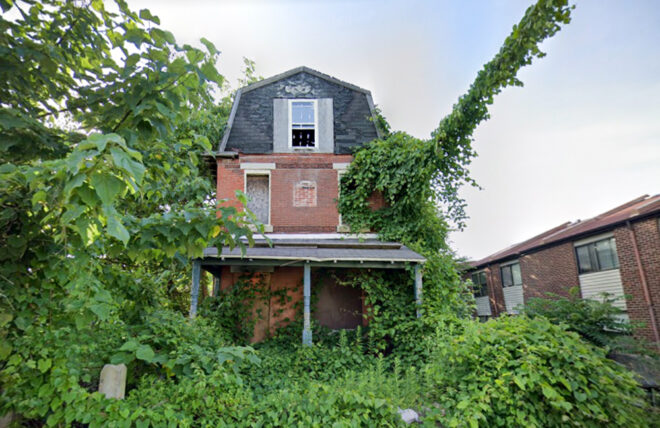 The blighted property at 101 East Collom Street, owned by Germantown Settlement, was demolished after the Department of Licenses and Inspections deemed it imminently dangerous. | Image: Google Street View

A swath of 25 properties that for years have plagued sections of Germantown and Mount Airy as a nuisance to neighbors and substandard housing for residents appear to be on the way to redevelopment. Scattered over several different blocks, the parcels include apartment buildings, row houses, twins, and townhouse-style developments. They total 114 housing units, of which 21 are currently occupied.

Records indicate dozens of violations issued by the Department of License and Inspections (L&I) over more than a decade that include weakened floors, water damage, mold, elevated lead and radon levels, unsafe heating equipment, hazardous electrical systems, and more.

Although the locations and origins of the buildings vary, they all share a recent history of acquisition by Germantown Settlement. Originally a Quaker charity founded in the 1880s, by the 1990s it was headed by Emanuel Freeman, who expanded it into an array of nonprofit and for-profit subsidiaries. He marshaled hundreds of millions of dollars in public and private money in the ensuing two decades, much of it supposedly to acquire and renovate properties for affordable housing. However, even as grants and loans poured in, many of the organization’s hundreds of properties fell into disrepair.

At one point Germantown Settlement even operated a charter school, which collapsed under the weight of the high rent it owed to another subsidiary and closed in 2010 after being open for nine years.

Germantown Settlement declared bankruptcy in 2010, intending to reorganize under Chapter 11, but was ordered by a judge to sell off its assets to satisfy creditors under Chapter 7. In 2019, the Philadelphia Redevelopment Authority (PRA) repossessed 45 properties that had been connected to a group of companies led by Freeman.

The PRA hired consultants to assess the physical condition of the properties and to identify the most urgent needs. The evaluations included structural, mechanical, electrical, plumbing, and environmental issues. It addressed urgent problems in two of the properties, one with elevated radon levels and the other with lead levels in tap water. During the course of the assessment, L&I identified the building at 101 East Collom Street as imminently dangerous and demolished it. L&I also deemed the two properties at 45 and 47 East Garfield Street as unsafe structures due to fire damage. The assessment placed the total cost of repairing all of the acquired properties at about $9 million.

For its next step, the Philadelphia Housing and Development Corporation (PHDC) recently completed a series of community engagement sessions to guide them as they plan the fate of these properties. The PHDC was joined by a steering committee of nine residents and community leaders. 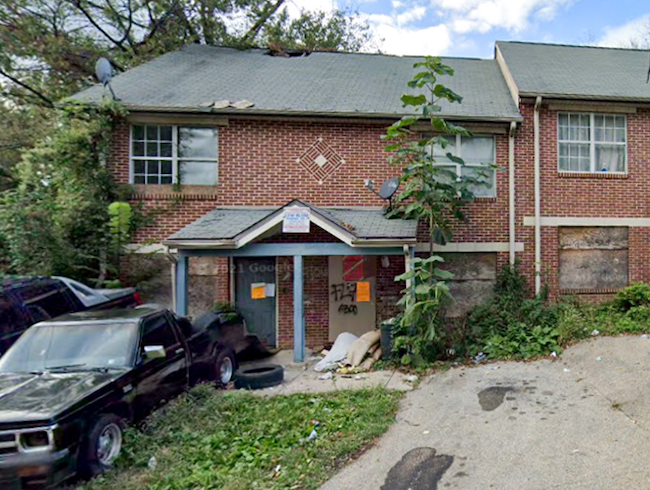 45 and 47 East Garfield Street were cited by the City for being unsafe structures after a fire damaged the two homes. | Image: Google Street View

The input from area residents reads like a check list from a preservationist’s ideal world. A top priority is affordable housing with permanent restrictions. Attendees noted that since the properties were developed with public money and are now publicly owned, they should be preserved for affordable housing. “These properties will never be sold at market rate, for at least 40 years or so,” PHDC’s president and CEO David Thomas stated at the third session. “If the residents want affordable housing, that’s what they’ll be.”

A second major concern was for ownership opportunities for current and former tenants, possibly to include discounted purchase prices, mortgage assistance options, loans, or grants for renovation costs.

Neighbors also ask for green spaces, tree plantings, and landscaping, noting that it should be included as a requirement in the Request for Proposals (RFP).

Another concern was the saving of historical elements, particularly along Germantown Avenue, where several of the properties are located.

Community members also placed a high priority on development that renovates, rather than demolishes the properties, wherever possible. Finally, they would like to see preference given to local developers and contractors.

One former Germantown Settlement property that is not included in this effort is the Germantown YWCA at 5820-24 Germantown Avenue, which the PRA bought at a sheriff’s sale in 2013. An RFP the following year rejected a bid from Mission First Housing and Ken Weinstein to convert it to an apartment complex for low-income senior citizens. Instead, at the urging of Councilmember Cindy Bass, the PRA chose a Pittsburgh-based firm KBK Enterprises to develop it into 12 one-bedroom and 12 two-bedroom living units with commercial and retail space on the first two floors of the building. After many years of inaction by the developer, the Germantown YWCA is once again owned by the City. “PRA has rescinded the selection of KBK Enterprises as the developer and is considering its options, which may result in the issuance of a new Request for Proposal,” said Jamila Davis, PHDC’s public information officer.