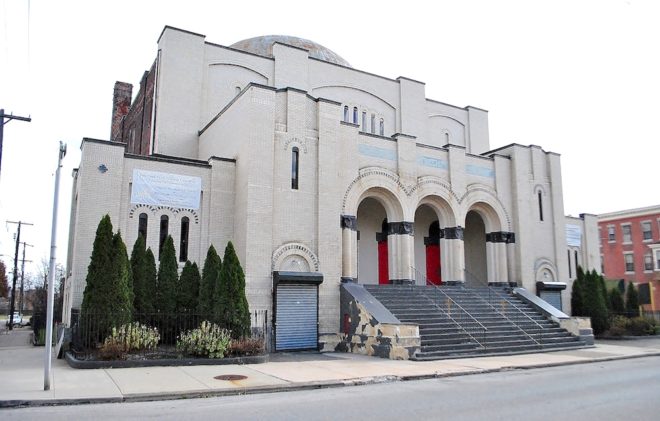 Beth Israel Temple, a Moorish Revival synagogue at 3135-49 W. Montgomery Avenue, seen here in 2015, was deemed unsafe by the City. The Department of Licenses and Inspections demolished the building in March 2021 despite being listed for legal protections on the Philadelphia Register of Historic Places. | Photo: Michael Buozis

Philadelphia’s realty transfer tax, already one of the highest in the nation, will soon include a new fee. Last month City Council unanimously passed a bill that would add an additional $15 fee onto each transfer of real estate or recording of a deed or mortgage in support of a new fund for the City. Mayor Jim Kenney signed the bill into law on June 26. The fund will cover the City’s costs of demolition of what it considers blighted properties. The bill states that the Department of Licenses and Inspections (L&I) will continue to raze buildings “for the purpose of increasing economic development.”

To access the fund, L&I would need to determine that a property meets at least three of the criteria included in Pennsylvania’s Act 135, the Abandoned and Blighted Property Conservatorship Act. Some of the criteria involve obvious and urgent problems such as physically unsafe structures and those that pose a risk of fire. Others are less life threatening, like the lack of substantial rehabilitation for 12 months, the presence of overgrown vegetation, or an appearance that ”negatively affects the economic well being of residents and businesses in close proximity.” These criteria are rather common in Philadelphia and are often present at properties that are not abandoned such as those in low-income neighborhoods that have historically suffered from disinvestment and others experiencing the economic pressures of gentrification.

The state’s purpose for creating Act 135 was not demolition, but to provide “for court-appointed conservators to bring residential, commercial, and industrial buildings into municipal code compliance when owners fail to comply.”

Philadelphia does indeed have a large number of blighted properties, but these days it can feel like the entire city is being torn down. In the battle between those who equate demolition with economic development and others who favor rehabilitation where possible, the issue of financial costs inevitably comes up.

Indeed, the City’s current budget for demolition is “roughly $15 million across all funds in the total budget, with around $12 million coming from the General Fund,” according to Kevin Lessard, director of communications for the Office of the Mayor. 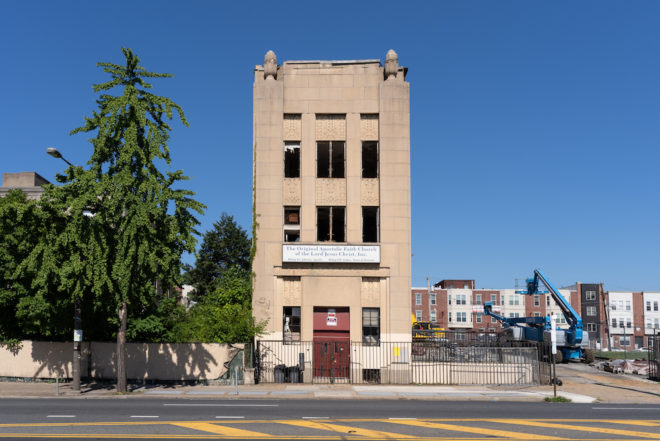 The former Levine Funeral Home at 1512-16 North Broad Street sat vacant and open to the elements after a three-alarm fire broke out in 2018. Despite advocacy efforts to save the building, which was listed on the Philadelphia Register of Historic Places, the Department of Licenses and Inspections demolished the 88-year-old structure in 2021. | Photo: Michael Bixler

According to Lessard, the demolition fund will actually help neighborhood improvements. “This funding will also allow us to use existing dollars, previously earmarked for demolition, on neighborhood cleanup actions aimed at enhancing quality of life: site improvements, clean and seal, nuisance property abatement, and removal of construction debris and obstructions to the footway.”

Wunsch countered that there are other ways to more directly support neighborhood improvements and avoid some demolitions. “We could take this new revenue for demolitions and instead put it into a revolving fund,” he suggested. “Other cities have revolving funds where you can get a grant for preservation and rehabilitation. If you sell the property at a profit you give back the grant money, which goes back into the fund.”

Philadelphia may just be following the lead of another state bill, which permits counties, although not Philadelphia County, to establish a fee that can be used “for a county demolition and rehabilitation fund.”

“These bills are written broadly,” noted Jane Allen, policy director for State Senator Nikil Saval, the minority chair of the Pennsylvania Senate’s Urban Affairs and Housing Committee. “It says ‘can be used,’ rather than ‘must.’” In the Philadelphia region, Delaware County has created such a fund, but opted to use it only for demolition. As of March 2021, Delaware County had collected $1,781,535, the most of the 18 counties that have established demolition funds under the bill.

Delaware County adds a lien to non-publicly owned properties to recover the amount of the demolition and site restoration costs paid by the fund. However, Philadelphia’s bill, as written, appears to only be replenished by the new fee on realty transfers and deed recordings.

While that bill chalked one up for advocates of real estate development through demolition, the Pennsylvania legislature just gave one to preservation supporters when it provided $125 million in the new state budget for the Whole-Home Repairs Program to support safety and energy efficiency improvements to owner-occupied and rental residences.

The demolition fund may be up and running by the end of September. It seems like a quick turnaround compared to other important items that could more productively inform the debate between demolition and rehabilitation, such as the survey of historic resources recommended in the 2019 final report of the Mayor’s Historic Preservation Task Force. More recently, Councilmember Cindy Bass sponsored a bill to enact a six-month moratorium on demolitions in her district to have time to create “a thorough process that is less predatory and works for everyone.” That bill has languished in the Rules Committee since February.