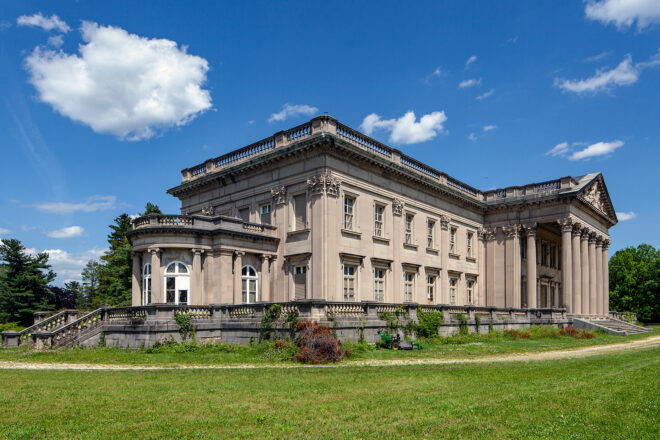 Lynnewood Hall in Elkins Park was built for for industrialist Peter A. B. Widener between 1897 and 1900 and designed by Philadelphia architect Horace Trumbauer. | Photo: Peter Woodall

The superlatives begin to feel overused, but they are the only ways to describe Lynnewood Hall in Elkins Park and its founder. At 110 rooms, it is currently the largest surviving Gilded Age mansion in the Philadelphia area. Its 268-foot enfilade–a suite of rooms aligned to create an unobstructed view from one end of its east wing to the other end of the west wing–is the longest in any residential building in the United States. The estate was built between 1897 and 1899 for Peter A. B. Widener, who owned the most Rembrandts of any private collector except Buckingham Palace.

Widener had made his fortunes in several industries. First in streetcar transportation and later a a co-founder of both U.S. Steel and the American Tobacco Company. He had two purposes for the manor. After his wife died, he wanted to keep his sons and their families nearby and to live in one home. Also, he needed a large amount of space to display his massive art collection. 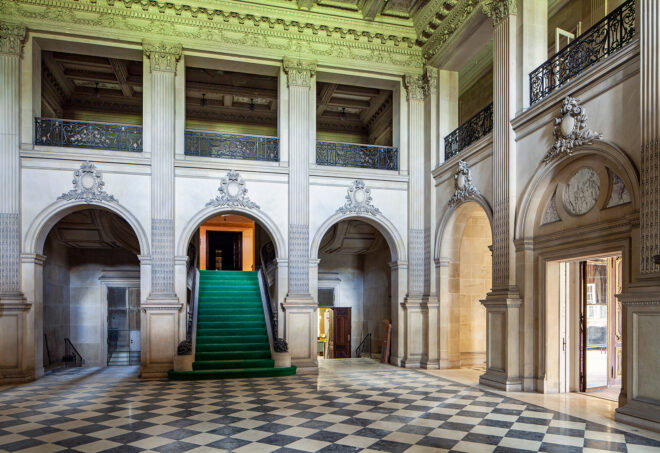 In addition to the aforementioned Rembrandts (14 in total), Widener owned many priceless works of art, including Raphael’s Small Cowper Madonna, Giovannia Bellini’s The Feast of the Gods, and many by Anthony Van Dyck, Titian, El Greco, Thomas Gainsborough, Edouard Manet, and more. The house featured five art galleries: one each for his Van Dycks, Rembrandts, Bellinis, Italian Renaissance works, and a general gallery near the grand entrance hall.

The architect for this massive project was Horace Trumbauer. Although he would later leave a significant mark on the Benjamin Franklin Parkway with his designs for the Philadelphia Museum of Art and the Parkway Central Branch of the Free Library, at the turn of the 20th century he was primarily an architect of residences. These were at first modest houses such as Overbrook Farms, but Trumbauer quickly moved on to planning Gilded Age mansions for wealthy industrialists. In addition to the Neoclassical Revival Lynnewood Hall, he also designed the eclectic Grey Towers (now part of Arcadia University), the Edward Stotesbury Neo-Georgian mansion Whitemarsh Hall, since demolished, and Italian Renaissance style Elstowe Manor, for Widener’s business partner William Elkins, among others. 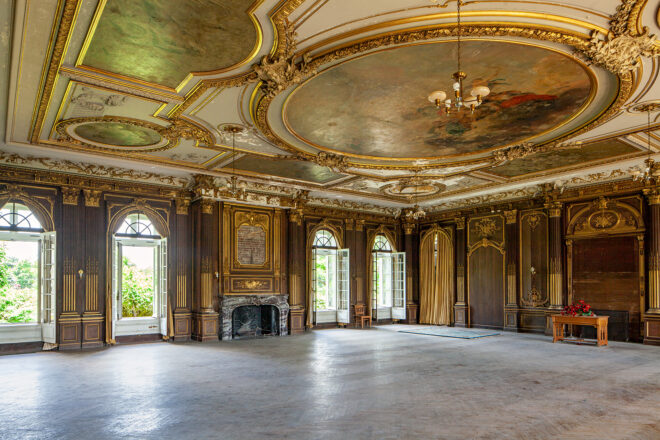 In addition to the galleries, Widener’s art collection shaped a number of other spaces in the house. The reception room next to the grand entrance hall was designed to accommodate a 9 x 15 foot tapestry by François Boucher, The Dream of Rinaldo, which dates to around 1751. An 18th century Italian mural remains on the ceiling of the ballroom, which Trumbauer and the interior designers likely planned with that artwork in mind.

For the house itself, Trumbauer matched the opulence of the art collection with every luxury appointment conceivable in 1897, including alabaster sinks in the bathroom, grand front doors of solid Florentine bronze, gilded moldings, and carved black walnut interior doors imported from London. The gardens were designed by landscape architect Jacques Greber, whose work included the Benjamin Franklin Parkway. 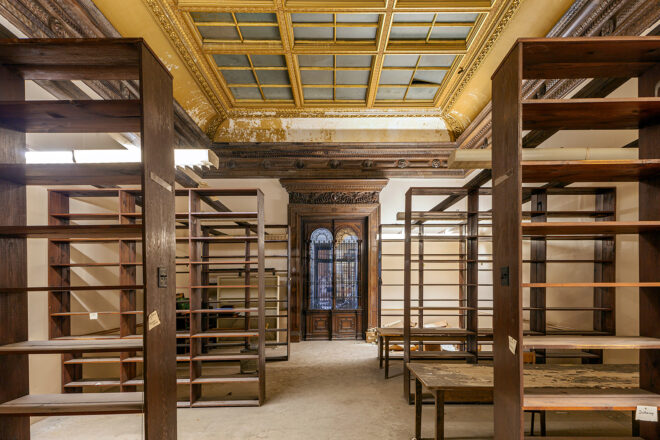 The extravagances went beyond the decorative. A central vacuum system was installed throughout the house, common today, but high-tech at the turn of the last century.

In the north wing, the attic houses a chain, pulley, and clock system that operated a series of louvers beneath the glass roof to guide daylight through the art galleries below. The Metropolitan Museum of Art had a similar system over its European collection, installed in 1939, but it was rare to see a feature like this in a residence.

In 1942, Joseph Widener, son of Peter A. B. Widener, donated over 2,000 paintings, sculptures, and decorative arts to the fledgling National Gallery of Art, following the lead of Andrew Mellon’s founding gift to the institution. 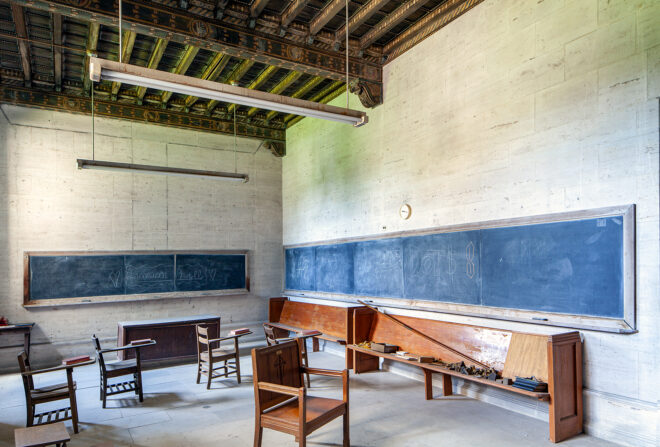 Lynnewood Hall remained the home of four generations of Wideners until 1944. It was then purchased by Carl McIntire to house the Faith Theological Seminary, which operated there for several decades.

In the latter portion of their tenure, however, the school struggled financially and turned to selling furnishings and fixtures for revenue. Maintenance was deferred as well. When the gallery for Anthony Van Dyck experienced roof leaks in the 1960s, the seminary closed the doors and basically forgot about it.

The current owner of the mansion is Dr. Richard Yoon of the Korean Presbyterian Church of New York, who had attended the seminary there. 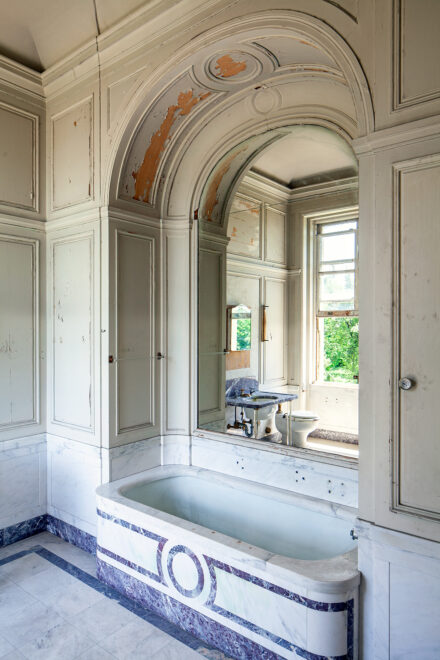 Now, another Lynnewood superlative has recently appeared. A scrappy group of individuals, from disparate locations and vocations, has united in the shared goal of preserving Lynnewood Hall, easily one of the biggest fundraising and conservation efforts ever undertaken by a newly-formed non-profit organization.

“We have the intention to acquire Lynnewood Hall,” said Angie van Scyoc, who works as a financial advisor and is the president of the Lynnewood Hall Preservation Foundation. For some, their drive comes from a broad interest in preservation, while others have a very specific focus. “I’ve been following this house online since I was 11-years-old. I had my first tour five years ago,” explained Edward Thome, a realtor from Central Pennsylvania. “It’s shocking how unknown it is in the Philadelphia area. On the internet, it’s possibly the most famous house.” That led him to reach out to the current owner, Richard Yoon, gaining his trust over time. “I now have a personal relationship with Dr. Yoon,” said Thome. “That’s how we have access to the house.” 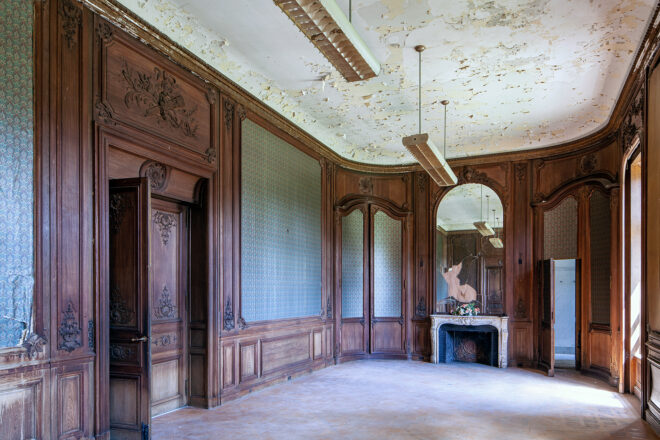 Each weekend, several volunteers travel a couple of hours to gather at the site, taking stock, cleaning up, and performing maintenance. Much of the time it’s just dirty work, but it is often punctuated with intriguing surprises. In the smoking room, there is a secret passage in one of the closets that leads to a marble bathroom that had formerly been a coatroom. An area near the family bedrooms on the second floor that houses 14 safes also features a secret room that is not included in the house plans.

The east and west wings contain bedrooms on the second floor. Architectural drawings for the house label them as Chamber A, B, etc. While being given a tour of Lynnewood Hall my hosts discovered that each bedroom had a brass letter on it, now painted over, that likely corresponded to the plans. “Every time we’re here we find something new,” remarked van Scyoc. 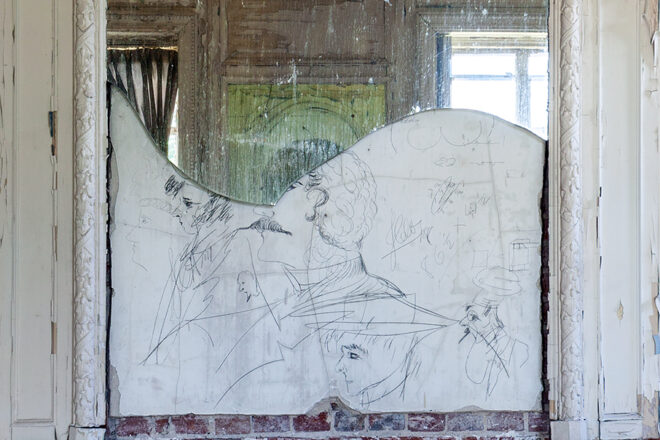 Sometimes the vandalism uncovered unexpected things, like when the damage to a mirror over a fireplace revealed sketches and measurements that were likely the work of the original designers.

Given Lynnewood Hall’s size and elaborate details, there is surely more discoveries to be made, such as the silver vault in the butler’s pantry. “To the best of our knowledge it hasn’t been opened since the Wideners were here,” said Thome.

Although the financial side of the group’s plan is certainly daunting, the board members insist that the preservation side is not as dire as many people believe. “The house is not stripped,” said Greg Denesevich, an electrical engineer from Scranton who works in building design. “It’s not falling down.” 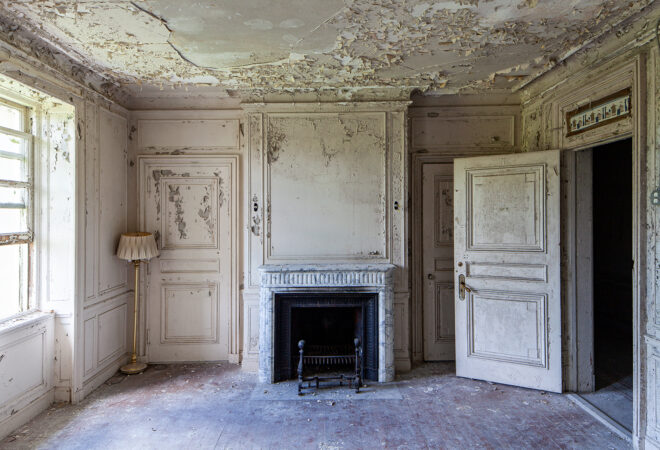 “Our two biggest priorities are to get the word out that the house is intact, not a ruin, and also to get our mission out there,” Thome declared.

The fundraising goal has yet to be determined, but the group remains confident. “There is huge community interest and support for its preservation,” said Thome. “Area residents want the green space opened up and eventually they want to see the house, too.”

“We’re actively seeking a preservation-minded investor or preservationist,” explained van Scyoc. “The problem is, anyone who wants to preserve it fully doesn’t want to pay the purchase price.” 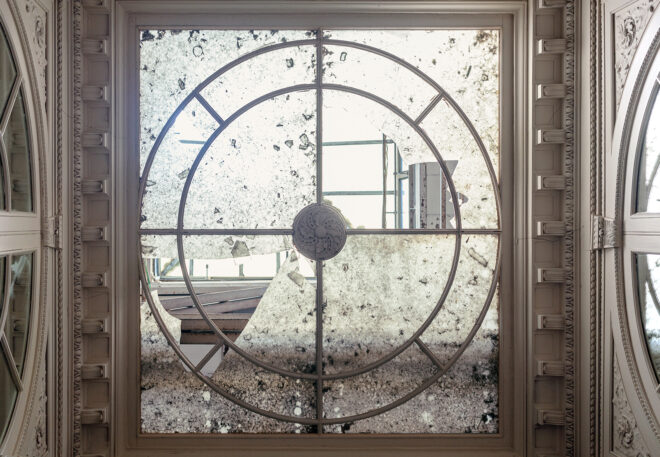 Lynnewood Hall was included in the Historic American Buildings Survey, but that documentation does not confer any protections. “We’re working on a National Register [of Historic Places] nomination,” noted Jennifer Robinson, another board member and the director of preservation services for the Preservation Alliance for Greater Philadelphia. “That would come into play if a purchaser wanted to use historic tax credits to preserve.”

The group is taking a long view of their project. Robinson compares it to the lengthy timeframe used in the preservation and reinvention of Eastern State Penitentiary, envisioning a phased plan that would include educational preservation programs at the outset for the building trades, historic preservation students, and others. She thinks this type of programming could exist alongside other uses for portions of the mansion like small offices or a hotel. 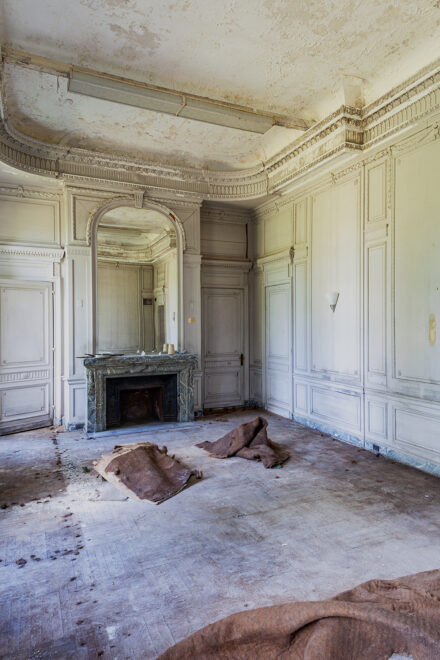 Given these long-range plans and the generally solid physical state of the property, the group is preparing for a decades-long process. But they are not the only ones eyeing the estate’s potential. The group said the owner, Richard Yoon, told them he has been notified by Cheltenham Township that he needs to secure a buyer or they will use eminent domain to seize the property. Recently, the township’s Facilities Committee held a meeting to inform the public of an urgent need to overhaul their municipal buildings, stating that the remedies could include renovation of the current location or finding a new building.

In 2017, the township made several changes to its zoning code, including a new category, MU3 – Mixed Use District. According to its website, the updated code “represents the most significant zoning change for the affected properties, is intended for adaptive reuse (the former estates of Elkins Estate and Lynnewood Hall) and ‘new town mixed use’ developments. It incorporates detailed standards for building and street design, public space design, historic preservation standards for select parcels, sustainability bonuses, etc.” In a municipality as developed as Cheltenham Township, these new permitted uses could make Lynnewood Hall’s 33 acres highly desirable. 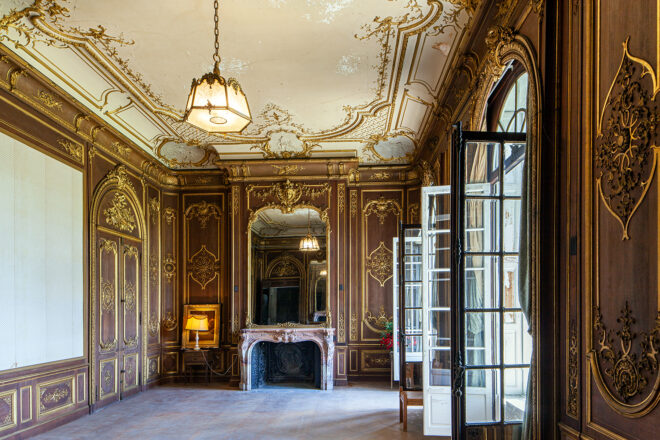 These events have put the Lynnewood Hall Preservation Foundation on alert, fearing eminent domain might lead to a destructive and undesirable reuse, from a historic preservation standpoint, or even demolition.

“One of our goals is to get people back to the site,” Greg Denesevich noted. “The Wideners used to open the house to the public to see the art.” Angie van Scyoc agreed, explaining “We look to the past to inspire the future.”