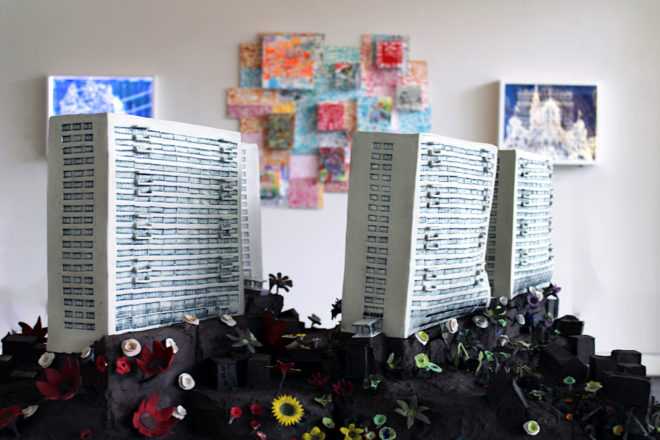 I can’t stop thinking about Jennifer Johnson’s Linger 1 and Linger 2. The pair of sculptural art installations that explore Philadelphia’s mid-century high-rise apartment buildings, are currently on display at Park Towne Place Apartment Homes. If you look at the Hidden City masthead, you will see the following themes in bold: Preservation, Architecture, Urbanism, Art & Design, Development, City Life, History. Johnson’s new work delves into each of these themes and is, essentially, a series of Hidden City articles realized in three dimensions.

You may be wondering why there is an art installation in an apartment building. Befitting a residence situated in walking distance to major museums, the four Park Towne Place towers are home to a vibrant art program. AIR Communities, the buildings’ owner, collaborates with InLiquid, a non-profit organization that creates opportunities and exposure for visual artists in the Philadelphia area. The AIR-InLiquid partnership seeks to integrate Park Towne Place into the Benjamin Franklin Parkway museum district by bringing an impressive permanent collection, temporary exhibits, and artist workshops to the apartment complex.

Park Towne Place’s association with InLiquid is one of the many amenities, along with a sleek gym, a clubby bar area, an on-site market, and a gorgeous pool that attracts residents to the recently renovated property. Fortunately for aficionados of mid-century architecture, Park Towne Place was added to the National Register of Historic Places in 2011. Thus, the recent upgrades are mainly within individual apartment units. The tan brick and white marble exteriors, ornamented simply with two vertical runs of balconies on each building, as well as the two-story lobbies, remain intact. Three of the four lobbies still have their original terrazzo floors. 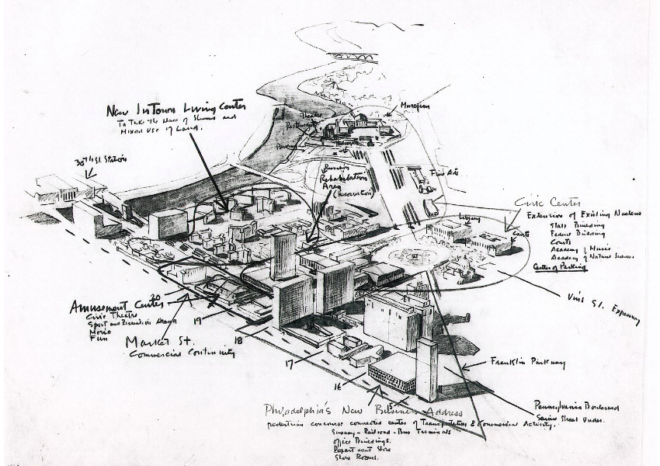 An aerial perspective sketch by Louis Kahn of his unrealized vision for the Triangle Redevelopment Project. | Image courtesy of Architectural Archives, University of Pennsylvania via The Athenaeum of Philadelphia

Park Towne Place’s history includes marquee names in the annals of modern architecture and city planning. Louis Kahn is credited with the first sketches of four residential towers on the Benjamin Franklin Parkway. He based his ideas on Le Corbusier’s Unite D’habitation concept of large housing complexes punctuated by green spaces. Kahn, influenced by the Congrès Internationaux d’Architecture Moderne notion of dividing cities into functional regions, envisioned this apartment complex as a dramatic improvement to the northern part of a decaying region of the city called the North Triangle Redevelopment Area.

Bounded by Market Street west of City Hall, the Parkway, and the Schuylkill River, the area was once full of abandoned warehouses, obsolete industrial sites, and the small worksites and rowhouses of a shrinking Polish-American community. The so-called Chinese Wall, the Pennsylvania Railroad viaduct that continued from the rear of Frank Furness’s Broad Street Station up multiple blocks of the west Market Street corridor, was particularly problematic. 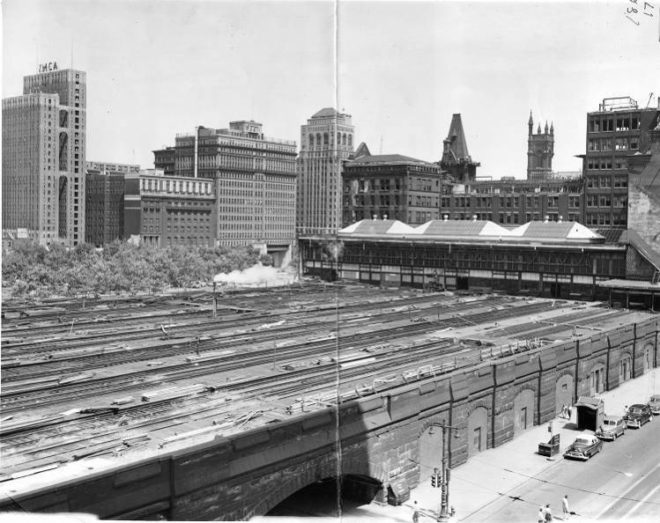 A version of Kahn’s idea was included in the Better Philadelphia Exhibition, a 1947 event hosted at Gimbel’s Department Store and coordinated by city planner Edmund Bacon and architect Oscar Stonorov. The organizers recognized that to compete with the burgeoning suburbs, Center City would need to be substantially transformed. When Ed Bacon became executive director of the City Planning Commission two years later, this ambitious vision of a revived downtown, divided into zones per the CIAM protocol, gained momentum. 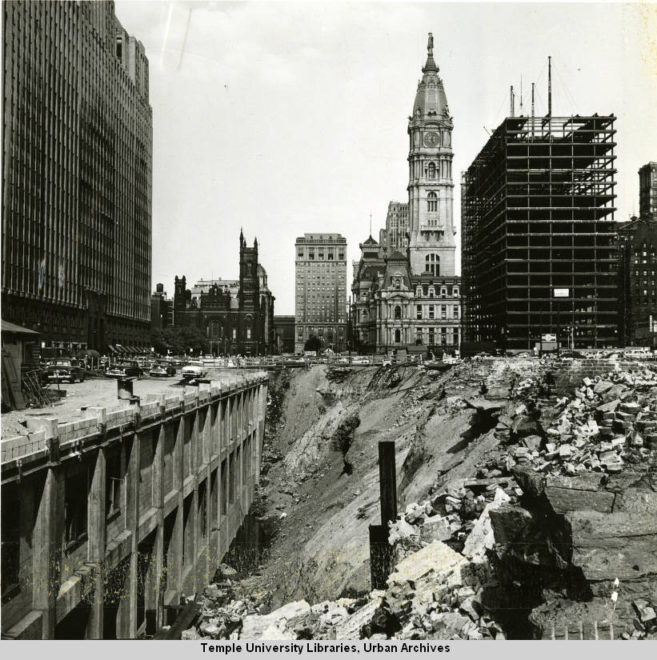 In 1954, Broad Street Station and the Chinese Wall were demolished, clearing the way for the development of Penn Center along Market Street, one of Bacon’s signature projects. The Vine Street Expressway, another innovation favored by Bacon and displayed at the Better Philadelphia Exhibition, was conceived as a way of dividing the Penn Center business zone from the Park Towne Place residential area. Although not completed until 1991, by 1957 the initial portion of the Vine Street Expressway provided a southern boundary for the residential tower complex.

Philadelphia developers Bernard Weinberg and Harry Madway formed the Park Triangle Corporation and took control of the parcel on which they planned to construct Park Towne Place. The Housing and Home Finance Administration provided loan guarantees, the first time that the federal government offered financing to a private builder rather than to a public housing agency in a “blighted or slum area.” This was also the first time the federal government guaranteed loans based on the future value rather than the current value of a decayed urban locale. Similar federal support was crucial in the realization of two more Bacon urban renewal projects: I.M. Pei’s Society Hill Towers and Oscar Stonorov’s Hopkinson House. 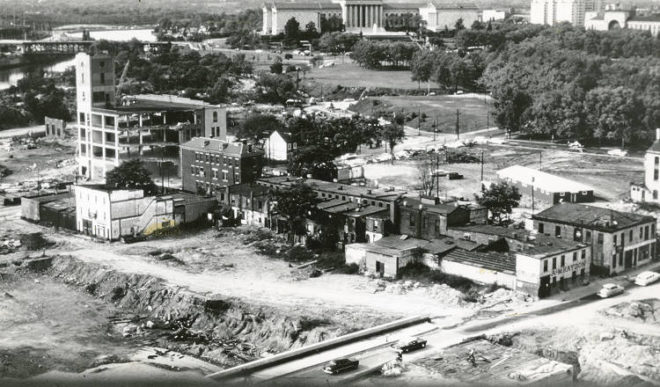 Construction, at left, of Park Towne Place’s first tower as demolition of the North Triangle Redevelopment Area continues in 1958. The Philadelphia Museum of Art can be seen in the background. | Photo courtesy of Temple University Libraries, Special Collections Research Center

Philadelphia architect Milton Schwartz was hired to design and build the Park Towne Place towers due to his proven track record of quickly erecting reinforced concrete high-rises. By the time the land was acquired for Park Towne Place, only about one hundred residents remained in what had been a working class Polish-American enclave. Most of the inhabitants, as well as St. Hedwig’s Church, were given compensation and relocated to the northern side of the Parkway in Fairmount. This eradication of a dwindling community stands in contrast with the slum clearance that displaced huge numbers of Black people in places like North and West Philadelphia during a similar period.

The construction of Park Towne Place, including demolition of the remaining buildings, began in 1957 and was finished in 1959. Since the first residents moved in, the footprint and exterior of the towers has remained essentially unchanged. 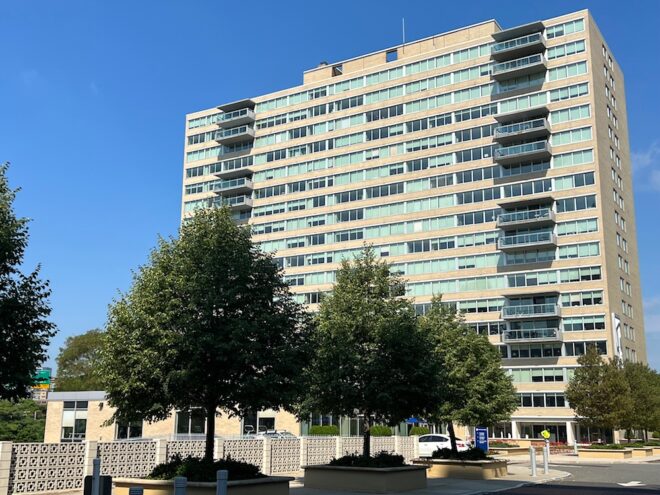 One of four residential towers that make up Park Towne Place. The mid-century complex, completed in 1959 and designed by Philadelphia firm Milton Schwartz & Associates, was added to the National Register of Historic Places in 2011. | Photo: Michael Bixler

Remarkably, Jennifer Johnson’s Linger 1, includes foot-high recreations of the four towers rendered in porcelain and tinted to match Park Towne Place’s limestone exterior. All 8,000 windows and each balcony are included in meticulously detailed miniature. The four delicate towers are situated atop a garden of unglazed brown clay and bright ceramic flowers. The brown clay is molded to show the homes, churches, brickyards, and factories that comprised the neighborhood prior to its demolition. Johnson did extensive research about the history of the site using tools such as GeoHistory.org and PhillyHistory.org.

The flowers, in addition to being a Johnson trademark, convey a major theme of Linger. Cities, like flowers, are by nature impermanent. Park Towne Place sits on top of a lost neighborhood. What sits below that erstwhile community? And, more crucially, what will sit atop Park Towne Place some day in the future? Look carefully and you will notice that Johnson’s towers are sliding, ever so subtly, into the muck of the demolished neighborhood.

Adjacent to Linger 1 sits Linger 2 is another installation of a similar size. This piece includes a smaller porcelain replica of Park Towne Place as well as recreations of two other Bacon-era projects that remain visible in the current landscape: Society Hill Towers, built in 1964, and high-rises at the University of Pennsylvania (Penn), built in 1970. Additionally, Johnson has made miniature versions of other mid-century high-rises placed in accurate geographical relation to each other. These include Mantua Hall at 36th Street and Fairmount Avenue (1961-2008), Blumberg Towers at 23rd and Jefferson Streets (1966-2016), the Louis Kahn-designed Mill Creek at 46th Street and Fairmount Avenue (1955-2002), and Southwark at 4th Street and Washington Avenue (1963-2000). Although all these residential high-rises recreated for Linger 2 were constructed in the same era, only Park Towne Place, Society Hill Towers, and the high-rises at Penn still stand. The others have been demolished. In other words, the three residences that have primarily housed affluent white people remain. Those that were home to mostly impoverished Black people are gone. 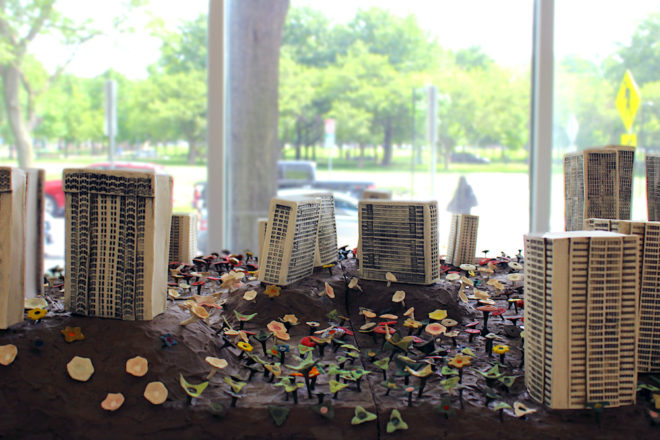 Jennifer Johnson’s sculpture Linger 2 shows Society Hill Towers and high-rises at the University of Pennsylvania, which are still standing, as well as Mantua Hall, Blumberg Towers, Mill Creek, and Southwark, all of which have been demolished. | Photo: Abbe Foreman Photography

A plethora of small ceramic flowers convey a deeper message. The flowers in Linger 2 are color-coded to coincide with the 1934 Brewer map which demarcated areas populated by three undesirable groups: Jews, Blacks, and Italians. There is not a tight correlation between these color-coded areas and whether mid-century residential towers have survived or been demolished. Nonetheless, the redlining that shaped the city’s post-World War II development has certainly affected the city’s appearance, demographics, transportation networks, economic development, patterns of residential segregation, and much more. As we live through another era of major transformation of our city, Johnson’s work asks us to contemplate the complex forces that determine what shape the future Philadelphia will take.

Johnson explained her motivation for creating Linger 1 and Linger 2. “Right now, I have a slight feeling of panic as I travel around Philadelphia, sometimes not knowing where I am anymore. How do we make sense out of this feeling and the way our city is morphing, at different spots, into a place we barely recognize?” Although we cannot know what our rapidly changing city will look like in the future, Johnson’s work gives us the opportunity to ponder the possibilities with fresh insights and from different historical perspectives.

Jennifer Johnson’s Linger 1 and Linger 2 are part of InLiquid’s exhibition, You Are Here, on view at Park Towne Place now until October 2022. For hours of operation and access see: https://inliquid.org/exhibitions/you-are-here/

The artist will give a talk at Park Towne Place on Wednesday, July 20, 2022. Register here: https://www.eventbrite.com/e/artist-talk-with-jennifer-johnson-tickets-371269315517