Unearthing an Enigma in Washington Square 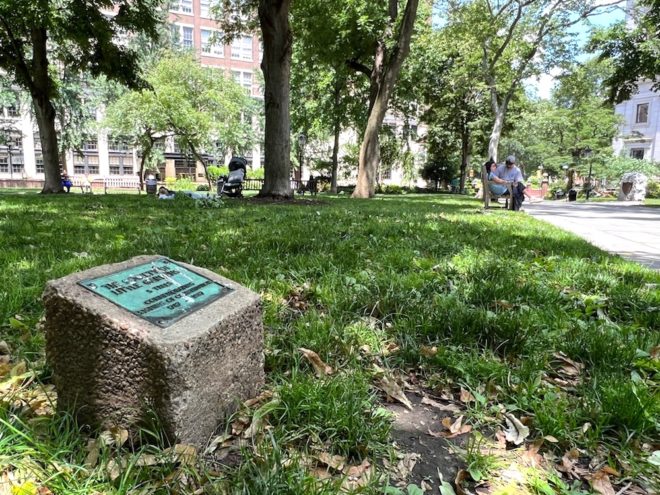 This tiny plaque in Washington Square is easy to overlook and hard to find. It was placed by The Society of Little Gardens of Philadelphia in the 1930s. | Photo: Michael Bixler

Washington Square’s history and monuments mostly herald the war for independence, from the Tomb of the Unknown Revolutionary War Soldier to the renaming the original park, Southeastern Square, after the country’s first president.

However, there is a small, modest plaque surrounded by a line of trees—two basswoods, a honey locust, a swamp white oak, and a scholar tree–which reads “The Society of Little Gardens of Philadelphia, 5 trees commemorating signing of Constitution, 1787-1937.” The name came from the society’s purpose as envisioned by its founders. They were women who had established another organization, the Acorn Club, in 1889 to promote “literary, musical, and artistic tastes.” To celebrate the Acorn Club’s 25th anniversary in 1913, several founding members decided to start a philanthropic garden club. 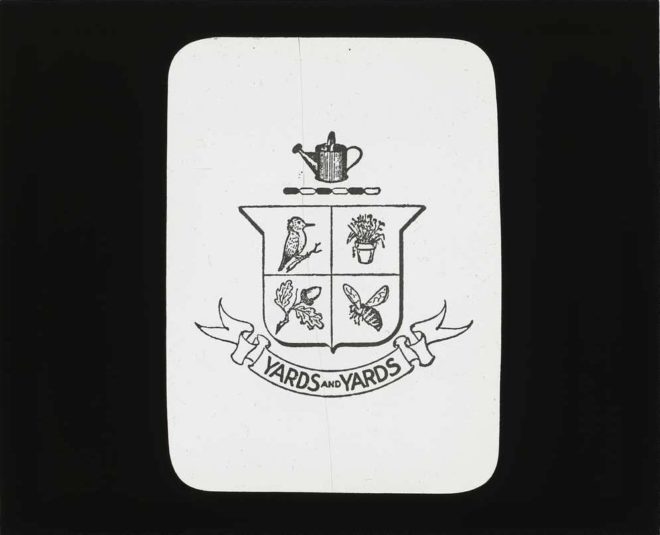 The insignia of The Society of Little Gardens of Philadelphia was designed by E.W. Lowber who founded the organization to promote and support street planting and public gardens in the city. | Image Public Domain

At that time, “banks, stores, gasoline stations, and office buildings did not plant flowers, trees, or shrubs on their grounds or even in large containers,” wrote Eleanor Ward Altemus, The Society of Little Gardens’ (SLGP) president from 1967 until 1970, in A Brief History of the Society of Little Gardens, a small book she self-published in 1996. “Most of the flowers in Center City Philadelphia were behind garden walls, so were invisible to the passerby.”

The new club aimed to encourage gardening in public places by donating window boxes, seeds and plants, and sponsor garden days “where people would open their gardens to the public to give people the opportunity to enjoy a garden.”

A view of the reflection pool and visitors of the Rittenhouse Square Flower Market in 1932. | Image courtesy of the Pennsylvania Horticultural Society

The members raised funds for their charitable work in various ways. They ran a stall at the annual Rittenhouse Square Flower Market from its beginning in 1914 and every year since according to Altemus’s 1996 book.

Projects ranged from gifts of gardening supplies to individuals and support to charitable organizations. A notable recipient was the Workman Place Neighborhood House at 756 South Front Street, to which the SLGP donated supplies and salary in support of a children’s afternoon gardening club in the 1930s.

Dating back to the early 19th century, the complex was a group of tenement houses arranged around a courtyard and built for John Workman, a lumber merchant. During the period of the SLGP’s support, it was owned and managed by the Octavia Hill Association (OHA) to provide safe and affordable housing for working class residents. OHA is now a property management company and still owns the Workman Place units. 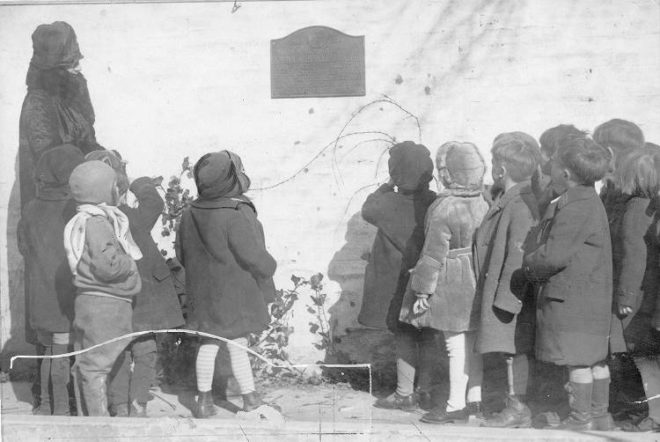 In 1976, The Athenaeum of Philadelphia asked the SLGP to plant and tend the garden behind their building on Washington Square. The Philadelphia Fountain Society donated a wrought iron fountain for the project. Both groups are commemorated by a bronze plaque in the garden.

According to Altemus, the garden design was the work of George B. Tatum, an architectural historian who had a special interest in the history of gardens and had also chaired the advisory board of the Historic American Building Survey. While the plaque remains, the garden today consists only of large wisteria vines snaking along one wall, a large tree (possibly a cottonwood), two large iron urns, and a lot of pachysandra and ivy covering the ground. 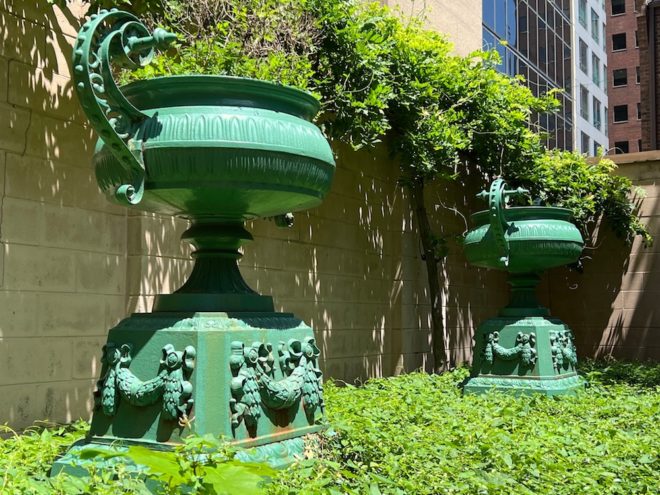 Two iron urns decorate a small side garden behind the Athenaeum of Philadelphia. | Photo: Michael Bixler

While it records some aspects of the SLGP’s history, Altemus’s book also voices the regret that they neglected to more thoroughly document their work. It doesn’t give many details about the club’s membership and activities in 1996, the time of her writing. Like other lost facets of Philadelphia history, we are left to wonder what happened to them.

Perhaps it was simply that times change. As one librarian at the Pennsylvania Horticultural Society noted, “They were a garden club much like the many other garden clubs in the area, run by energetic civic-minded women who were products of the Progressive Era.”

A selection of garden photographs taken across the city between 1930-39 by The Society of Little Gardens. All images courtesy of the Pennsylvania Horticultural Society. 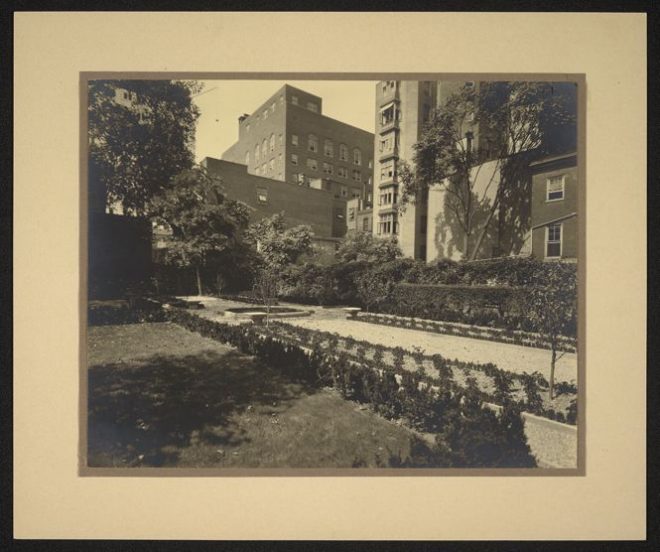 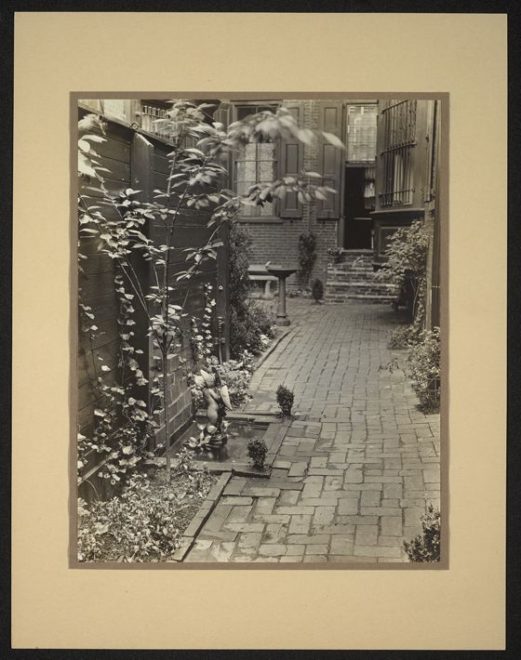 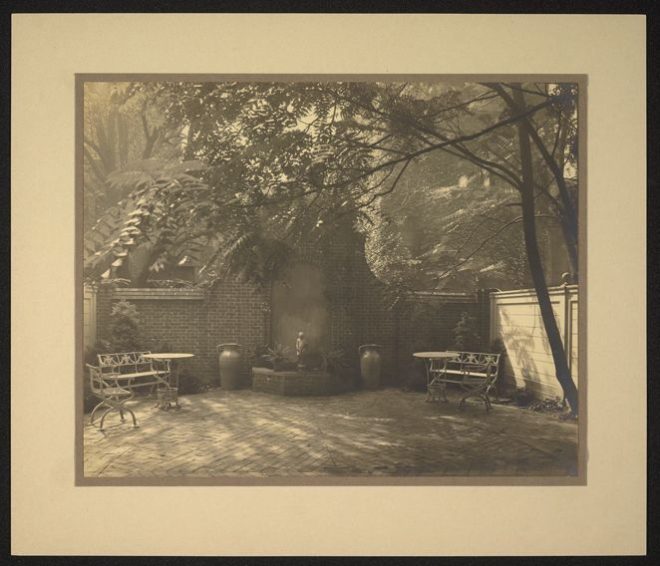 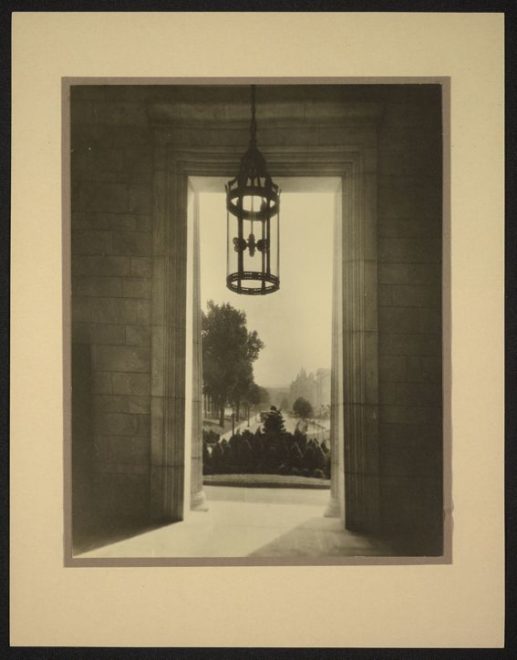 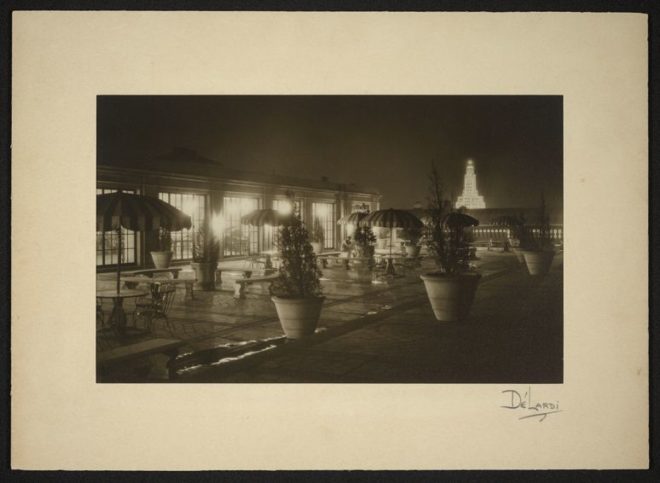 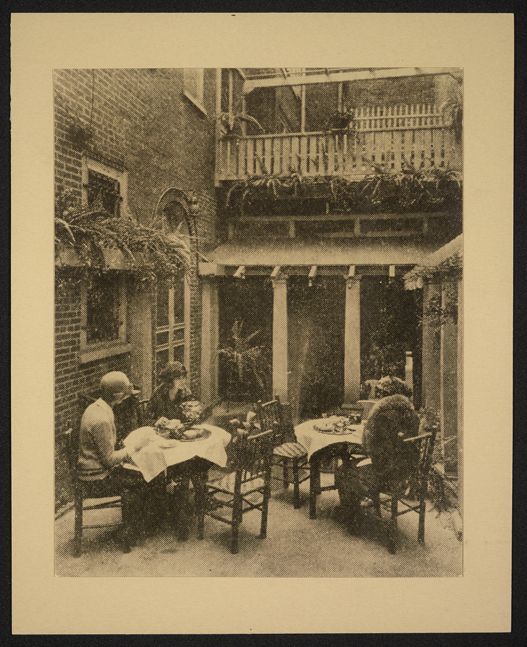 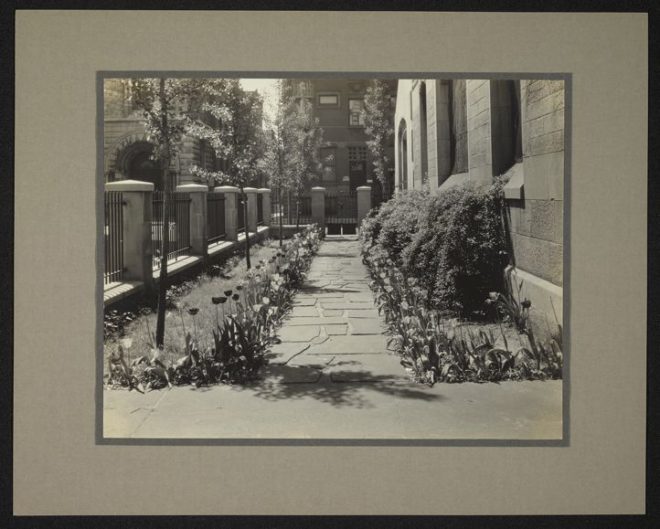 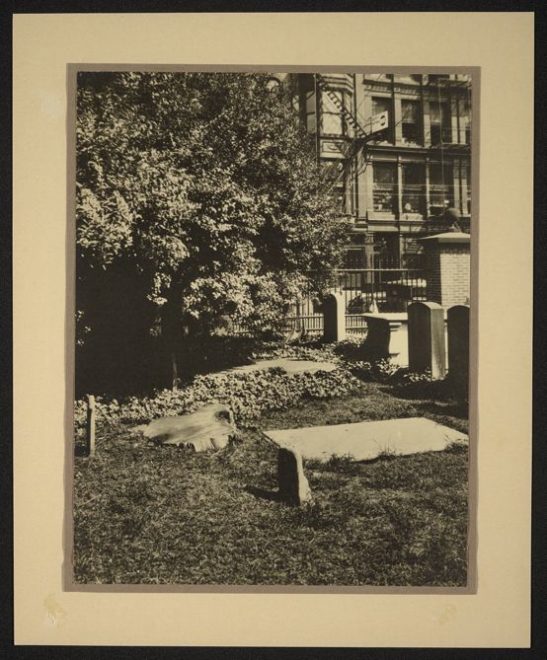 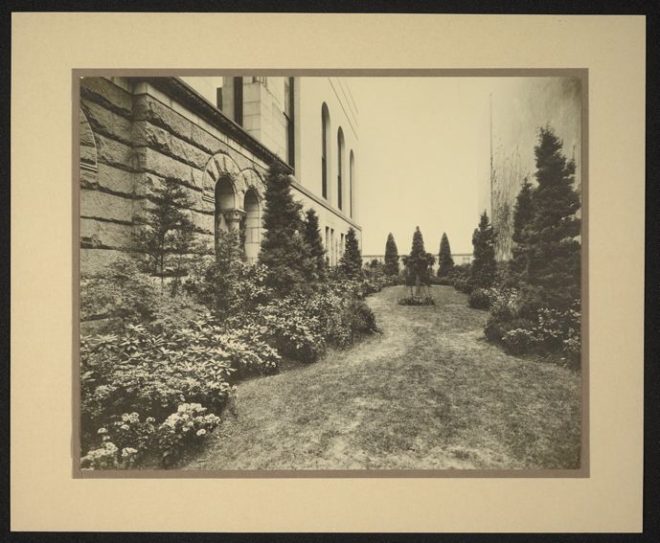 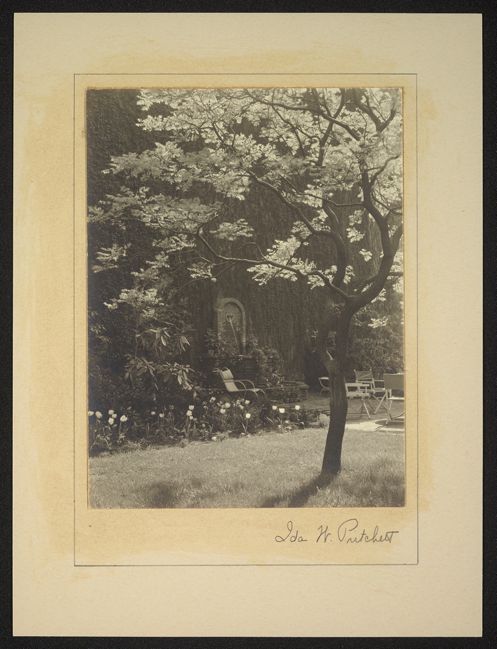 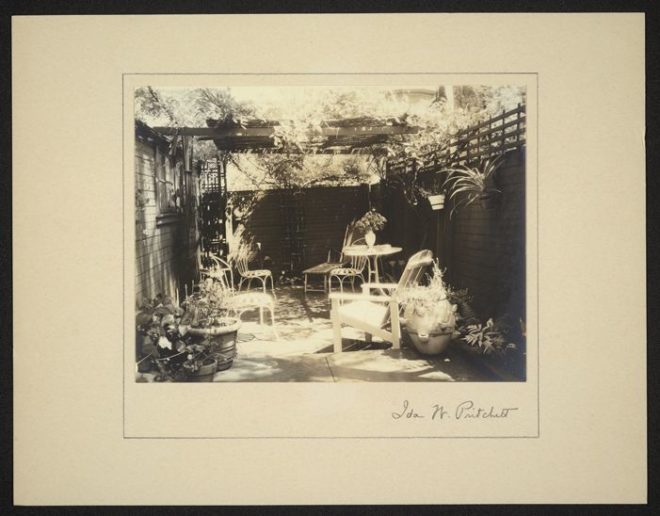 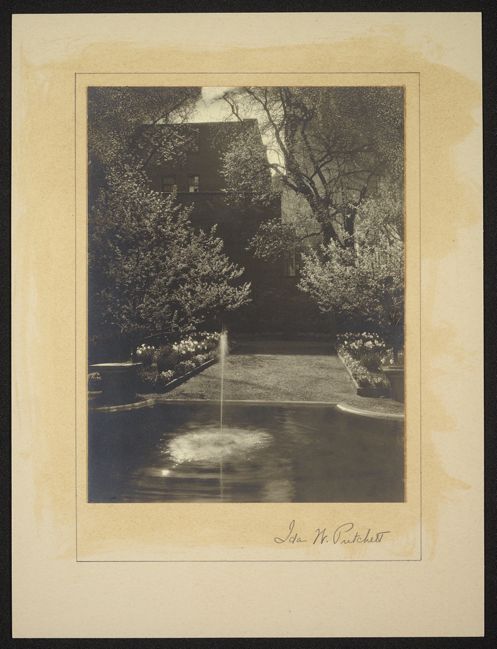 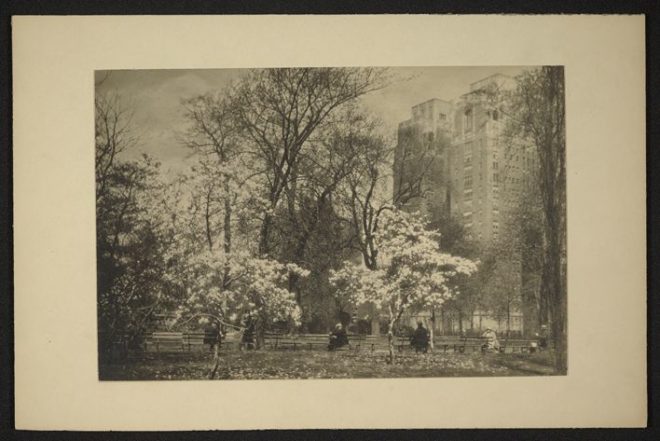 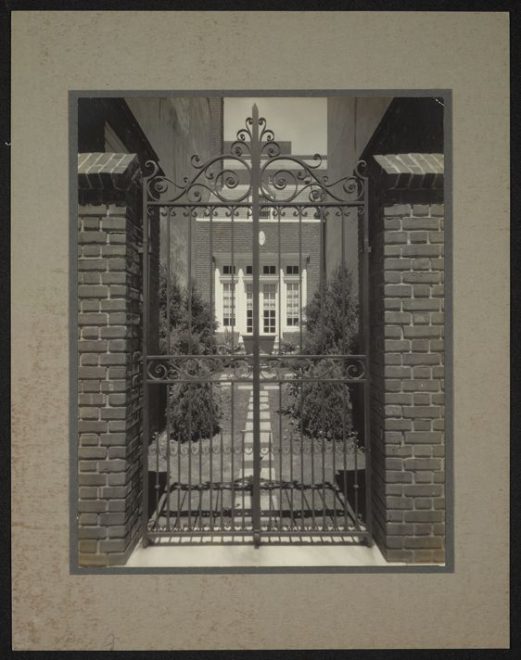 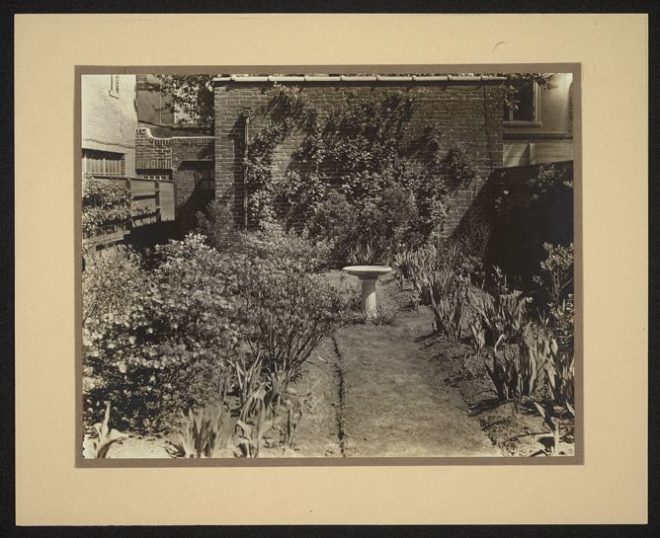 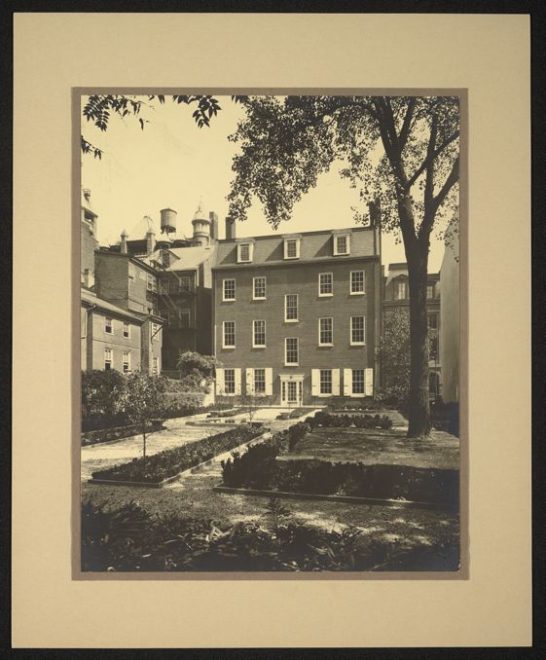 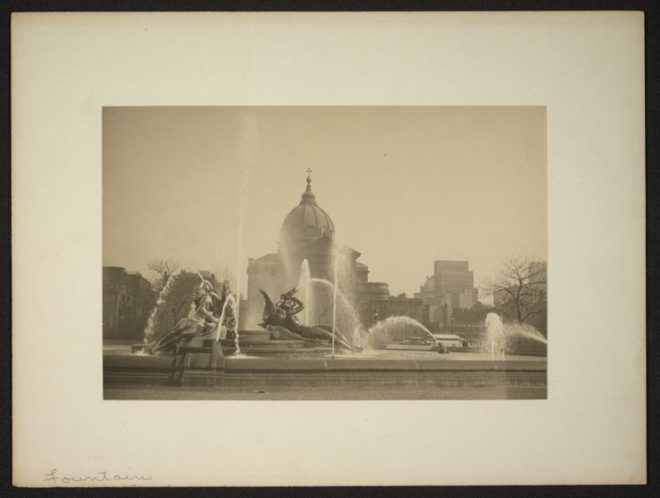