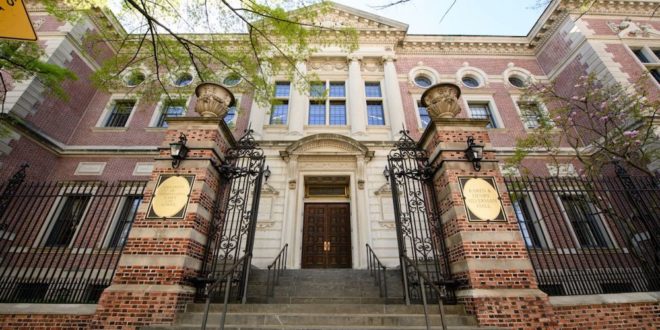 Getting into any law school isn’t easy. Getting into the University of Pennsylvania’s Carey Law School can be a moonshot. So it stands to reason that students there had a lot to say about the renovation of three classrooms in Silverman Hall, the jewel of Penn’s law school campus, by Philadelphia firm Voith & Mactavish Architects.

“When I asked students if they wanted their classrooms to be modern or historic, they responded unanimously,” said lead architect Daniela Holt Voith, a founding principal of the firm. “They said, ‘We work so hard to get into Penn Law. We want to feel important when we go to class.’ They wanted that sense of grandeur and importance.” 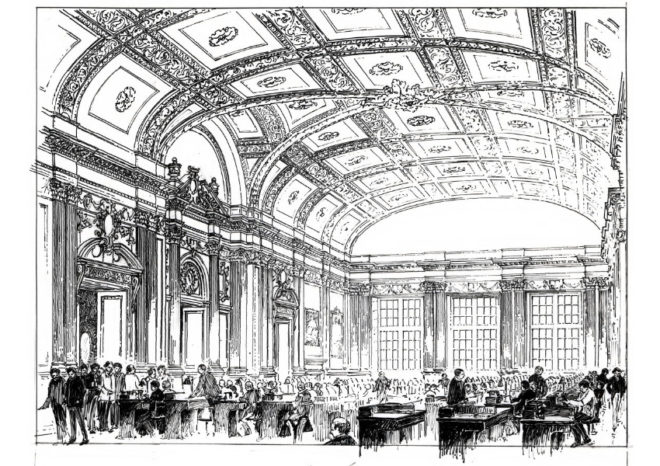 A rendering by architecture firm Cope & Stewardson circa 1890s of a classroom in Silverman Hall. | Image courtesy of the Athenaeum of Philadelphia via Architectural Archives, University of Pennsylvania

Silverman Hall, designed by Cope & Stewardson and built between 1891 and 1898 in the highly ornamented English Baroque style, has no shortage of grandeur. If you didn’t know it was a law school you would assume it was a royal abode. Known for their Gothic Collegiate flair, Walter Cope and John Stewardson had previously designed Bryn Mawr College in 1880 and were anointed as Penn’s architecture firm after university president Charles Curtis Harrison removed architect Frank Furness from that position. In addition to the law school, Cope & Stewardson designed Penn’s Quadrangle and Bennet Hall as well as the engineering school, medical school, dental school, english department, and veterinary school buildings.

“The law school wanted to make better use of these three spaces, which had last been renovated in the 1980s,” said Voith. The challenge was preserving and restoring the classroom’s fin de siecle details, while bringing it technologically into the 21st century. Voith, who had worked on similar projects at Rutgers, Vassar and Yale, was undaunted. “Our firm has an expertise in historic preservation and integrating technology into classrooms,” she said. 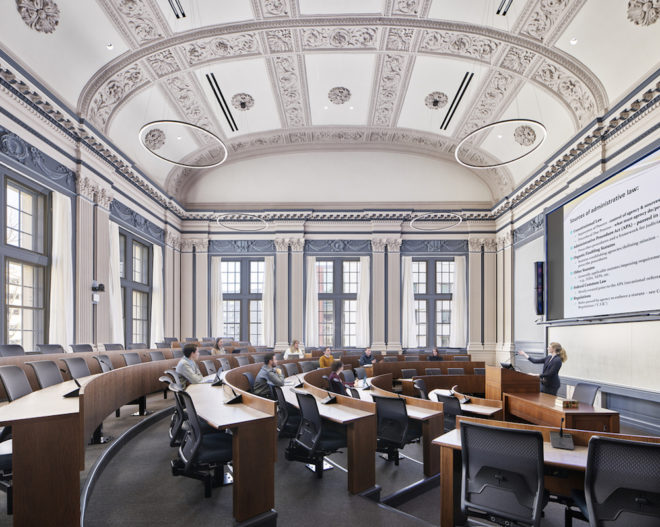 “We have a long partnership with the law school. 15 years ago, we were asked to do master planning work, outlining a number of projects for which we subsequently competed,” said Voith. “Silverman Hall was originally built with the library as its core. On its second floor it has three huge reading rooms and those rooms had been subdivided and made into classrooms. However, they had been outfitted with now-outdated fixed radial seating and were not conducive for teaching due to poor acoustics, bad lighting, heating, and outdated audio and visual equipment.”

Each of the three rooms were redesigned to meet the needs of the types of classes each supported. One room was given horseshoe-shape seating with two built-up tiered floors, which provides direct sight lines as well as fixed microphones to assist in both hearing and recording of classes. Another room was designed with six levels of tiered seating, which accommodates the more traditional case study-style classroom. The third classroom was outfitted with tables on castors and stackable chairs to maximize flexibility, allowing the room to serve as both a classroom as well as a breakout space for conferences and events. 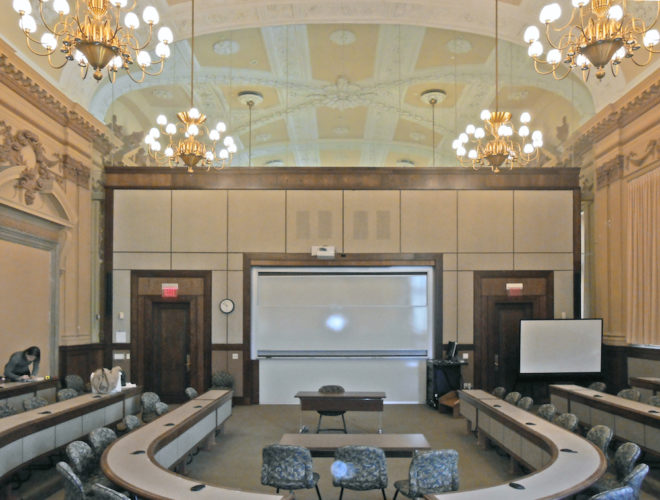 Before recent work, this classroom was last renovated in the 1980s. | Photo courtesy of Jeffrey Totaro for Voith & Mactavish Architects

One of the classrooms had been configured so that the door was behind the lectern. As a result, a student could only leave early by walking directly in front of their professor. Voith reconfigured the seating to improve the flow. She also replaced the existing audio-visual technology with the largest digital display on Penn’s campus that is so bright it doesn’t require windows to be covered, replacing black out curtains with sheers.

One major problem was the high-domed ceilings which caused sound to bounce like a pin ball machine. “In order to perform well, acoustically, we enlarged duct work in the walls to make less noise and replaced the ceiling with acoustic plaster,” said Voith. This meant removing the 19th century handcrafted plaster medallions and recasting and replacing them. One of the most interesting choices was replacing brass chandeliers with futuristic ring-shaped LED fixtures that are six feet in diameter. 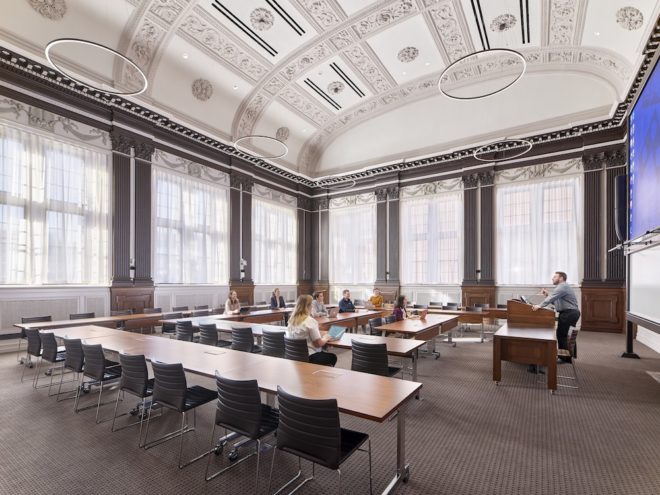 Another revamped and updated classroom was painted in cream and chocolate brown. | Photo courtesy of Jeffrey Totaro for Voith & Mactavish Architects

In the 1980s, one of the classrooms had been painted mustard yellow which Voith described as “pretty darn ugly.” To arrive at the right colors, Voith had renderings created of different color schemes to help the client make a decision. That resulted in two of the classrooms being cream-colored with a dusty blue trim and one classroom in cream with a deep chocolate trim. “The chocolate was in homage of the room’s original faux-bois finishes,” said Voith.