Author’s Note: Devil’s Pool in Wissahickon Valley Park has been a popular spot for sunbathing and swimming for centuries. In the past few decades the site has become the focus of much handwringing, endless Philadelphia Inquirer op-eds, neighborhood organizing, and trash pick-ups. Devil’s Pool is often described as suffering from overuse. During the summer of 2020, when public pools across the city closed due to the global outbreak of COVID-19, people flooded into the Wissahickon. The City briefly introduced “social distancing ambassadors” there and placed a ban on bringing food. City Councilmember Curtis Jones even announced his support of filling Devil’s Pool with gravel to end the trash problem and illegal swimming.

Although the number of visitors to Devil’s Pool and the Wissahickon have somewhat decreased since the height of the pandemic, the fight between neighbors, naturalists, and the thousands of people who use the area for leisure has continued. 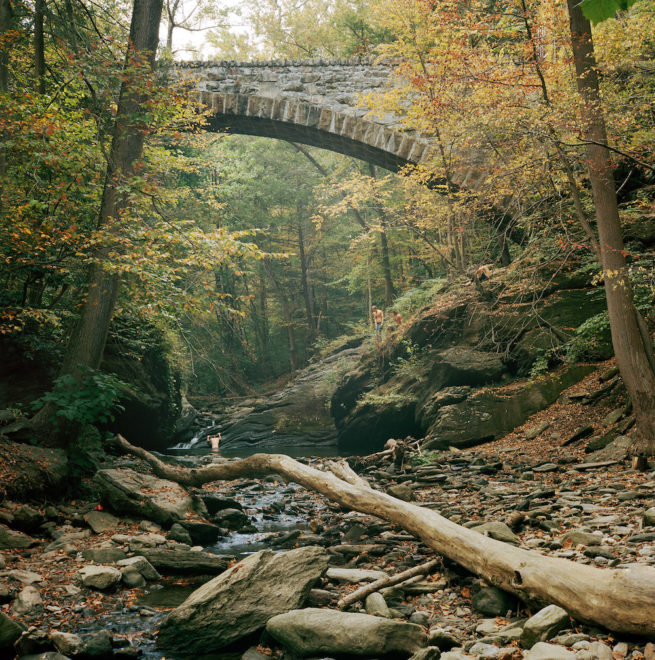 None of this contention and controversy is evident in Sarah Kaufman’s monograph of 60 photographs taken over the course of seven years at Devil’s Pool. The photographs sing in praise of summer, a lyrical call to enjoy it while it is here. The subjects of Kaufman’s photographs gossip, lounge, swim, leap, and kiss in celebration of this urban oasis. Although it is often erroneously described as a “hidden gem,” Devil’s Pool is one of the most popular and widely accessible natural spots in Philadelphia. Looking through Kaufman’s photographs, it is hard not to read a class analysis into the joyful pastime of all backgrounds depicted there.

On the first hot spring day this year I took a walk through the Wissahickon with Kaufman that ended at Devil’s Pool. There she talked about her childhood, the pool, and the process of making her book. This interview, in Kaufman’s words, has been edited for clarity. 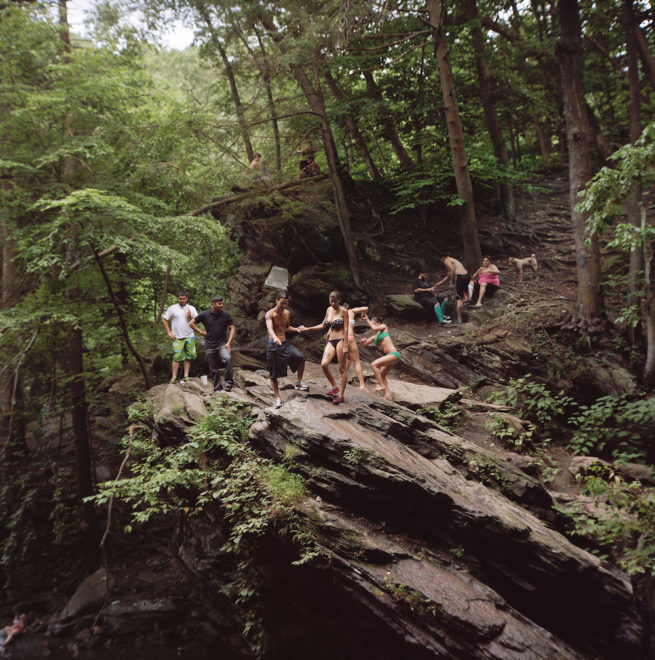 I grew up in Germantown on Knox Street. My parents moved to the suburbs against my will when I was in high school. I went to college, then grad school, then lived in Brooklyn for three years. When I was in New York I ended up commuting back to Philadelphia to teach as an adjunct at Ursinus College.

I really wanted to end up in Germantown and I did, about a mile and a half away from my childhood home. That is when I rediscovered the Wissahickon, which I’d grown up hiking in. I’d been back a few times, but it wasn’t the center of my world. Immediately after moving back to Germantown, I fell in love with it again. 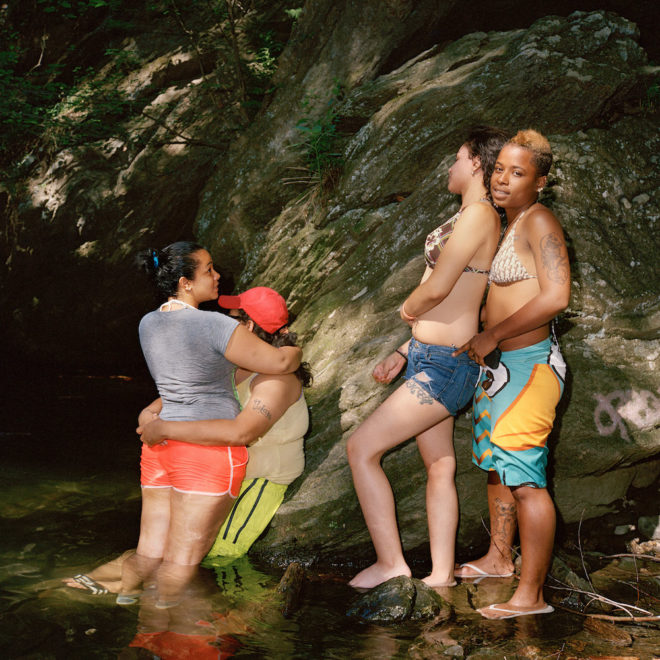 I was doing a different photography project at the time, but I would hike up and down the valley with my camera taking pictures of how people were engaging with the landscape. I didn’t really know why. My studiomate, who is also a photographer, kept pointing to the images I had made at Devil’s Pool saying, “This is what you love.”

The project I was working on before this was photographing mostly strangers in their homes and asking them to strip down their clothes and show me their daily routine that involves their bodies. I think that’s what drew me to Devil’s Pool. Clothes are stripped down. People are really in their skin, in space, engaging with the landscape and just being true in a way. I don’t think most people would want to pose naked or semi-naked for a camera in just any situation, but here it just feels right. You are in harmony with the landscape and it is so fundamentally human. 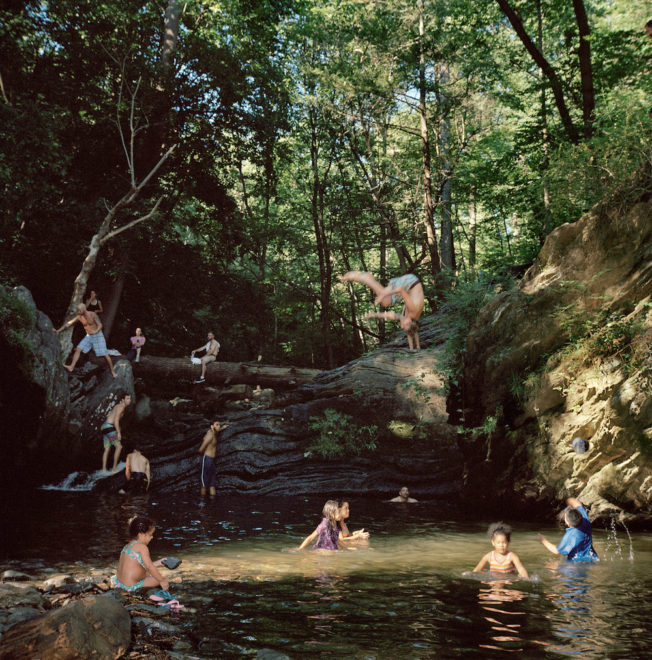 I use a Rolleiflex medium format film camera. It is very slow. I only get 12 negatives per roll, and there is a lot of switching film. I would come to Devil’s Pool and just hang out and take in the scene for a while. Then I would get my camera ready and start wandering around and talking to people. I always asked If I could photograph them, even if it’s just getting eye contact or a gesture from far away.

It was important to me to be with the scene, to feel like I am part of the place and what is going on. At the height of the project I was here every weekend in the summer and maybe one weekday in the middle. The repeated visits were really interesting to me because every time it was a different scene, different music, and a different smell. It really felt like it was always rotating. Devil’s Pool almost feels like a theater to me, with the hikers coming through, seeing it as a scene, and passing on. There were always separate groups of people that appear from different neighborhoods and different worlds, but they all seemed to interact with one another. I once met a group of 12-year-old boys who had ridden their BMX bicycles to Devil’s Pool all the way from Gray’s Ferry. 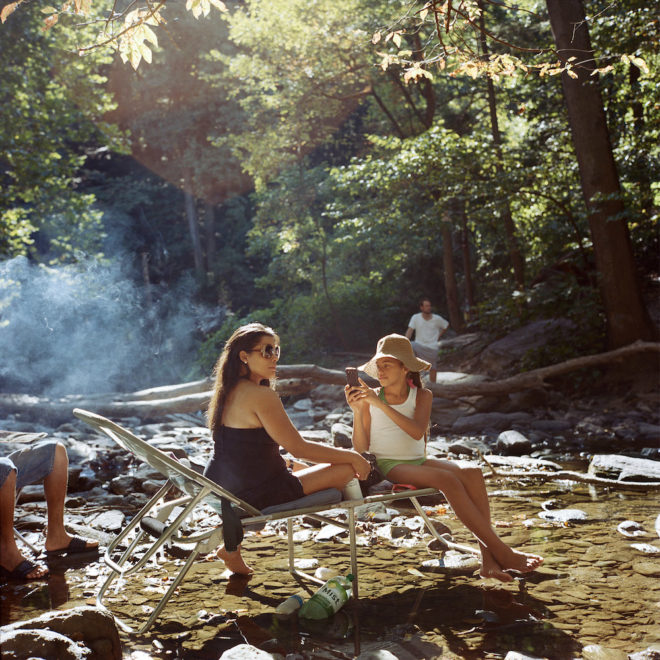 There is this very communal cheering on of the jumpers. In one image in the book someone is jumping from the bridge over Devil’s Pool that I took on a July 4th weekend. I counted how many people there were right before the moment. It was about 120. Folks were screaming at this guy, “No, don’t do it!” or “You’re going to kill yourself!” Then there were others cheering him on. It was this clash of what people wanted from it. When he finally jumped everyone just stopped, dead silent, to watch. He came up from the water and everybody cheered.

The jumping at Devil’s Pool is an interesting release. There is visceral fear. You don’t know exactly what is going to happen. No matter how high you are jumping from, even if it is not that high, it’s like, “What is under the water?” It’s mysterious, it’s dark, and then you emerge again. 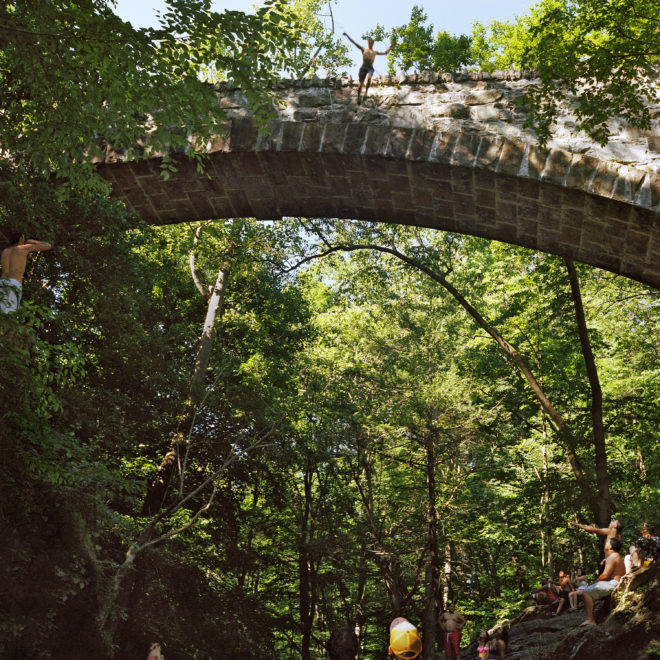 This project was seven years of shooting there, so I took thousands of photographs. I would look at them as 5×5 prints, sift through, and reject a whole bunch. I did that a couple times. Three years before the book was finished I looked at what I had and got a sense of what else I wanted or needed to round it out in different ways.

Towards the end, I started looking more at making classic portraits, engaging one on one with the person. What initially captured me were these little figures draped across the landscape, really romantically. Other kinds of photos were always happening too, but I wasn’t as conscious of them. Group portraits were also really interesting to me. 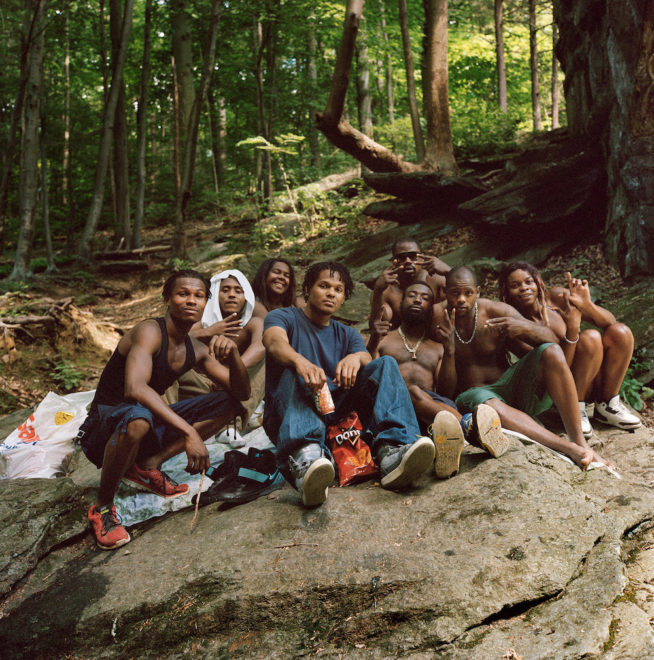 It took six months to get the sequence of the photos right. Once I decided that these 60-ish photographs were the ones, then how do I structure the sequence? That was really a fun process, and it helped me realize that I had finished a project. The photographing was done, and I could play with what I had and come up with.

Growing up in Germantown, it was really violent in my neighborhood. I knew people who had terrible things happen to them. I think maybe looking back and putting it all together, I revisited Devil’s Pool because it is a place in the city where people feel safe. It is a communal escape from the often dangerous and unpredictable nature of living in Philadelphia. I’m not a sociologist so I don’t want to say too much about that kind of thing. But, on a personal level, I think my work relates to that. 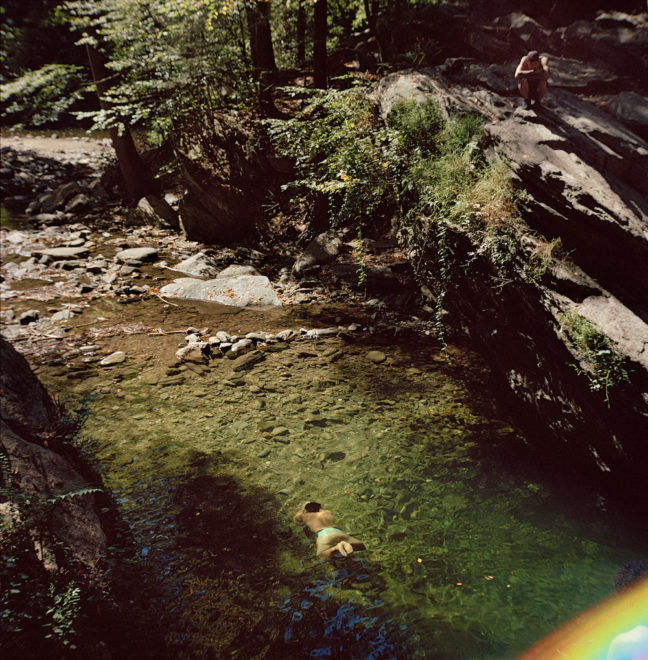 I have new ideas percolating about work that captures the visceral moments of connection within the city’s landscape that may begin in the Wissihickon. I don’t know yet, but I think I am going to start out by coming back to Devil’s Pool with my camera and see what it generates.