Construction of Philadelphia’s passenger subway system was a vast undertaking over many years that defined the city’s direction of growth. The Market-Frankford Line opening in 1905 drove residential development in West Philadelphia and the Northeast while department store development blossomed on Market Street. The Broad Street Subway, completed in 1928, likewise created access to Olney and Oak Lane. Projects of such enormity must have seemed to Philadelphians at the time to rival the Egyptian Pyramids of Giza. These efforts followed a massive excavation project that few recognize today: the creation of the Pennsylvania Avenue Subway. 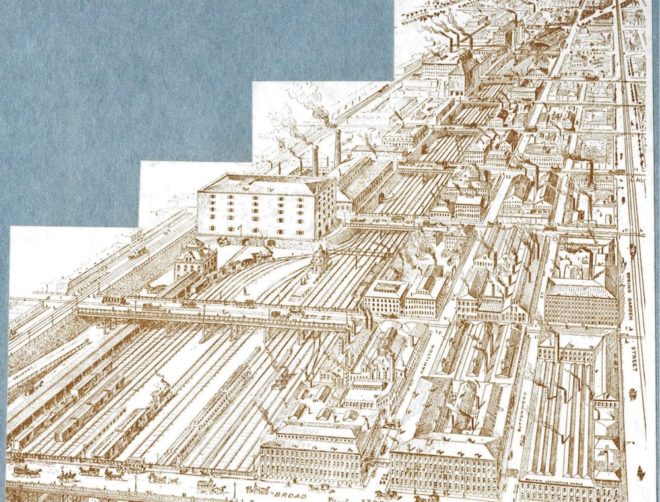 A concept drawing of the Big Dig, looking west from Broad Street between Callowhill and Spring Garden Streets. It depicts the 50-acre industrial zone known as Bush Hill, named after an early William Penn estate. Matthias Baldwin established his locomotive factory here beginning in 1834. His company built loft buildings on 16 acres which can be seen in the lower right hand corner of the drawing. Note the presence of a passenger train on the tracks with the City Branch leading to Reading Terminal. A nearby station was located at 31st Street and Girard Avenue in Brewerytown. This excavation project proceeded without interrupting either freight or passenger service. | Image courtesy of Print and Picture Collection, Free Library of Philadelphia.

The project, undertaken between 1894 and 1900, separated the grades of railroad tracks running east-west north of Callowhill Street from the grades of city streets running north-south between 12th and 21st Streets, with the tracks lowered and the streets reconstructed on bridges above them. The Reading Railway, owner of the tracks, was responsible for the excavation of over one million cubic yards of material, while the city undertook the street reconstruction. 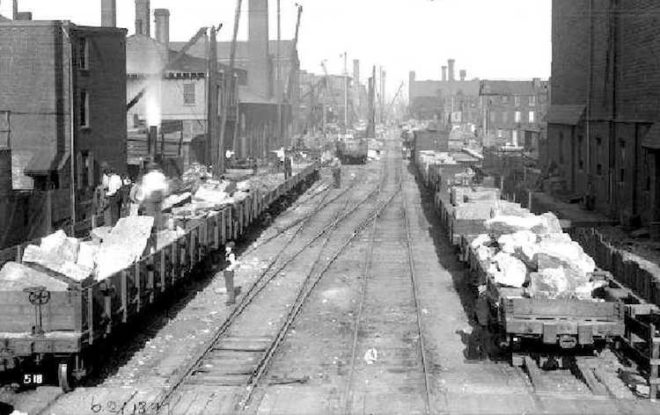 The City Branch line in 1894. The photo shows Pennsylvania Avenue, looking east from 20th Street, before construction of the subway. | Photo: Pubic Domain

There is little evidence today of the vast railroad network that existed between Callowhill and Spring Garden Streets and between the Schuylkill and Delaware Rivers. However, in the 19th century this area–called Bush Hill west of Broad Street and Northern Liberties east of it–was the dynamic center of Philadelphia’s industry when the city was earning its reputation as the “Workshop of the World.”  This rail network had begun as a canal linking the two rivers, but the enterprise, having failed, was acquired for a railroad right-of-way known as the Delaware and Schuylkill Railroad. The City of Philadelphia’s port interests, facing overwhelming competition from New York’s recently opened Erie Canal, had convinced the Commonwealth of Pennsylvania to build the Main Line of Public Works extending from Philadelphia to Pittsburgh and having a terminus at Broad and Vine Streets.  The “Main Line” opened for business in 1834. East of the Schuylkill River, the Main Line used the Delaware and Schuylkill Railroad between the Columbia Bridge and Broad Street for access. In gratitude to state government, the City named the rail line Pennsylvania Avenue. A small railroad, the Northern Liberties and Penn Township Rail Road, linked Broad Street east to docks on the Delaware River from the Main Line depot, using the beds of Willow Street and Noble Street. The Commonwealth eventually grew tired of the railroad transportation business and sold its interests, eventually acquired by the Reading Railroad, which also bought out the Northern Liberties Railroad. 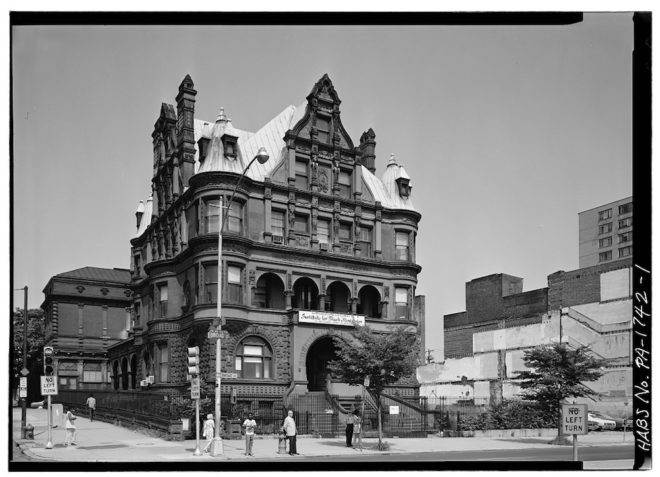 The Peter A. B. Widener House at 1200 North Broad Street. Date unknown. The Gilded Age mansion was destroyed by a fire in 1980. | Image courtesy of Historic American Buildings Survey, Library of Congress.

This rail line between the two rivers was successful, perhaps too successful for the city, as it created a major impediment for north-south highway traffic attempting to cross it at grade. The line particularly drew the ire of two real estate investors, Peter A.B. Widener and William Elkins, both of whom had designs on the open fields of North Philadelphia.

Locals have long taken pride in the fact that Philadelphia began as a planned city with copies of Thomas Holmes’ original plan decorating many households. Philadelphians had come together to plan a new site for a replacement for City Hall after the 1854 city-county consolidation. The volunteer planners regrouped for the city’s 1864 Sanitary Fair and the 1876 Centennial Exhibition. Philadelphians welcomed Widener’s suggestion that the planning committee regroup and address the railroad bottleneck on Broad Street. 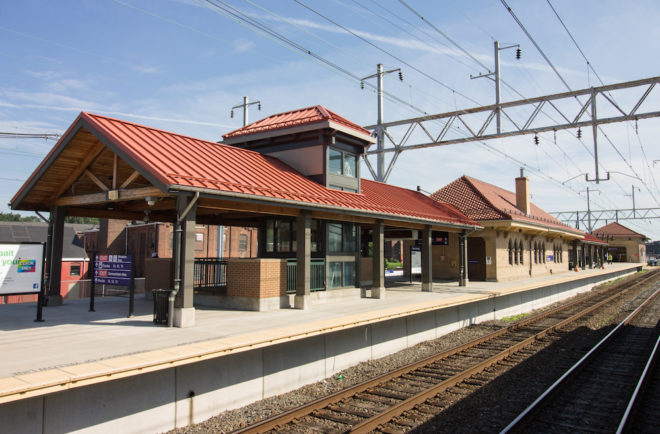 Wayne Junction Station shortly after it was renovated and modernized in 2018. | Photo: Michael Bixler

The committee’s plan, released in 1880, envisioned North Broad Street as an elegant boulevard lined with mansions and luxury apartment houses. Of course that would require a separation of the street and railroad grades above Callowhill Street. Fortune favored the City in its discussions with the Reading Railroad as it was seeking the City’s approval for permits to allow it to construct the Reading Terminal on Market Street. An agreement was reached and the project proceeded. The Reading Terminal and its head house were completed in 1893. Widener and Elkins built their mansions facing each other on Broad Street at Girard Avenue and soon other Gilded Age tycoons joined them. Surviving examples include the Divine Loraine Hotel and the Burk Mansion. The depressed railroad line linked the Reading Railroad’s lines along the Schuylkill River with Reading Terminal and the Reading’s 9th Street line leading from the Terminal northward to Wayne Junction, the center of its operations in Philadelphia. The Reading Railroad even agreed to elevate its 9th Street line all the way back to Wayne Junction, truly a pharaonic undertaking for a company flitting in and out of bankruptcy in the 1890s. 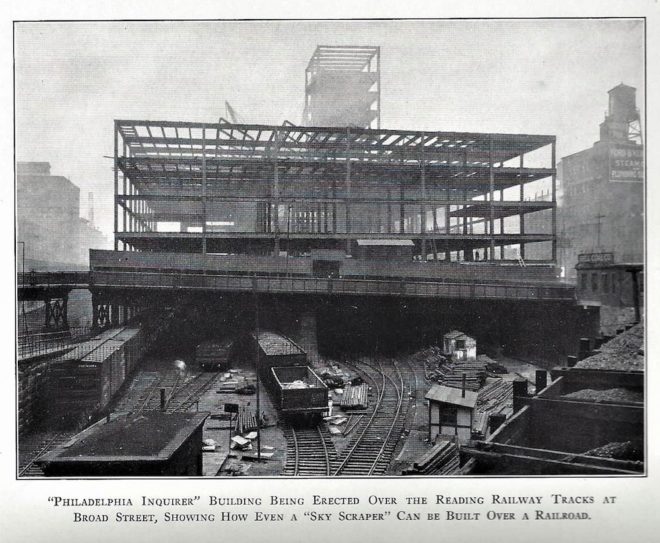 The Reading Railroad sold some of its regraded property as sites for rail-dependent uses, notably to the Philadelphia Inquirer to construct its Elverson Building (aka the Tower of Truth) at 400 N. Broad Street, designed by Rankin, Kellogg and Crane and completed in 1924. The rail company also sold the site that would become the Lasher Printing Building at 1309 Noble Street, which was designed by Philip Tyre and completed in 1927. The Reading Railroad constructed its own Terminal Commerce Building at 401 N. Broad Street. The 13-story structure reputed to be the largest warehouse, showroom, and office building of its kind in the eastern United States. It was designed by William Steele and Sons, completed in 1930, and had a railroad freight station in its basement. 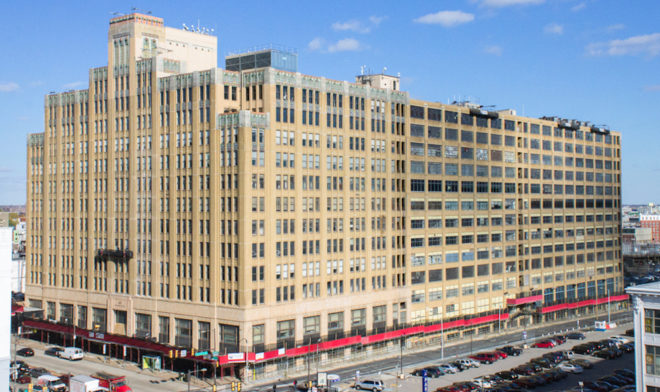 After completion of the Pennsylvania Avenue Subway project, the Reading Railroad referred to the branch west of Broad Street as the City Branch, and the at-grade lines east of Broad Street as the Willow and Noble Street Branch. Construction of the interstate highway system, overzealous regulation, and the flight of industry out of loft buildings led to the Reading Railroad’s 1973 bankruptcy. The City’s redevelopment efforts, notably the Callowhill East Urban Renewal Project, resulted in massive site clearance that eliminated most what had been the Reading Railroad’s customer base on the Willow and Noble Street lines. The construction of I-95 severed its remaining connection to the waterfront at Vine Street. 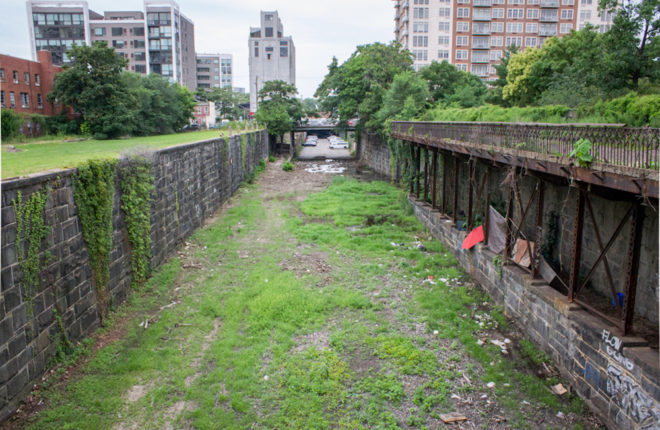 A cut of the City Branch line next to Community College of Philadelphia stills sits unused. | Photo: Michael Bixler

On the City Branch, the Philadelphia Inquirer remained the lone customer until relocating its printing plant to the suburbs and thus ended any reason for its owner, Conrail, to maintain it.  There has been talk for years about folding the abandoned rail line into the Reading Viaduct project and potentially reviving it as linear parkland.