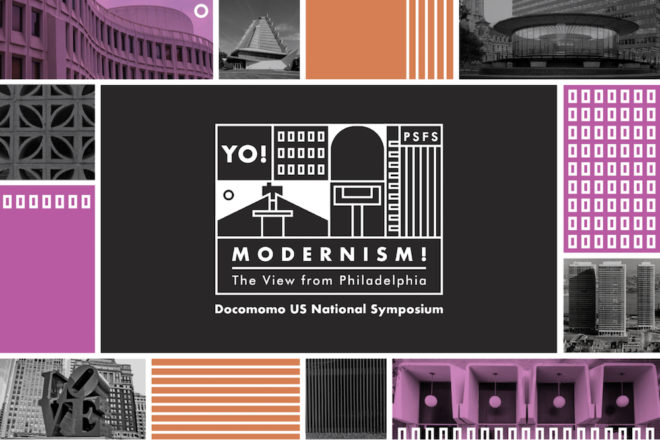 Philadelphia’s national image is embodied by the Liberty Bell and Independence Hall. For outsiders it is easy to digest the city’s Colonial past, while overlooking the dense history and architecture of other eras. This month visitors will join locals to celebrate Philadelphia’s rich, often surprising, contributions to Modernism when Docomomo US hosts its 2022 national symposium here.

“When I think of Philadelphia I think of America’s first skyscraper, the PSFS building,” said Liz Waytkus, executive director of Docomomo US. “For us, it’s like a homecoming.” The organization is considered a committee of a broader body, Docomomo International, founded in the Netherlands in 1988 to document and preserve Modern architecture. The mission has since spread to over 70 countries. “In the 1980s there were projects all over the world that weren’t eligible for preservation status,” Waytkus said. “There was not enough understanding about their value.” 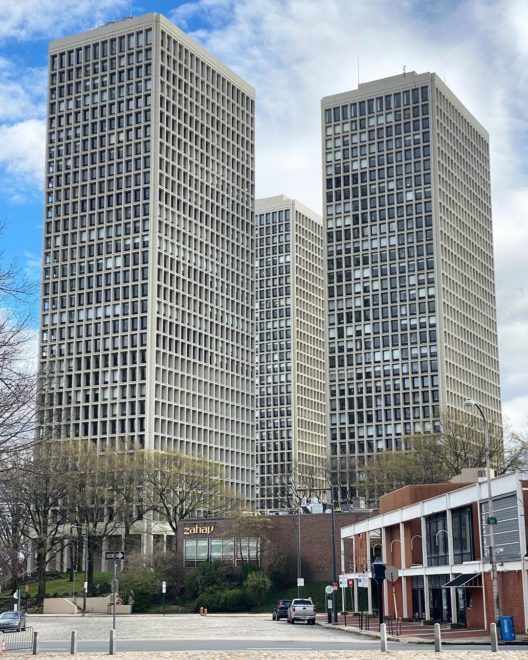 Docomomo US is happily open-ended on a number of fronts. When it comes to identifying buildings of interest, “We don’t necessarily define what ‘modern’ means,” Waytkus noted. “We do not look through a lens of a time period or style, but see it as an aesthetic value.” The organization’s membership is varied, too, consisting of roughly equal numbers of professionals in the architecture, historic preservation, or academic fields and enthusiasts who just love Modernism, including some who own midcentury homes. “That is what makes Docomomo US different from other chapters around the world,” she explained. When the 2022 symposium opens on May 31 organizers expect a similar mix of attendees.

Yo! Modernism: The View from Philadelphia will feature a full schedule of talks and tours that show off the midcentury side of our city. Visitors with preconceptions of Philly will be surprised as locals may be as well. “It’s a great opportunity for those who live in the city to get a fresh perspective through the fresh eyes of visitors,” said William Whitaker, curator of the Architectural Archives at the University of Pennsylvania and president of the Philadelphia Chapter of Docomomo US (Docomomo PHL) 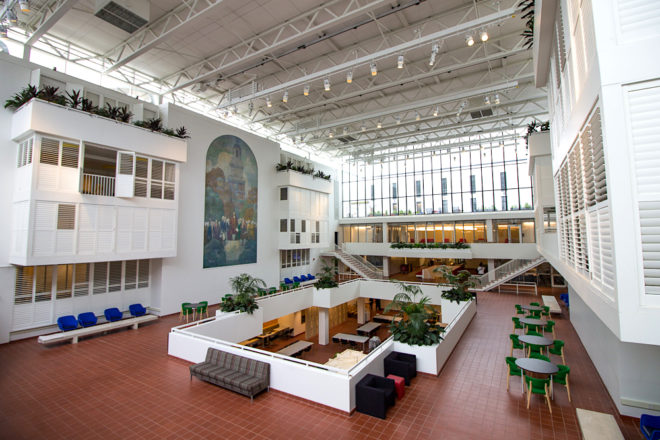 Light bathes the atrium of Hill College House on the campus of the University of Pennsylvania. Finnish-American architect Eero Saarinen designed the space to create the bright, airy sensation of a piazza. | Photo: Michael Bixler

Whitaker attributes Philadelphia’s importance in the development of Modernism to the pragmatism of the City’s administrations in the 1950s and 1960s. “We had people thinking about redevelopment that integrated with the past and what was already there. In a sense, it made Modernism real.” “It’s integrated into the built fabric,” Waytkus concurred.” “There are some interesting lessons learned, especially in Philadelphia’s downtown area.”

The symposium opens with a panel discussion and tour of the Hassrick House in East Falls, designed by Richard Neutra in 1958. The home is now owned by Thomas Jefferson University and the presentation, hosted by the school’s Center for the Preservation of Modernism, will discuss conservation techniques and issues in preserving Modernist buildings. 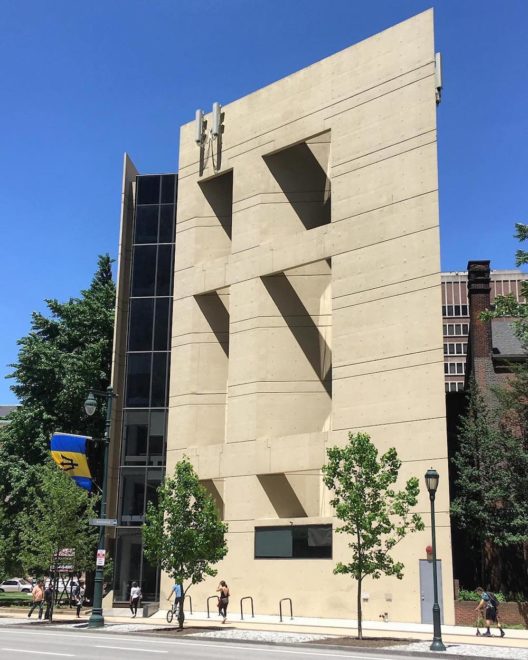 The full program spans May 31 through June 5 with panel discussions, academic paper presentations, and tours focusing on Modern architecture, history, landscape design, and preservation. Philadelphia as a walkable city is particularly highlighted through tours on foot around Center City, Society Hill, the Benjamin Franklin Parkway, and the campus of the University of Pennsylvania. The latter takes an inside look at two examples of successful renovations of midcentury university buildings: Eero Saarinen’s Hill College House dormitory and Richards Laboratories, designed by Philly’s own master of Modernism Louis Kahn. Both buildings are typically not open to the general public. “We’ll tour with the architects who dealt with the restoration while keeping the use–a dormitory and a research building—in mind,” said Whitaker. 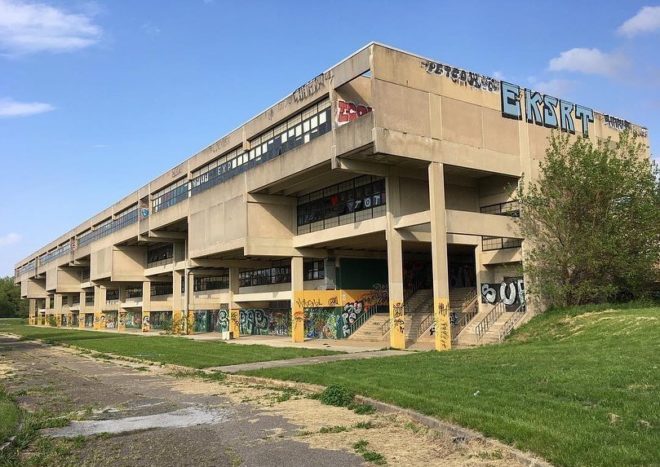 George Pepper Middle School in Eastwick was planned and designed in 1968 by Texas-based architecture firm Caudill Rowlett Scott and Philadelphia engineering firm Ballinger. The school was not completed until 1976 due to consistent construction delays by the Philadelphia Art Commission over design criticism. | Photo: Michael Bixler

The subjects and tours won’t be confined to the city’s limits. Philadelphia’s Modern architects spilled out into the surrounding region with their work, and the symposium will feature iconic examples, including a tour of Frank Lloyd Wright’s only synagogue, Beth Shalom in Elkins Park, homes designed by Louis Kahn and Oskar Stonorov that dot the Chester County countryside, and the studios of midcentury craftsmen Wharton Esherick and George Nakashima. Other events are a tad unconventional. Hidden City’s managing editor (and Docomomo PHL board member) Michael Bixler will lead a walk around the abandoned George Pepper Middle School in Eastwick. Whitaker, with architect Joel Levinson, will host a bus tour of Modern architecture on the Main Line. “The things that we drive by every day,” Waytkus said. “Have people ever looked at the built environment, its history, who designed it?” 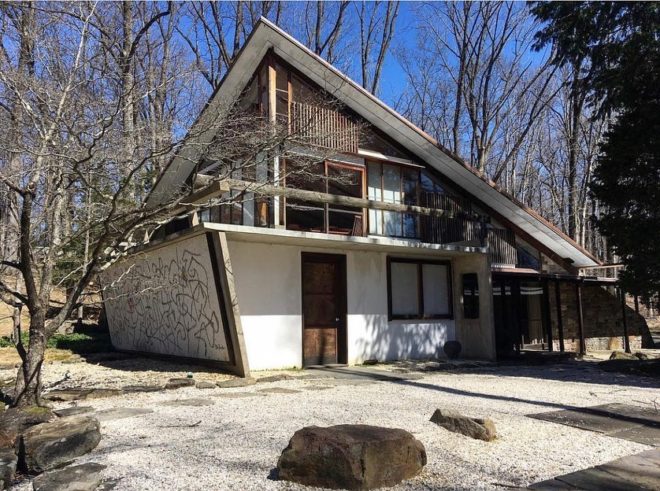 The George Nakashima house, studio, and workshop in New Hope, Pennsylvania is a midcentury sight to behold. | Photo: Michael Bixler

While the tours and discussions of particular buildings have a mostly celebratory tone, Philadelphia Inquirer architecture critic Inga Saffron will add a touch of sobering realism. “She’ll reflect on the forces that are shaping what is going on today in development and preservation and where the money is being spent,” noted Whitaker. Saffron will be joined by Michael J. Lewis, architecture critic for the Wall Street Journal, in the keynote address on June 1, aptly titled “The Past Informs the Future / The Present Challenges the Past.”

Even as Docomomo celebrates and advocates for Modernist buildings, the organization acknowledge the realities of real estate pressures and the economic needs of cities in the 21st century. “How do you work with heritage in a responsible way, while knowing that change is inevitable?,” Whitaker said. When factoring in issues surrounding climate change, Waytkus feels the organization must broaden its approach when advocating for preservation. “There needs to be a robust argument within preservation about sustainability.” 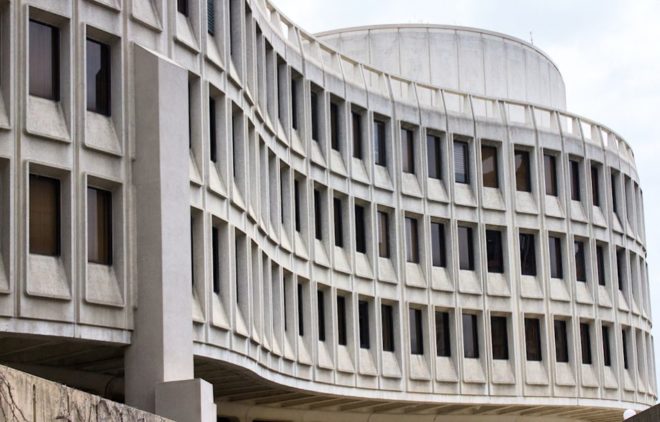 The former Police Administration Building (aka the Roundhouse) at 750 Race Street was completed in 1962 and designed by Geddes, Brecher, Qualls and Cunningham. | Photo: Michael Bixler

The symposium comes to Philadelphia as the city considers the fate of one of its most dynamic examples of Modernism, the former Police Administration Building, known as the Roundhouse, at 7th and Race Streets. The sculptural, concrete building will figure several times in the event’s schedule and coincides with a recent nomination to the Philadelphia Register of Historic Places that was prepared and submitted by local chapter Docomomo PHL. Symposium attendees will hear presentations by Jack Pyburn, a architectural historian who has studied the Roundhouse for decades, and Carl-Dag Lige from the Estonian Museum of Architecture, who curated an exhibit there about the Roundhouse’s revolutionary use of a then-new precast concrete technology called Schokbeton. There will be a explorative session about how the building’s police-related past can or should impact its future. The Roundhouse will also be featured in a walking tour of examples of the urban renewal work in the 1950s and 1960s by city planner Edmund Bacon (and others) under the mayoral administrations of Joseph Clark and Richardson Dilworth.