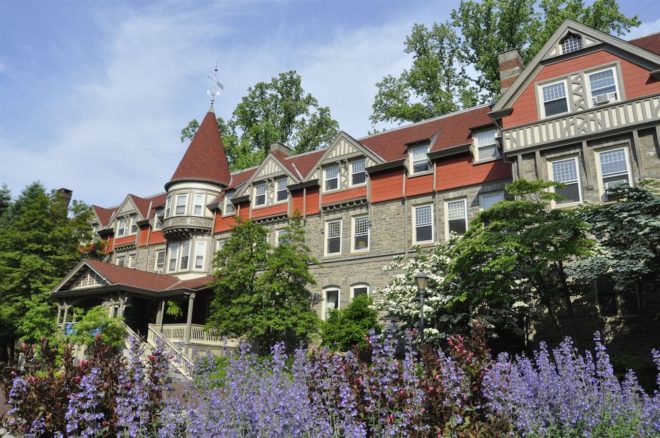 “Enough is never enough,” Henry H. Houston allegedly once said. After making his first fortune in railroads, oil, and gold mines during the Civil War, the 19th century industrialist transformed himself into a developer. Houston’s ambition? To turn pastoral farmland northwest of Philadelphia into a cash crop. Instead of raising corn or sheep, Houston wanted to raise real estate prices and create an enclave for those who shared his values: wealth of the Episcopalian sort.

In the 1870s he bought 3,000 acres that stretched from West Allens Lane in Mt. Airy to Ridge Pike in Andorra and to Butler Pike in Montgomery County, making Houston the largest landowner in Philadelphia. At the time, Philadelphia’s elite had already built castle-like summer estates on the Main Line and in Germantown where Houston resided. These areas were accessible by train. Chestnut Hill was not. 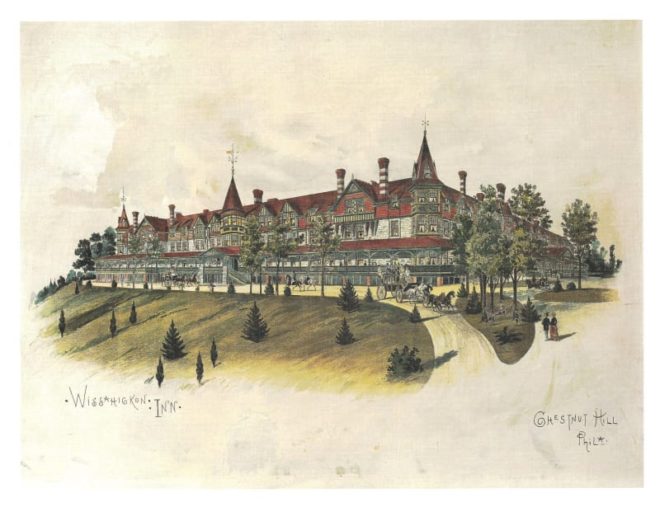 An illustration of Wissahickon Inn shows the hotel in its entirety. Date unknown. | Image courtesy of Springside Chestnut Hill Academy

To attract potential buyers, Houston hired some of Philadelphia’s foremost architects at the time, G.W. and W.D. Hewitt, to design the Wissahickon Inn--a sprawling 250-room summer resort hotel on W. Springfield Road between St. Martin’s Lane and Cherokee Street. Two previous hotels had occupied the site, but neither were as lavish as Houston’s monument to the Gilded Age. Constructed in a U-shape in the Queen Ann style and built of Wissahickon schist, the inn had wraparound porches, porte cocheres, multi-paned windows, a red roof, and dramatic turrets. Its dining room featured murals by Violet Oakley, an acclaimed muralist of her day. The Wissahickon Inn opened in 1884. That same year, Houston made sure that a spur of the Pennsylvania Railroad arrived at the hotel’s door.

In 1884 Houston also founded the Philadelphia Cricket Club across from the inn. The club eventually created one of the city’s first private golf courses and added tennis courts. 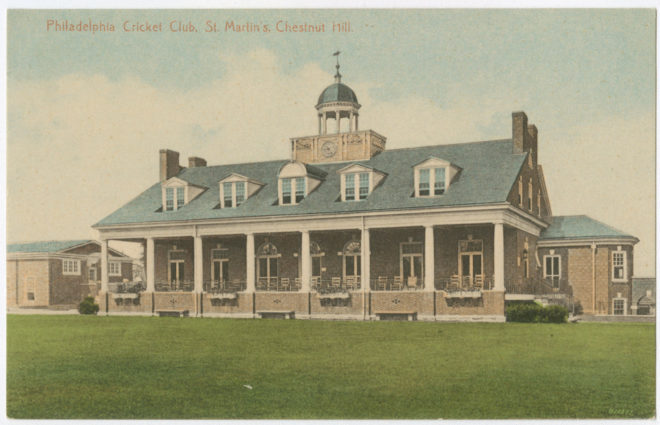 A postcard from 1910 shows the new clubhouse of the Philadelphia Cricket Club and St. Martin’s, the women’s clubhouse. Designed by Geroge T. Pearson, the buildings were built on the same grounds as the original clubhouse, designed by G.W. & D.W. Hewitt, that burned down in 1909. | Image courtesy of the Library Company of Philadelphia

To encourage high rollers to follow him to Chestnut Hill, Houston moved to Chestnut Hill in 1886. His estate, Druim Moir, was a 30-room Norman Gothic mansion designed by G.W. and W.D. Hewitt at the intersection of Cherokee Street and Willow Grove Avenue. Houston’s investment paid off. He soon sold off 80 parcels of land at an impressive profit, including his gains as a developer constructing mansions, stables, and carriage houses on each estate.

In 1889, Houston added what was to become the heart of his community, Saint Martin-in-the-Field Episcopal Church, also conveniently located walking distance from his inn and home.

The blue stocking set came to the hotel to stay for weeks or the entire summer from as far as England and Canada. They swam in the Wissahickon Creek, hiked the hills, and rode horses. 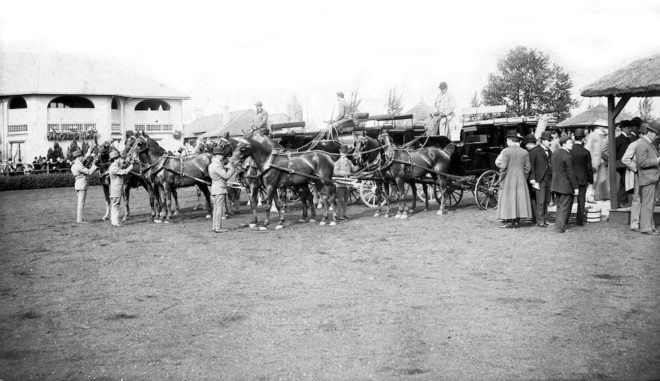 Beginning in 1892, the inn hosted the annual Philadelphia Horse Show for 16 years. Houston constructed a viewing stand that seated 2,500 people, as well as 125 stables and 140 stalls. Over the years the crowds grew and reaching 10,000 visitors at the event’s peak.

By the late 1890s, the inn was beginning to experience a decline in occupancy. Newly expanded railroad lines offered new vacation spots along the New Jersey coast, and the rich were placing their bets on areas further away from Philadelphia. There was also a decline in the popularity of cricket, and the Philadelphia Horse Show held its last event in 1908.

However, the inn had achieved Houston’s primary goal, which was establishing Chestnut Hill as an exclusive enclave and, more importantly, ensuring generational wealth for his heirs. When Houston died in 1895 he left a trust for his family valued in 1964 at $145 million. 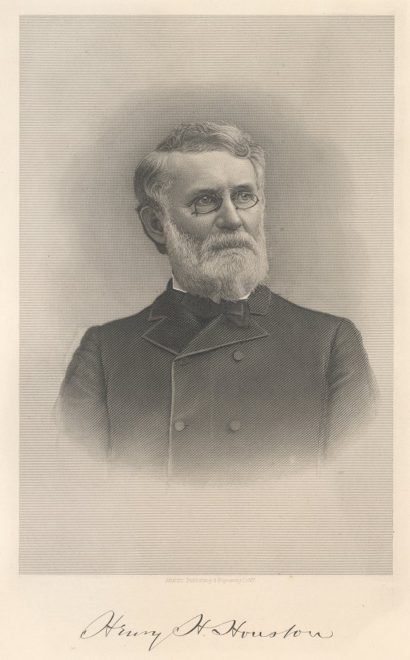 A signed portrait engraving from the 1880s of Henry H. Houston. | Image courtesy of Penn Archives, University of Pennsylvania

This motivated Houston’s heirs to invite Chestnut Hill Academy (CHA), a private boarding school for boys founded in 1850, to occupy the inn during the off season at no charge. At the time, CHA had outgrown its school building at 8030 Germantown Avenue and was looking for a larger space. The school and the inn shared the building for two years. In 1900, the Houston’s family decided to close the inn, enabling CHA to take over the entire building year-round.

Changes were made to the interior and exterior of the former hotel, including converting its dining room into the library. Oakley’s mural, depicting the biblical figures of Solomon, David, and Jesus Christ as boys, was restored. The inn’s ballroom was repurposed in 1905 as a chapel with stained glass windows designed by Willet Stained Glass of Chestnut Hill. The inn’s swimming pool was covered with floorboards for the school cafeteria.

During CHA’s boarding years, students came from 32 states and 14 countries, including the Prince of Siam. Boarding students resided on the third floor of the inn. In 1934, the school closed its boarding department in response to the Great Depression. 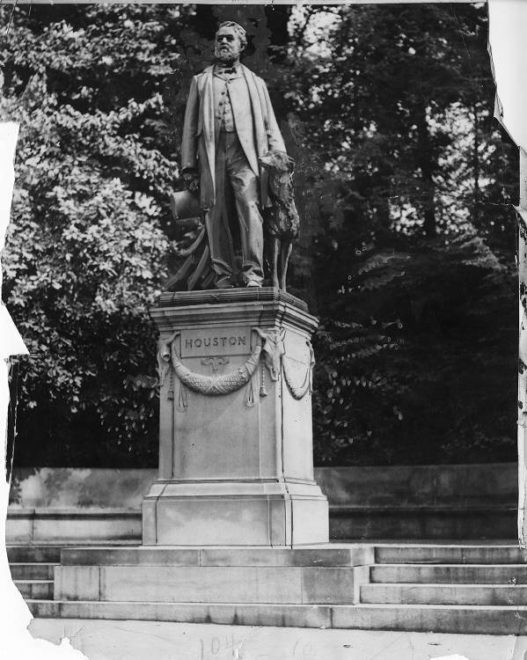 The Henry Houston statue at Harvey Street and Lincoln Drive was installed in 1900 and designed by sculptor John Massey Rhind. Pictured here is the monument in 1925. | Image courtesy of Special Collections Research Center, Temple University Libraries

In the 1960s, the school began to share educational and recreational resources with the nearby Springside Academy for Girls, founded in 1879 on Norwood Avenue and now located next to Houston’s Druim Moir. The mansion’s stable was repurposed into storage space for the school and its former carriage house is one of the school’s administration buildings.

In the 1970s, classes became coeducational at both institutions. In 2011, the schools combined and were renamed Springside Chestnut Hill Academy. The combined campuses currently cover 62 acres. While much of the original architecture remains, many new buildings have been added on the ground of the former inn, including a performing arts center, a athletic complex, a science center and a stadium. 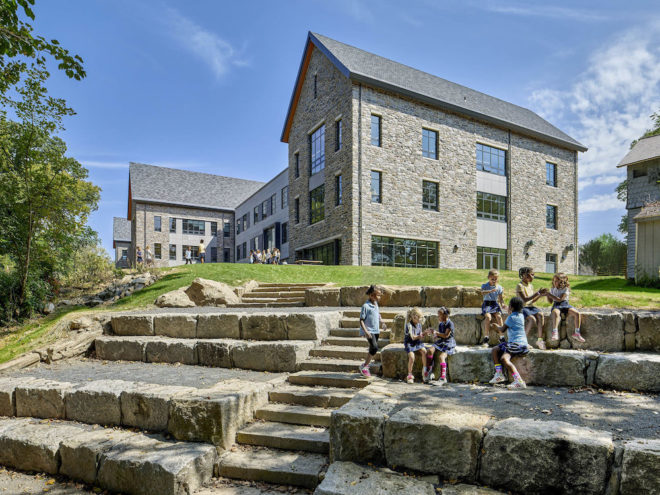 If Houston were alive today, he would not be disappointed. His planned community, Chestnut Hill, has the highest annual household incomes in Philadelphia. His Druim Moir estate still stands, converted into a posh condominium, and a bronze statue of Houston continues to attract visitors to the southeast corner of Harvey Street and Lincoln Drive at the edge of Houston’s beloved Wissahickon Woods to which he donated generously.

For further reading see The Lure of the Wissahickon Inn by Paul Hines, a former Springside Chestnut Hill Academy teacher.