Editor’s Note: A version of this story was published in the Spring 2022 issue of Extant, a publication of the Preservation Alliance for Greater Philadelphia. 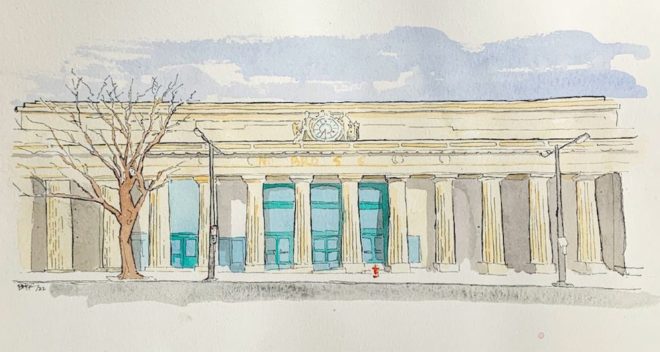 In the 1920s, when the Broad and Lehigh neighborhood hummed with manufacturing, North Philadelphia was a hub for rail lines serving the industries. Now, though shells of abandoned factories dominate the streetscape, the Reading Railroad’s North Broad Street Station still conveys the grandeur of that bygone era, its stately faccade of Indiana limestone and pink granite, broad colonnade of 30-foot-high Doric columns and magnificent clock flanked by Hermes and Chronos–gods of travel and time–all intact. In designing the station, Horace Trumbauer and Julian Abele, the first African American graduate of Penn’s School of Architecture, brought the Classical Revival style they had used for the Philadelphia Museum of Art to street level. Today, this reminder of North Philadelphia’s once bustling transportation infrastructure serves as transitional housing for the homeless, its sumptuous interior of chandeliers, marble floor, and bronze medallions long gone. Like the Pennsylvania Railroad’s French chateau-inspired station (now a shopping strip) a few blocks north, North Broad Street Station, though listed on the National Register of Historic Places, merits protection on the Philadelphia Register as well.