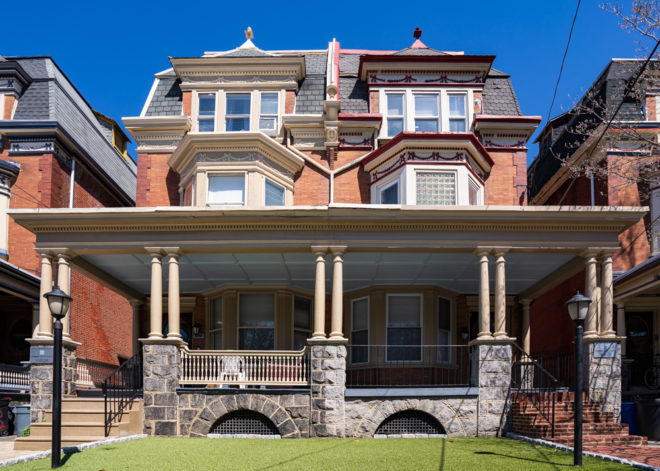 A set of twins within the new Drexel-Govett Historic District in West Philadelphia. | Photo: Michael Bixler

Two historic districts, with over 100 buildings, were added to the local register, and efforts to protect a mid-century bank building were rejected during the Philadelphia Historical Commission’s April meeting.

The Drexel-Govett Historic District is the largest historic district to be added to the Philadelphia Register of Historic Places since the 2019 addition of Overbrook Farms. The new district is comprised of 95 structures, most of which are active residences, in the Spruce Hill and University City area of West Philadelphia. The district contains mostly Queen Ann and Second Empire twins. The nomination, submitted by the University City Historical Society, passed by unanimous consent and covers the 3900 blocks of Delancey Street, Pine Street, and Baltimore Avenue, and structures along the 300 and 400 blocks of S. 40th Street.

The district is named after two influential speculative developers who helped to shape West Philadelphia into a “Streetcar Suburb” by building to satisfy the growing demand for middle class housing. As the nomination states, “Given the strong representation of the earliest two periods of significance [Italianate and Second Empire] on the local register, the omission of the Anthony J. Drexel and Annesley Govett speculative development projects along the 3900 blocks of Baltimore, Pine and Delancey is surprising.” Large swaths of the surrounding blocks were demolished during the two expansions of the University of Pennsylvania’s campus in the late 1950s and 1960s. These surviving buildings display an impressive amount of historic fabric, relatively few alterations, and still serve their original, residential purpose.

Approval of the new historic district is especially timely given the permits pulled by developer Guy Laren to demolish seven structures at 245 to 257 South 44th Street and replace them with new construction. 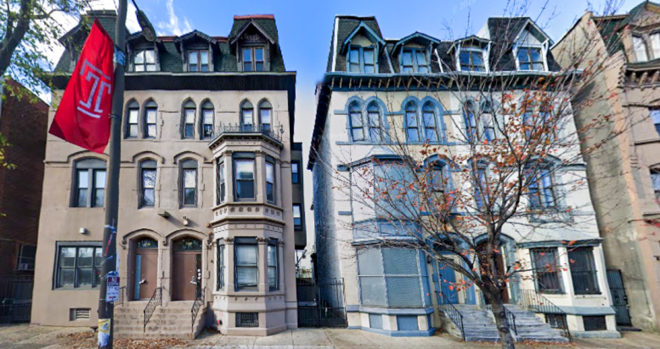 Another new district was approved by the Historical Commission, the Conwell House Block Historic District, which is centered around the historic Conwell House in North Philadelphia. It contains seven properties that were originally part of four, four-story Second Empire townhouse twins on North Broad Street. The buildings are mainly brick and wood structures with straight, mansard roof lines built between 1862 and 1895 and follow an A-B-B-A architectural rhythm.

Beyond preserving intact historic fabric of “commercial vernacular of the period rather than high design,” the nomination sought to honor “ the central actor in an evangelical network that extended throughout the city and played a crucial role in the religious and social history of Philadelphia.”

While Russel Conwell helped found what would become Temple University, he is well known as the figurehead of Grace Baptist Temple and the author of the widely popular “Acres of Diamonds” sermon, a core American Prosperity theology text. Conwell’s promotion of a “total ministry” prefigured today’s megachurches and continues to influence evangelical thinking. The historic district was nominated by the Preservation Alliance for Greater Philadelphia and was added to the local register by unanimous consent. 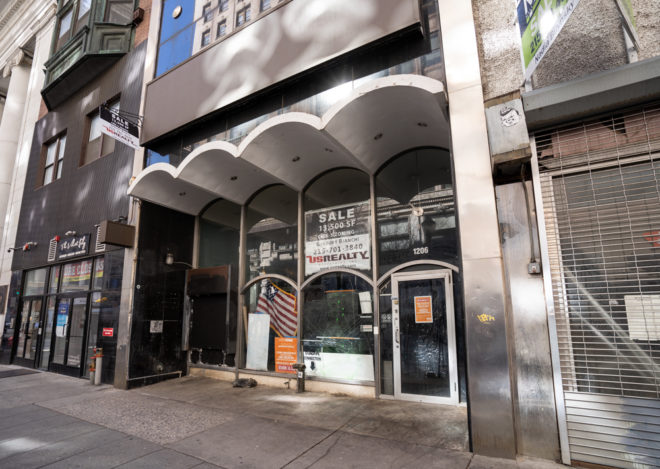 A nomination for the Colonial Federal Savings and Loan building, a striking, mid-century modern structure with a distinctive, black marble facade attached with metal “thumbtacks,” returned to the Historical Commission this month for debate. First discussed at the meeting in March, the nomination was vehemently opposed by the owners’ lawyers, who argued that the building could not be developed profitably due to the limited use caused by its almost windowless design. In the interim, the Preservation Alliance, the building’s nominator, met with the owners to discuss an adaptive reuse solution. The Preservation Alliance presented multiple reuse proposals, including various commercial uses, overbuild possibilities, removing and installing the facade elsewhere, or even replacing the black marble with dark tinted glass. The owners, represented by a lawyer, a historian, and an economist, argued against these potential options on the basis of difficulty and cost and threatened to pursue an economic hardship hearing if the nomination was approved.

Public comments at prior meetings were overwhelmingly in support of designation, with many attendees expressing the need to protect Philadelphia’s threatened mid-century structures, many of which have already been destroyed for new development. Commissioner Emily Coopermen, as well as several members of the public, expressed concern at this month’s meeting that the owners had been given a disproportionate amount of time to present their case simply because they had the money to retain experts and lawyers. Ultimately, the nomination was rejected by the Historical Commission, with six votes against and three in favor. 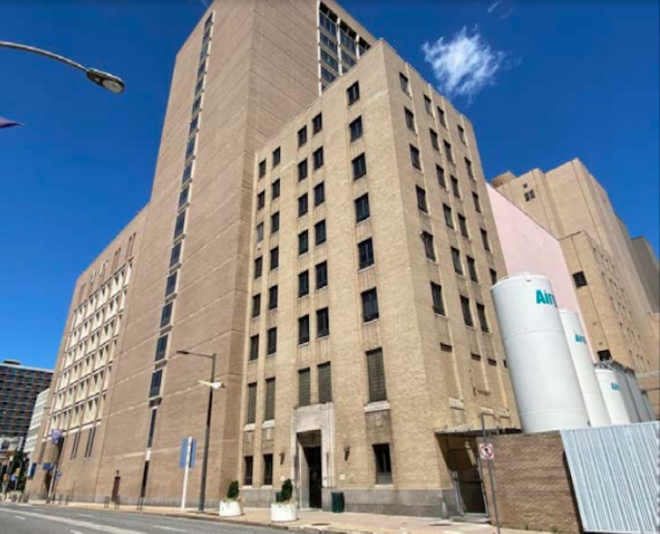 Oscar Beisert of The Keeping Society of Philadelphia nominated Klahr Auditorium of Hahnemann Medical College, which was designed by Horace Trumbauer, the prominent self-taught Philadelphia architect who designed scores of buildings in Philadelphia and the surrounding suburbs. The seven story building was constructed in 1938 of limestone and buff brick and has a subdued Art Deco facade. The auditorium was built as the wing of a larger construction plan that never materialized, and it was gradually absorbed into a larger building complex. The auditorium is believed to be the last commission that Trumbauer worked on before his death in 1938. It was constructed during a time of great growth in Philadelphia’s medical education industry, which the nomination describes as a period of “incessant building.” Hahnemann Medical College, a school with a “non-elite background” and “homeopathic roots,” sought to claim its position in the medical education community with a new building in a contemporary, expressive style. The Great Depression slowed the institution’s growth, but the project was finally funded in 1938 when Mrs. Emilie Foster Klahr, the widow of Philadelphia hardware magnate Lewis W. Klahr, donated $200,000 for the auditorium.

The owners of the building did not oppose nomination, but did raise concerns, reflected in amendments to the nomination–, hat the auditorium building is no longer a free-standing building. Khlar Auditorium was added to the local register by unanimous consent.

32 Manheim Street before and after demolition. | Photos: Google Street View

The staff of the Historical Commission submitted an application to reclassify 32 Manheim Street, a vacant lot in Manheim Square Historic District, from non-contributing to contributing on the grounds of archeological merit. The house, constructed before 1834, was demolished by the City in 2017 due to unsafe conditions. Beisert, the author of the neighborhood’s historic district nomination, spoke in favor of this reclassification, expressing that the Mannheim community was supportive and excited about both the designation and reclassification. Beisert explained that the neighborhood has long suffered from absentee and negligent landlords and that the reclassification of the demolished building’s lot would allow what remains of the area’s historic fabric to be maintained. Commissioner Cooperman expressed her support, saying “Archeology is the only record for people who have no written record.” While there was debate among Historical Commission members about a possible overstep of their authority, the reclassification ultimately passed with seven in favor, two abstentions, and two opposed. 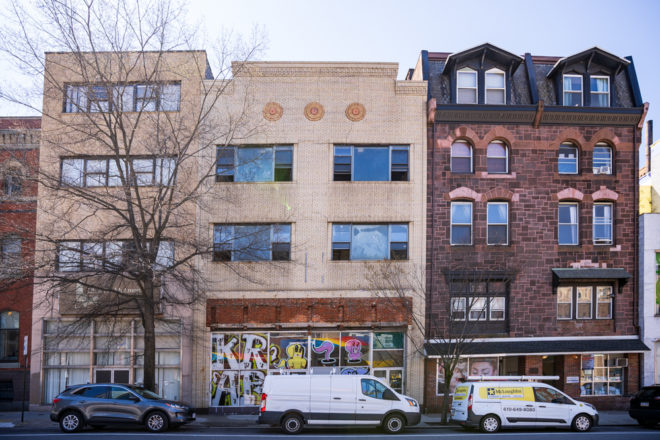 A reclassification submitted for 2204 Walnut Street sought to change the building’s status from contributing to non-contributing within the Rittenhouse/Fitler Residential Historic District. The reclassification was submitted to the Historical Commission by Janice Woodcock, architect and co-founder of RePoint, a political action committee focused on historic preservation, on the basis of errors in the building’s initial entry in the Philadelphia Register and the fact that it is not a residential building. 2204 Walnut Street was built in 1869 and was originally part of a row of townhouses commissioned by Henry Ashurst. It was altered in 1892 by architect Wilson Eyre when Chestnut Street was widened for the new bridge over the Schuylkill River. The building was overhauled again in 1900 for the Holman School for Girls.

There was a lengthy public comment period where many attendees spoke against the reclassification, stating that, although the district’s theme is primarily focused on residential buildings, it also includes and protects structures that support residential life like storefronts and other commercial buildings. Despite public concerns the Historical Commission voted unanimously to reclassify the building as “non-contributing,” thus losing its legal protection from demolition. 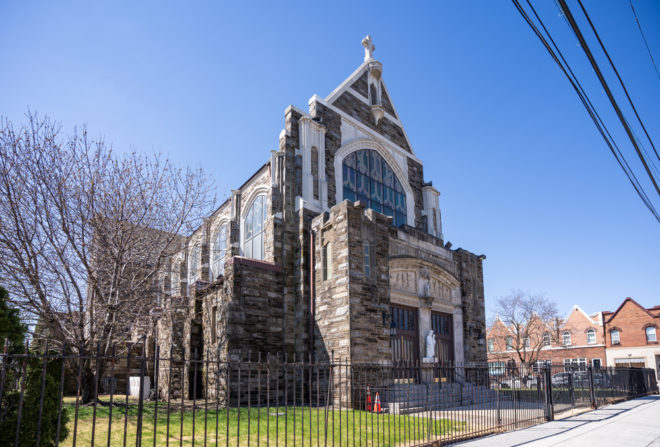 Our Lady of Mount Carmel Roman Catholic Church in the Whitman neighborhood of South Philadelphia was nominated by Celeste Morello. The stone church was built in 1923 and designed by architect Charles J. Mitchell in an unusual “blunt Gothic” style with strong Tudor elements. The building was constructed with a cruciform plan and impressive gothic arches. The church’s most notable feature is its projecting vestibule with highly distinctive sculptural panels. In her nomination Morello described it as “a two-panel relief relating a history of the Carmelite Order and then, the contemporary news of two Carmelite nuns, one just canonized, and one awaiting canonization.” This level of sculptural detail is highly unusual for the time of the church’s construction and is unusual for Philadelphia. It speaks to architect Mitchell’s membership in the “T-square Club,” an origination that facilitated collaboration between visual artists and architects. The nomination was passed unanimously. 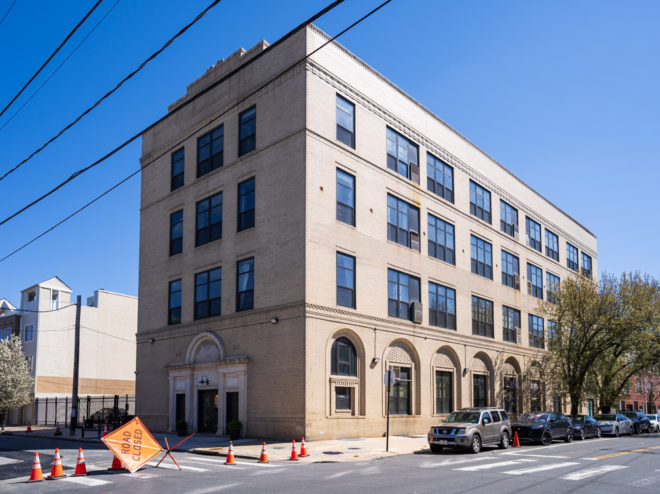 The former St. Mary Magdalen de Pazzi Catholic School at 6th and Christian Streets, built in 1927 and designed by architecture firm Horrman-Henon, was also nominated by Morello. The four-story building is Romanesque in nature and has remained mostly unaltered. The textured and decorative pale gold bricks are notable, especially the areas of distinctive, basket-weave brickwork that surround the rounded arches. Horrman-Henon primarily designed movie theaters, like the demolished Boyd Theater movie palace on Chestnut Street, but the firm also had a close relationship with the Archdiocese of Philadelphia.

625 Christian Street was built to house the school associated with St. Mary Magdalen de Pazzi parish, a Roman Catholic church in Bella Vista. The school was bilingual and included Italian traditions in its curriculum. The nomination was passed by unanimous consent. 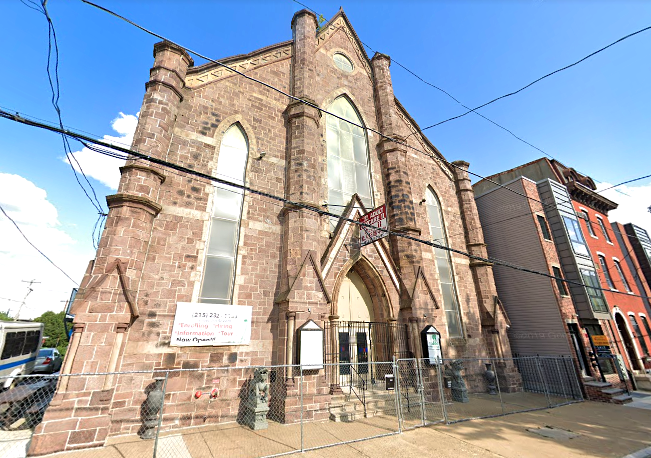 Trinity Reformed Church at 1533 N. 7th Street was nominated by Beisert of The Keeping Society of Philadelphia. The Gothic Reform-style church was designed by prominent Philadelphia architect Samuel Sloan and built between 1869 and 1872. The building was constructed mostly of Trenton brownstone. It has four distinctive towers delineating the bays of the primary and gable-fronted buttresses. The elegant building is an “inexpensive, but expressive gothic ecclesiastical architecture” according to the nomination and is representative of urban houses of worship for religious communities of modest means. Beisert underscored the importance of protecting the building, noting that the church is located in an area that has experienced a significant loss of historic fabric due to demolition. Although the building’s owner opposed the nomination, who spoke at length about the degraded quality of the site, Trinity Reformed Church was added to the Philadelphia Register by unanimous consent.